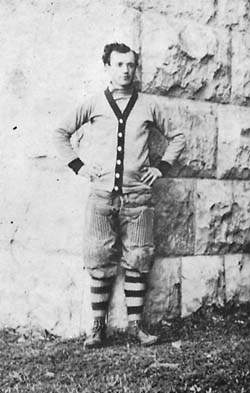 Today, Baylor University’s football team is a member of a powerful regional athletic conference. It trains in state-of-the-art practice and conditioning facilities and competes before tens of thousands of fans in Floyd Casey Stadium. It’s difficult to imagine how different things were more than 110 years ago when the first intrepid Baylor athletes picked up a pigskin and prepared to do battle.

During Baylor’s first dozen or so years after moving to Waco in 1886, the administration was wary of the rough-and-tumble game of football that was spreading like wildfire from one college campus to another. By 1894, other prominent Texas schools such as the University of Texas and Texas A&M were fielding teams. But Baylor’s faculty –– including President Rufus C. Burleson –– were not convinced that creating a team at the state’s premier Baptist university was prudent.

Burleson became Baylor’s president emeritus in 1897. During the next two years, as trustees searched for his permanent replacement, the movement to bring football to Baylor gathered momentum. Interested faculty and students formed an athletic association at Baylor in January 1898.

When trustees elected Oscar Henry Cooper as the new president the following year, they hired a leader who believed that college football could be a good thing. Just two days after Cooper delivered his inaugural address on Sept. 6, 1899, the Baylor Athletic Association (with Cooper’s blessing) appointed a committee to hire a football coach and organize a team.

On Oct. 19, 1899, Baylor’s new football squad played its first game –– probably more like a scrimmage –– against Toby’s Business College. The small commercial preparatory school also was located in Waco. Although they were most likely eager to compete, the men who lined up against each other that fall day were a far cry from today’s football players.

The earliest football teams wore uniforms that carried little or no padding or other protection. Helmets, if worn at all, often were barely more than thin caps made of leather. But what’s not so widely known is how much smaller and lighter football players were back then.

On that first team Baylor fielded, the players weighed an average of slightly more than 170 pounds. That’s no misprint –– 170 pounds. The heaviest Baylor player — the biggest man on the line — didn’t even top 200 pounds, weighing just 196. The smallest Baylor player tipped the scales at an anemic 136 pounds. Despite all this, Baylor held an advantage over the poor Toby’s College players, whose average weight was only about 150 pounds.

By contrast, according to the 2010 football roster, 11 Baylor players top 300 pounds. The heaviest tips the scales at 340 pounds, twice the average player’s weight in 1899.

Baylor won its first football contest against Toby’s, 6-0, and would go on to defeat them again the next month, 20-0. Between those games with Toby’s, Baylor initiated what is now its oldest surviving football rivalry (with TCU) by playing Add-Ran College. The result was a scoreless tie in a game on the Baylor campus before a large crowd.

As it has so often during the past 111 years, Texas A&M University refused to play nice, meeting Baylor during the final game of its inaugural season and handing the young team its first loss by a score of 33-0. The Waco Times-Herald tried to put the game in a positive light by reporting that, “For an eleven many of whose players did not know the shape of the oval until this season, Baylor put up a fair exhibition.”

During that first season, Baylor’s team was not known as the Bears because the university had no official mascot. Local newspaper accounts, for reasons I have not been able to discern, most often referred to the team as the Baylor Bulldogs. But every now and then they were referred to in print simply as the Baptists.

Baylor wouldn’t adopt the bear as its official mascot until 1914, after students chose the name in a campus vote. If another one of the suggested choices had garnered more votes, we could now be cheering for the Baylor Buffaloes, Antelopes, Frogs, Ferrets or (this is the real fear-inducer) the Baylor Bookworms.

After its inaugural year of play, Baylor began adding new gridiron rivals, such as Austin College in 1900 and Oklahoma and Texas in 1901. In 1902, a new football home called Lee Carroll Field was built on the Baylor campus, about where the Bill Daniel Student Center now stands.

The athletic field greatly improved playing conditions, although it began as a somewhat primitive sports facility. Before a fence was built around the complex in 1905, fans would simply stroll up to the edge of the field to watch a game. Or they’d sit atop their horses or carriages on the sidelines for a better view. A grandstand wasn’t added until 1915.

At some point after the fencing was erected, Carroll Field’s turf was kept in shape thanks to a small herd of sheep. Instead of trying to keep the grass cut with a mechanical mower, Baylor officials allowed the sheep to graze at will when the field wasn’t in use. A newspaper account reports that once a pack of wild dogs apparently broke through the fence at night and killed all the sheep. This required Baylor students to take over lawn maintenance duties, at least temporarily.

Baylor’s teams kept getting more experienced each year. But before the 1906 season got under way, the university’s football fans were dealt a shocking blow. On May 29, Baylor trustees granted President Samuel Palmer Brooks’ request that football be banned on campus. Among the reasons given: Football games included unnecessary roughness and there was a growing tendency for teams to use foul play to win.

After they heard the news, Baylor students used their collegiate gift for satire to hold a mock funeral on campus to “bury the pigskin,” interring a football under a headstone covered in flowers and bearing the inscription, “Here lies our dear foot-ball, Long may his ashes rest; He died by vote of the trustees, And not by our request.”

Baylor trustees, who possibly spent the fall of 1906 attending other schools’ unnecessarily rough games –– or playing checkers –– apparently weren’t prepared to spend more than a single school year without football. During the summer of 1907, they voted to reinstate the sport on campus. Except for a two-year hiatus during World War II, Baylor has fielded a team ever since.

There’s never been a shortage of charismatic football coaches, and Baylor had a few during its early seasons. In 1905, Baylor’s new coach was Archie Webb, who had been a football star at Brown University. Soon after he arrived in Waco, Webb devised what one newspaper called a “deeply laid plot” for the team’s preseason training camp.

The camp –– which really earned its name, since participants had to sleep on the ground in tents and cook outside over a fire — was to be held at Day’s Lake just north of Waco. After the Baylor players had assembled downtown and loaded their luggage on a train, Coach Webb “so managed affairs as to have all the men but one get left.” He then informed his surprised players they would have to get to camp by walking the five miles to Day’s Lake in the August heat, which they did.

Another colorful early coach was Enoch J. Mills, who led the 1908 and 1909 Baylor football teams. During his first season, Mills created controversy by conveniently ignoring the fact that his place was on the sidelines and not on the field.

On Nov. 7, 1908, Baylor played a football game against Tulane University in New Orleans. Neither team scored during the first half, but Baylor began to pick up steam in the second. The game took an interesting turn, however, after the Tulane coach noticed that the man quarterbacking for Baylor was not a student athlete but Coach Mills. He wore no headgear or nose guard as he ran plays.

The game was stopped and Mills and Tulane officials began a long argument on the field. Tulane threatened to keep Baylor’s share of the receipts if Mills didn’t leave the game and substitute a qualified student at quarterback. Mills finally gave in, and Baylor ended up losing to Tulane, 10-2.

Coach Mills later admitted to playing quarterback for about five minutes before being discovered. He explained in his defense that Tulane was not a member of any athletic association and therefore was not bound by intercollegiate rules. He said Tulane was using a player who had exceeded the maximum four years of eligibility, and who had been blacklisted by intercollegiate organizations. Mills said he entered the game in protest only after Tulane refused to remove the illegal player.

If the game against Tulane left Baylor fans with a bad taste in their mouths, it was nothing compared to what they witnessed three days later in Baton Rouge. Louisana State handed Baylor what is still the worst football defeat in its history –– an 89-0 flogging. If there was a bright spot, it came two weeks later when Tulane visited Waco. Baylor managed to get revenge by winning 6-0 on Carroll Field before an enthusiastic home crowd.

Baylor football thrived in next few decades. The team played in a new athletic conference and made exciting appearances before government officials and movie stars. I’ll tell those tales in the concluding part of this story next month.

When he isn’t researching Waco history or trying to learn to play the ukulele, former broadcast journalist Randy Fiedler works as a communications specialist with Baylor marketing and communications. He can be reached at fied103@yahoo.com.