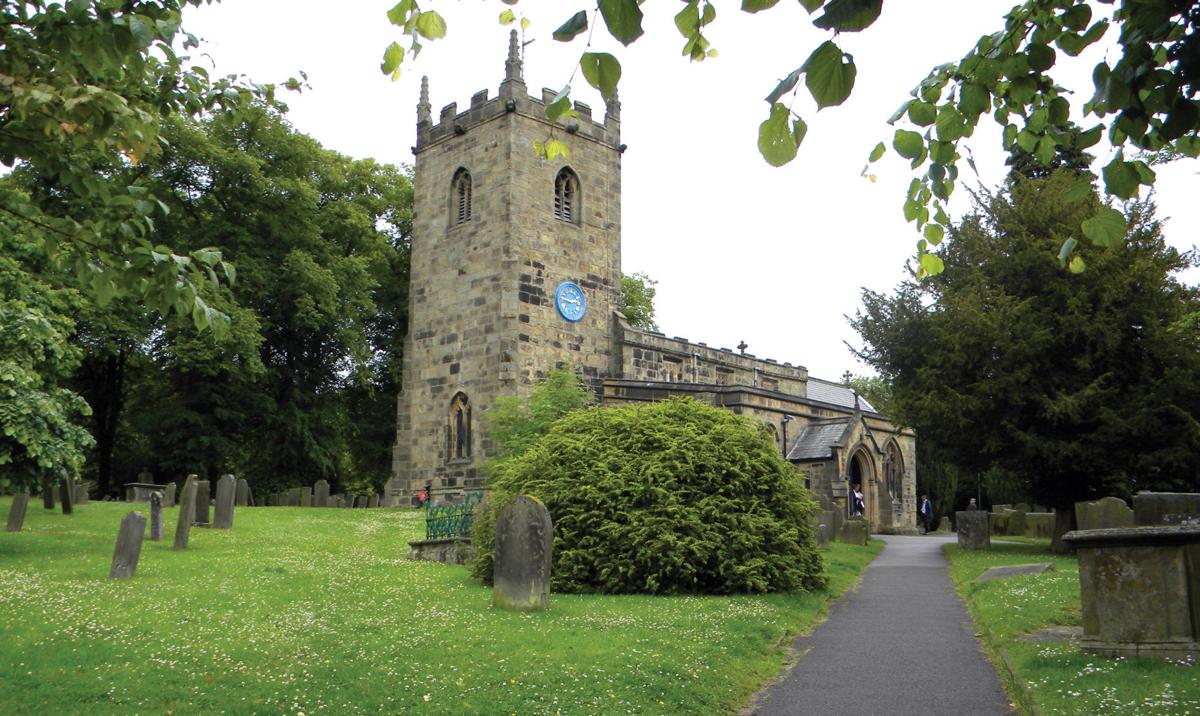 The Parish Church of St. Lawrence in Eyam, England, still stands today. It was led by its rector, the Rev. William Mompesson, during a pandemic in 1665-66. Mompesson convinced the citizens to self-quarantine to stop the spread of the disease. 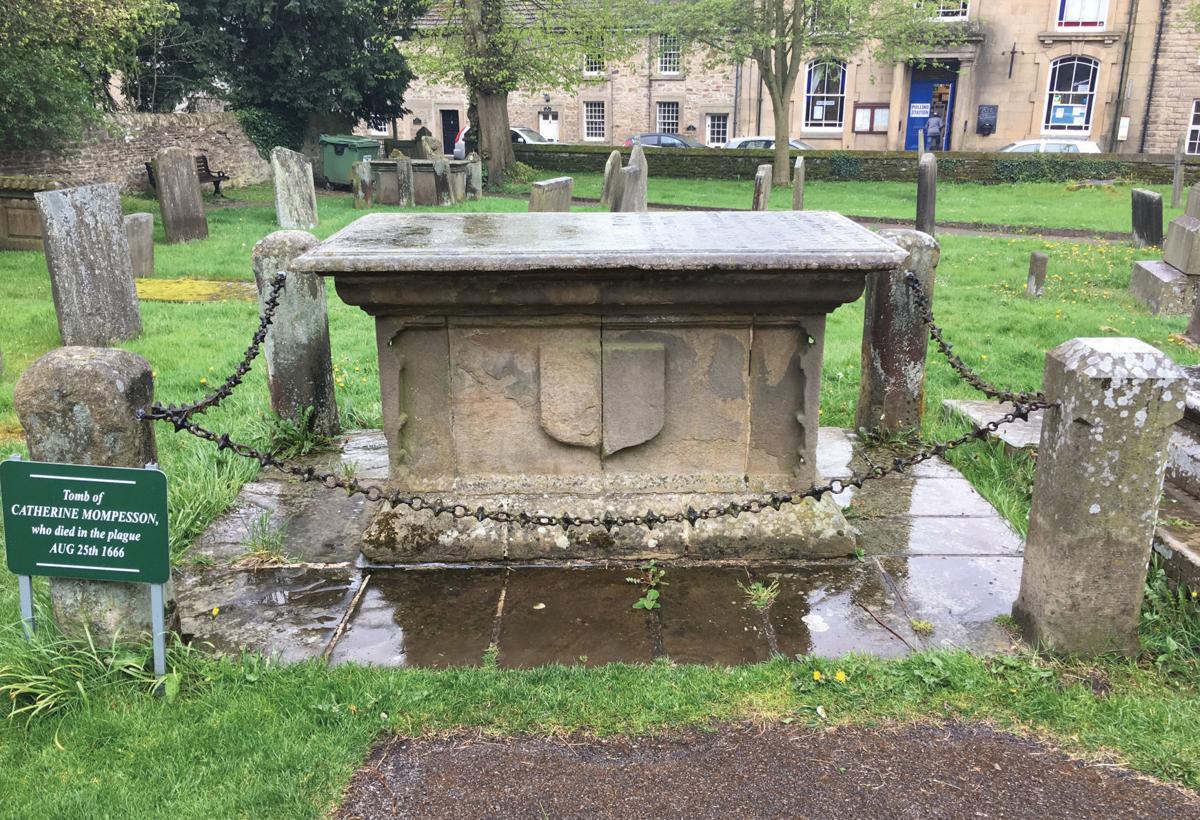 The tomb of Catherine Mompesson, wife of the Rev. William Mompesson, sits in the church graveyard. She died at age 27 of the plague. 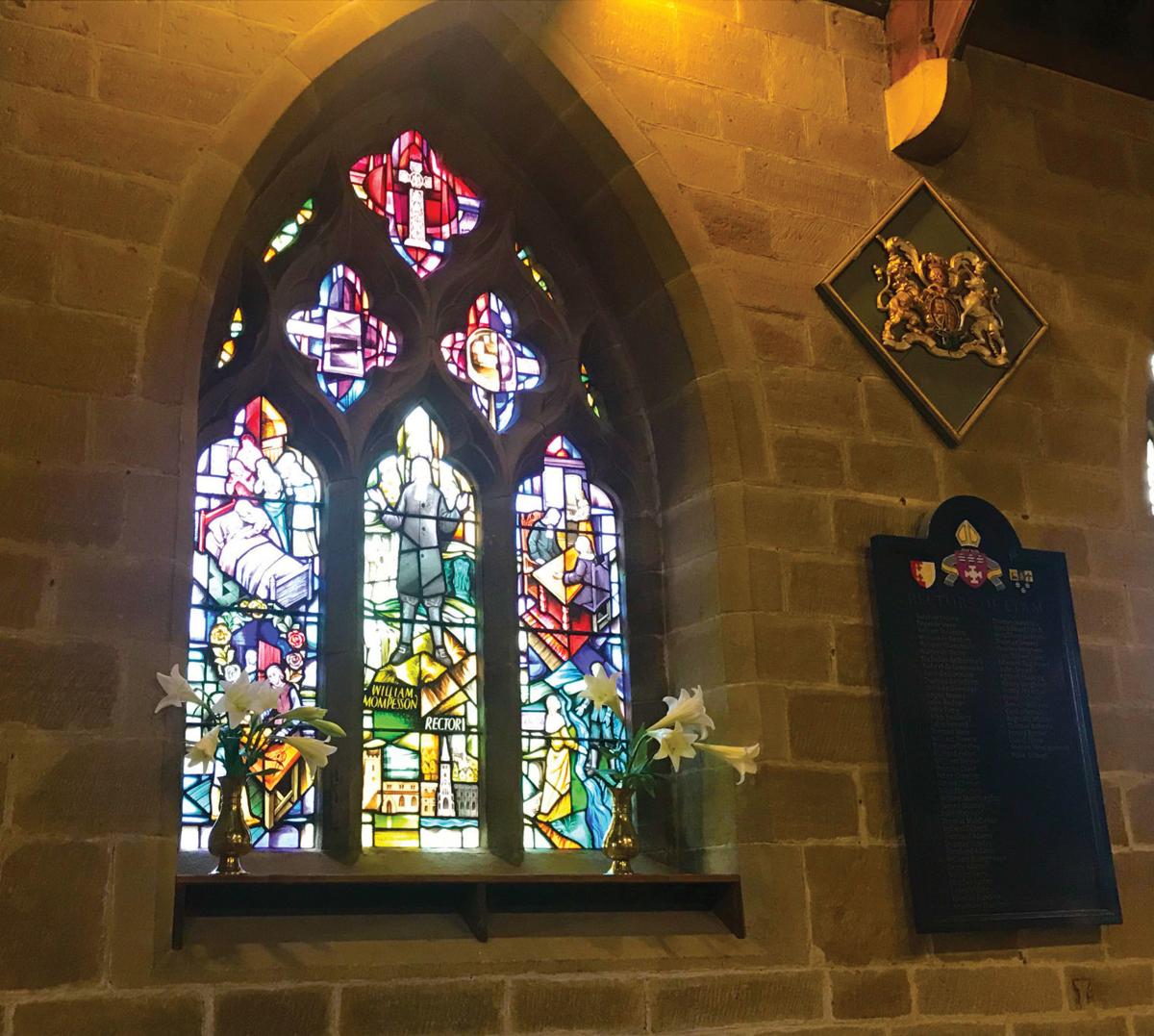 This stained-glass window added in 1985 honors the Rev. William Mompesson for his care of the village during the plague. 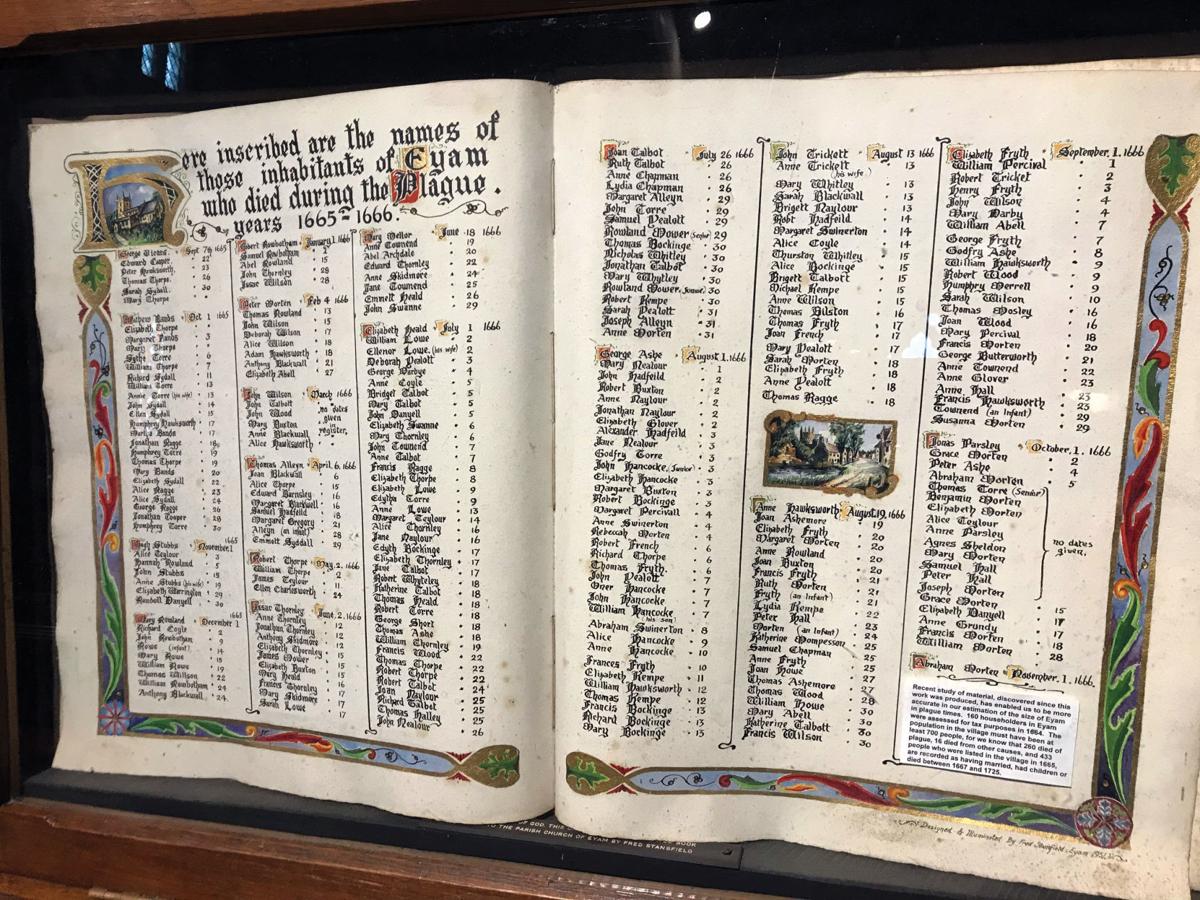 Inside the church is this list of the 260 villagers in Eyam who died of the plague. The village had about 700 residents. 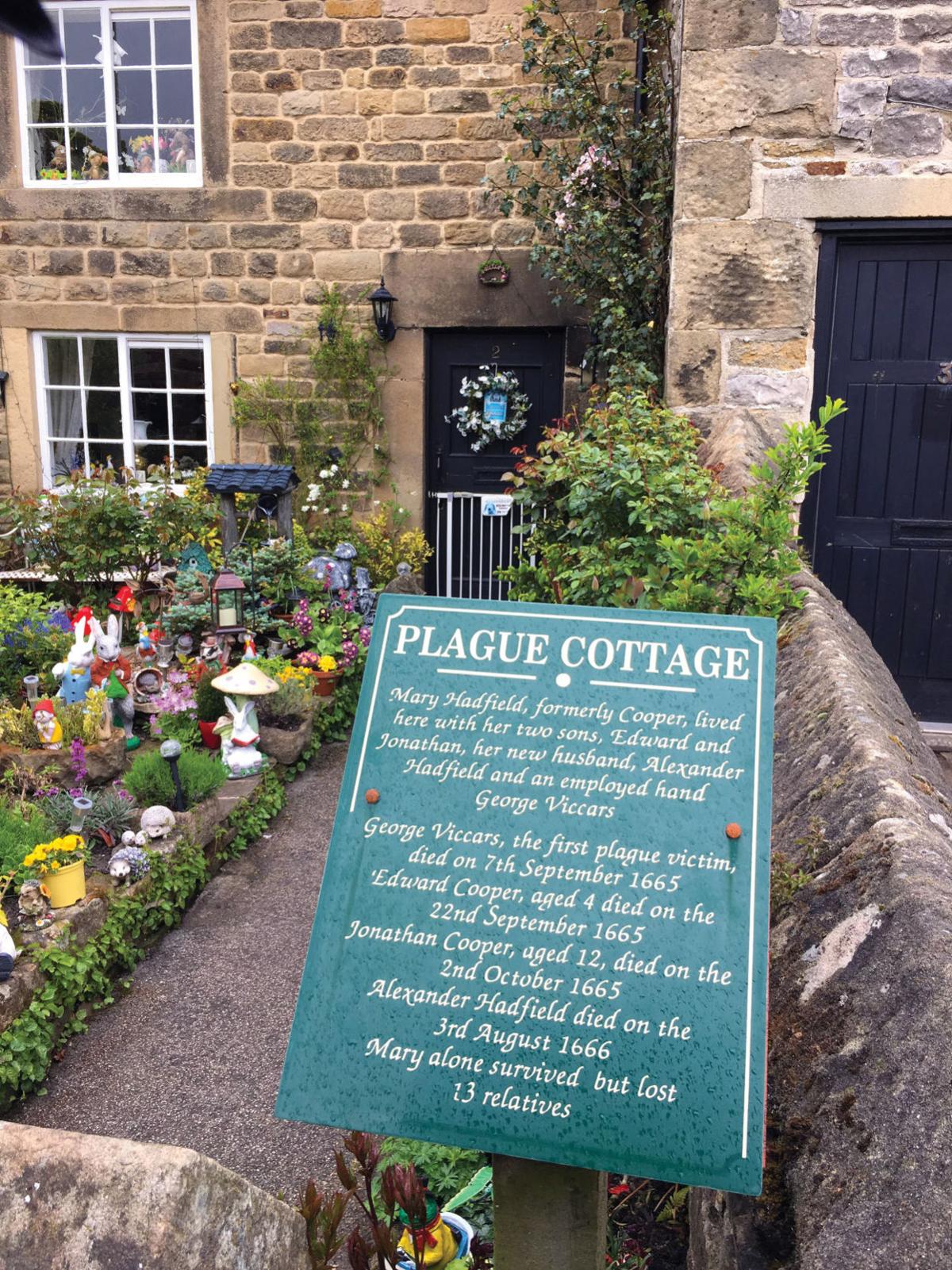 The sign for this “plague cottage” notes that the first victim of the plague in Eyam, George Viccars, died there. He was a boarder at the home, which also had three family members die. 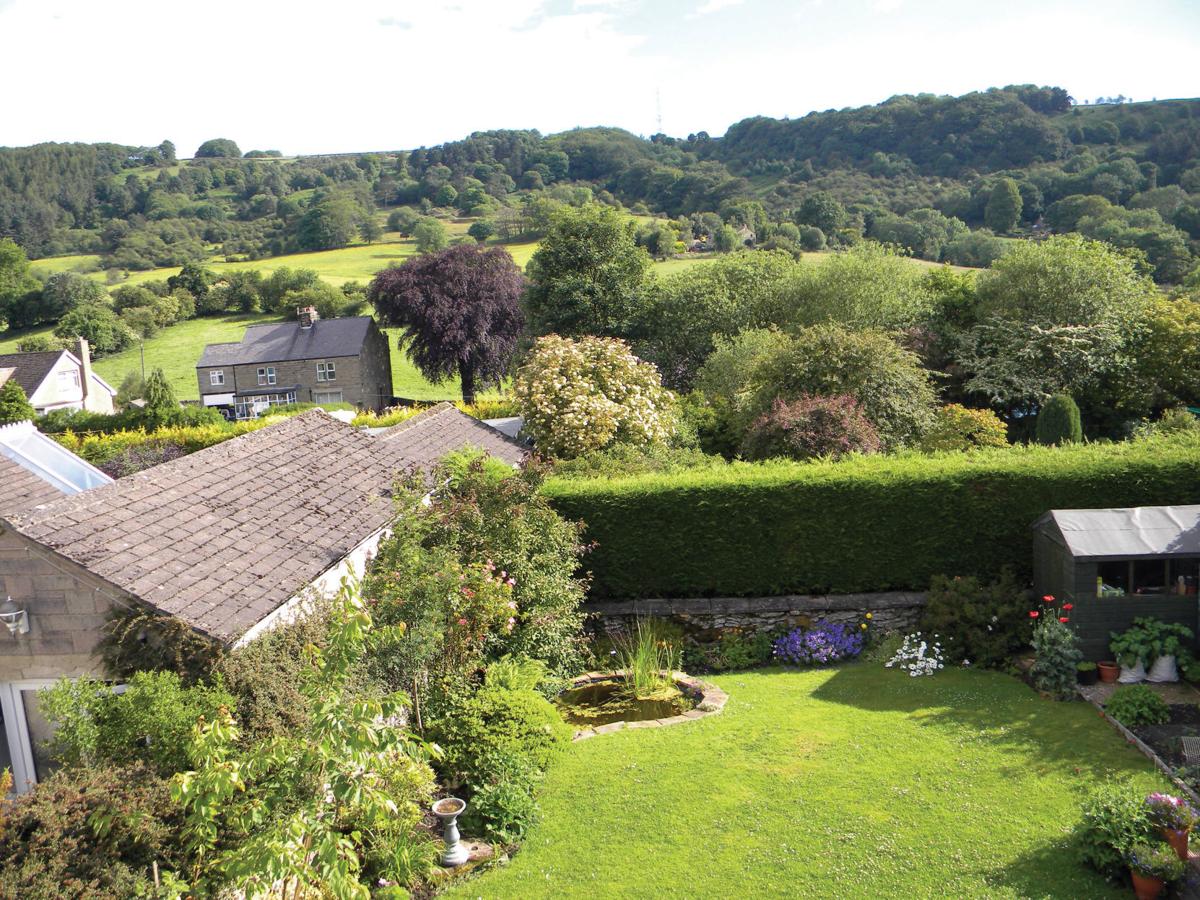 The view from a window at the Innisfree Cottage, a bed and breakfast on the edge of the village, shows the lush countryside.

While “social distancing” and “self-quarantine” were previously unfamiliar concepts for many of us, they are hardly new. Even people who lived before the discovery of microbes believed such actions could mean the difference between life and death. The English village of Eyam (pronounced “eem”), a favorite travel stop for retired McLennan Community College English Professor Carol A. Lowe and her husband Phillip, provides a notable example.

A bolt of cloth ordered by tailor’s assistant George Viccars arrived in Eyam, a village nestled in the Derbyshire Dales of England, in 1665. Viccars died days later, Eyam’s first victim of the plague, the Black Death that would ravage London and the village of Eyam.

The plague, spread by fleas carried from London in the bolt of cloth, sickened and killed first the family with whom Viccars boarded and then other villagers. Eyam’s rector, the Reverend William Mompesson, devised a plan. Knowing he could not save his own village, he proposed the villagers self-quarantine to prevent the plague from spreading to nearby communities.

As people began to die, some citizens fled the village — perhaps to a place with no reported plague or perhaps to a place that developed plague because they brought the contagion with them. Even the Reverend Mompesson’s wife Catherine asked her husband to take her and their children away from the stricken village. He refused to leave his parishioners. He did, however, urge her to flee with their children. She, in turn, refused to leave him.

Amid growing fear and panic, Mompesson appealed to his villagers’ sense of compassion and charity. In what is perhaps one of our world’s best examples of selflessness and love for one’s neighbor, the people of Eyam agreed to isolate themselves for as long as it took for surrounding villages to be safe. For over a year, no one left Eyam to spread the plague.

The village was not self-sustaining, especially with so many sick and incapable of tending crops and animals. Mompesson’s plan would have been impossible without the reciprocal generosity of Eyam’s neighbors. The Earl of Devonshire agreed to provide food and supplies without making direct contact, leaving the provisions at a boundary stone marking Eyam’s border.

When the Earl’s men had gone, Mompesson appointed men from Eyam to take carts to haul the loads into the village for distribution. Villagers left coins, as long as they had coins, in vinegar-filled holes in the rock, believing the vinegar would kill the contagion.

Limited trade with two nearby villages continued with another 17th-century version of social distancing. At a small spring now known as Mompesson’s Well, neighboring people left food and medicines. Once they had gone, Mompesson left coins in the spring for payment, assuming the running water washed away contagion.

During the village’s self-isolation, Mompesson continued to conduct church services, but not in the church building. Instead, the congregation met outdoors in a dell known as Cucklet Delph. Mompesson stood on the hillside, and, in another 17th-century version of social distancing, the villagers sat in family groups scattered on the grass below.

Mompesson and his wife Catherine, age 27, ministered to the people of Eyam in their small cottages, risking possible contagion. Her devotion to her husband and the villagers cost Catherine her life. She succumbed to the plague and was buried in Eyam’s churchyard.

Standing before her tomb, I knew I was looking at a monument to Catherine’s extraordinary self-sacrifice. In the peaceful, quiet setting, I tried to imagine the fear and anxiety of the inhabitants, knowing they were contained with a deadly, incurable pestilence. But who could imagine that in the 21st century we would face a pandemic of our own?

Surrounded by village graves hundreds of years old, the Parish Church of St. Lawrence still has its medieval nave. Victorian-era repairs include an addition that houses an exhibition outlining the events of the plague years. Added in 1985, a stained-glass window features the figure of William Mompesson. The original church registry of baptisms and burials, opened to pages from 1665, is on view behind glass. Nearby, a modern document lists the 260 of 700 residents who died.

Farther down Church Street, a row of houses, now known as “the plague cottages,” witnesses to the families devastated by the plague. On my most recent visit to Eyam in 2019, the garden of one of the plague cottages had been turned into a whimsical fairy garden, a jarring contrast with the sign listing the names of the household’s victims. Like many tourists, I tried not to weep as I read the names and ages of the victims. Grandparents, parents, children — the plague spared no one.

Both the boundary stone and Mompesson’s Well, an access point to an underground stream, can be reached on public footpaths. The trail to the well is a steep climb up one of the beautifully green hills of the Derbyshire Dales. For those of us less athletically inclined, the well is also accessible by car and a much shorter walk. Cucklet Delph also is accessible, a short though often muddy walk from the village.

On one visit to Eyam, we stayed at Innisfree Cottage, a modern bed and breakfast on the outskirts of the village. Our window looked over the garden to green pastures where horses grazed and on to the wooded hills.

As in any tourist town, one of the pleasures of staying in Eyam is walking through the village after the day trippers have gone. Stone buildings, yellow in the sunlight, gray on cloudy days, topped with slate roofs boast colorful flowers in gardens and hanging baskets.

The Miners Arms, the village pub, opened before the plague years. Locals are friendly and eager to talk with tourists, sharing tidbits of information about their village and history and as eager to hear about your home. From the B&B owners to the rector at the church to local artisans, all paused in their activities to talk with us.

One of England’s most lavish stately homes, Chatsworth provides a stark contrast to the tragedy of 17th-century Eyam. Still a small village with a current population just under 1,000, Eyam and its economy rely primarily on tourism. The lead mines that were the town’s main industry closed mid-20th century.

And now, a modern plague has shut down travel. Like their 17th-century counterparts, the citizens of Eyam wait, with all of us, for their businesses to open, travel to resume, and people to emerge into the lush green Derbyshire summer.