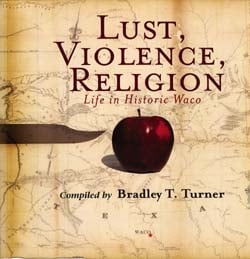 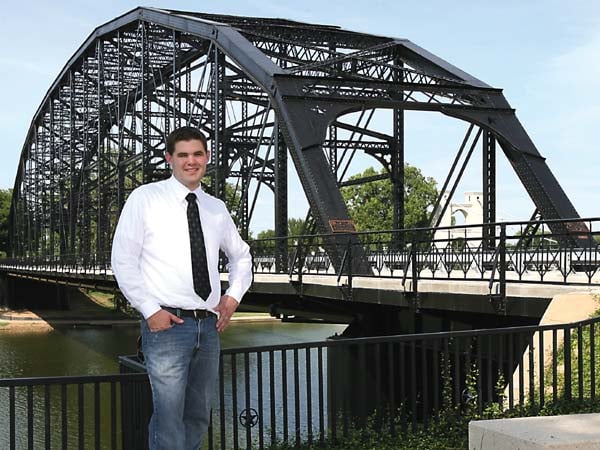 Bradley T. Turner, a seventh-generation son of Central Texas, contemplates some of the shady or sordid events of Waco’s past that took place in the blocks between the Brazos River and the ALICO Building. Turner is the author and lead editor of “Lust, Violence, Religion: Life in Historic Waco,” which will be released this month by the publishing arm of Texas State Technical College-Waco.

Bradley T. Turner, a seventh-generation son of Central Texas, contemplates some of the shady or sordid events of Waco’s past that took place in the blocks between the Brazos River and the ALICO Building. Turner is the author and lead editor of “Lust, Violence, Religion: Life in Historic Waco,” which will be released this month by the publishing arm of Texas State Technical College-Waco.

Bradley T. Turner, a seventh-generation son of Central Texas, contemplates some of the shady or sordid events of Waco’s past that took place in the blocks between the Brazos River and the ALICO Building. Turner is the author and lead editor of “Lust, Violence, Religion: Life in Historic Waco,” which will be released this month by the publishing arm of Texas State Technical College-Waco. (Photo by Duane A. Laverty)

In compiling the essays and illustrations that would make up “Lust, Violence, Religion: Life in Historic Waco,” seventh-generation Central Texan Bradley T. Turner said he was reminded often of the tale about Oliver Cromwell.

When the Lord Protector of the English commonwealth was being painted by artist Sir Peter Lely, the story goes, Cromwell told Lely to be certain not to gloss over his physical imperfections, but to portray him faithfully, “warts and all.”

“Lust, Violence, Religion” is just that sort of portrait of life in rough-and-tumble Waco. The book spans from the city’s rugged frontier roots into the 20th century. It isn’t just dry, scholarly writings or another pictorial history of Waco. Turner said he set out to write a social history of the times and places that give the city much of its flavor.

The book presents accounts of prostitution, gun battles and racial violence in the very heart of town.

“We anticipate we’ll be getting some blowback,” Turner said. “This is not the Chamber of Commerce version of Waco’s history, to be sure.”

The 2001 Crawford High graduate said local history was not his first love. Rather, it was something that grew on him the more he dug into the topic. Specializing in Waco-area history was a practical choice as well. When Turner started graduate school at Baylor in 2004, he couldn’t afford to do research in far locales on exotic topics. He needed to use resources closer to home.

“If I was taking a class on Vietnam, for example, I’d do a paper on Vietnam and Waco; if it was a class on civil rights, I would do integration in Waco. A class on World War II? I did a paper on rationing in Waco,” he said.

Turner earned an associate’s degree at McLennan Community College. He now works there as an adjunct faculty member and in its testing center. From MCC, he went to the University of Mary Hardin-Baylor, where he earned bachelor’s degrees in political science and history.

While teaching at MCC, he discovered many of his American history students were not familiar with Waco’s storied past. In his classes, he learned, maybe one in 30 students knew about Waco’s World War I Army installations — Camp MacArthur and Rich Field. Few knew of the impact of Ku Klux Klan violence here. He began to incorporate such lessons into his lectures.

Academic essays often gather dust on the shelf after completion. But Turner said he thought people might enjoy reading them if they were assembled in an attractive fashion. He approached the publishing office of Texas State Technical College-Waco with his concept.

The book is scheduled for a mid-September release. It is being pre-sold at Amazon.com, where it was No. 1 on the Kindle pre-order list for Texas titles, he said. Marketed on Facebook with a fan page, the multimedia plan includes podcasts of chapters presented by voice artist Mike Jones.

“I’ll just be happy when it’s on everyone’s bookshelf and off my desk,” Turner said.

He teamed with his wife, Andrea — also a Waco native — to write Chapter 7, “Lord Have Mercy: The Horrific Tornado of 1953.” This came about after a suggestion from TSTC publishing’s Mark Long.

“You know it’s an odd book when the chapter on the tornado is the upbeat tale suggested by the publisher,” Turner said. “But that’s because once we started digging into it, we found all these stories of courage and sacrifice and even heroism.”

Andrea Turner earned her bachelor’s degree at Baylor, where she focused on business journalism and accounting. She works at the university’s Moody Memorial Library.

Andrea put her journalistic sleuthing skills to good use, poring over the archives of the Waco-Tribune Herald, Waco Times-Herald and the Waco News-Tribune. She found scores of articles published right after the tornado detailing its aftermath. The Turners also researched articles about the ’53 tornado in state and national publications.

They found so much information on the storm they were unable to include it all in the book. He said they may write another book on the tragedy, which killed 114 people.

They also are considering work on a joint project about Waco’s military history during World War I.

Turner already is working on a new Waco “history” book — “Cotton bales, Goatmen, Witches: Myths, Legends and Strange Stories from McLennan County.” The book combines a scholar’s intention to document the sources of such tales with an entertainer’s eye for intriguing amusements.

“I have no desire nor need to find out if any of these stories are true in the conventional sense or not,” he said. “They are cool on their own merit. There’s a reason they exist in the first place.”