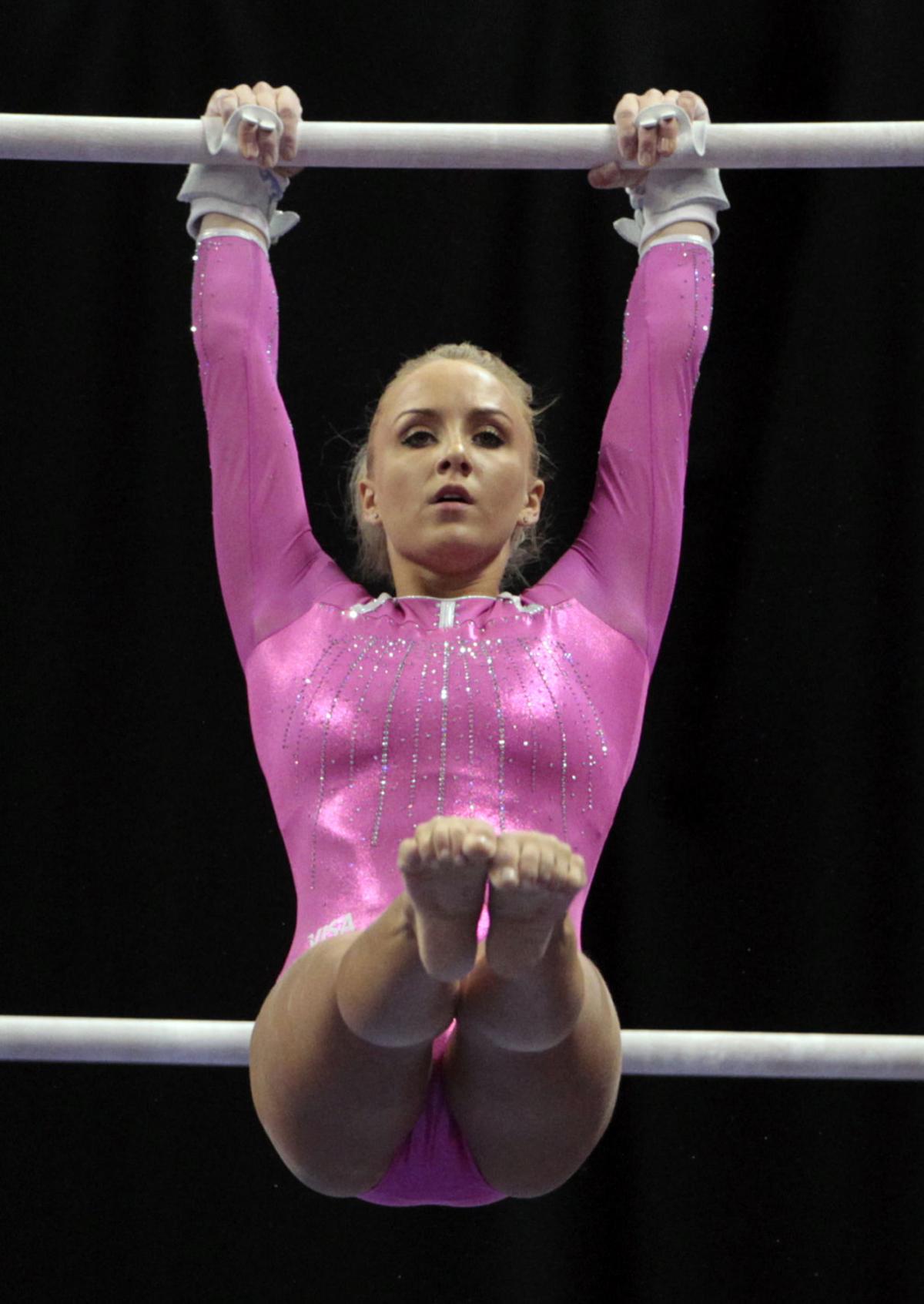 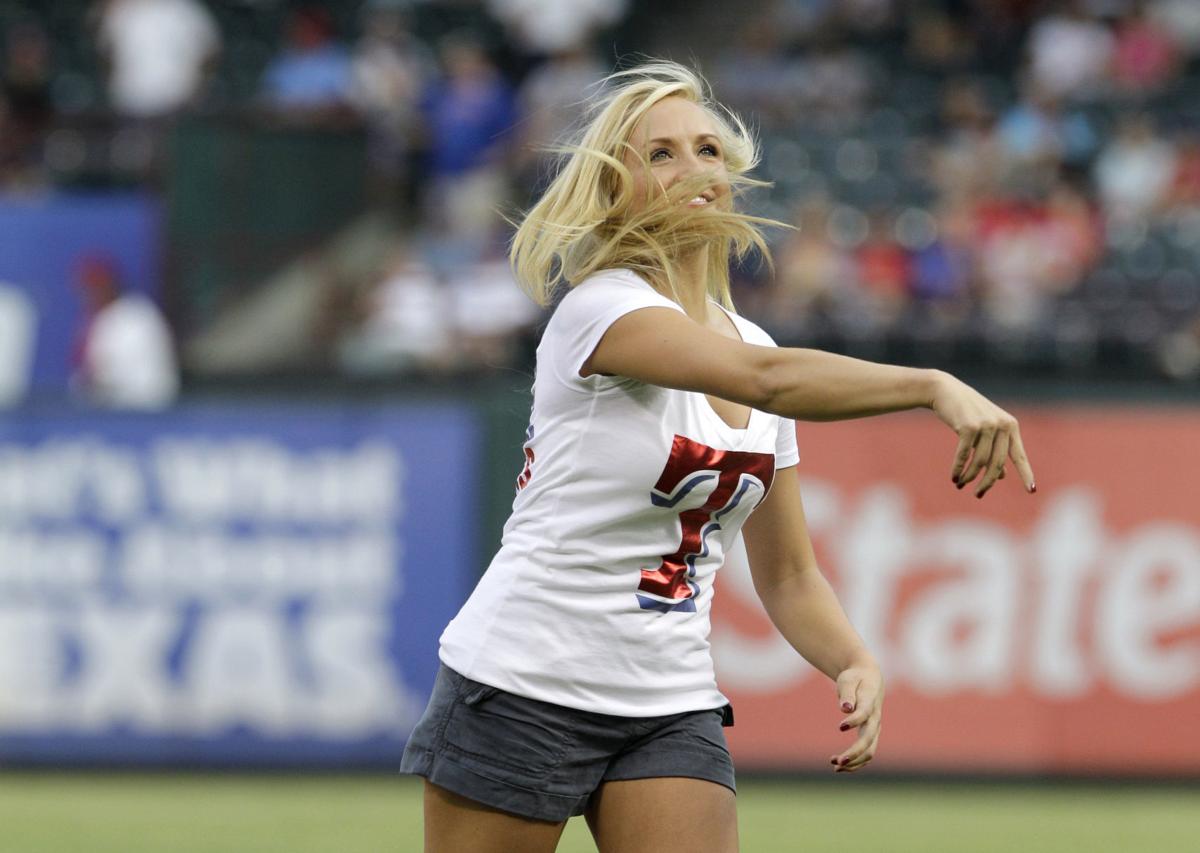 Olympic medalist Nastia Liukin before a baseball game between the Tampa Bay Rays and Texas Rangers in 2011. 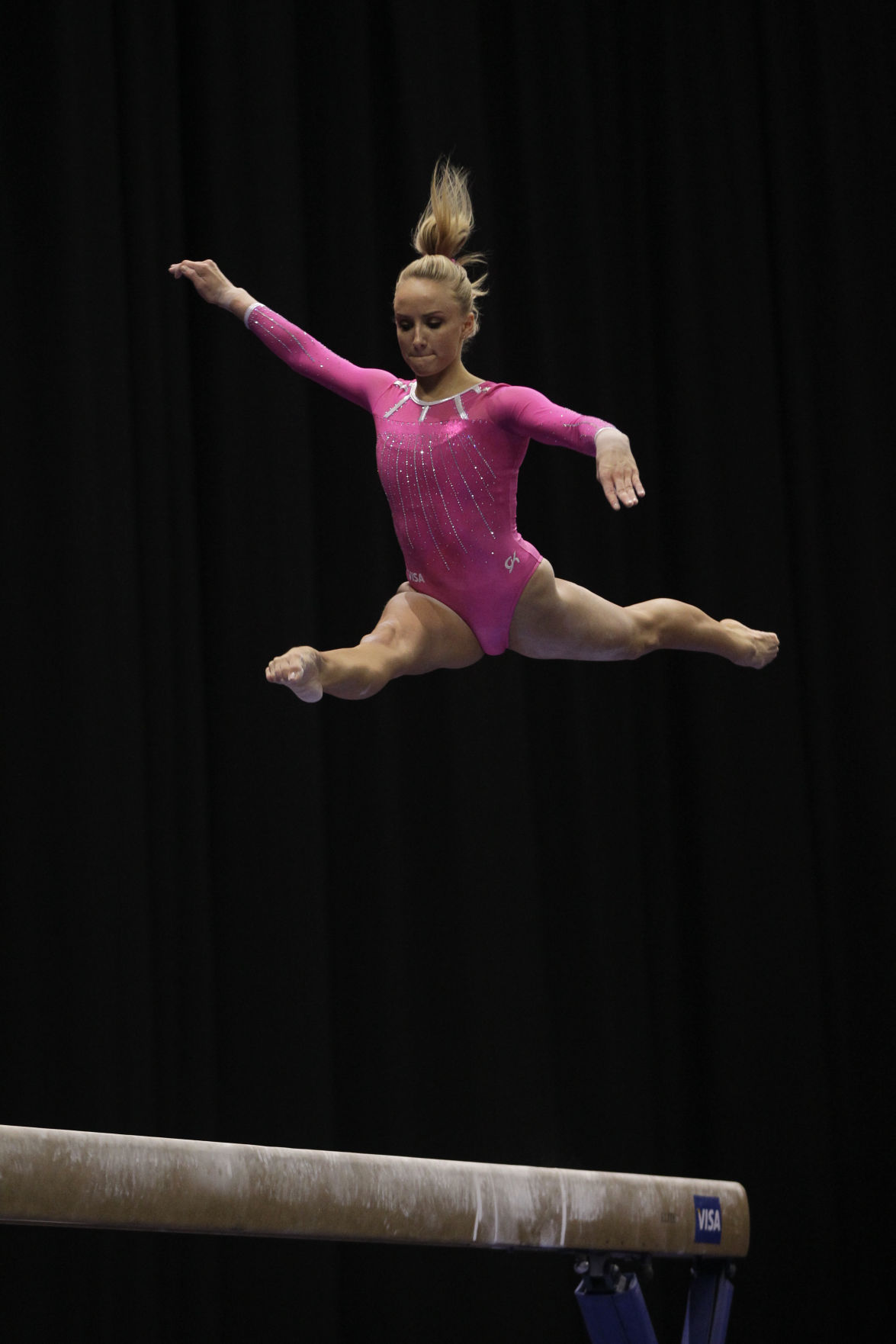 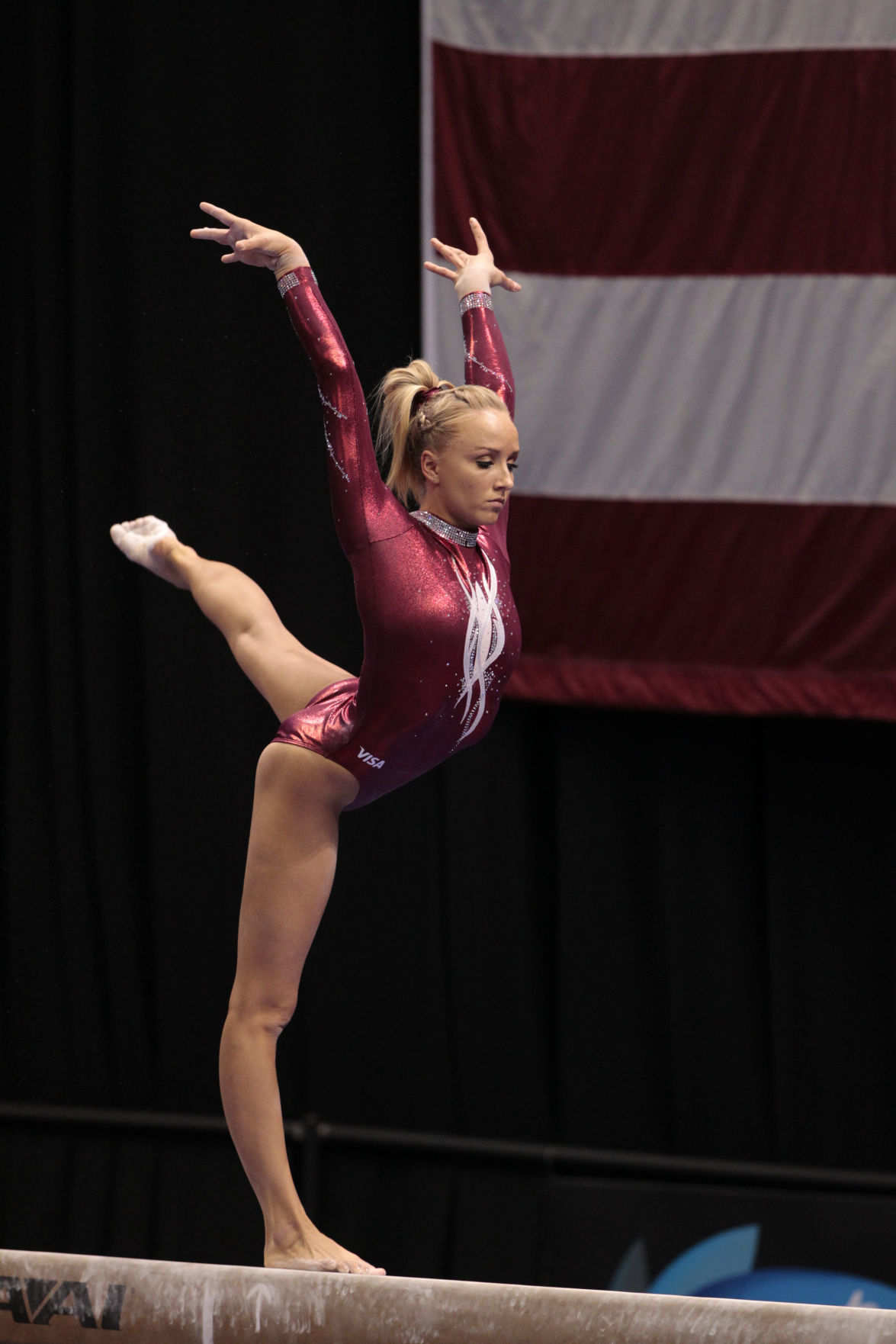 Olympic medalist Nastia Liukin before a baseball game between the Tampa Bay Rays and Texas Rangers in 2011.

Nastia Liukin has heard it before. Because both of her parents were champion gymnasts in their youth, some people naturally assume that they pushed her into the sport.

Nothing could be further from the truth. In actuality, Liukin said, she tumbled head over heels in love with gymnastics completely on her own.

“When we moved to Texas, we didn’t have the money for a babysitter to watch me all day long,” Liukin said. “So I spent the days at the gym with my parents. Luckily for them, I fell in love with gymnastics. People thought because my parents were successful gymnasts that they pushed me to follow in their footsteps, but it was the opposite. I wanted to do gymnastics because it made me happy.”

Liukin’s passion for the sport pushed her to record-setting lengths. She grew to become one of the top gymnasts in the world, winning nine medals at the World Championships and five at the Olympic Games, culminating with the gold medal in the all-around at the 2008 Summer Games in Beijing.

Though the sport of gymnastics carried her on a ride all over the world, Liukin considers Texas home. And on Tuesday, Liukin, 27, will join the Texas Sports Hall of Fame, as the youngest member of the eight-member Class of 2017.

Liukin was born Oct. 30, 1989 in Moscow, a little more than a year after her after father Valeri captured a pair of gold medals at the 1988 Summer Games in Seoul, South Korea. Yet Nastia didn’t just inherit her athletic ability from her dad, as her mother Anna was a world champion in rhythmic gymnastics in 1987.

The family immigrated to the Unites States when Nastia was 2½ years old, seeking a fresh start following the fall of the Soviet Union. After a stopover in New Orleans, which they considered a little too laid-back for their taste, they settled in Texas. Valeri and a former teammate opened World Olympic Gymnastics Academy in Plano, and the gym became Nastia’s second home.

Her parents couldn’t keep her from turning cartwheels on the mat.

“I just loved the sport,” she said. “I set goals for myself, things I wanted to achieve, but I just pushed myself to get better.”

Valeri and Anna hadn’t envisioned a gymnastics career for their only child. But the more time she devoted to it, the more her natural talent began to emerge. She registered for her first gymnastics competition at age 6, with Valeri as her coach, and within a few years she had established herself as a budding star.

“It’s hard to say when things like the Olympics became a reality,” Liukin said. “When I was 10, 11, 12, that’s when it started to become realistic. For so many, the Olympics may be a once-in-a-lifetime thing. Not everyone gets that chance to make their dream a reality.”

World-class gymnasts are often short with powerful upper-body strength. Nastia couldn’t match some of her challengers in sheer power, but she boasted seemingly unmatched balance and grace. As such, she became a beast on the uneven bars and the balance beam.

Liukin competed in her first junior national meet at age 12. Though she finished a disappointing 15th in the all-around chase, she did enough to qualify for team USA’s Junior Pan Am team. At that event, she improved to second in the all-around and helped the Americans claim a team gold medal.

Over the next several years, as Liukin grew and matured, she won multiple junior national and world titles. An ankle injury prevented her from competing for much of the 2007 season, but she returned the next year with a fury.

After winning the American Cup and finishing second at the U.S. Championships, she punched her ticket to Beijing with a second-place performance at the U.S. Olympic Trials.

In China, she introduced herself to the world with the performance of a lifetime.

“I was very confident, not at all nervous, which was unusual,” she said. “I just knew I was absolutely in the best possible shape as a gymnast, and I just wanted to focus on letting it happen. I knew that mentally I was ready. My dad trained me for that moment.”

Liukin captured five medals in all, including helping the U.S. women to a team silver medal. Best of all, she claimed the “heavyweight belt” of gymnastics, edging U.S. teammate Shawn Johnson for the all-around title and a gold-medal perch.

“Going into floor, I knew all I needed was to make one good floor routine,” Liukin said. “Of course that’s easier said than done, because at the Olympics anything can happen. But I knew as long as I just landed on my feet, I had the medal. I didn’t have to do anything amazing. … That moment in general is so hard to put into words. It’s the dream of a lifetime, and when it happened, it was just a surreal feeling.”

Following the Olympics came the inevitable whirlwind media tour, with television appearances galore. But the pull of gymnastics hadn’t released its grip on Liukin yet. After a layoff, she began training in earnest for the 2012 season, in hopes of returning to the Olympics in London.

She couldn’t recapture her old magic, but impressed fans with her fire and guts. Liukin took a hard fall to the mat while competing in the bars on the final day of the U.S. Olympic Trials. She hit the mat face-first, but rose and shook her head, symbolically clearing out the cobwebs, before returning to finish her routine and stick the dismount. Later, she closed out with a stirring effort on the beam, and was rewarded with a standing ovation from the crowd of more than 18,000.

“I had no regrets. I gave it my all,” Liukin said. “To finish with a standing ovation – that was the first standing ovation of my life – that really was the defining moment of my career. I just learned that life is all about moving forward.”

Though her competitive gymnastics career has ended, Liukin continues to move forward in life at the same breakneck pace that she did when she was whipping and flipping herself across the mat. She graduated from New York University in just 3½ years, and has developed several successful business ventures, including launching her own clothing line at J.C. Penney and her own brand of gymnastics apparel and equipment.

She used her balletic grace in another competitive realm in 2015 when she participated on the TV show “Dancing With the Stars.” Liukin and her partner Derek Hough reached the semifinals.

Now she’ll be part of the Texas Sports Hall of Fame – all before even turning 30.

“Gymnastics has taken me places I never thought I’d go,” she said. “It’s still part of my life today. It’s what I loved to do as a young child, I had a passion for it, which is why I went as far as I did. It’s really exciting to be honored for something that was such a big part of your everyday life.”

Wade Phillips has walked and talked football from an early age

For most kids, the playground is equipped with swings and monkey bars.