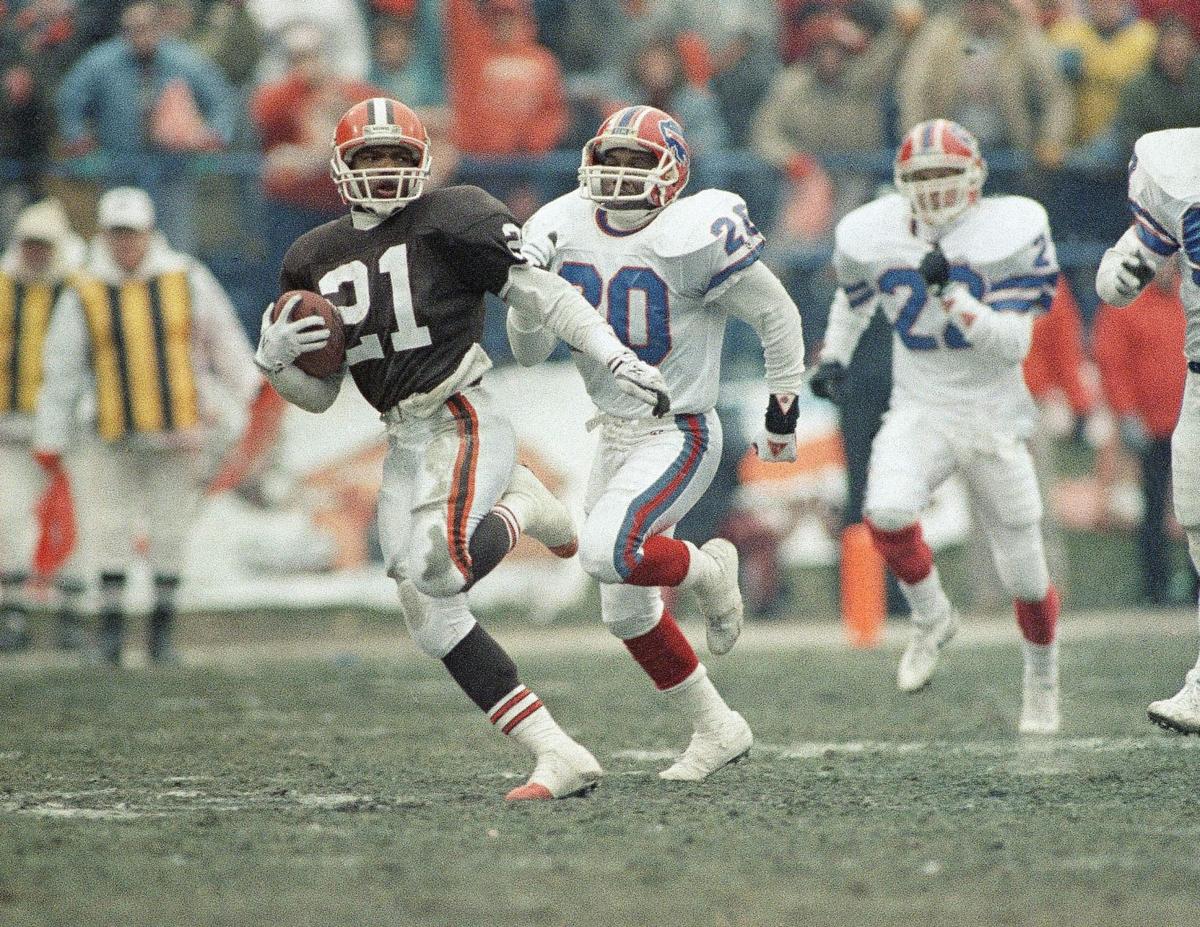 Eric Metcalf (left) runs away from a Buffalo defender in 1990. 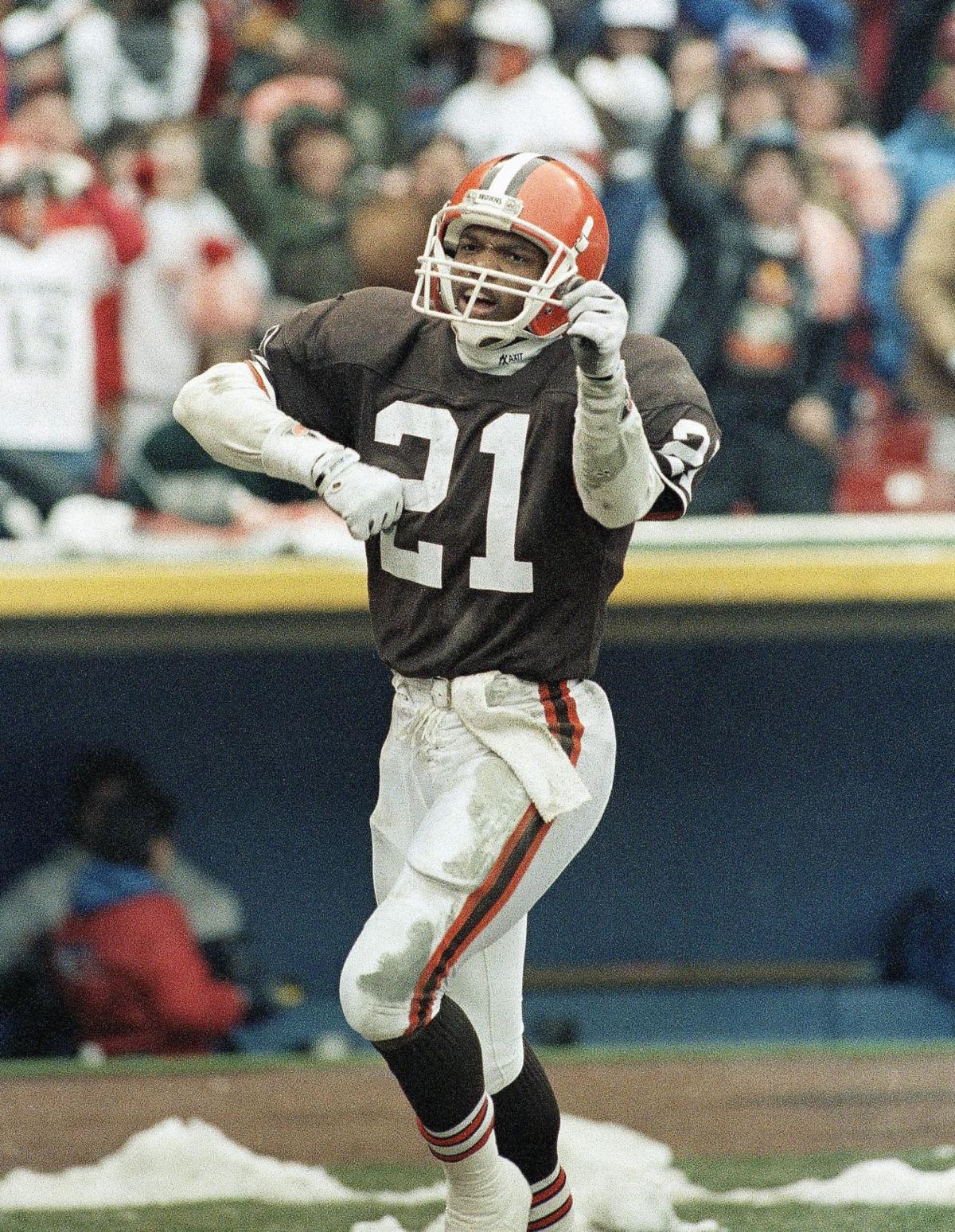 Though small in stature, Eric Metcalf utilized his quickness and lack of size to consistently avoid defenders.

Eric Metcalf (left) runs away from a Buffalo defender in 1990.

Though small in stature, Eric Metcalf utilized his quickness and lack of size to consistently avoid defenders.

Eric Metcalf didn’t have to look far to find his role model.

His father, Terry Metcalf, was an All-Pro running back for the St. Louis Cardinals in the 1970s. One of the most versatile players of his era, Metcalf was a dynamic receiver coming out of the backfield and ranked among the best kick returners in the NFL.

When people saw Eric play for the Texas Longhorns and seven NFL teams, it was evident where he got his genes.

“I wanted to be just like my dad, and fortunately my dad happened to be an NFL player,” Eric said. “Even at Texas, it was a tall order because people had seen him play for the Cardinals. But the only pressure I felt was from myself. Fortunately, I was pretty good at it.”

Eric didn’t just crawl out of his father’s shadow, he carved out his own legacy.

Metcalf developed into a three-time all-Southwest Conference running back for the Longhorns and was named All-American and the conference’s player of the year in 1987. He became a first-round draft pick in 1989 and played six seasons for the Cleveland Browns before going on to play for Atlanta, San Diego, Arizona, Carolina, Washington and Green Bay in a 13-year career.

On Feb. 21, Metcalf will be inducted into the Texas Sports Hall of Fame. While most people remember Metcalf for his football accomplishments, he was also an NCAA championship long jumper for the Longhorns.

Now 49, Metcalf is back in his hometown in Seattle where he coaches the University of Washington sprinters and relay teams. He had previously coached football and track at Rainier Beach High School in Seattle, and ran an elite high school track and field club called the Seatown Express.

Since he was a kid, he always played football and ran track. While he wanted to emulate his father, Terry wanted Eric to do his own thing.

“Playing the game and coaching in high school, I had seen parents really pushing their kids instead of just allowing them to play,” said Terry Metcalf. “My expectations would be higher than the average coach and I didn’t want to become a stumbling block. I didn’t want to get in the way. I just wanted to allow him to grow and be his own person and develop his talent.”

With Terry finishing up his NFL career with the Washington Redskins, the Metcalf family moved to Virginia as Eric began high school. He starred for Bishop O’Connell High School in Arlington and was recruited by schools across the country.

“I committed to Miami, but my mother and father didn’t want me to go there,” Metcalf said. “My entire life I went to Catholic schools, and with that in mind you can assume what school they wanted me to go to. But I told them I didn’t want to go to Notre Dame. But then Coach (Fred) Akers came to see me, I loved the visit there. I chose Texas which was the perfect spot for me.”

Since Metcalf wasn’t from Texas, many of his new Longhorns teammates didn’t know him. They had heard of his exploits but wondered how such a tiny guy could dominate games in such a major way.

“Back in 1985, we came in as freshmen together,” said former Texas tight end Tim McCray. “We saw he was fast in camp. Nobody really knew much about him, but in the first game against Missouri he took a punt back 80 yards and we thought, ‘OK, that’s what all the hype was about.’ Ever since then he was the man. His name was born that day against Missouri.”

After solid freshman and sophomore years, Metcalf exploded as a junior in 1987 as he rushed for 1,161 yards and 10 touchdowns and caught 33 passes for 234 yards. He also averaged 13.5 yards on 24 punt returns to earn SWC player of the year in David McWilliams first year as head coach after replacing Fred Akers.

“When I first got there with Coach Akers, we were still in the I-formation, and I ran between the tackles like I had played my whole life,” Metcalf said. “Coach McWilliams played more of a split back and ran draws, and I was able to catch a lot of passes.”

Metcalf also produced a strong senior year with 932 yards rushing and eight touchdowns and 42 catches for 333 yards and two scores. That led to him being picked No. 13 overall in the first round by the Cleveland Browns.

Metcalf’s lone regret was that he was never able to beat Oklahoma during his four seasons with the Longhorns. Metcalf grew up hoping to play for Oklahoma, but coach Barry Switzer never offered him a scholarship.

“I have no idea how many offers I got, but I remember getting letters from everyone except Oklahoma,” Metcalf said. “They always had a lot of running backs like Billy Sims, and I thought I could play there. That’s not why I went to Texas, but I got to understand what the rivalry meant. I really wanted to beat them but unfortunately I never did.”

Metcalf starred for the Texas track team as he won national long titles in 1986 and 1988 and was also a tremendous 100 and 200-meter runner. He tried out for the 1988 United States Olympic team but finished eighth behind an unbeatable field that included Carl Lewis, Mike Powell and Larry Myricks who swept the long jump medals in Seoul, South Korea.

Just having the chance of competing against Lewis in the Olympic Trials was a thrill for Metcalf.

“When I was in high school, I had a wall dedicated to Carl,” Metcalf said. “Now I was on the same stage with him. It wasn’t my main sport, but I could still be like a fan and say, ‘Wow, that’s Carl Lewis.’”

Metcalf immediately stepped into a major role for the Browns as a rookie in 1989 as he rushed for 633 yards and six touchdowns and caught 54 passes or 397 yards and four scores while also amassing 718 yards in kick returns.

During his second season, he led the NFL with 1,052 kickoff returns and two touchdowns. But his best all-around seasons for the Browns were in 1993-94 when he made consecutive Pro Bowls.

Metcalf relished the atmosphere in Cleveland and loved playing games at old Municipal Stadium before the rowdy fans who were dubbed the Dawg Pound.

“There was nothing like playing in that city,” Metcalf said. “If a city deserves a champion, it’s them. With those die-hard fans, it was like being in a college town. That’s how much they love that team, and I loved being a part of it. Going back two, three or four times a year, people still talk to me like I was playing two years ago.”

Playing for the Atlanta Falcons in 1995, Metcalf enjoyed his most productive season as a receiver as he made a career-high 104 catches for 1,189 yards and eight touchdowns. As his 13-year NFL career moved along, he increasingly became more of a receiver than a runner.

“He was a carbon copy of me almost,” said Terry Metcalf. “He had the potential to break a big one every time he touched the ball and like myself he could do it many different ways. He was a multi-talented athlete, and you don’t find that much at all.”

Metcalf always enjoyed returning kicks and punts and set a career high with 1,218 kick return yards for Arizona in 1998. He finished his career with 10 punt returns for touchdowns and and two kick returns for scores.

Metcalf’s 5-10, 190-pound stature benefited him because few defenders got a solid shot at him.

“To be so small in that frame, what he did at the college level and the NFL was incredible,” McCray said. “He played in the league 13 years, and to be that size was almost unheard of. Punt returners now don’t play offense like they did back then for their team. You had to account for him on offense and special teams as well.”

Though their styles were similar, Terry Metcalf took great pride in watching his son carve out his own niche in the NFL.

“Everybody said he had big shoes to fill, but he was just himself,” Terry Metcalf said. “I heard guys call him me and it was more out of respect. They saw the same things.”

Back when she attended the University of Houston, Flo Hyman took a “Coaching Volleyball” course overseen by her own coach, Ruth Nelson.