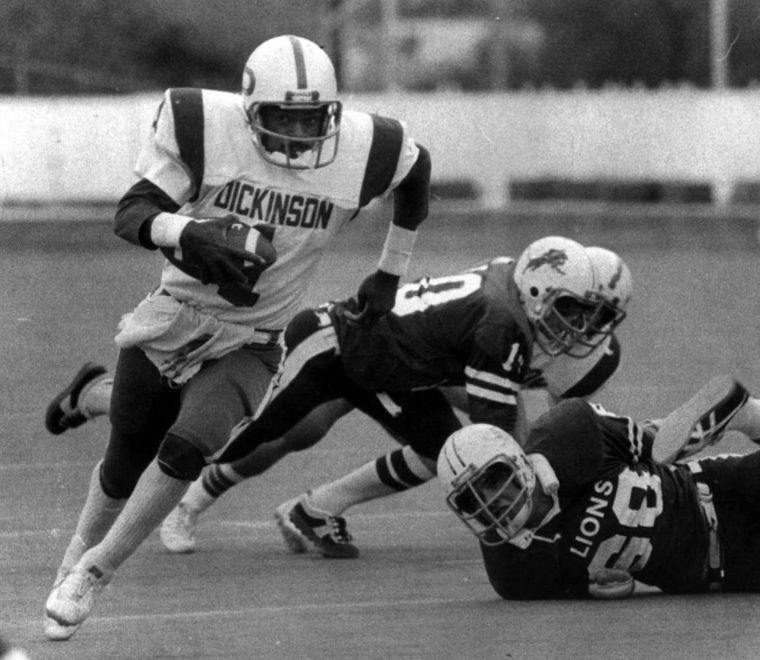 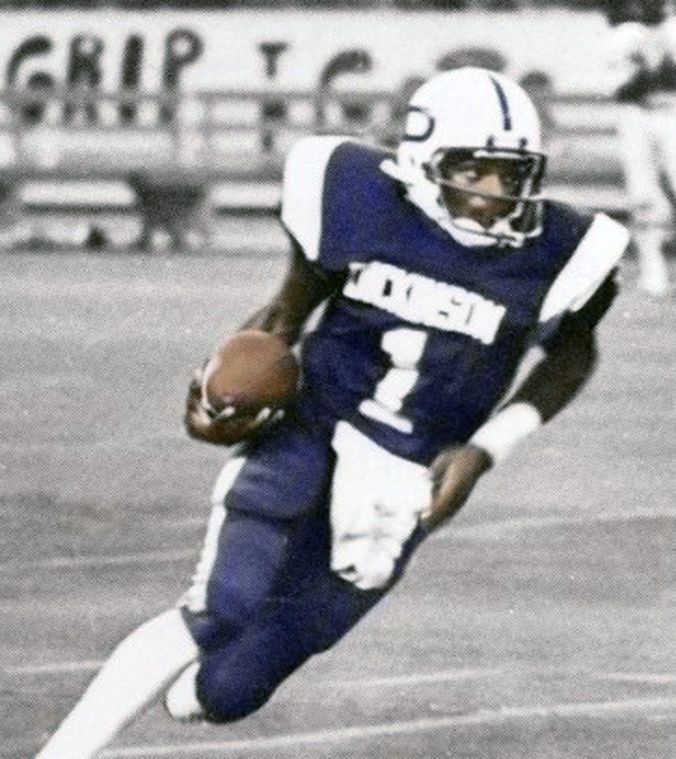 Donnie Little led Dickinson to the 3A title in 1977.

Donnie Little led Dickinson to the 3A title in 1977.

Donnie Little is remembered by most longtime Southwest Conference fans as the first black quarterback to start for the Texas Longhorns.

But before his groundbreaking moment for the Longhorns, he led Dickinson High School to the 1977 Class 3A state championship. The dual-threat phenom hasn’t been forgotten, as he will be inducted into the Texas High School Football Hall of Fame at 6 Saturday night at the Ferrell Center.

Little didn’t play high school football until his junior year after new Dickinson coach Teddy Gray persuaded some of the black basketball players to give it a shot.

“The black and white people in our community were divided,” Little said. “The stereotype was that if you were a banker’s son or someone important you got to play running back or quarterback, and guys didn’t want to go out and play another position. The morale of the school was down.”

After Gray got the black players on board, it didn’t take long for Dickinson to become a premier football program. With Little stepping in at quarterback, Dickinson made the playoffs in 1976.

“Coach Gray told me that with my height and athletic ability I could help turn this thing around,” Little said. “He said I could play wherever I wanted, and he just wanted to put me in a position where I could excel.”

But Little and his teammates really made a statement in 1977 when they won the state championship. With Little guiding an explosive offense that averaged more than 40 points per game, the Gators finished the season 13-1.

Playing at Texas’ Memorial Stadium, the Gators captured the title with a 40-28 win over Brownwood, which was coached by the legendary Gordon Wood. In a scene right out of the “Remember the Titans” movie, the high school football team united Dickinson like never before.

“When we won state as a senior, you can’t imagine what it did for the community,” Little said. “Winning brought continuity and it spread like wildfire. When we came out of the tunnel at Memorial Stadium, I couldn’t believe there were that many people from Dickinson.”

Little helped pave the way for another Dickinson black quarterback to excel, as Andre Ware went on to win the 1990 Heisman Trophy for the Houston Cougars.

After becoming a hot prospect on the recruiting circuit, Little eventually chose Texas over Oklahoma. He knew the Longhorns had never started a black quarterback, and he said he wanted to break new ground.

Little quickly made an impact, as he shared time at quarterback with Randy McEachern as a freshman in 1978 and got the majority of the snaps in 1979 when he led the Longhorns to a 9-3 record. But Little admits that being Texas’ first black starting quarterback carried some unrealistic expectations.

“Times were changing, and I wanted to be a pioneer and make an opportunity for others,” Little said “But expectations were far more than realistic. I wasn’t supposed to get tackled or fumble. I was supposed to score and do great things. If you were going to lead a distinguished university, you had to be exceptional.”

With Little running the offense again in 1980, the Longhorns won their first five games, but dropped five of the last seven. Little passed for 2,067 yards and rushed for 1,306 in his first three seasons at Texas, but volunteered to move to wide receiver as a senior in 1981 because he felt it would be his best shot at an NFL career.

Little finished his senior year with 18 catches for 338 yards and three touchdowns but he didn’t get drafted by an NFL team. He signed with the Ottawa Roughriders and played four years in the Canadian Football League before a knee injury ended his career.

Little returned to Texas for 24 years as a fundraiser for the Longhorn Foundation before taking a position recently with the Roger Beasley Automotive Group. He’s married and has two sons and lives in Round Rock.

After Little opened doors to become the Longhorns’ first black starting quarterback, he was excited to see others follow like James Brown in the mid-1990s and Vince Young a decade later.

“I was proud of Vince Young but even more proud before that of James Brown,” Little said. “I was proud of their accomplishments, proud that they didn’t have to go through some of the stuff I went through. There was more of an acceptance by then.”

NOTE: This is the last in a series of features on the 2013 class of the Texas High School Football Hall of Fame. The rest of the class includes Joe Boring, Eddie Foster, William Thomas, Graham and Sam Harrell, Wes Danaher and Dr. J.P. Bramhall.