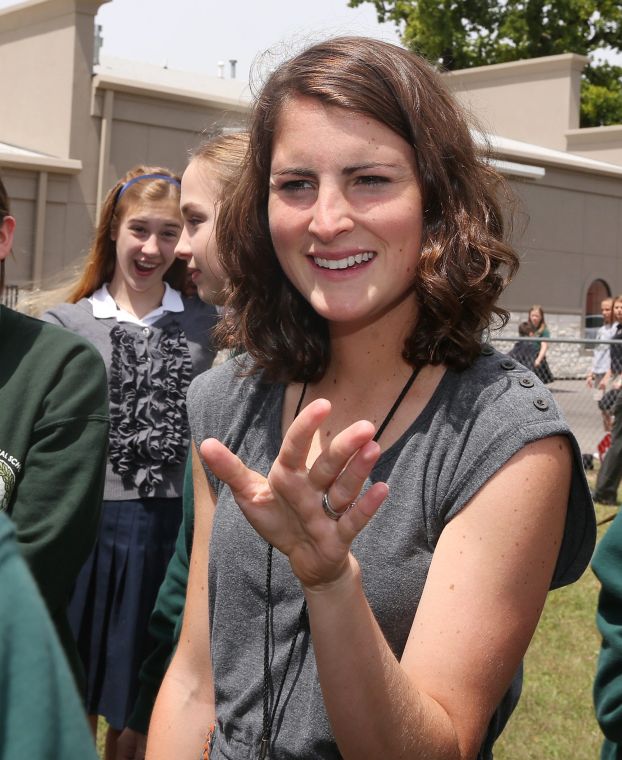 Staff photo-Rod Aydelotte Sabrina Little, a Live Oak teacher who is going to Europe this week to compete in the ultra-marathon world championships is treated at her sendoff party Monday. 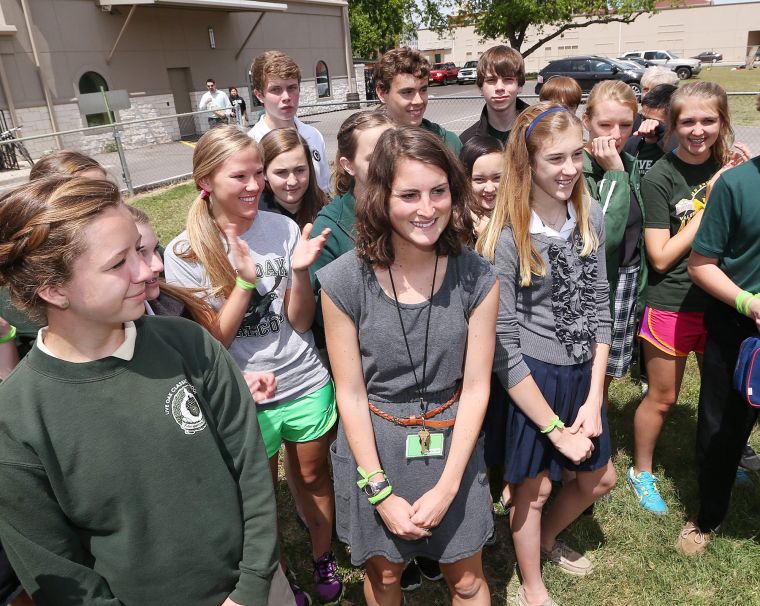 Sabrina Little (center), a Live Oak teacher who is going to Europe this week to compete in the ultra-marathon world championships, is treated to a sendoff party Monday.

Staff photo-Rod Aydelotte Sabrina Little, a Live Oak teacher who is going to Europe this week to compete in the ultra-marathon world championships is treated at her sendoff party Monday.

Sabrina Little (center), a Live Oak teacher who is going to Europe this week to compete in the ultra-marathon world championships, is treated to a sendoff party Monday.

Anyone driving around town has undoubtedly seen a sticker that says simply 26.2.

Those who have them on their cars use that as a badge of honor, indicating they have been able to complete the grueling challenge of running 26.2 miles in a marathon.

That serves as nothing more a warmup for Sabrina Little, one of the nation’s top ultramarathon runners.

On May 11-12, Little, a teacher at Live Oak Classical School, will join Team USA to compete in the International Association of Ultrarunners 24-Hour World Championship in Steenbergen, Netherlands.

Each of the 37 teams vying for the title — won by the Americans last year — will have six men and six women running for 24 hours on a paved track. Whoever has run the longest distance at the end of that

Live Oak brought its student body together to send Little off and wish her well Monday. Her eighth-grade students released 24 green balloons into the air, one for each hour she’ll run.

Little missed the event last year because it was the same week as she got married to her husband David, so she’s excited about the opportunity and having him with her. She said her goal is to break her personal record in a 24-hour race of 148 miles. Specifically, she wants to top the 150-mile mark.

“I didn’t feel perfect that day,” Little said. “Hopefully if things go well, I can pick it up in the earlier half. . . . If it goes well, I could be competitive and hopefully (get on the) podium, but if not, probably not.”

Little’s interest in covering long distances on foot began early in her life.

She ran her first marathon at the tender age of 8, and she went on to compete in college in cross country and track at William and Mary.

But it was in her sophomore year that she found her true calling of going beyond the traditional marathon.

“Right after my freshman year was my mom’s third year of being in remission from cancer, so I ran a hundred miles as a fundraiser to the National Ovarian Cancer Coalition and I ran it in what nationally was a very good time,” Little said. “So I just kept doing it, raced more and more and got into it.”

She said the longest she’s ever run at any one time is 180 miles. She runs two or three times a day and often documents her running and teaching adventures on at notallergictoadventure.blogspot.com.

While running for a full day is a difficult prospect physically, she said the mental fatigure can be just as difficult to deal with.

She’s overwhelmingly popular among her students — if the number of hugs she received during Monday’s sendoff is any indication — despite having only been at Live Oak for a short time as an eighth-grade English and physics teacher,

She is also coaching the school’s long-distance runners, and her athletes are proud to have her.

“It kind of intimidated me (that Little runs so many miles) because I only run two in the races,” junior Elizabeth Bailey said. “I thought it was amazing that we were going to have her as a cross country coach and a track coach because you can definitely see that she has a ton of experience.”

Because of her petite stature, she doesn’t look like a prototypical athlete.

That even caused a bit of a mistaken identity for at least one student during the summer before the school year began.

“She was going to be one of our helper coaches before next year, when she is going to be our head coach,” seventh-grader Timothy Bierwirth said. “So she came to a couple of the practices, but it wasn’t until a couple weeks later that I realized she wasn’t a new student. She was actually a runner, the best ultramarathon runner in the nation.”

Of course, even the best have misadventures, and Little experienced hers at the UltraCentric 24-Hour, which serves as the Texas state championship in Grapevine.

Sometime during the night portion of the race, she began to grow sleepy but didn’t stop. Instead, she decided to make a try and make the best of it.

“I was tired from teaching and lesson planning, so when we got out there I was pretty sleepy to begin with,” Little said. “So it was a battle all day. I was playing a game where I would keep my eyes closed to rest them while I was running, and then I just tumbled into the bushes. After that, I was awake and could keep going, and I won the race outright still.”

No matter what happens at the world championships, she said she’s happy to have the support of David and thanks Live Oak for letting her follow her ambitious dream.

“I’m very excited for her,” Bierwirth said. “I would be very thrilled if she got a personal record, because 148 is a ton. I’m thrilled for her to be in the world championships, and I hope she’ll do very well in it.”