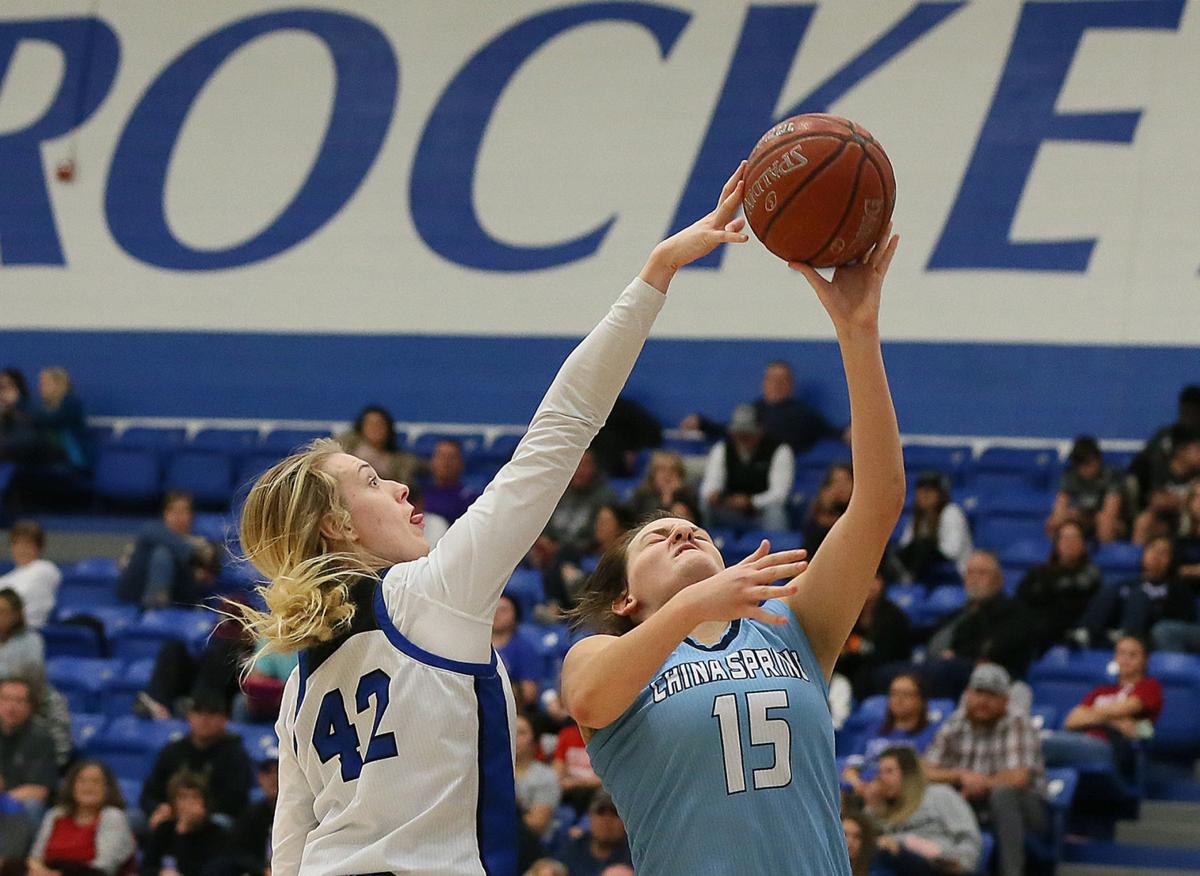 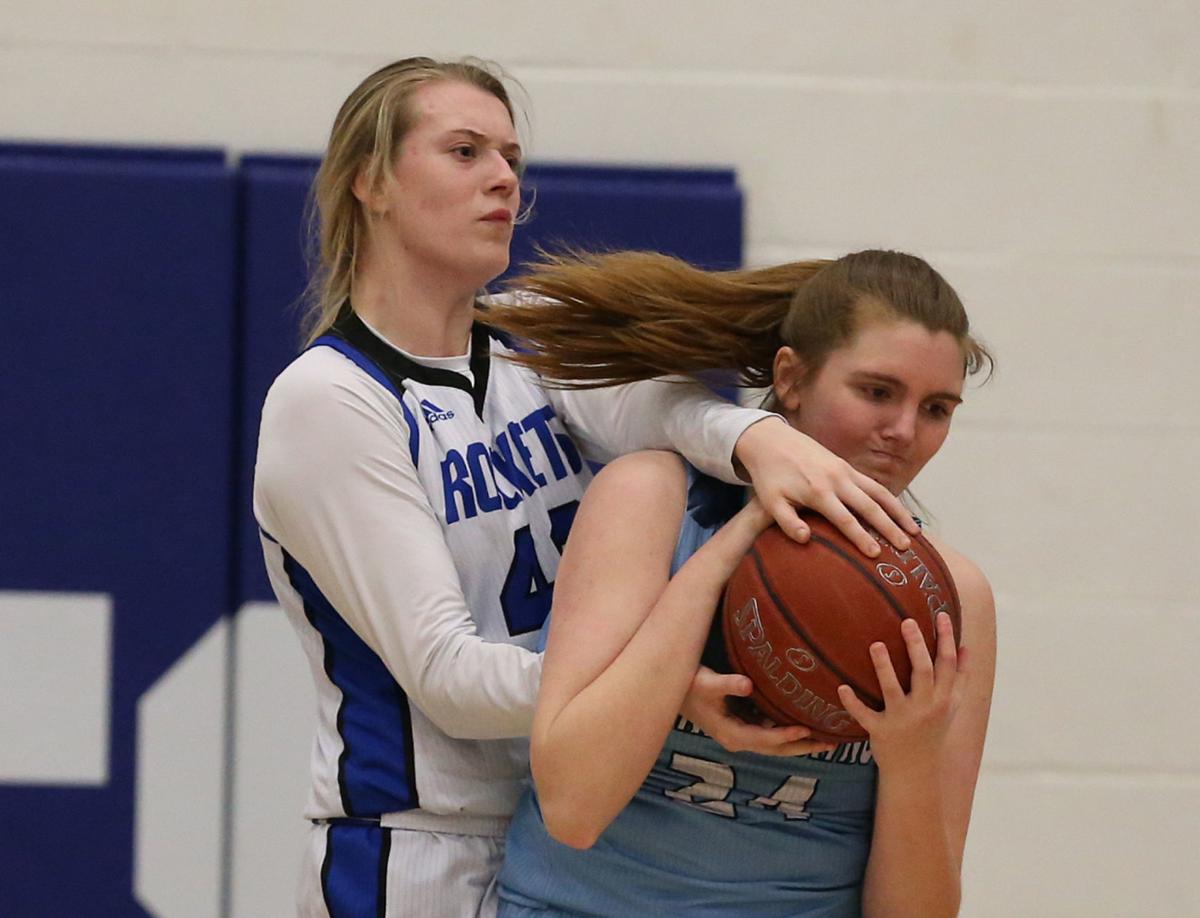 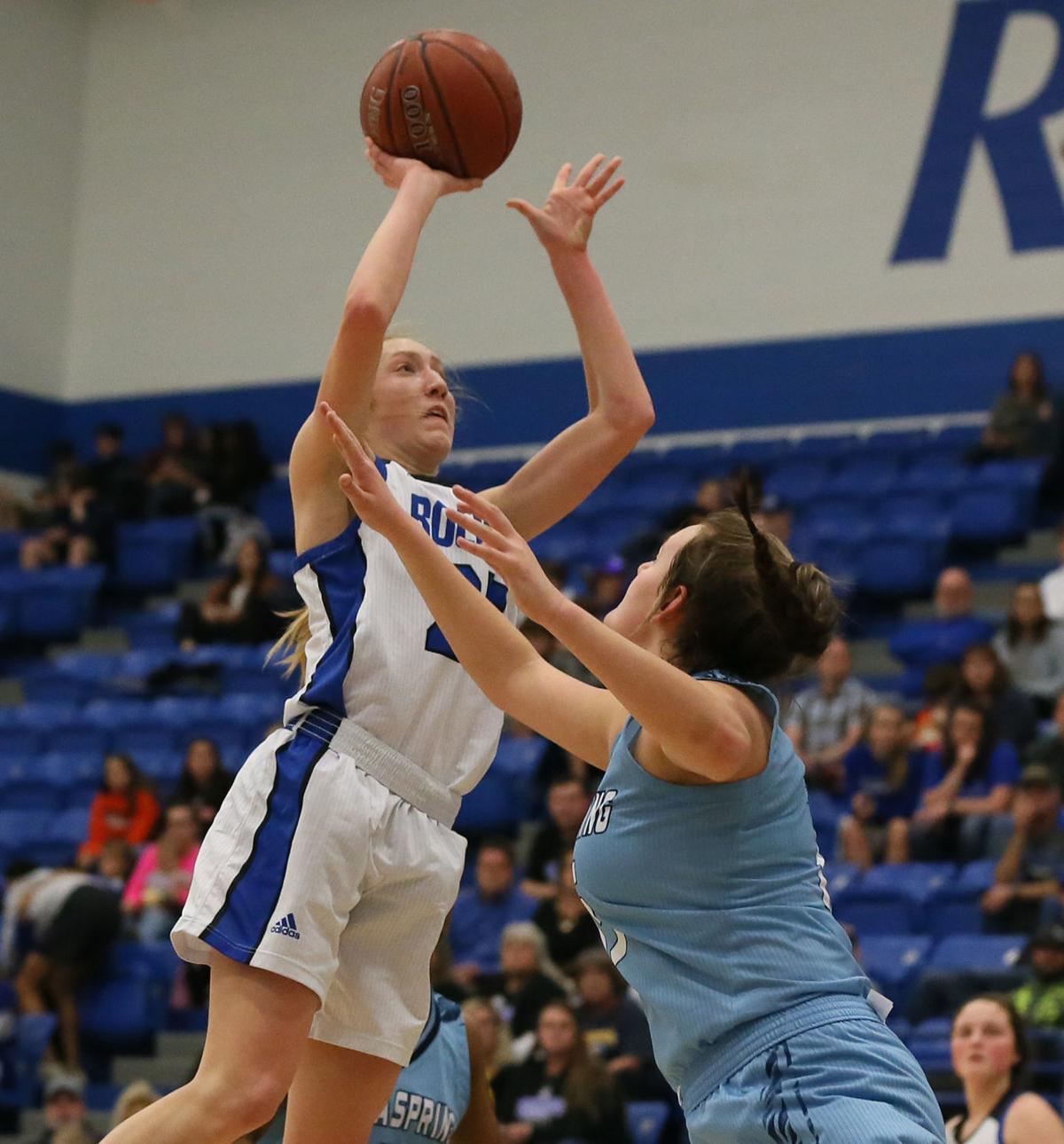 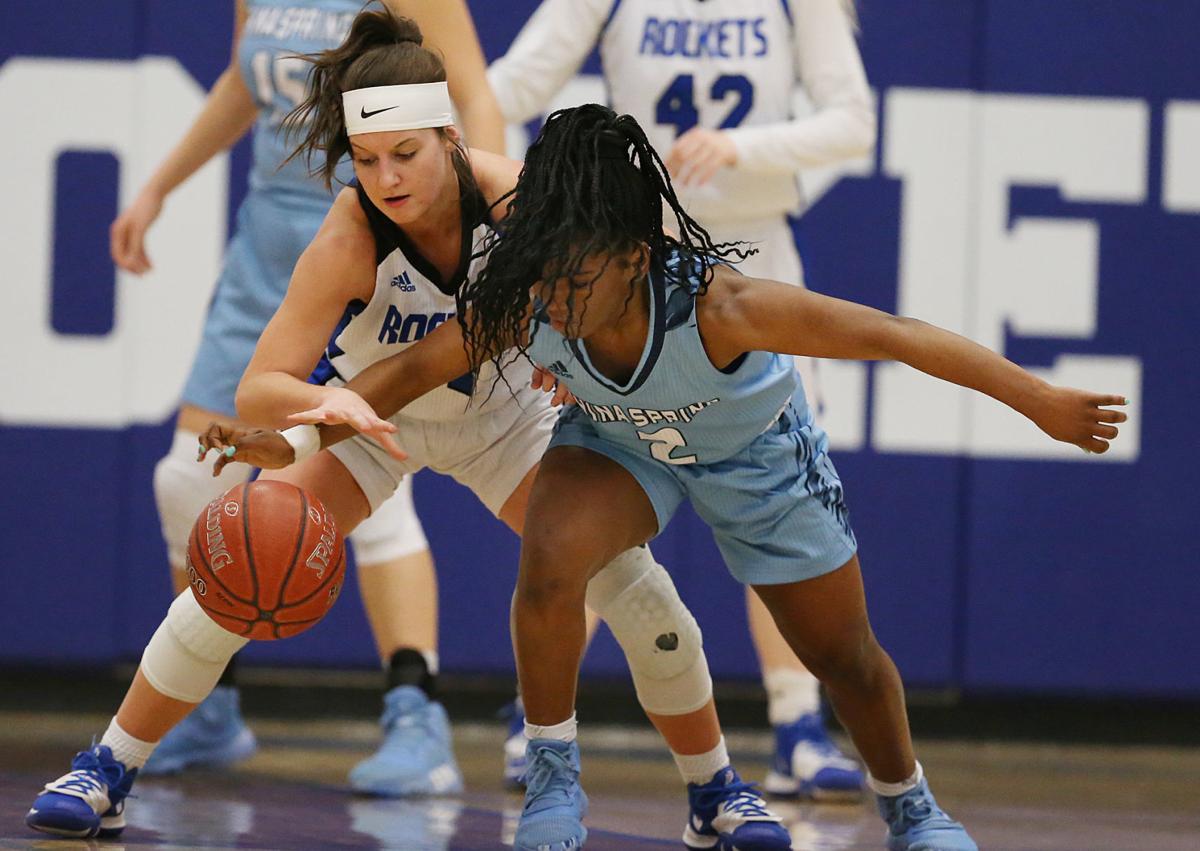 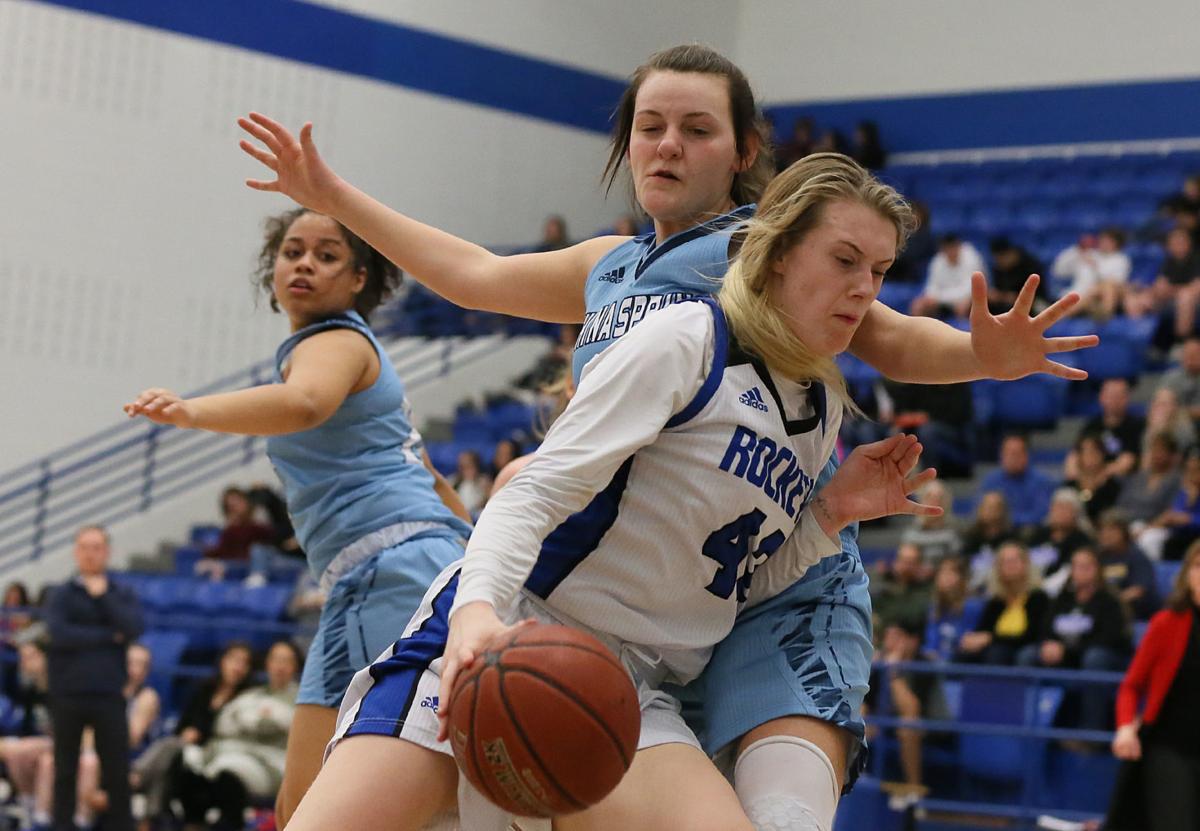 Robinson's Madison Crowson drives the lane while being guarded by China Spring's Brylee Smith, rear, in the first half. 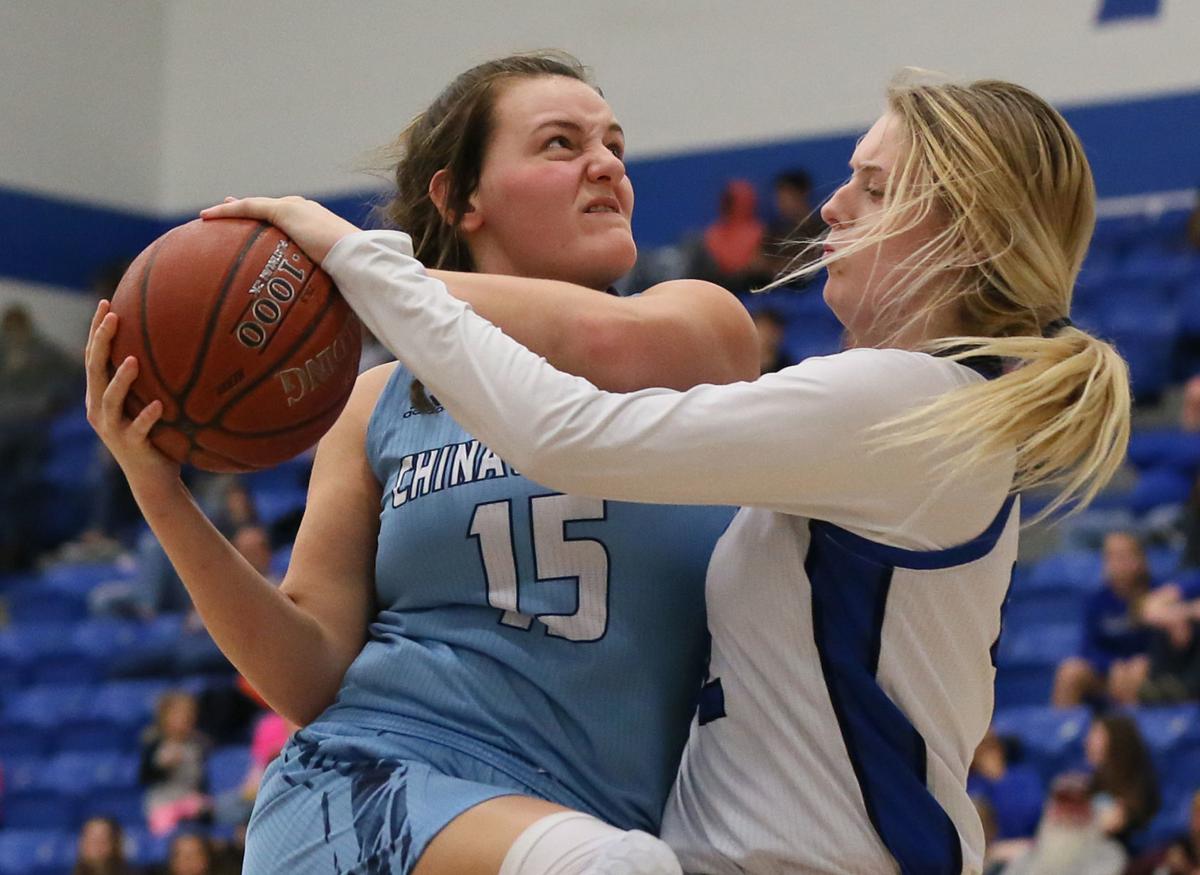 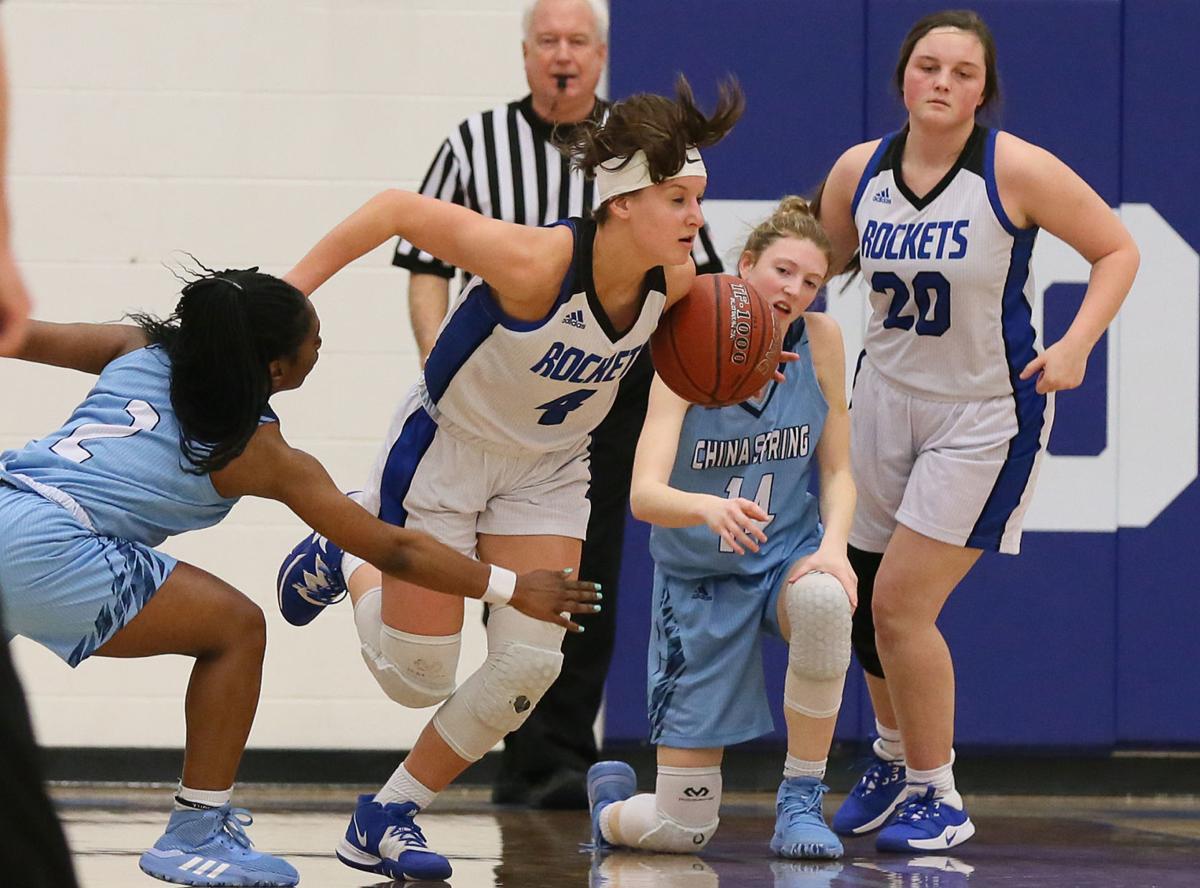 Robinson’s Brenna Welsh, center, bring the ball up court past China Spring’s Mochieyveon Hobbs, left, and Kendall Richards, right in the first half.

Robinson's Madison Crowson drives the lane while being guarded by China Spring's Brylee Smith, rear, in the first half.

Robinson’s Brenna Welsh, center, bring the ball up court past China Spring’s Mochieyveon Hobbs, left, and Kendall Richards, right in the first half.

You could probably rename every gym in District 18-4A the Grindhouse, because that’s the kind of game you’re going to get virtually every night.

Robinson’s girls are not letting the grind get to them.

The Rockettes displayed rugged toughness in wearing down China Spring, 37-32, in a key district game for both teams on Friday night at the Robinson Gym. With the win, Robinson (12-16 overall, 7-2 district) positions itself on the doorstep of glory. If the Rockettes can knock off Gatesville (20-12, 6-3) in their regular-season finale next Tuesday, they’ll be the outright district champs. A loss to the Lady Hornets would lead to a tie atop the standings between those two teams.

Robinson held China Spring without a point the final 2:20 of this one, and first-year Rockettes coach Will McKethan was pleased as punch with his team’s aggressiveness on defense.

“I think in the fourth quarter when it’s a tight game you have to grind it out,” McKethan said. “We did a great job making them use 40 seconds to get a shot that wasn’t really a quality shot, and really milk the clock down while we had a six-point lead.”

In round one between these clubs on Jan. 21, Robinson was able to escape with a 38-37 win over China Spring (11-13, 5-4) on the Lady Cougars’ home floor. So in the sequel bout, everyone figured the fight would go all the way to the very end.

That was exactly the case. The post matchup between China Spring’s Brylee Smith and Robinson’s Madison Crowson was a fun and feisty one, and both players managed to come up large for their teams while staving off a potentially disqualifying fifth foul.

Smith knocked down a 15-foot jump shot with 2:20 to play that brought her team to within 33-32 of the Rockettes. But China Spring wouldn’t score again. On the next trip down, Robinson’s heady guard Brenna Welsh drew contact from Smith to register the fourth foul on the China Spring standout, then knocked down a pair of free throws to extend her team’s lead to three points.

China Spring continued to put Robinson on the line in the final 90 seconds, and even when the Rockettes didn’t convert on the free throws, they somehow still managed to make it all work out. With 30.4 seconds remaining, Welsh missed two freebies, but the always-energetic Brooke Ashcraft swooped in for the offensive board, prompting another China Spring foul and stoppage of the clock four seconds later.

Ashcraft gave her team quality minutes throughout the night, finishing with eight points and a game-high 11 rebounds.

“We put her in the high post or outside as a guard, and she’s just so active,” McKethan said of Ashcraft. “We tell our players all the time, (the fans) buy all the tickets, if you’re on the court, you’re playing. And she stays ready, she does a great job.”

China Spring’s Smith and Robinson’s Crowson essentially battled to a standoff in the big girl matchup. Smith finished with 11 points and 10 rebounds for the Lady Cougars, while Crowson scored 12 points and secured 10 boards for the Rockettes.

Neither team ever ran away and hid from the other. China Spring took an 11-7 lead after Abi Ogle’s putback with about six minutes to go in the first half. But the Rockettes outscored the Lady Cougars, 8-2, the rest of the quarter to take a 15-13 lead into the halftime break. That spurt was aided by a pair of runout layups by Ashcraft, who couldn’t be caught when she had a full head of steam.

The win was obviously a crucial one for Robinson, though McKethan still wants his team to smooth out some of its rough patches.

“Our consistency level just has to grow,” he said. “Sometimes we look fantastic, and other possessions we’ll look completely lost. Just valuing the ball is something we’re still learning to do. When you play China, they’re going to battle. They’re going to cover the paint, challenge your shots, but we played hard.”

Welsh chipped in 10 points for Robinson, including a pair of 3-pointers. After Smith, China Spring’s next highest scorer was Kayla Peoples, who tossed in six.

China Spring drops from second place into a tie for third with La Vega, with Lorena a game back. The Lady Cougars will close out the regular season with a home game against La Vega on Tuesday. If they win, they’ll clinch a playoff spot and the district’s No. 3 seed. A loss and a Lorena win over Connally would create a tiebreaker situation for the district’s fourth and final playoff spot, since Lorena and China Spring split their season series.

“You get a little bit of everything in our district, which is what you want. Our pre-district was incredibly tough, so we really feel battle-tested,” McKethan said. “We just want to make sure we’re peaking now. If we hit a wall, that’s our fault, we’ve got to peak.”