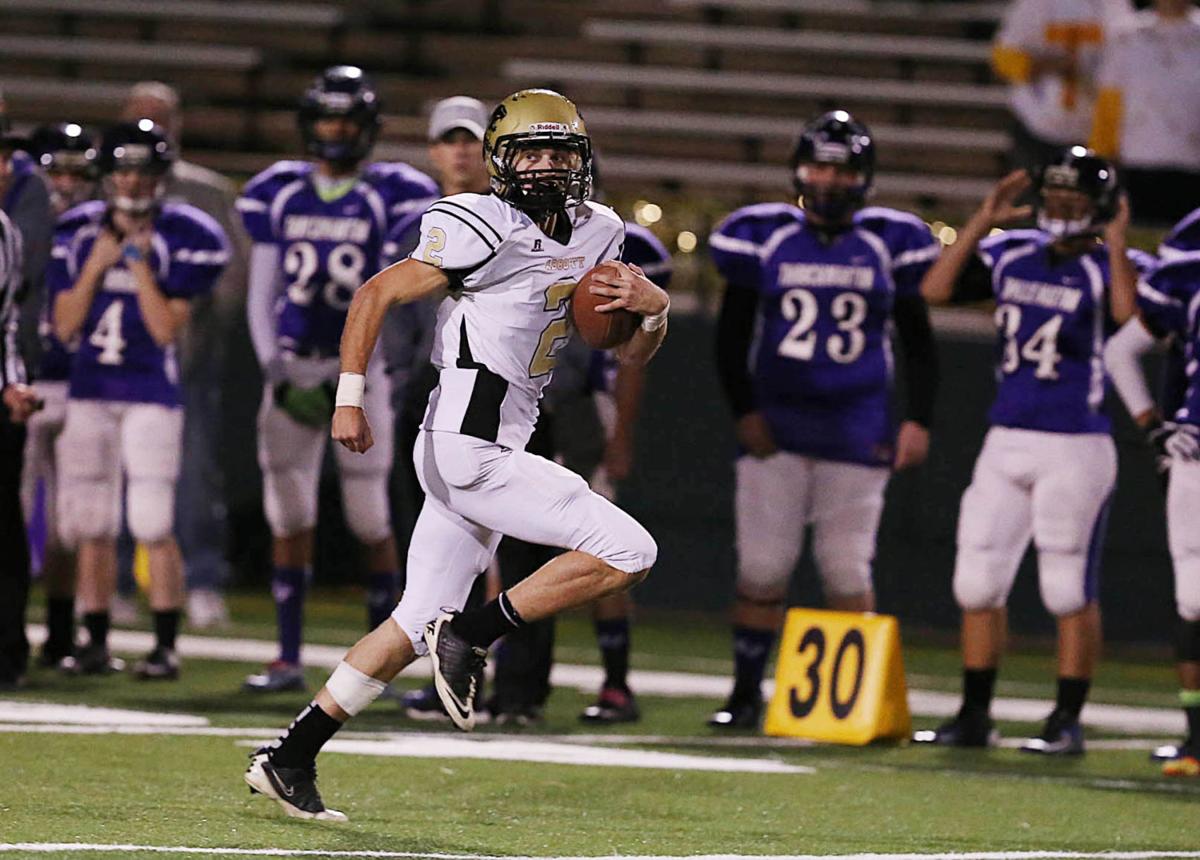 Abbott back Tyler Russell (2) scores past Throckmorton in the first half of the Six-Man Div I state championship game in 2012. 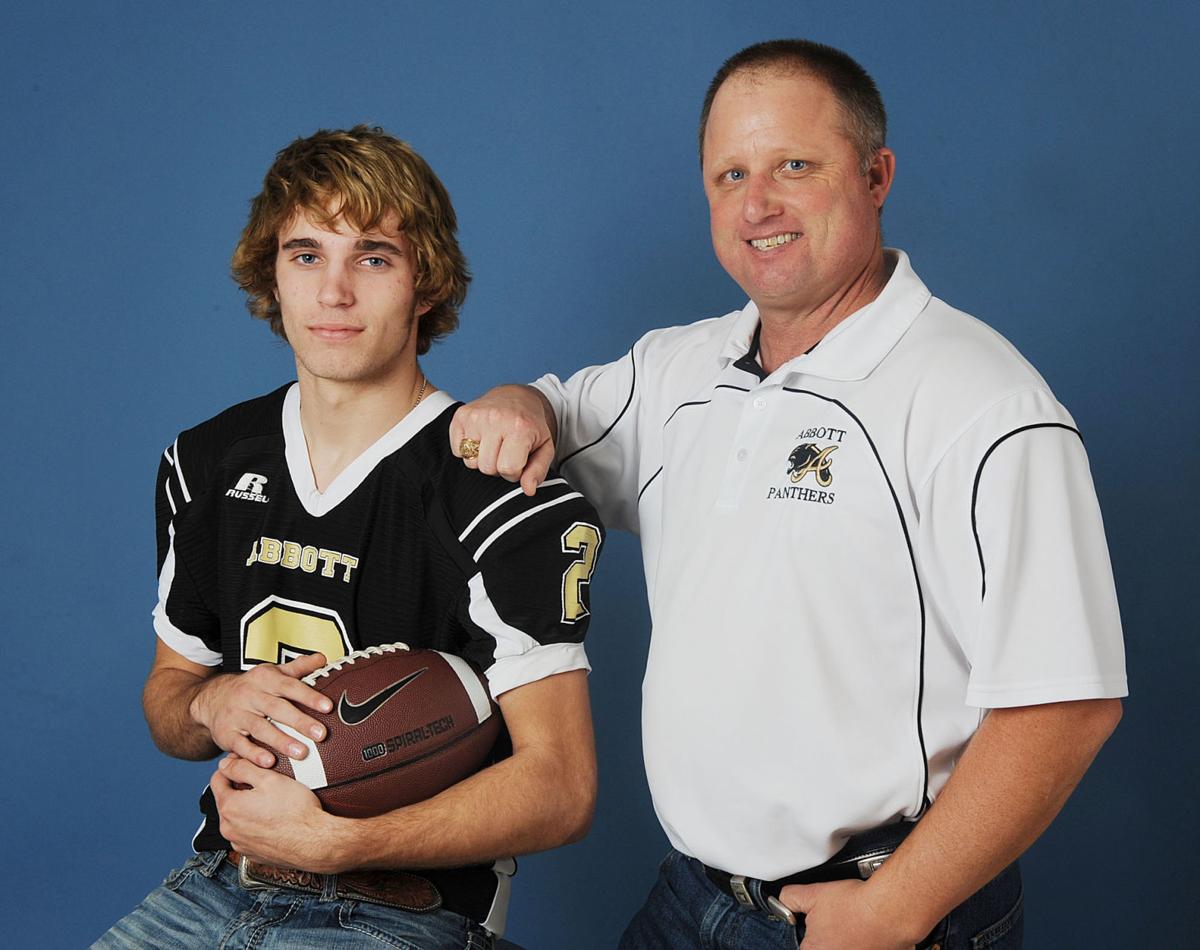 Abbott’s Tyler Russell (left) and Terry Crawford swept the Super Centex Six Man Player of the Year and Coach of the Year awards in 2011 and 2012. 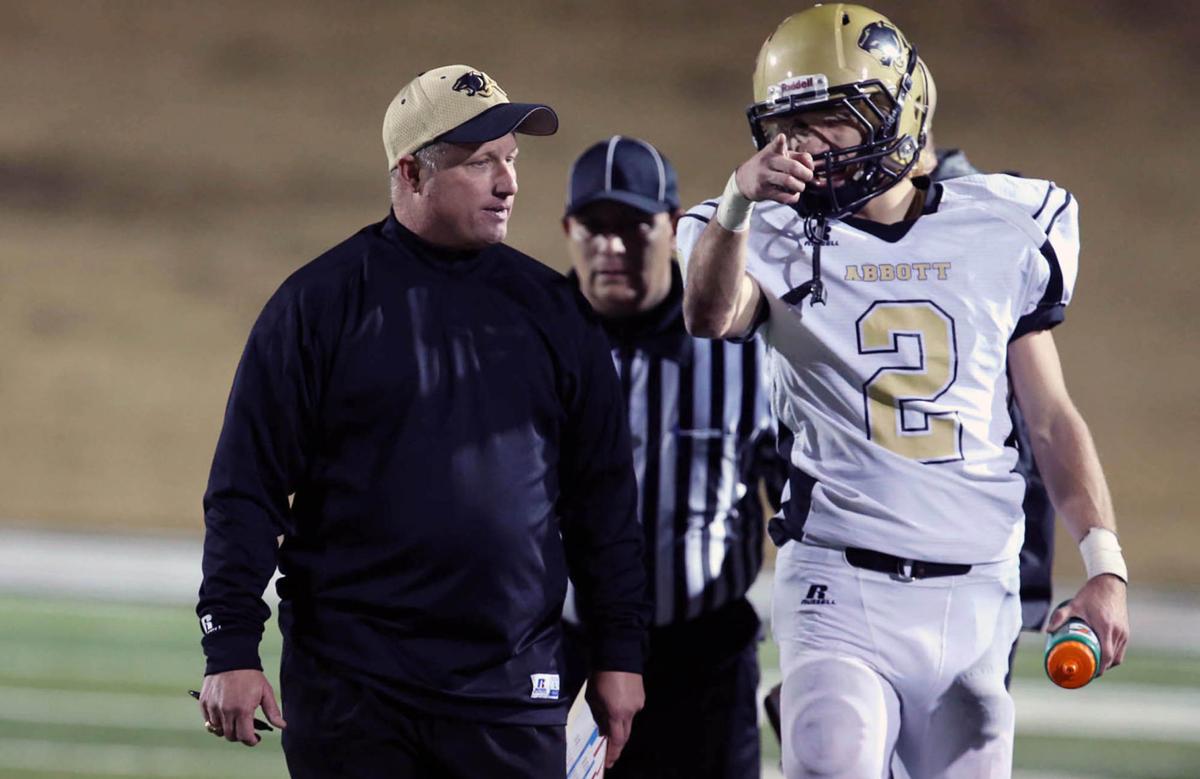 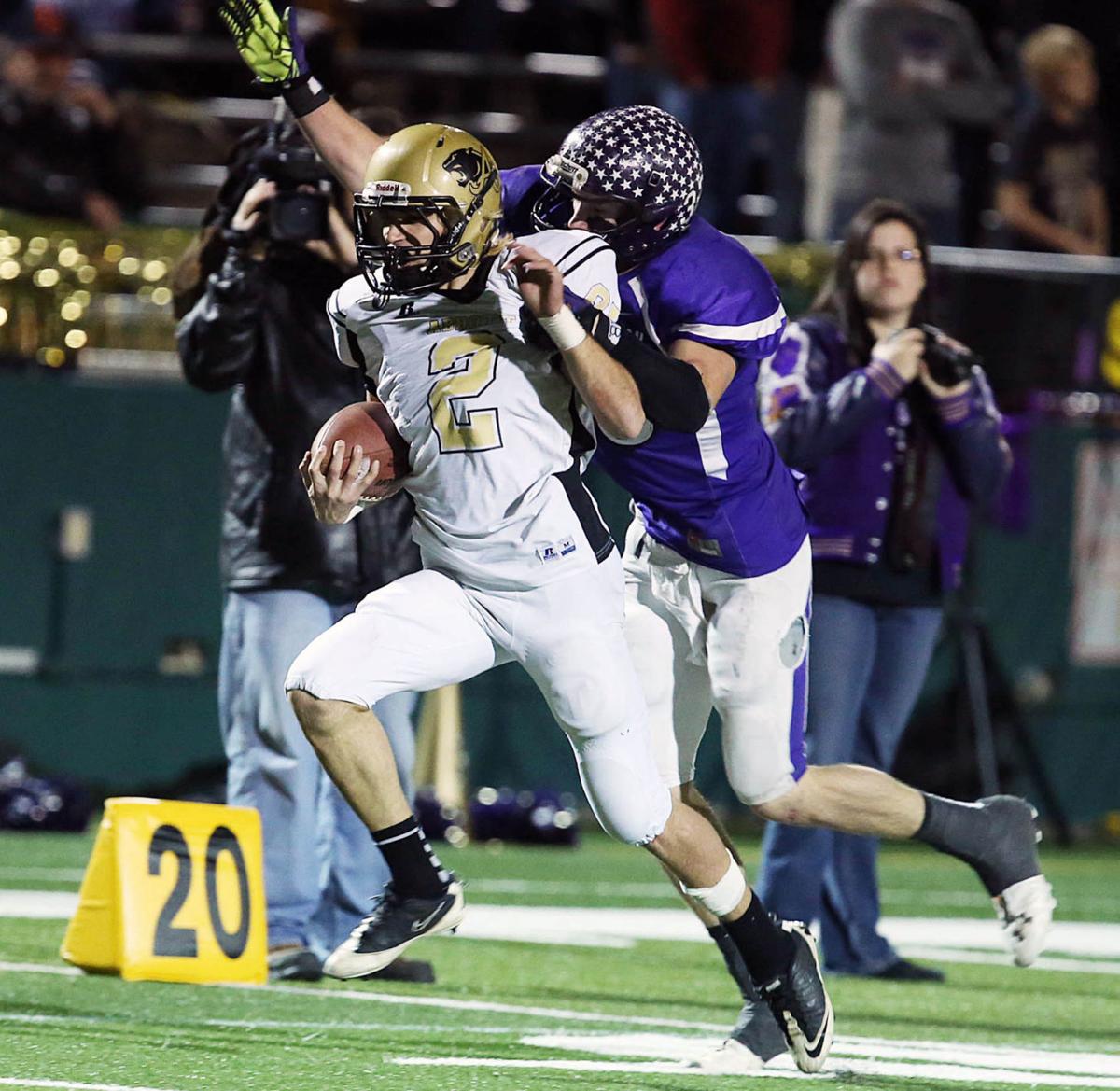 Abbott back Tyler Russell, left, runs away from Throckmorton in the first half of the Six-Man Division I state championship game in 2012.

Six-man football has historically been a sport played out in the country, a long way from the bright lights in the big cities.

In the last decade, however, fans who love six man can experience and enjoy it just about anywhere. Such was the case when Brad Russell and his cousin Tyler Russell were watching the 2015 Six-Man Division I state championship game on a computer in Las Vegas.

The Russells were in Nevada to take in the National Finals Rodeo, but the former Abbott football players couldn’t resist cheering on the Panthers from afar.

Meanwhile, at Shotwell Stadium in Abilene, Abbott had a missed some opportunities to score in the first half and held a narrow 14-8 lead over Crowell as the teams went to the halftime locker room.

“For some reason, I looked at my phone and I had a text from a former player,” Abbott coach Terry Crawford said.

The text was from Brad Russell’s phone, but it more than likely shared the group sentiment from that watch party in Vegas.

“He said something that really resonated with me,” Crawford said. “He said ‘Just pound ‘em coach.’ I went in and I thought, ‘You know, he’s right.’ I told the kids at halftime, ‘Look, here’s what we’re going to do. All these special plays we put on, bull crap. We’re going to do what we do. We whip the guy across from us. If you will whip the guy across from you, we will start putting the ball in the end zone.’”

The Panthers got the message.

Abbott scored 26 points in the second half and claimed the school’s first football state championship with a 40-30 victory over Crowell.

Crawford, the Super Centex Coach of the Decade for the 2010s, made a habit of trusting his assistant coaches and even former players along the way.

The Panthers posted a 13-2 record and had seven games that were decided by less than 20 points in their championship run. Six man football is usually a high-scoring affair dictated by the offense. But the Abbott defense came through just as often.

Like when the Panthers faced a great Zephyr team in the state semifinals.

“They had a big running back and we worked all week on key reads and get up the field and hit him in the backfield,” Crawford said. “That’s the best I’ve ever seen. We were in the backfield all night long. We were just technically, technically sound. I give a lot of credit for that to Cooper Thornhill and Kyle (Crawford), who were the defensive coaches at the time. We were super prepared.”

Crawford was the Super Centex Six-Man Coach of the Year in 2011, 2012 and 2015. Abbott reached the state finals twice in the decade with the 2015 championship following a runner-up finish in 2012.

The Panthers made it to the pinnacle because of the groundwork done earlier in the decade when they ran behind prolific back Tyler Russell.

“Tyler was one of those kids that if you looked at him and judged him by his stature, you would go, ‘This kid is not a football player.’” Crawford said. “Tyler was just a lanky, skinny kid. His appearance was really misleading. But Tyler was a competitor. He hated to lose and when you get a kid that hates to lose, he’s going to compete until he wins.”

It turned out that Russell’s unique frame made him an ideal ball carrier. He excelled in doing the things the Panthers offense was designed to do, and then he took over from there.

“We like our tailbacks to run downhill. Tyler had a tendency when he got downhill, he wanted to stop and change directions,” Crawford said. “He’s one of the reasons I tell everybody there’s an exception to every philosophy or belief that you have. He could stop on a dime and change directions and accelerate as fast as anybody I’ve seen. He would get in the hole and do exactly what you wanted him to do. That’s what made him really special.”

Russell, the Super Centex Six-Man Player of the Decade, put up astonishing numbers during his four seasons in the Abbott backfield. He rushed for 8,173 yards and 41 touchdowns. On defense, he contributed 191 tackles and five interceptions during his junior and senior seasons.

The Panthers and Russell hit their stride during the 2011 and 2012 seasons. Abbott posted a 23-6 record in those two years, advancing to the state semifinals in 2011 and the state championship game in 2012.

Russell was the Super Centex Six-Man Player of the Year in both of those campaigns.

“I was a just a small little feller. I would run downhill and I’d make you miss if I had to,” Russell said. “I just thrived off of it, really. I loved getting the ball. I knew I was going to get the ball 30, 40 times a game and I loved the pressure. I still love the pressure, whether it’s playing golf or whatever. It’s something that never has gone away.”

Although Abbott fell short in the state final in Russell’s last game, he said the one thing that he still carries with him is the camaraderie the Panthers shared.

“I’d just like to thank all my teammates because we all had a great time,” Russell said. “We really all had a good time together and we loved playing football. I know that. It just built friendships, honestly.”

Here’s a look at the rest of the Super Centex All-Decade Team:

Longtime Waco sportswriter and Texas Tech graduate Chad Conine is the author of "The Republic of Football: Legends of the Texas High School Game" and "Texas Sports: Unforgettable Stories for Every Day of the Year," among other titles.