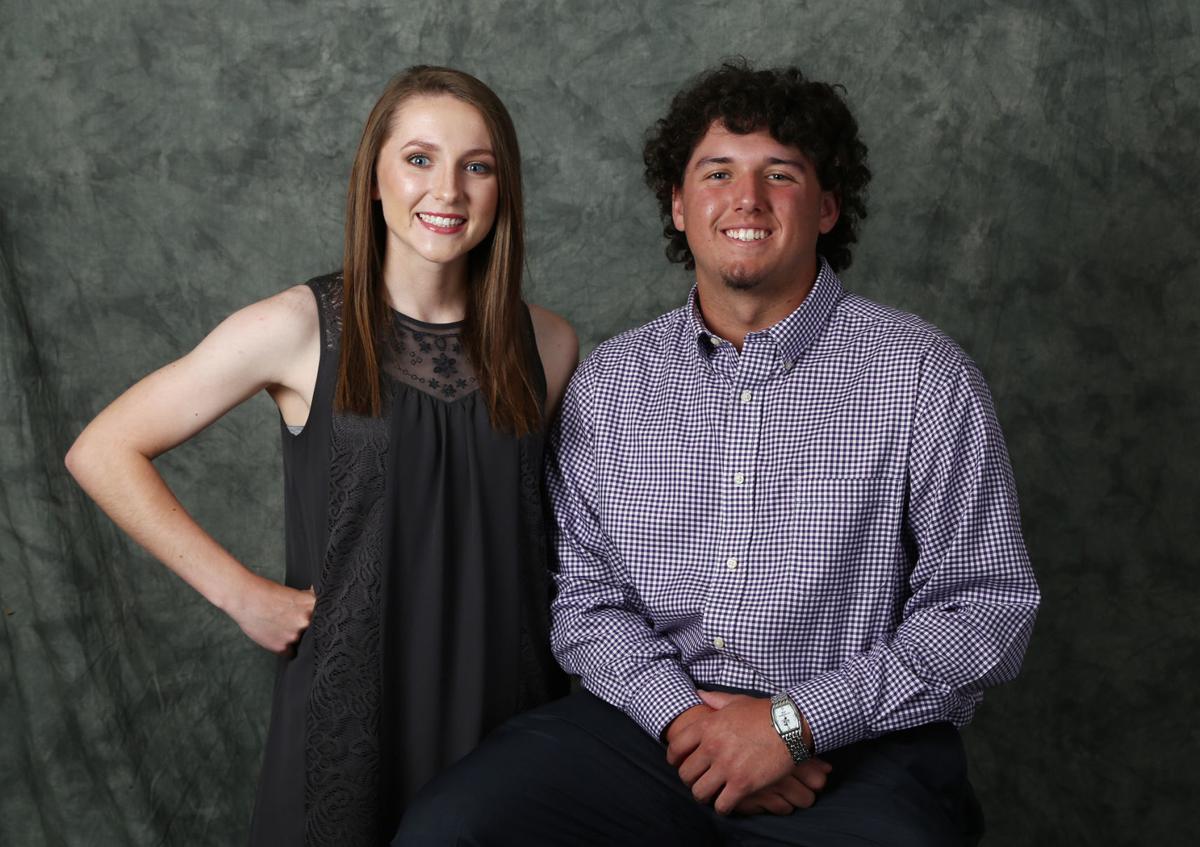 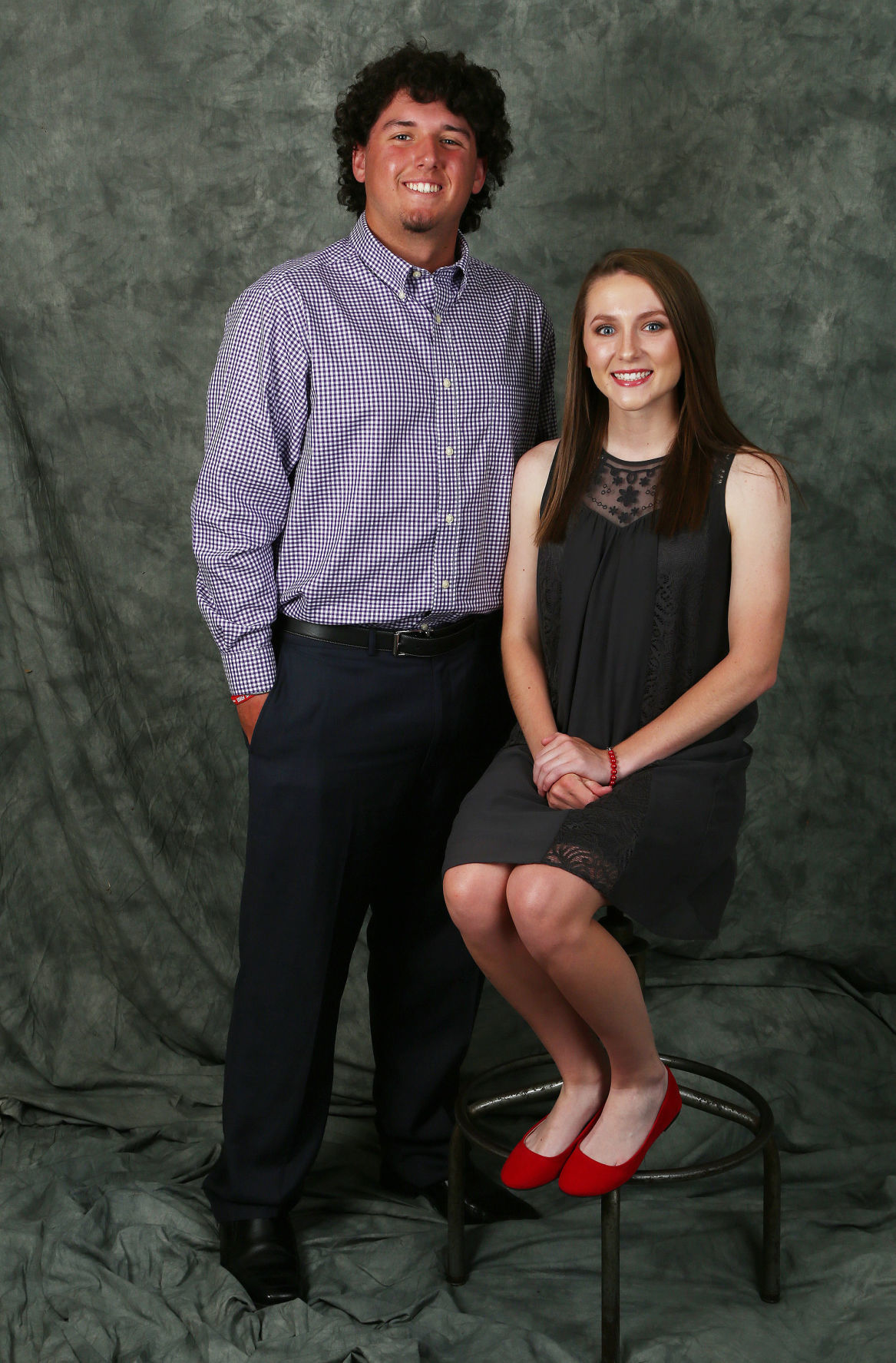 University’s Dylan Chapman and Abbott’s Mallory Ballew never let their heavy athletic schedules get in the way of performing at a high level in the classroom.

They always understood that it takes a lot of work in both areas to excel.

“It’s difficult at first but you have four years to get the hang of it,” Chapman said. “Once you get into it you learn how to balance your schedule and everything. It just kind of becomes what you do.”

That dedication paid off as Ballew and Chapman earned the Tribune-Herald’s Student-Athletes of the Year honors on the annual Super Centex All-Academic team.

Ballew was Abbott’s 2018 valedictorian while Chapman finished third in his class at University. Not only did they compete in sports and excel academically, they contributed to a multitude of community service projects.

Ballew credits the Abbott school administrators and coaches for providing an ideal atmosphere for athletics and academics.

“The administration at Abbott is amazing,” Ballew said. “They’ll work with students and make sure you get your stuff done. But of course to a certain point it’s the student who needs to get their work done. The coaches do the same as the teachers, so it’s a good balance.”

Attending a Class 1A school gave Ballew the opportunity to play all the sports she wanted. She took full advantage of it by competing in cross country, track, volleyball and basketball.

“I have some friends at a 3A school who had to choose between two (sports), but at Abbott we can do almost whatever we want,” Ballew said. “It helped me push myself and learn how to manage my time. Through all of it I actually had a lot of fun with friends. I wouldn’t have wanted to go to any other school.”

Ballew’s best sport was cross country as she reached the state meet as a senior and posted a personal best time of 14 minutes and 25 seconds over two miles.

“Each sport has had its ups and downs, but I’d have to say my favorite was cross country,” Ballew said. “It challenged me. My freshman year I set a personal record. Then I went through a slump my sophomore and junior years, and I always told myself I want to break it. I finally did it this year. Getting older, I just wanted to set an example for the younger groups.”

Besides her athletic activities, Ballew was in student government as she served as president and treasurer of the student council. She helped Abbott win UIL one-act play state championships and participated on successful debate and math teams. She was heavily involved in FFA activities.

Compiling a 121 scholastic average, Ballew topped a class of 21 Abbott seniors. In her eyes, anything below a 97 was a failing grade. With 18 hours of dual-credit courses under her belt, she plans to attend Texas A&M and major in horticulture.

“Ever since I was 8 years old, I’ve loved being in the garden with my grandmother,” Ballew said. “It’s odd that I have such a passion for plants. I’ve always wanted to share my passion with others.”

Attending a Class 5A school, Chapman chose to focus on baseball and was named a first-team all-district first baseman as a junior and senior. He hit .444 this season while playing flawlessly in the field and pitching.

Chapman’s passion for baseball came naturally since his father, Kyle Chapman, has coached baseball for the Trojans for the last two decades.

“I grew up with my dad being a head coach since before I was born, so I’ve just grown up around the game and loved it for as long as I can remember,” Dylan Chapman said. “It’s always been an intricate part of my life. The first time I played organized (baseball) was when I was 7, but I was in the backyard playing catch and hitting off the tee since I could stand up.”

Though Dylan always worked hard at becoming a talented baseball player, Kyle Chapman never had to push his son to concentrate on his studies.

“He’s always been a good student, even more than what he’s done athletically,” Kyle Chapman said. “As a family we’re more proud of his academics. He really has a passion for both. He had all A’s all the way through, we never saw a B on his report card. When he puts his mind to do something he wants to give it his best.”

Dylan has served as student council president and Challenge Team captain, and has participated in many volunteer projects.

“My uncle (Mike Chapman) is the head soccer coach at my high school, so he does a lot of stuff with his program like Meals on Wheels and Food for Families and doing stuff for kids in the hospital on holidays,” Dylan said. “I’ve always been involved with that with him. It’s something that’s really special to me. I think it’s great to be able to give back. I just love to see how I can affect other people.”

Planning to continue playing baseball at the collegiate level, Dylan hasn’t yet decided whether he’ll start at a four-year school or a junior college. But since he’s already earned more than 40 dual-credit hours, he will already be classified academically as a college sophomore.

Dylan plans to go into broadcast journalism, and has served an internship at ESPN Central Texas radio.

“My dream job would be in some form working for ESPN or MLB Network,” Dylan said. “I’d like to be either a play-by-play guy or somebody that sits in the studio and is an analyst. I love all the little things that people watching it don’t pick up on, the strategic advantages that the common fan doesn’t know about.”

Emily Jander, Lorena: Valedictorian and National Merit Commended Scholar was three-year letter-winner in both soccer and golf, playing on successful teams in both.

Koby Smith, Crawford: When he wasn’t participating in five sports or maintaining 4.0 GPA, Smith gave back through PALS, the Beta Club and the Fellowship of Christian Athletes.