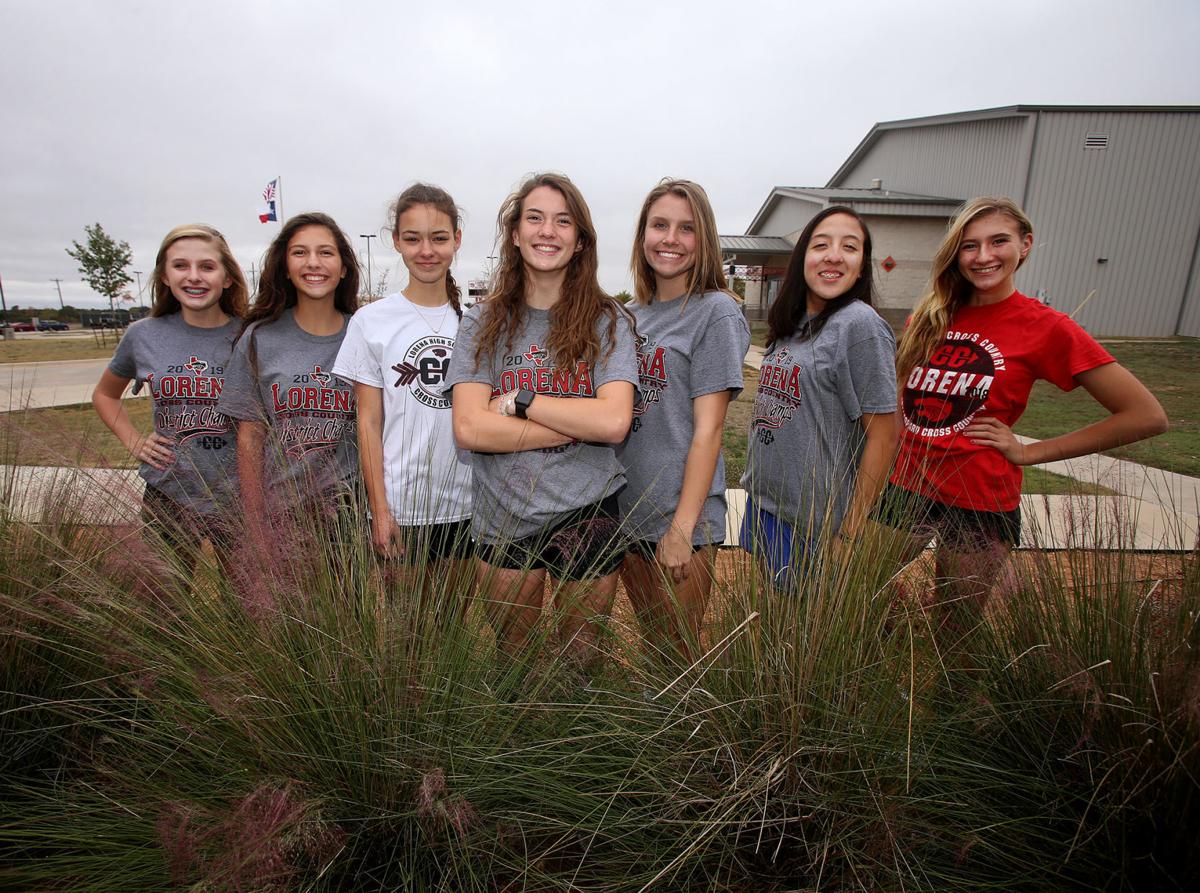 LORENA — For the runner, when the calves scream and the torso pinches and the wall feels a thousand feet high, you need something – or someone — to push you. You need a reason to break through that wall.

Lorena had that. Lord knows the Lady Leopards had it. They had motivation to spare.

Yes, last year. That’s really where the 2019 cross country season for Lorena began, back in the fall of 2018. That particular sisterhood of the traveling panters dreamed of reaching the state meet. The runners talked about it all year.

Then the Region III-4A meet came, and the Lorena team ran with gusto. But not quite well enough – as the Lady Leopards finished fifth. Only the top four regional teams advance on to state.

“I was like, ‘Ugh, I’m going to have to tell these girls that they missed it by one spot,’” Lorena cross country coach Matt Jackson said. “And they were pretty heartbroken about it.”

As fall gave way to winter and eventually spring, the sadness faded. In its place, the Lady Leopards stockpiled a new feeling.

Still, nothing really went as planned. When the team commenced preseason workouts in August, the runners’ fitness level wasn’t where it needed to be, Jackson said.

Then one of his top runners broke her foot in a cheerleading accident. That pushed everyone else up a notch in the rotation. Suddenly, one of the team’s freshmen, Madi Tigelaar, was slotted as Lorena’s No. 5 runner, a position that Jackson calls “probably the most important on the team,” given its standing as the final scoring spot. And in August, Tigelaar was nowhere near ready for it.

Jackson sensed that Madi had come out for cross country mainly because her older sister, Chloe, was on the team.

“She was not expecting to be a major part of the team. Well, now she goes from No. 6 to No. 5,” Jackson said. “What makes this whole journey a great story, when we were training in August, we were probably picking up Madi two or three times a run. When we’d go out to practice, she couldn’t keep up. We’d have to pick her up, drive her up back to the curb.

“Most kids quit when that happens. After two or three weeks, they usually weed themselves out. Madi stuck with it, and she’s gotten better, much better.”

Still, potholes and pitfalls – usually in the form of painful injuries – loomed around every corner. Chloe Tigelaar endured a bout with shin splints. Kailey Sykora battled a stress fracture. Then, a week before the regional meet, No. 4 runner Rebekah Holle hurt her ankle in a volleyball match.

“She took the weekend off and kind of healed, and she showed up on Monday and she just toughed it out,” Jackson said of Holle. “She was not healthy when we went and ran at regionals. She ended up being our No. 5 at regionals, and she was hurt.

“I saw her after one mile and I said, ‘You just have to forget it. You’ve got to go!’ And she got mad. She gritted her teeth and just attacked it. She was angry, because she was hurting, but she wanted it so bad. She toughed it out.”

Holle is reflective of the team’s overall grit and dedication. Speaking of reflective, nobody at Lorena High School can make a glow-in-the-dark vest any more fashionable than these girls. They were impossible to miss on the roads around town, as they hit the pavement at 5:45 a.m. every weekday morning to log their miles. All 375 of them. Seriously, sophomore Ally Treat kept a running tally. The runners averaged 375 miles of training from August until now, and that was just the official practices. They all racked up even more mileage on their personal odometers on their own time.

Here’s where the story gets really good. At the regional meet in Huntsville, the Lady Leopards didn’t break out their best times of the year. It wasn’t that kind of a day.

But the entire season had never been a breeze, so why should it start on that day?

“I was a little nervous that we were on the edge there,” said Kailey Sykora.

Fortunately, because of the magic of chip bands that runners wear nowadays, the wait time for results is drastically reduced. Coaches at the meet had their phones and tablets in hand, constantly swiping to refresh the screens as their runners crossed the finish line.

Once Jackson got the thumb’s up from Lorena girls coordinator Rodney Gee – the Lady Leopards had finished in a tie for third, essentially grabbing the final state qualifying spot – Jackson decided to have a little fun with the girls.

“So I pulled them all in and I said, ‘All right, girls, I’ve got some bad news … we have two more weeks of practice,’” Jackson said.

He expected an eruption. Instead he got a downpour.

“Ally Treat started crying whenever we heard, and then everybody else started crying,” said freshman Addison Sykora, Lorena’s top runner in fourth overall. “Abby (Martinez) was like, ‘We did it! We made it, girls!’ It was so overwhelming.”

What amplified the result and made it doubly special was that it wasn’t just a breakthrough for this particular Lorena team. It was a first for Lorena, period. The program had produced several individual state qualifiers over the years – including Kailey Sykora last year – but had never sent a team to state.

Lorena won’t be the favorite to win the Class 4A team title at Saturday’s UIL State Cross Country Championships in Round Rock. The Lady Leopards carry a goal of trying to reach the medal stand, and of perhaps notching some personal-best times along the way.

But this much seems certain. Even when their legs feel like jelly, their resolve will remain rigid.

“I think this team has a lot of heart,” Addison Sykora said. “We put in the most effort. My dad says we have a lot of tenacity.”

Here’s a list of all of the area runners who will compete at Saturday’s UIL State Cross Country Championships.