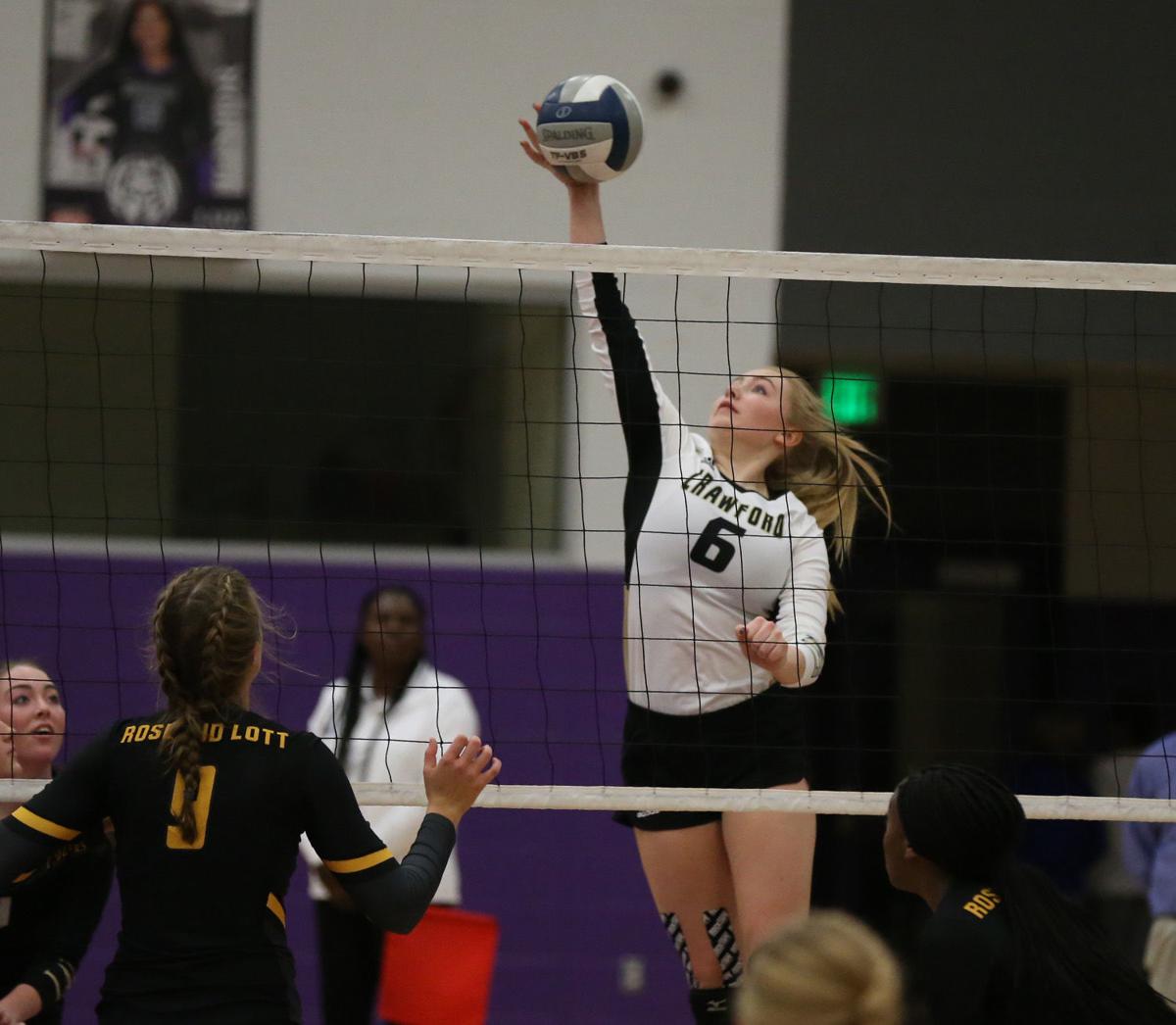 Crawford’s Katie Warden is one of several sophomores who have helped fuel the Lady Pirates’ return to the regional tournament. 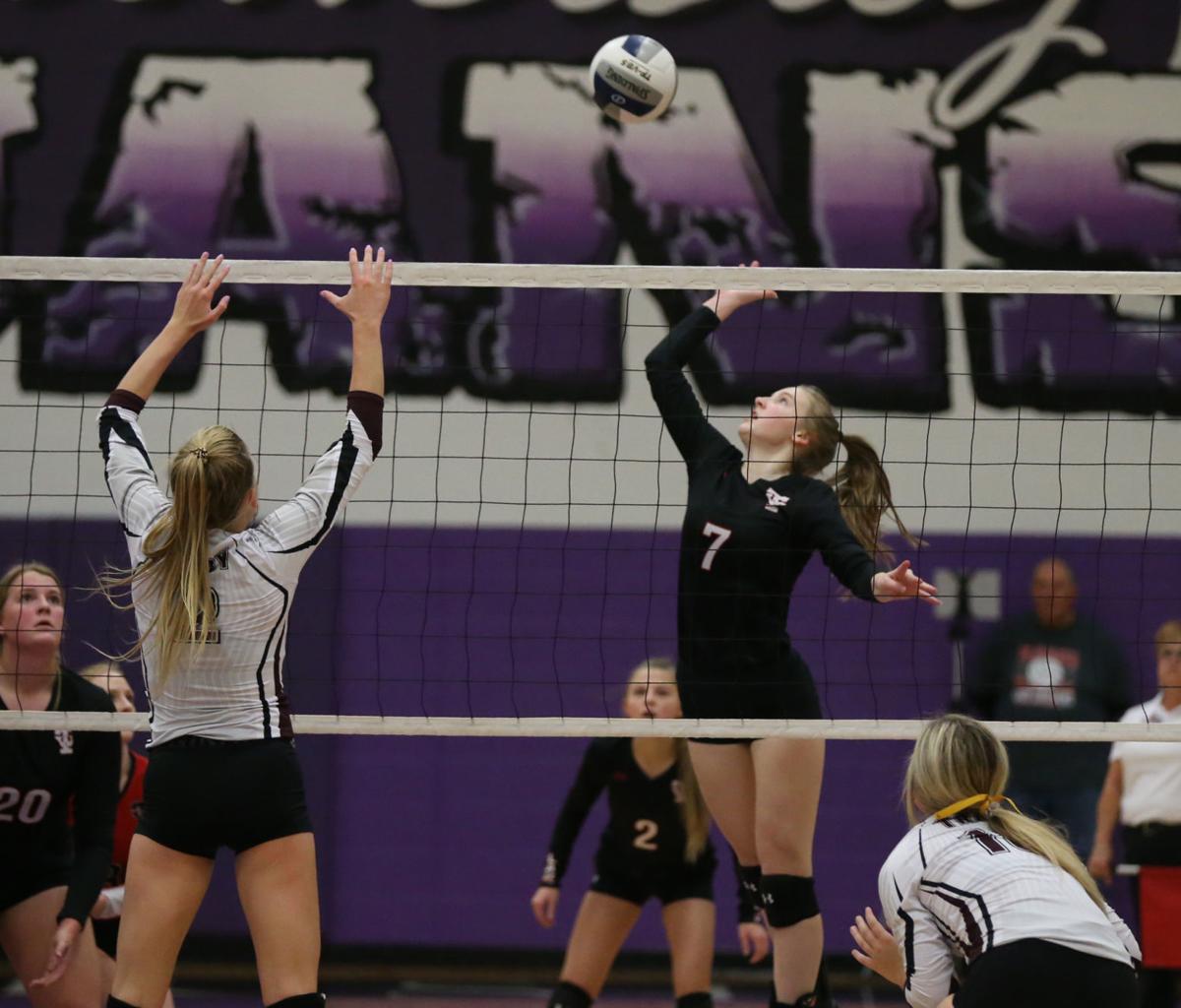 Dayla Woodard (right) and the West Lady Trojans are back in the regional tournament for the first time since 2016. 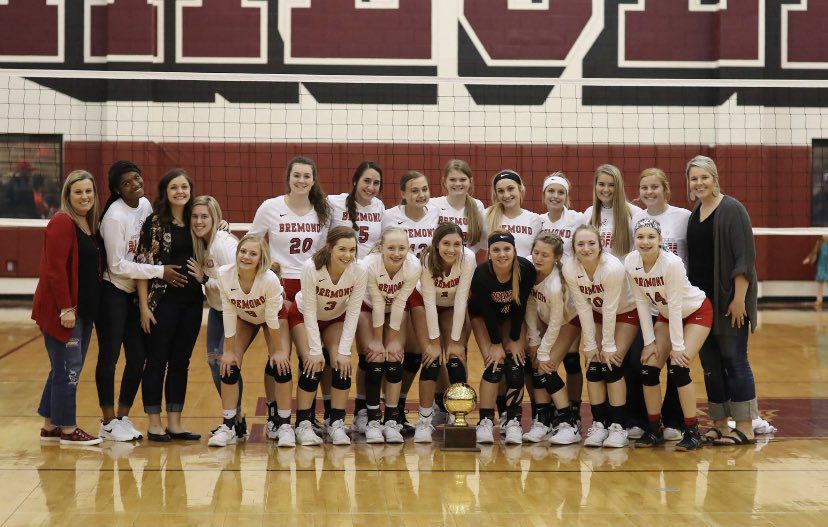 The Abbott Lady Panthers will play Bryson in Midlothian on Friday in the Class 1A Region II volleyball semifinals.

If you’re a volleyball team still alive in the Texas high school playoffs, it takes two to make a thing go right.

It takes two (more) to make it out of sight.

That’s the elite place that five Central Texas teams find themselves in entering this weekend’s action. Two wins to reach the UIL State Volleyball Tournament in Garland, and two more after that to capture the out-of-sight prize of a state championship.

“Relax, enjoy it. Embrace every minute, every moment,” said West’s Sandy Dickerson, when asked about what her message would be to her Lady Trojans heading into the Region III-3A tournament.

West (42-4) — The Lady Trojans didn’t describe it this way, but they earned a little measure of payback on Troy in the regional quarterfinals with their 3-1 win on Tuesday night. After all, it was Troy that sent West packing in the playoffs last year in a four-set match at that same stage of the playoffs.

Hallie King can finish off a point with authority for West. The Lady Trojans also stepped up their blocking as the Troy match progressed, led by juniors Kylee Jones and Halley Maler. And senior libero Claire Simmons radiates hustle as the team’s back-row leader.

West will face Nacogdoches Central Heights in the regional semis at 8 p.m. Friday in Longview. If the Lady Trojans get past that one, they’ll face either Lexington or East Bernard for the regional title on Saturday.

Crawford (45-4) — If anyone understands the challenges of this stage of the playoffs, it’s the Lady Pirates. Two years ago, Crawford swept through Lindsay and Thrall on its way to state, then finished off that magical run with two more victories for the program’s first state title. However, last year, the team’s repeat bid ended with a four-set loss to Lindsay in the regional semifinals.

Crawford’s mix of seasoned seniors and on-the-rise underclassmen has all the ingredients of another championship stew. Hitters like Anne Williams and Ana Maddox are veterans of the playoff wars, while sophomores Kylie Ray, Katie Warden and Lexi Moody have carved out significant roles in a relatively short time. Moody has delivered a whopping 1,479 assists on the year.

Crawford will face Collinsville (37-10) at 7 p.m. Friday in Weatherford in the regional semis, with the winner advancing to face the Bremond-Lindsay winner on Saturday.

Bremond (26-9) — It’s been quite the startling growth spurt for Sarah Luce’s Lady Tigers. Bremond is riding a 14-match winning streak into the regional semifinals, and hasn’t dropped a single set in that stretch. The Lady Tigers looked especially impressive in dispatching Centex rivals Riesel, Valley Mills and Wortham in this year’s playoff run.

Lyndsie McBride was one of the area’s top freshmen a year ago, and is a year better now. Junior outside hitter Alyvia Peralez also excels as a frenetic force from the pins.

Bremond received a tough draw with defending state finalist Lindsay, but at this stage of the postseason such matchups are to be expected.

So the Lady Panthers are locked and loaded for another push at state. One major weapon is their senior experience, as the team boasts seven seniors on the roster, headlined by do-it-all athlete Rachel Kallus. Additionally, junior Allison Wolf is a versatile court presence who joined Kallus in making the all-state team in 2018.

Abbott will play the Bryson Cowgirls in the Region II-1A semis at 1 p.m. Friday in Midlothian, with the winner advancing to Saturday’s regional final against either Blum or Prairie Valley.

Blum (26-11) — Lauren McPherson’s Lady Bobcats have remained a consistent power on the Class 1A level for the past four years. Two years ago, Blum made it all the way to the state final before falling to Bronte in four sets, and the Lady Bobcats are looking to get back and finish the job this time.

Blum is paced by a pair of savvy seniors in Emma Rodriguez, who’s steady as both a defender and attacker, and Kylie Sanders, another all-state spiker. Further evidence of Blum’s power can be seen in the team’s 16-0 district record, given that it was accomplished in a district that also included 2A teams like Frost, Italy and Itasca. (Classes 1A and 2A are linked together in districts in the regular season, before separating for the playoffs.)

Blum will play Prairie Valley (25-12) at 3 p.m. Friday in Midlothian, as it tries to gain a spot in Saturday’s noon Region II-1A final.