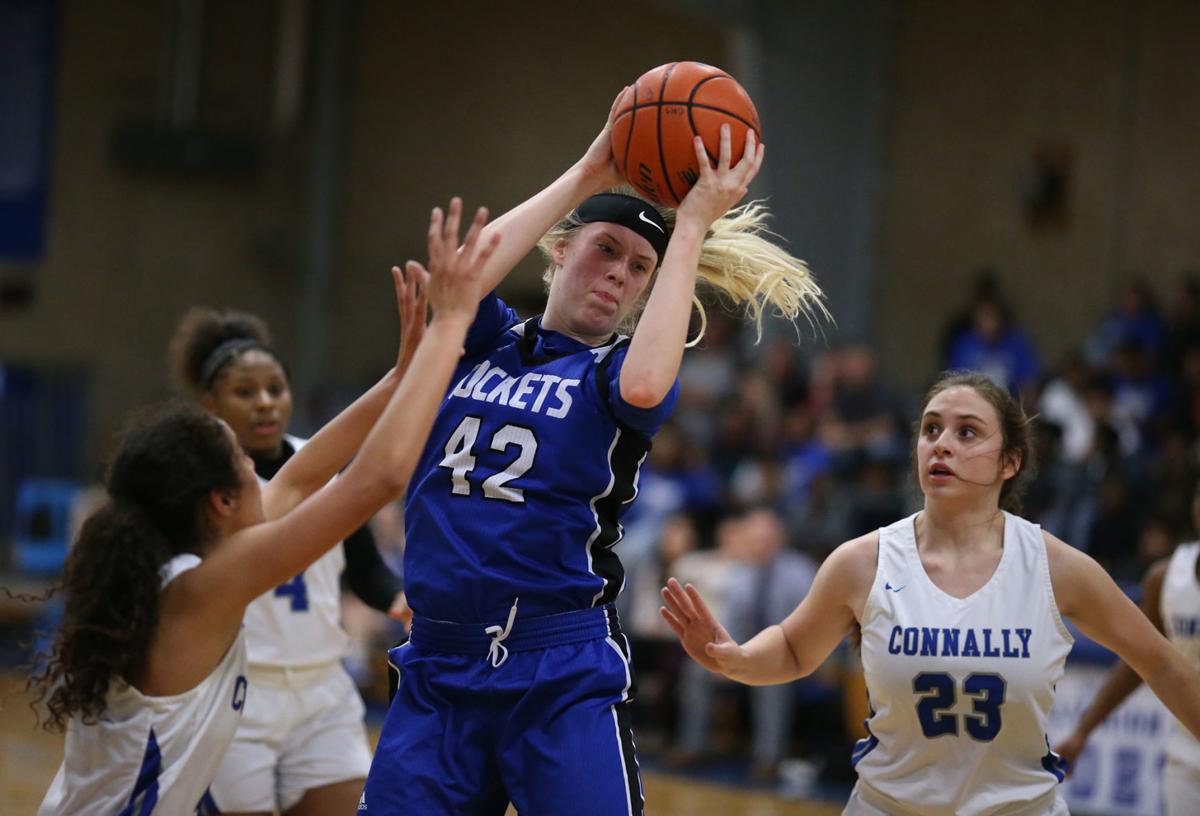 Robinson’s Madison Crowson, center, pulls down a rebound over Connally’s Tatianna Jenkins, left, and Kloie Rangel in the second half. 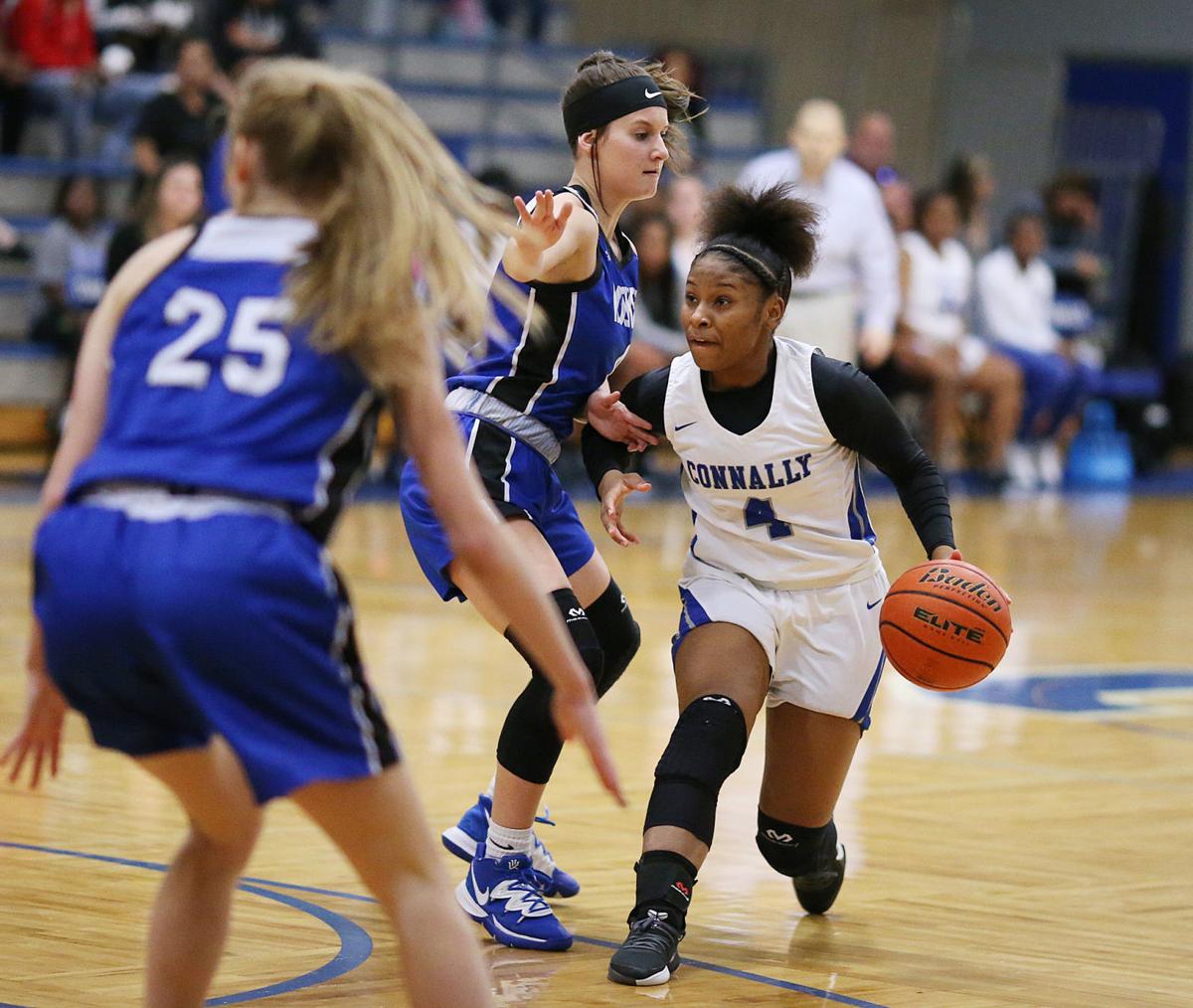 Robinson’s Madison Crowson, center, pulls down a rebound over Connally’s Tatianna Jenkins, left, and Kloie Rangel in the second half.

In the conflict between Robinson’s big and Connally’s Little, the giant won the day.

Of course, she had some sizable help.

Robinson’s senior skyscraper Madison Crowson dropped in 28 points, snatched 18 rebounds and swatted away three shots to hoist her Rockettes past Connally, 61-44, in District 18-4A girls basketball action on Tuesday night at the Connally Gym.

Even with one of the area’s best players, Miannah Little, on their side, Connally just had no answer for the 6-foot-2 Crowson in the paint. Little entered the night averaging 30.3 points per game, which is more than 53 percent of her team’s total output, and she scrapped her way to 20 hard-earned points in this one. But Crowson quite literally towered over Connally’s frontcourt players, and wore out everyone who gravitated in her direction.

“She’s starting to learn what that senior leadership is all about, and how to control what she would like to be to her team,” said Robinson coach Will McKethan, a Robinson native who’s in his first year coaching the Rockettes after coming over from Converse Judson. “They have all the faith in the world to get her the ball and put it on her until she succeeds.

“It’s my first year here, so I didn’t see Madi as a freshman, sophomore and junior, but there’s not many 4A players around like her that can control the game like she can. So I think it’s on us as coaches to put her in places to be successful and fit her, but if she wants it, she’s going to go get it.”

Robinson (7-14 overall, 2-0 district) established control with a dominant third-quarter effort. The teams were tied at 28 at the half after a lively, see-sawing initial two quarters, but the Rockettes gained separation with a crisp third, outscoring Connally, 25-12, in the period.

“I feel like we came out and executed our game plan,” McKethan said. “We controlled the tempo of the game. Even when we were running, we were running with better pace and better opportunities without forcing, working it through all of our options and getting good looks. Defensively we kept them out of the paint, much better than we did in the first half.”

They also made Connally (15-9, 0-2) scramble defensively. The Lady Cadets found themselves a step slow on many of their close-outs, leading to a Rockette parade to the foul line. Robinson shot 14 free throws in the third quarter from six different players.

“But we’re young right now. Miannah’s a senior, and the rest of them are sophomores and juniors and freshmen. At one point in the third quarter I looked out there and we had three sophomores out there with Miannah. It’s different, from having the people we’ve had in the past.”

Robinson also gave itself plenty of extra opportunities with offensive rebounds. And it wasn’t just Crowson. Junior Brooke Ashcraft was a super swooper, consistently parachuting in to pounce on the ball during the Rockettes’ third-quarter surge.

McKethan said that polishing the offensive glass wasn’t necessarily a Robinson team strength at the start of the year, but it’s starting to become one.

“We always tell them, (the fans) buy all the tickets,” he said. “If you’re on the court, you’re playing. Either you’re active or going after it, and they’re doing a lot better job of it.”

Connally trailed only 37-34 after a Little pull-up jumper, but Robinson pushed the lead to six the next trip down when Kendyl Lashombe arced in her third 3-pointer of the game. Later, the Rockettes extended the gap into double figures after an Ashcraft driving bucket and a Connally foul on Robinson’s Jenesis Nichols on a deep trey attempt. Nichols hit two of the ensuing three freebies to push the lead to 48-38.

The gassed Lady Cadets didn’t have enough in the tank to seriously threaten again.

The first half featured stretches of sharp execution from both teams. Robinson mined consistent gold with its high-low game, with Ashcraft catching the ball at the high post before feeding Crowson for easy drop-ins or fouls.

But Connally showed off its sniper-like range, and it wasn’t just Little. Sophomore Asia Smith cashed in a trio of 3-pointers in the first half, including a 28-foot buzzer beater at the halftime horn that tied the game.

Smith totaled 16 points, with 12 of those coming in the first half. For Robinson, Ashcraft picked up 12 points and Lashombe scored 11.