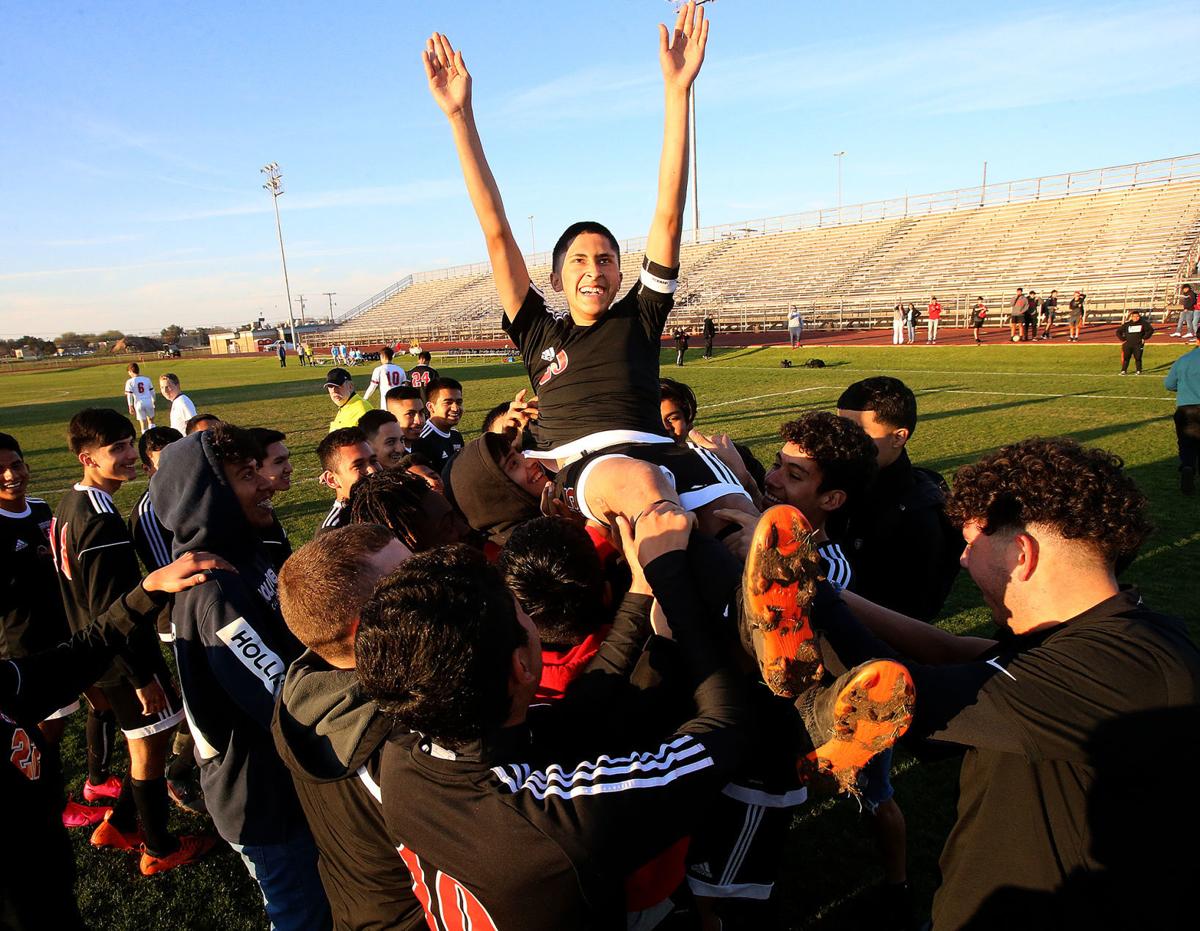 Waco High freshman Fidencio Perez gets a hero’s journey atop the shoulders of his teammates after scoring a goal in a JV game against Midway last Friday. 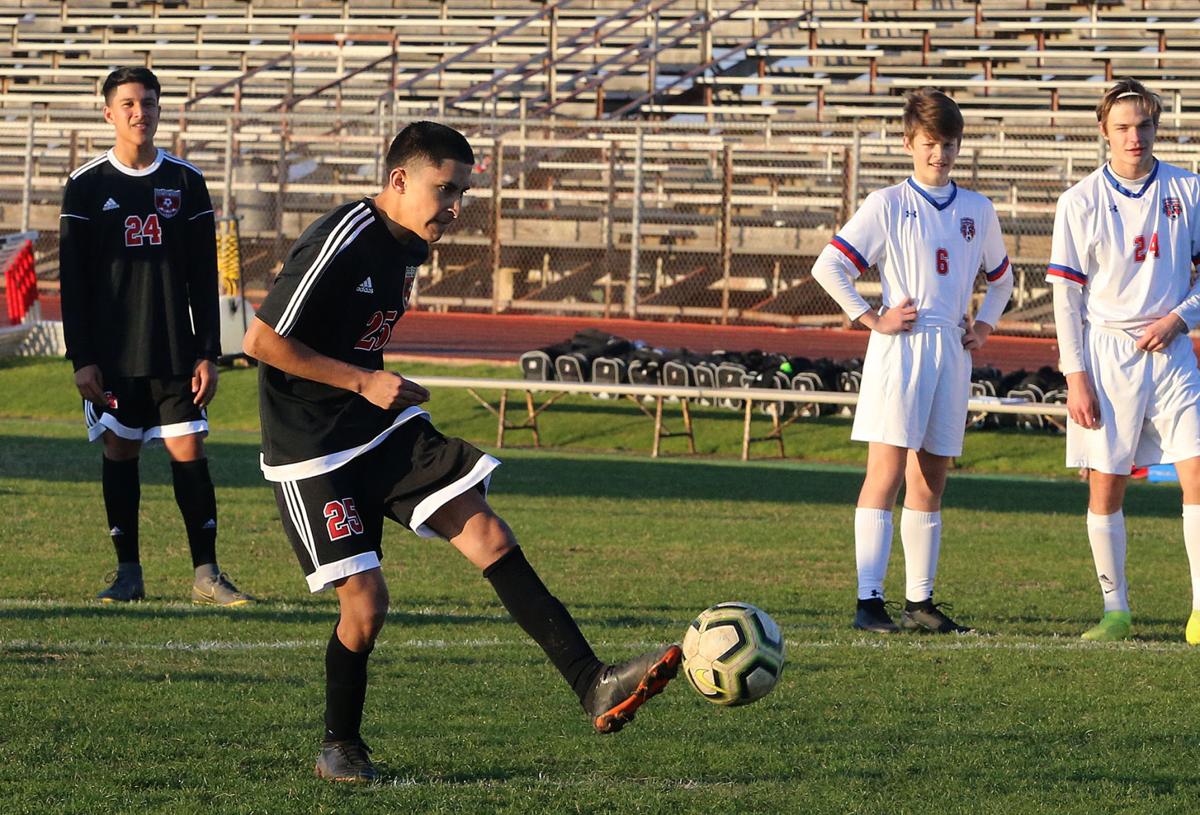 Waco High freshman Fidencio Perez boots a penalty kick in a 4-1 win for the Lions’ JV team over Midway.

Waco High freshman Fidencio Perez gets a hero’s journey atop the shoulders of his teammates after scoring a goal in a JV game against Midway last Friday.

Waco High freshman Fidencio Perez boots a penalty kick in a 4-1 win for the Lions’ JV team over Midway.

Usually when a high school soccer player finds the net, the celebration is relegated to that player and his on-field teammates.

Last Friday night at Paul Tyson Stadium, everyone cheered. And we’re talking everyone – the players who were on the field already, the ones who rushed onto the pitch to join in on the fun, the fans who stood from both teams, even the opposing players and coaches.

“It was great,” said Waco High freshman soccer coach James Yasko. “I’ve never been involved in a game where the entire team rushed the field in the first minute of the game.”

What prompted this particular glee storm? Well, it marked the first career high school goal for Fidencio Perez, a Waco High freshman who took a rather unique path to the spotlight.

Perez is a special-needs student at Waco High who has an intellectual disability. Since he’s been school-aged, soccer has always been one of his most enjoyable passions. So as he transitioned to high school, he naturally wanted to go out for the soccer team.

“The first time I met Fidencio it was first-period soccer,” Yasko said. “We thought he might be our manager, but this dude was good enough that he made the team.”

Perez played in several games over the course of the season, and his teammates repeatedly tried to feed him the ball in hopes that he might score a goal. He came close against Ellison as he knocked a header toward the net, but the goalkeeper made a sprawling save.

Not every team in Waco High’s district has a freshman team, so the opportunities were sometimes limited. But Perez loves to play, and Yasko said he makes a meaningful impact on the games even when he’s not on the field.

“He’s a great kid, always smiling. He gives me tips,” Yasko said. “He’s my favorite assistant coach. He’ll say things like, ‘Coach, we need to communicate more.’ It’s nice having that extra set of eyes on the sideline.”

Last Friday night, though, Perez kicked his impact to a higher level. Waco High hosted Midway at Paul Tyson Stadium. The Lions promoted Perez to the JV team for the night, and in the opening minute of the match the Panthers committed a handball in their penalty area, setting up a penalty kick.

Waco High sent Perez to the ball to do the honors. With everyone watching with bated breath, he thumped the ball top shelf for a score that tickled both the net and the heartstrings.

After the ball settled into the net, Perez was instantly swarmed by his new JV teammates as well as his old freshman pals, who were on hand to witness the moment. They hoisted him into the air in triumph, as a giant smile beamed across his cheeks.

“It felt good,” Fidencio said, when asked about the moment.

Midway answered with its own goal moments later, tying the score at 1. Waco High went on to win the match, 4-1, but the gesture of sportsmanship displayed by the Panthers meant as much to the Lions as the victory.

“It was really cool what Midway did to help make it happen, with Coach (Kris) Kahler and the other coaches,” Yasko said. “Everyone was really excited, and even the Midway players were giving Fidencio fist bumps.”

Waco High’s freshman season is nearing its conclusion. Yasko said that he still wants to give Perez additional chances to show off his leg. “Hopefully we can get him a couple more (goals) before the year is through,” the coach said.

But Fidencio could roll out a hat trick, and it would still be hard to top that breakthrough first goal.

“I think everyone was choked up,” Yasko said. “It was a really special moment – my favorite goal of the season.”

Step one, win the next game on the schedule. That brings you to the doorstep.

Step two, win the game after that. Then you’ll have earned a ticket to the Alamo City and the grandest stage in Texas high school hoops.

Fairfield (31-4) and Crawford (28-5) have put themselves in position to dream a little longer by qualifying for their respective regional tournaments. Two more wins, and they’ll make it to state, which is slated for March 5-7 at the Alamodome in San Antonio.

Fairfield wrapped up a second straight regional tournament appearance on Tuesday when it bopped China Spring, 61-31, in the Region III-4A quarterfinals. And for the second straight year, Lady Eagles post Braden Bossier pinch-hit as the singer for the National Anthem before the team’s third-round game. Hey, if it’s not broke, don’t fix it, right?

Last year the Lady Eagles won 28 games before being stopped by Hardin-Jefferson in the regional final. They’re anxious to clear that hump, and they’ll get their chance on Friday when they face Houston Yates (24-5) at 6:15 p.m. at Sam Houston State’s Johnson Coliseum. The winner of that one will move on to Saturday’s 1 p.m. regional final against the winner of Rusk and (guess who?) Hardin-Jefferson.

In the meantime, Crawford will pursue its own state voyage when it travels to the Region III-2A tournament at Bryan High School on Friday. The Lady Pirates have knocked off Mart, Centerville and Lovelady to get to this point, while limiting those teams to an average of 27.7 points.

Crawford is no stranger to deep playoff runs in any sport, and several of the Lady Pirates’ top players won state championship rings last November as members of the team’s volleyball team.

They’ll take on ninth-ranked Woden (30-1) in the regional semis at 8 p.m. Friday. Should the Lady Pirates defeat Woden, they’ll move on to face either Grapeland or Timpson at 1 p.m. Saturday.

Mexia ISD has approved the hiring of Triston Abron as its new athletic director and head football coach.

Abron knows something about what it takes to lead a successful football program. He comes to Mexia from Omaha Paul Pewitt, where he led the Panthers to the Class 3A Div. II state championship game last season. Paul Pewitt went 14-2 with losses only to Daingerfield in district play and Gunter in the state final. He won Coach of the Year honors from Dave Campbell’s Texas Football.

The Mexia job opened in January when Frank Sandoval departed for West Mesquite after a three-year tenure. The Blackcats were 7-4 in 2019.

Super Centex nominations are rolling in, and area basketball coaches may still submit nominations for either the girls’ or boys’ honor squads.

Nominations should include a player’s position, height, classification, statistics and any awards or honors they have achieved. They may be sent to Brice Cherry at bcherry@wacotrib.com. Coaches may also submit their all-district teams for future publication.

Check out a video of Fidencio Perez's goal for the Waco High JV soccer squad at WacoTrib.com.