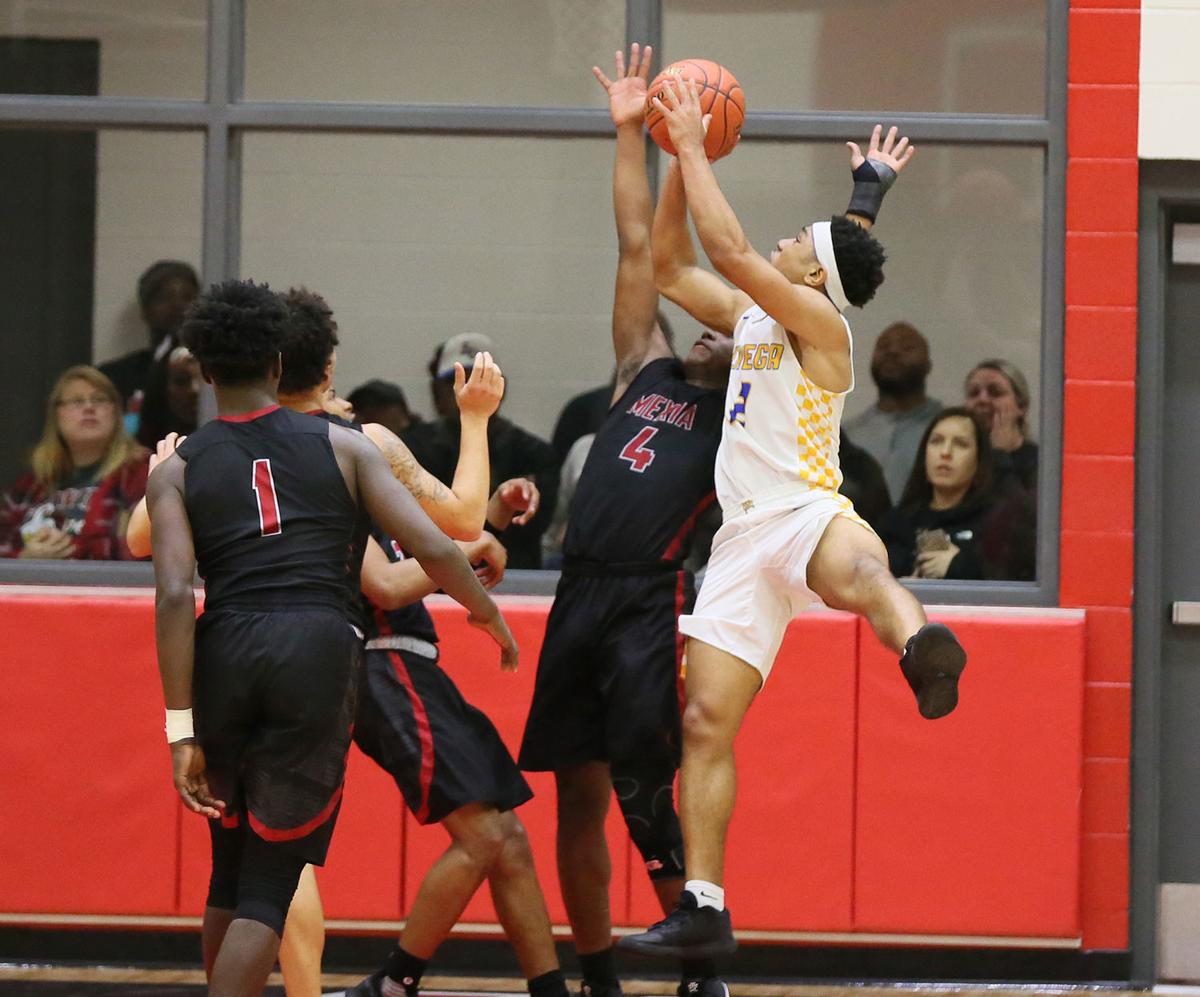 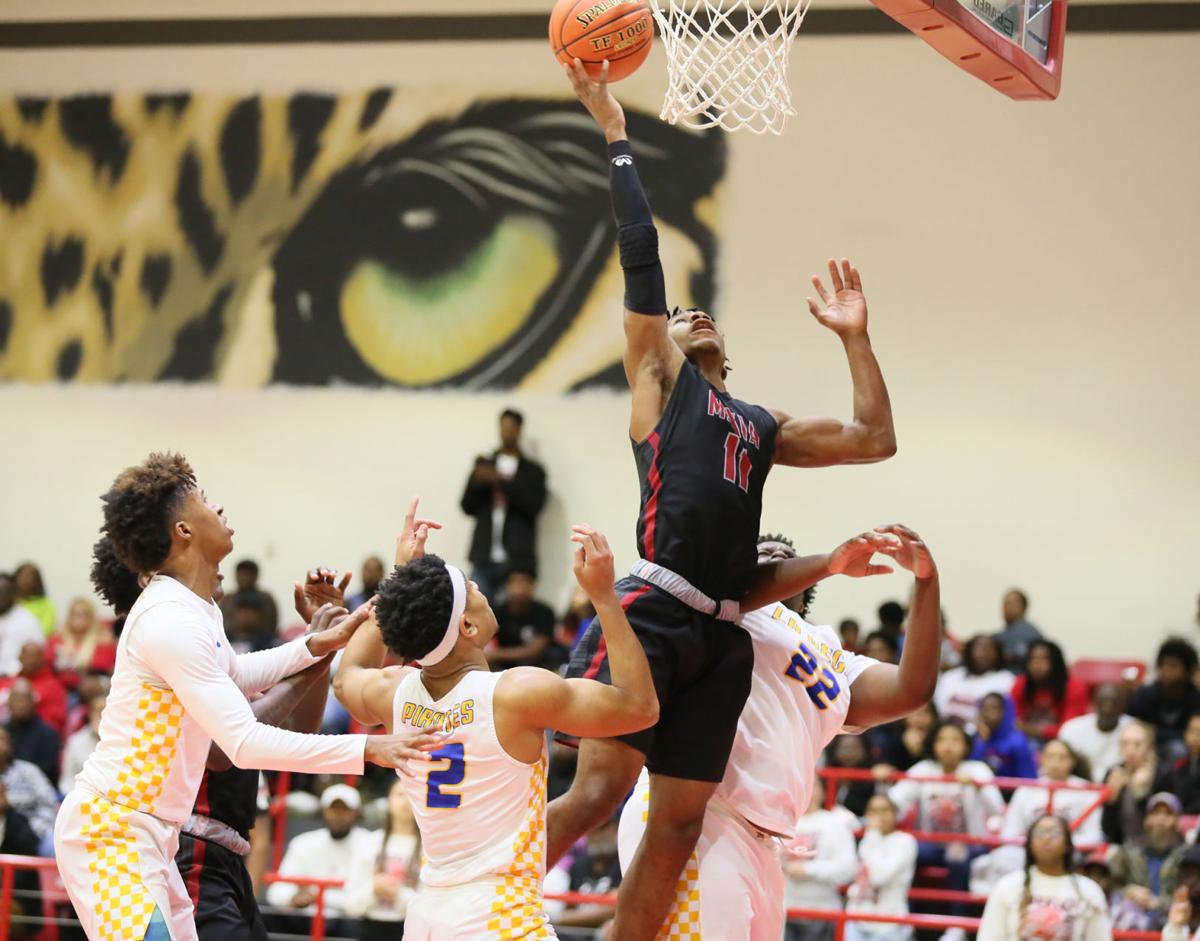 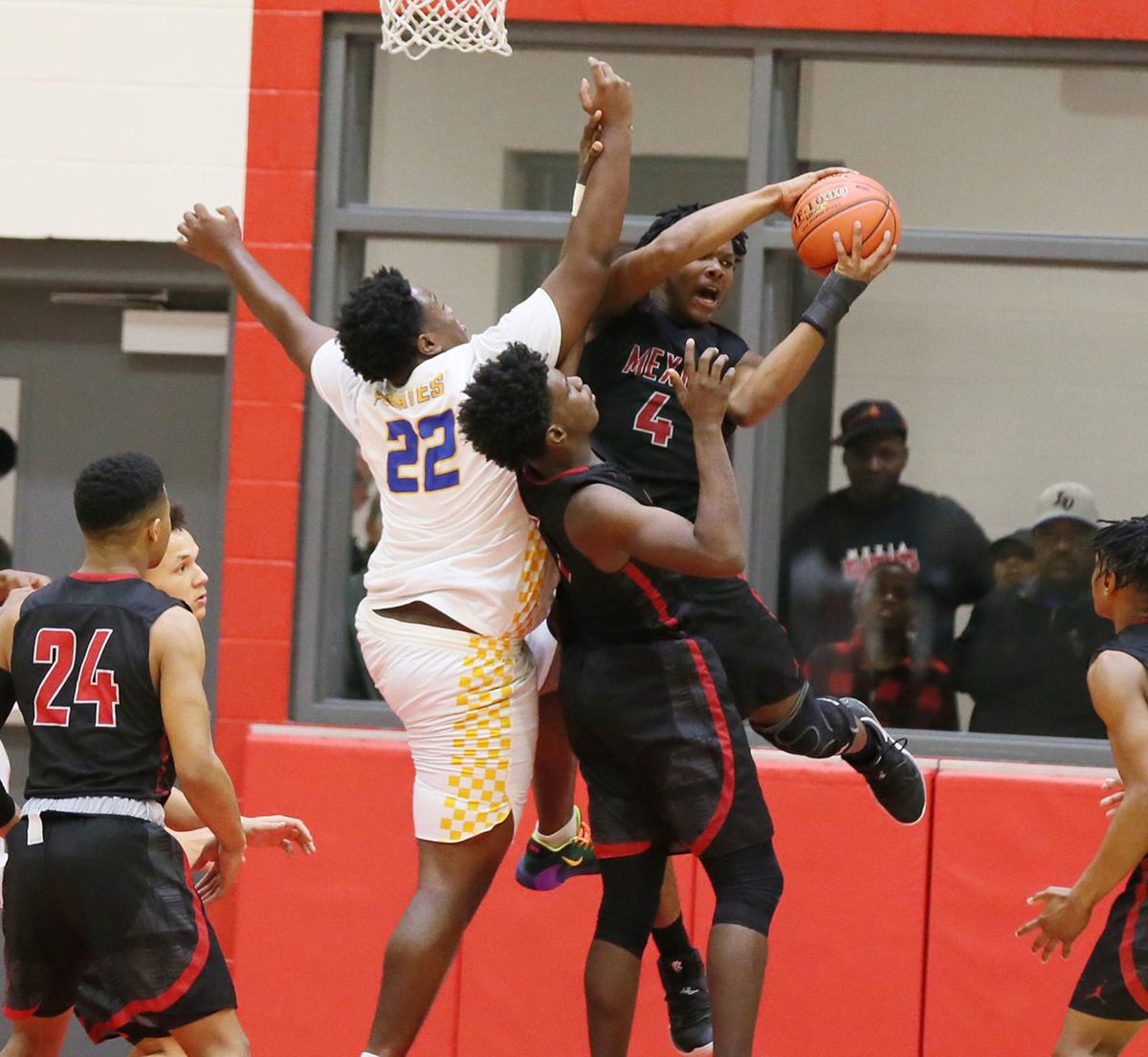 Mexia forward Lemarion Miller, right, pulls in a rebound over La Vega's Robert Allen, left, in the first half. 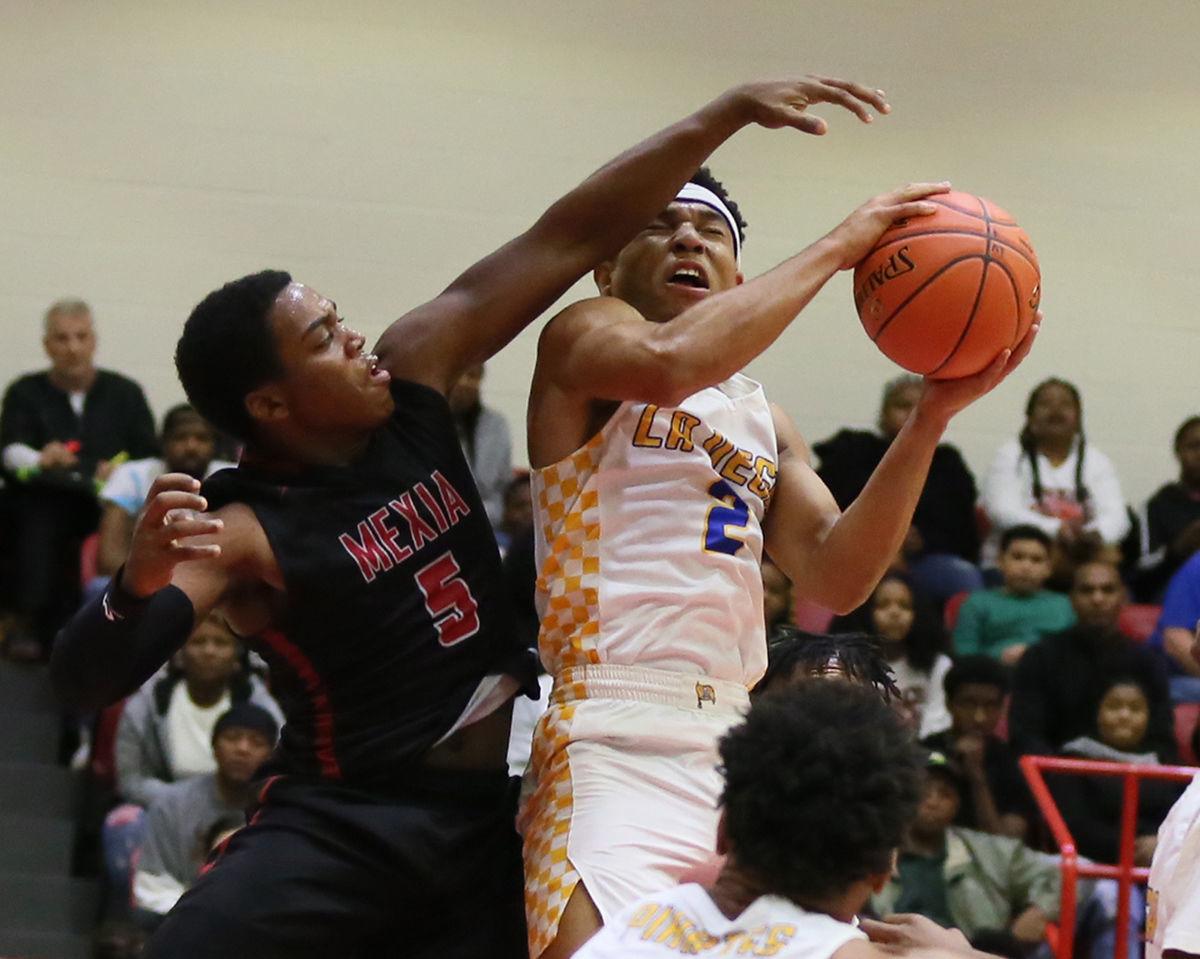 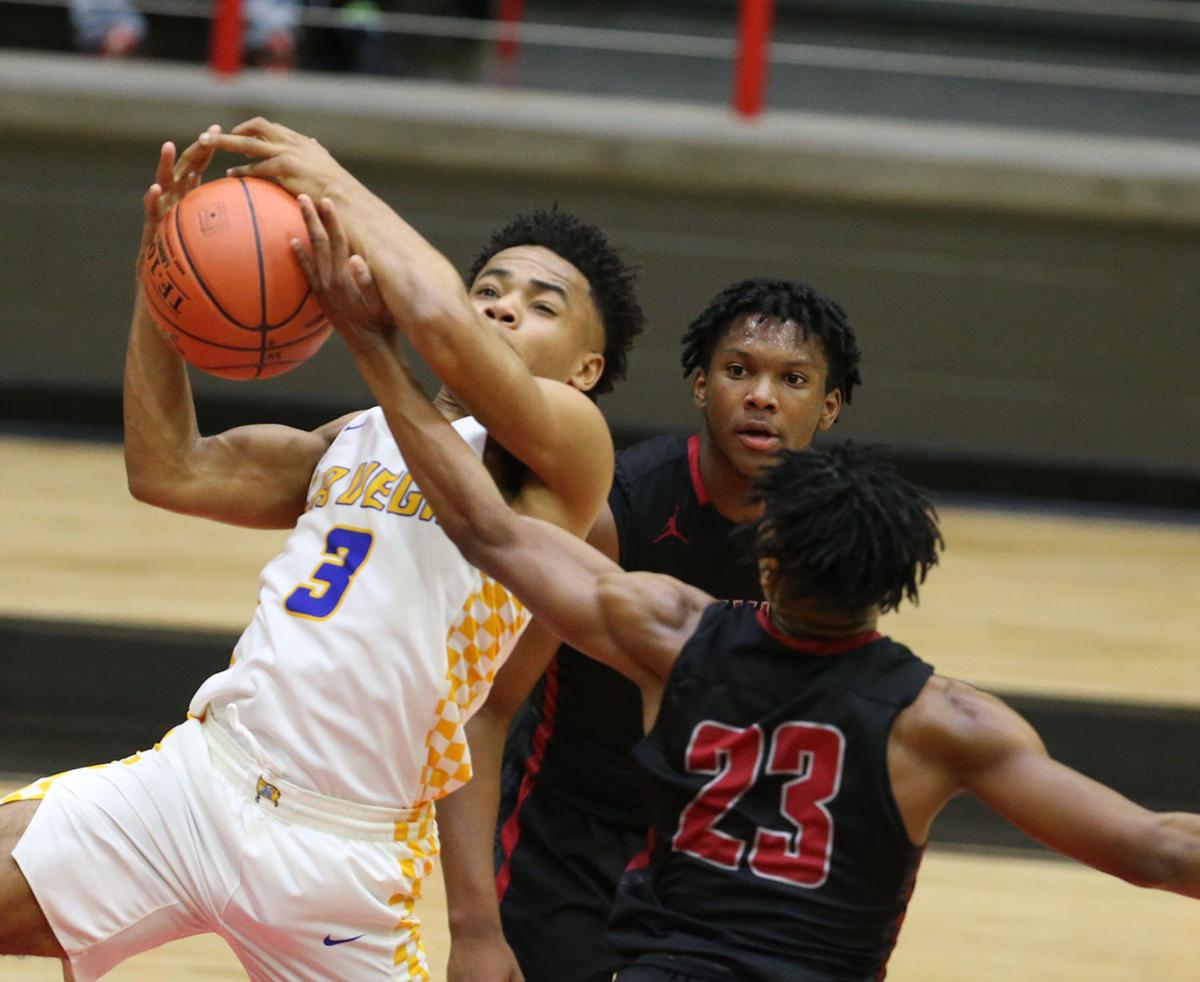 La Vega Jesse Majors-Sterling, left, pulls in a rebound over Mexia's defense in the second half.

Mexia forward Lemarion Miller, right, pulls in a rebound over La Vega's Robert Allen, left, in the first half.

La Vega Jesse Majors-Sterling, left, pulls in a rebound over Mexia's defense in the second half.

LORENA – Jordan Rogers is far from the biggest guy on the court. But he outsized everyone with his heart and guts on Friday night.

Rogers, La Vega’s 5-foot-9 junior guard, banked in a leaner with seven seconds left in overtime to send the Pirates over Mexia, 59-57, in a heart-pumping Class 4A area-round thriller at Lorena’s Leopard Gym. Mexia’s LeMarion Miller let fly a 3-point try at the buzzer that could have won it for the gritty Blackcats, but it fell short, and the Pirates survived.

La Vega (13-5) moves on to face its District 18-4A rival China Spring in the Region III-4A quarterfinals next week. The winner will move on to the regional tournament in Huntsville.

Rogers scored a game-high 21 points, but the slippery penetrator also left a few sitting on the cup in fourth quarter and in overtime. Nevertheless, his confidence never wavered.

“He’s a competitor,” La Vega coach William Cartwright IV said. “He wants the ball in those big moments, and I gave it to him in the fourth. He was upset. He said, ‘Coach, I’m going to get it back.’ We had some guys who fouled out, but he said, ‘I got us, Coach, I got us.’ When I drew the play up he said, ‘I’m going to get us there.’ And he took us there. That’s what he does.”

Justin Barnett’s Mexia team (23-5) gave it everything they had in its own quest to reach the third round of the postseason. The Blackcats trailed by as many as 15 points in the second quarter before springing back into the game in the second half.

“They’re never out of it. They’re good, they’re great. I knew they could claw back,” Cartwright said. “I told my guys, ‘Don’t have a flat third quarter,’ and sure enough, we came out with a flat third quarter. We’ve got to find a way to fix that. But Mexia gets up in you and makes it tough on you, so we knew that was going to be a struggle.”

Mexia actually closed the first half on a 6-0 run to pull to within 27-18 by a well-deserved halftime breather. Then the Blackcats carried that momentum over into the second half. Prince Banks nailed a 3-pointer right out of the gate, sparking a 15-3 run that eventually saw them take a 33-30 lead on a short jumper in the paint by Miller.

The teams swapped the momentum back and forth thereafter, befitting the close matchup that everyone in the packed gym expected coming into the night. The teams actually played once earlier this season in nondistrict play in early January, with Mexia pulling out a 71-64 win in Bellmead.

Of course, La Vega was just finding its basketball legs at that point after a deep run to the state title game in football. Here on the cusp of March, the Pirates are much further along.

“More games in this type of atmosphere. More practices,” Cartwright said. “I try to push those guys every day. I don’t let them make an excuse. It was early in the year, and Mexia’s really good. They’re still really good. It’s tough that either one of us has to go home. But they took a lot from (that first game). I told them after that game, ‘We’ll see them again. It’ll be different.’ Our booster club president passed away, he told me, the last thing he told me, ‘Coach, you’ll see them again, and the results are going to be different.’ So we dedicate this one to him.”

La Vega almost slipped away in regulation, but Miller nailed a big game-tying 3-pointer with less than a minute left, knotting the score at 53 and sending the action to an extra period. La Vega’s Rogers and Mexia’s Trey Holdman both had shots in the final seconds of regulation that could have won it for their teams, but couldn’t knock them down.

But Rogers and the Pirates made the plays that mattered most in the final minute of OT, including some key defensive rebounds on Mexia’s frenetic drives to the hoop.

In basketball parlance, a charge is known as a player control foul. In actuality, it should probably be called a player out-of-control foul.

In the early stages of their matchup, both La Vega and Mexia struggled to find a flow. In the first half alone, the teams combined for eight offensive charges. But once the Pirates settled down, they found the beat.

Both squads made some wild forays to the basket at the outset, and it resulted in four charges being called in the first 3:06 of the game. La Vega held a slim 6-4 lead through the first six minutes.

But the Pirates’ passing improved as the action unfolded, and it resulted in better looks. La Vega closed the first quarter on a 6-0 run, highlighted by a Russell Harris 3-pointer from the corner after a pretty kickout feed from the post.

Eventually they got cranked up in the second quarter, and opened up a 27-12 lead when Rogers scored inside off a sweet feed from a teammate. But Mexia wouldn’t die, and turned it into a game in the second half.

Randy Woolf Jr. chipped in 12 points and four steals for La Vega, and was a persistent pest on defense. Jar’Quae Walton added eight points, and big man Robert Allen gave a mighty effort on the glass, finishing with eight rebounds before fouling out late.

Once it catches its breath, La Vega will turn its attention to China Spring and what should be another exciting, down-to-the-last-drop thriller.

“Yeah, we got China. That will be fun,” Cartwright said. “We’ll need to find a close venue, it’ll be something like this atmosphere. Wow, against China to go to the regional tournament, that’ll be fun. We’ve got to figure out how to get that done.”

MIDLOTHIAN – Panther seniors Godsgift Ezedinma and Anthony Scott combined for 44 of their team’s 54 points, lifting Midway to a huge Class 6A area-round win over fifth-ranked Allen.

Ezedinma scored 24 points and Scott added 20 for Midway (28-10), which will get the Wylie-Rockwall winner in the regional quarterfinals next week. Both players came up clutch from the line, combining to go 16 of 22 in the fourth quarter.

ATHENS – Eli Stephens just continues to put on an encore performance of an already rousing show.

Stephens, who scored a school-record 42 last time out, added 34 points to spur the Cougars over Carthage in the Class 4A playoffs. That sends the Cougars to a regional quarterfinal matchup with their district rival La Vega next week.

MADISONVILLE – Tate Abel scored 10 points and Jed Whitney added nine for the Pirates, who held off Slocum in the 2A area round.

Next up for Crawford will be a date with Marlin in the regional quarterfinals next week.

HUNTSVILLE – It’s back to the regional final for the Fairfield Lady Eagles.

Fairfield showed some hot shooting in running past Yates in the Region III-4A semifinals at Sam Houston’s Johnson Coliseum. That’ll send Fairfield (32-4) on to Saturday’s regional final and a chance to advance to make it to the UIL State Tournament, after falling just a win shy of that goal a year ago.

BRYAN – Crawford’s terrific season came to an end in the Region III-2A semifinals, as one-loss Woden stopped the Lady Pirates.

Crawford finishes the year with a 28-6 record.