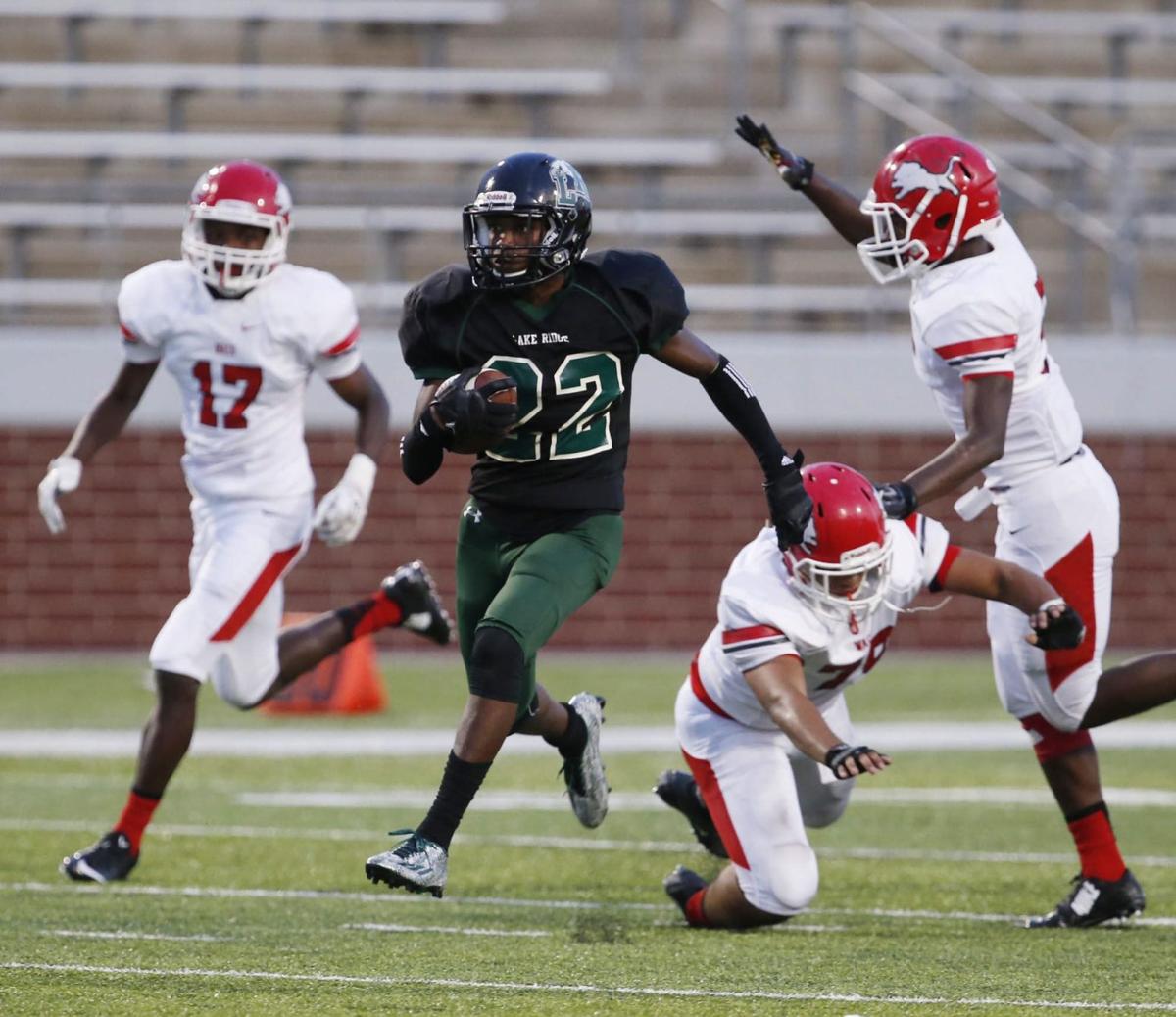 Waco High’s De’andra Jackson (5) is tackled by Lake Ridge’s Joshua Jordan (22) in the first half of the Lions’ 47-12 loss Thursday night. Jackson finished with 87 yards on 16 carries in the Lions’ first blemish of the season. 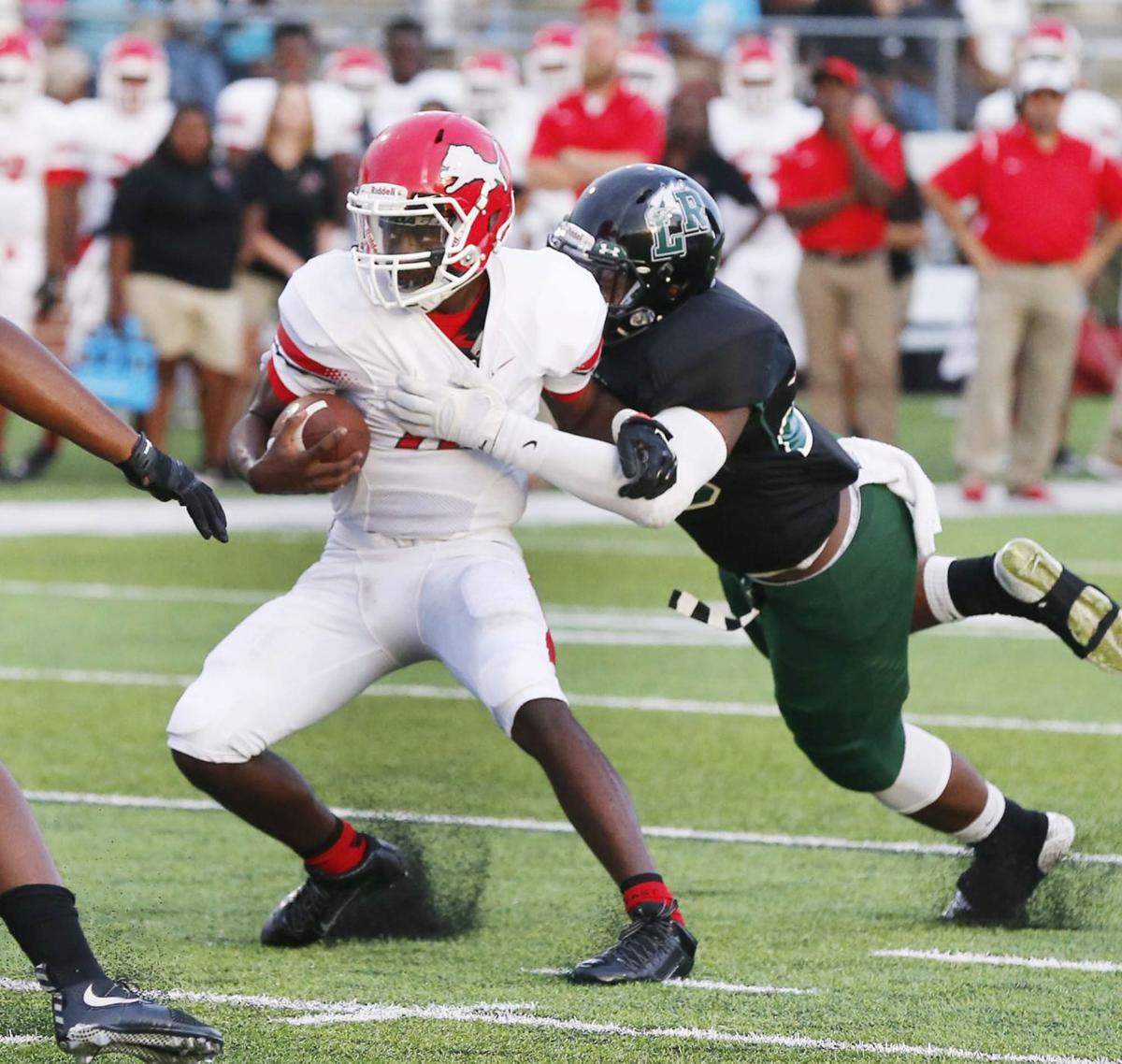 Waco High quarterback Will Richards III is pulled down by Lake Ridge’s Nathan Jackson during the first half of Thursday’s game in Mansfield. Richards left the game with a rib injury at the 4:28 mark of the first quarter and did not return.

Waco High’s De’andra Jackson (5) is tackled by Lake Ridge’s Joshua Jordan (22) in the first half of the Lions’ 47-12 loss Thursday night. Jackson finished with 87 yards on 16 carries in the Lions’ first blemish of the season.

Waco High quarterback Will Richards III is pulled down by Lake Ridge’s Nathan Jackson during the first half of Thursday’s game in Mansfield. Richards left the game with a rib injury at the 4:28 mark of the first quarter and did not return.

MORE: Waco High has hunger to restore past glory

MANSFIELD — Even with a full deck, it would have been difficult for Waco High to defeat Mansfield Lake Ridge.

But once starters started to drop, that task became nearly impossible.

The Lions lost four offensive starters to injury — including quarterback Will Richards III, who left with a rib injury with 4:28 left in the first quarter — and Lake Ridge controlled the action in a 47-12 decision Thursday night at Newsom Stadium.

“When your quarterback goes down, that takes the wind out of you,” Waco High coach Marty Herbst said. “We didn’t squeeze the ball or wrap up defensively like we had been the last couple of weeks. We’re not perfect, and we’ve got a long way to go. But we’ll show up tomorrow ready to start fixing things.”

It was a night that reminded Waco High (2-1) of last season, in which injuries were the story throughout and derailed its hopes all the way to a 2-8 record.

The Lions were already without a pair of receivers coming in, and their depth only thinned as the game went on.

“We were short-handed at wide receiver, and boom, we lose two of them right off the bat tonight,” Herbst said. “We’ve got guys lining up at wide receiver that we never thought would see the field this year, but they were called upon and had to step in there and do what they practice every day.”

While Waco High was trying to piece together an offense, Lake Ridge’s was rolling along.

Quarterback Jett Duffey threw for 169 yards and three touchdowns, and he added 107 yards and a score on 12 carries.

Nearly all of Duffey’s damage came in the first half, which he closed with the most electrifying play of the night. Duffey was looking to throw up a Hail Mary, but his protection broke down. He made a couple of Lions miss, picked up some blocks and sprinted 54 yards to the end zone to send Lake Ridge (3-0) into the locker room with a 34-3 lead.

“The end of the first half, that was just the best athlete on the field making an athletic highlight play,” Herbst said. “He’s that good. We had him surrounded in the backfield, and he slipped through the grasp. He went east and west for a long time, then we went 70 yards north.”

Duffey’s three touchdown passes all came when the Lions turned a receiver loose downfield — two of which were near carbon copies of each other to Gerard McClain.

The first one came on the Eagles’ third play from scrimmage, when McClain was wide open down the seam on the right side for a 50-yard score, and they connected again for a 44-yarder on the same play with 7:12 to go in the second to make it a 27-3 game.

Waco High answered Lake Ridge’s opening salvo with a long drive of 10 plays, but the march stalled at the Eagle 3. The Lions got points out of it on Logan Guardiola’s 20-yard field goal, but that was all the offense they mustered until the game was decided.

Everything changed for Waco High on the first play of its second possession when Richards was popped on a run. He tried to get up and appeared to try and shake it off before crumbling to the ground in pain, and his night was done.

“It took a lot of air out of us, and you wouldn’t think it would,” Herbst said. “There are 50 guys on the sideline, but he’s carried us the last couple weeks. With his experience the last two years, we were expecting big things. We’ll have to see what the doctor says.”

Lake Ridge found the end zone again late in the first quarter, when it found Tyler Robinson wide open behind the Waco High defense. The pass floated, but got to Robinson just before a Waco High defender could get there to knock it down for a 24-yard score.

Things got worse for the Lions after going three-and-out on its next drive, when Joshua Jordan fielded a punt and found a crack for a 72-yard touchdown and a 20-3 Lake Ridge lead.

Duke Williams started the second-half scoring with a 58-yard jaunt to the end zone, and McClain closed his spectacular outing with a 22-yard run straight up the middle on the first play of the fourth quarter.

Waco High added a safety when a Lake Ridge snap on a punt went out the back of the end zone, and the Lions’ third quarterback of the night, Jalen Harris, connected with LoDamion Calhoun for a 20-yard strike to end the scoring.