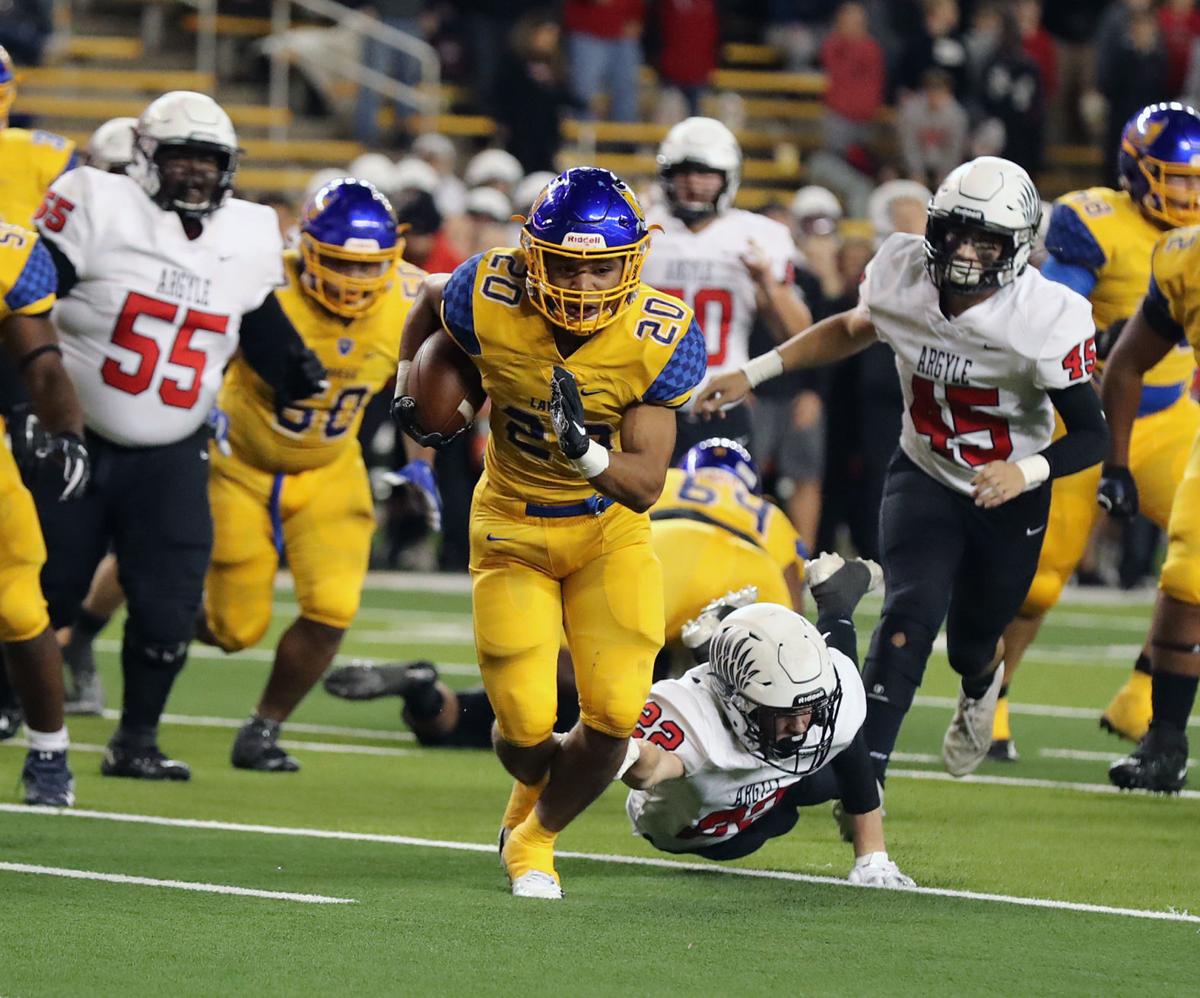 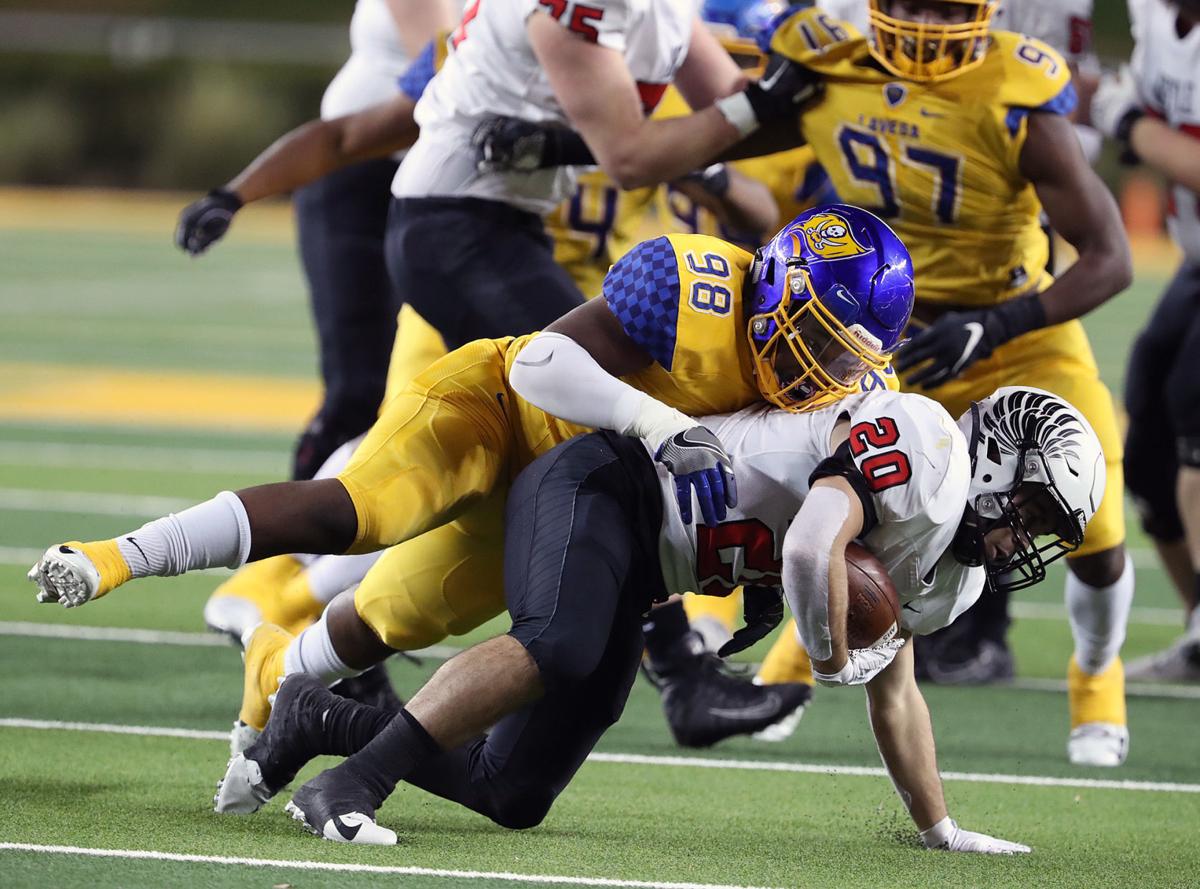 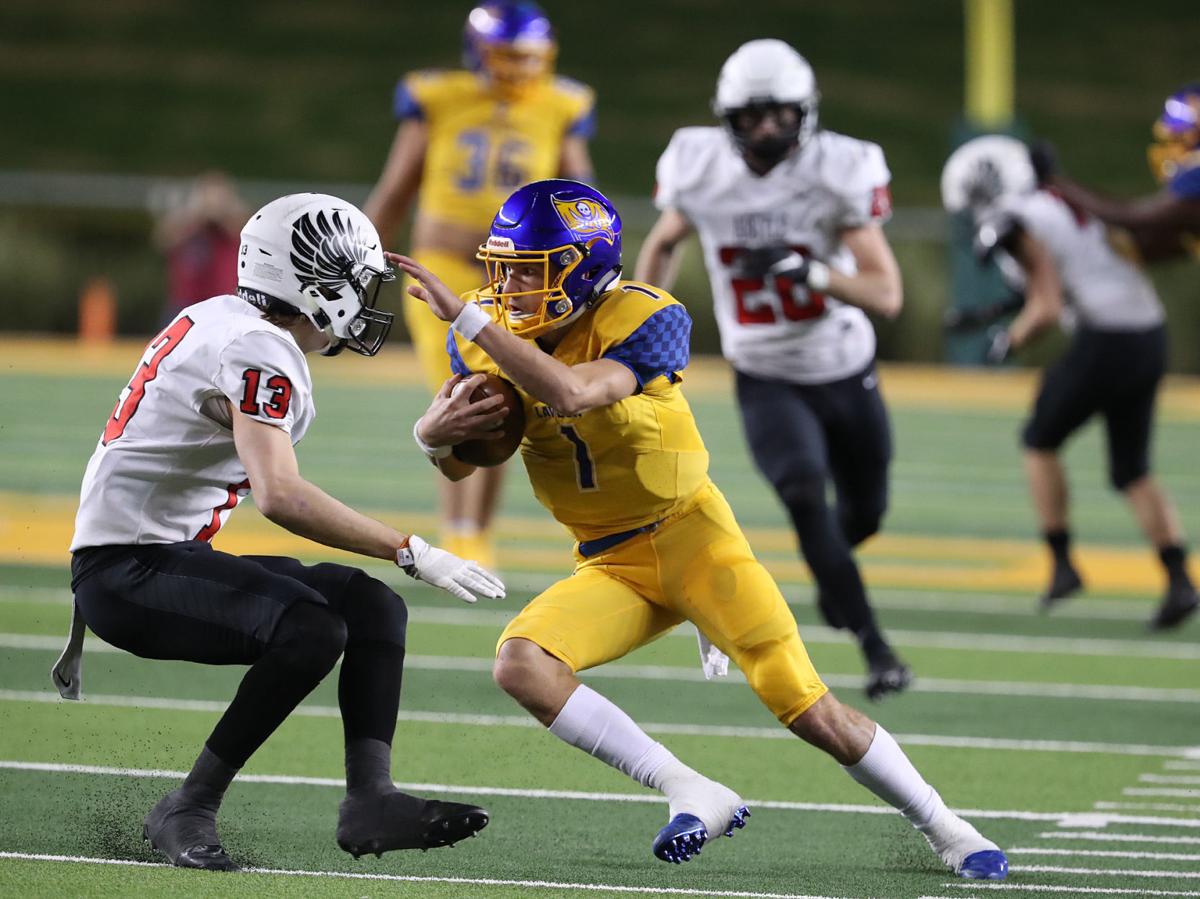 La Vega quarterback Landry Kinne (right) scores past Argyle’s Caleb Murdock after cutting back near the 20-yard line in the first half.

La Vega quarterback Landry Kinne (right) scores past Argyle’s Caleb Murdock after cutting back near the 20-yard line in the first half.

When it mattered most, the La Vega Pirates flexed.

More to the point, No. 3 La Vega dominated things, pretty much from start to finish, and defeated top-ranked Argyle, 44-20, on Friday night at McLane Stadium.

The Pirates (13-1) scored on four of their first five possessions in the first half to build a big lead. Meanwhile, the La Vega defense, which surrendered 49 points to the Eagles in their early-September meeting, took the prolific Argyle offense out of its rhythm for most of the night.

La Vega linebacker and Kansas State commit DeMarrquese Hayes said the defense around him was still forming when the Pirates lost to the Eagles in the second week of the season. But three months later, La Vega’s defense appears to be in state-championship condition.

“These boys, they come ready to work every day in practice and it shows on the field,” Hayes said. “Whether we’re down or up, we stay together.”

La Vega, the defending Class 4A Division I state champs, advance to the 4A D-I state semifinals for the fourth time in the last five seasons. The Pirates will play Springtown at a time and place to be determined.

La Vega chewed up yards with its running game throughout the contest. Pirates running backs Jar’Quae Walton and Elisha Cummings had 192 and 76 rushing yards respectively. Kinne added 88, including a 45-yard touchdown, helping boost the La Vega team rushing total to 396.

Kinne also passed for 102 yards as the Pirates were able to keep the Eagles defense off balance in the first half.

La Vega’s defensive secondary kept Argyle from mounting a comeback as Jesse Majors-Sterling and Javon Iglehart each had interceptions.

La Vega dominated the first half as it established a 31-6 lead with five minutes left in the second quarter.

An Argyle mistake got the Pirates on the board when Eagles punter Cade Merka booted the ball into the back of a lineman from inside his own 20. The ball bounced high and backward through the back of the end zone for a safety.

Ahead 2-0, La Vega marched in for another score on its first possession of the game. Kinne turned a couple of quarterback draws into 25 key yards that set up the Pirates inside the Argyle 10.

Then Jordan Rogers, lining up in the wildcat QB position for La Vega, ran three straight times, converting a fourth-and-two from the Eagles’ 3, scoring on a one-yard run and adding a two-point conversion. The score gave the Pirates a 10-0 lead six minutes into the game.

Kinne also found the end zone in the first half. He took off on a quarterback draw early in the second quarter, found acres of running room in the secondary, and then made a nifty cut back for the final 20 yards of the 45-yard touchdown romp.

Hogeboom also tossed a 5-yard TD pass to Cade Merka on the final play of the first half that cut the Pirates’ lead to 31-13 at the break.

But the Eagles couldn’t stop La Vega’s running game through the first two quarters. The Pirates piled up 266 rushing yards on 29 carries in the first half.

Walton and Cummings got to the end zone in the second half. Cummings scored on an eight-yard run to cap the Pirates drive that opened the third quarter. Then Walton finished the La Vega scoring with a seven-yard touchdown in the fourth quarter.