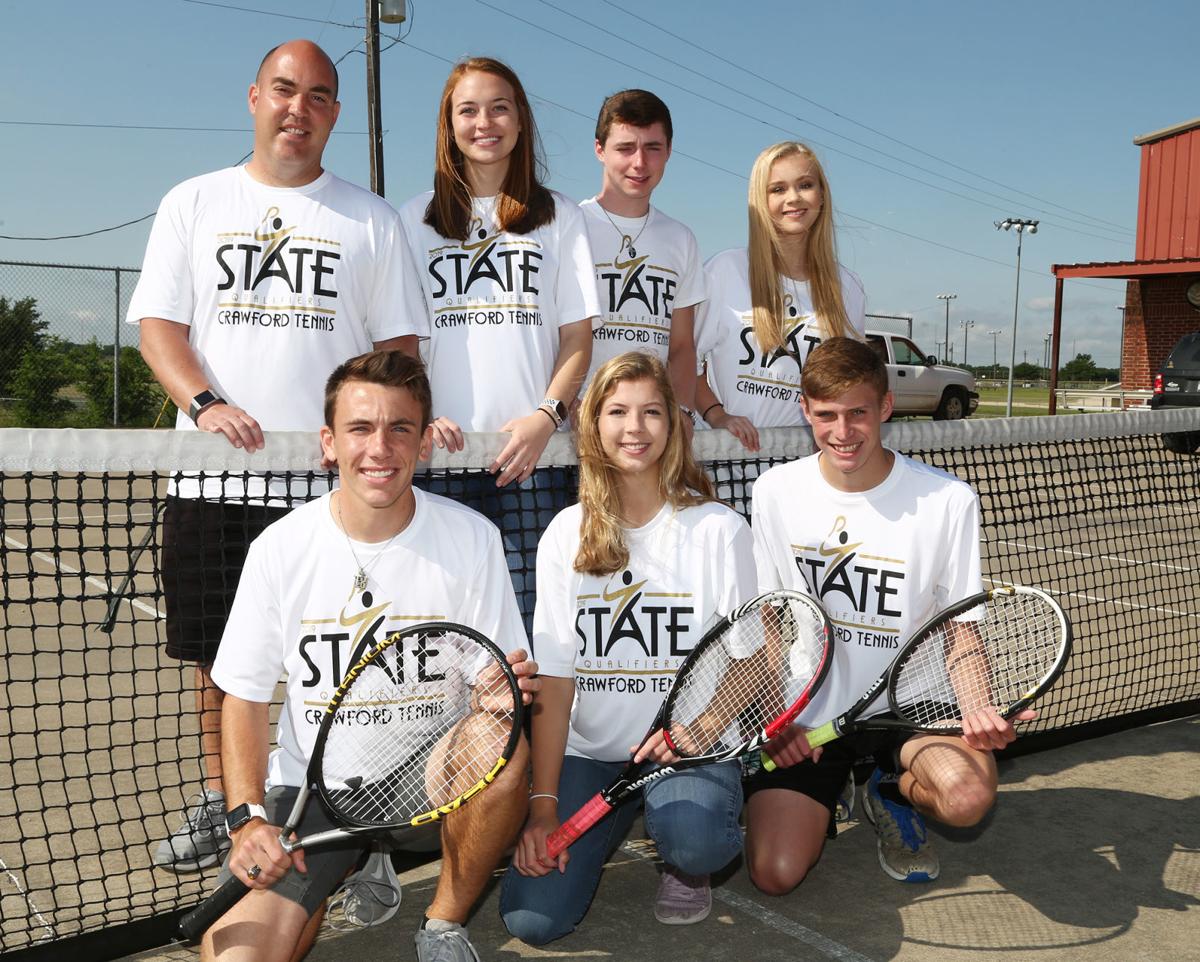 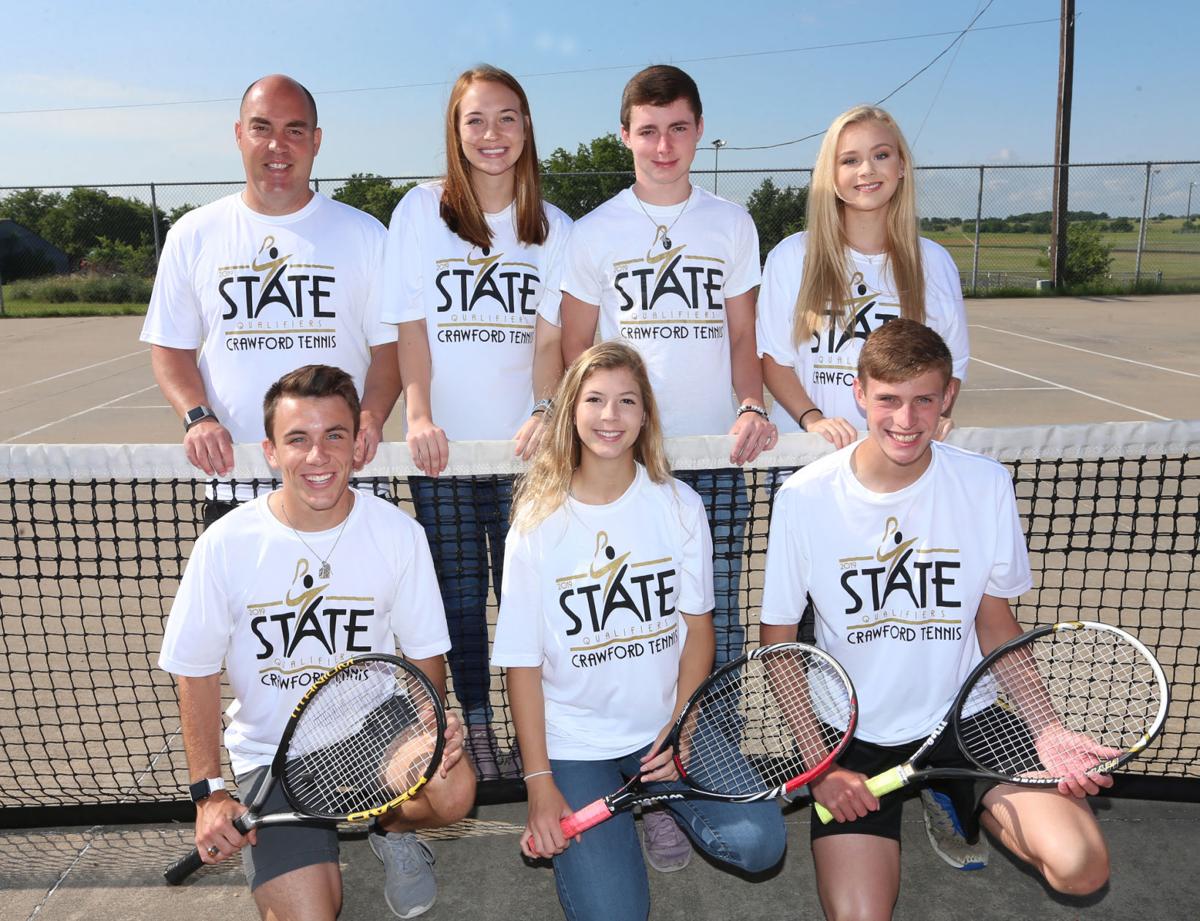 Crawford tennis coach Jeff Coker pulled three of his top athletes aside, and enthusiastically coached them up for this pressure-packed moment.

“Look, the beauty of it is it’s not on TV,” Coker said. “And he can edit out anything you say that’s stupid.”

Yes, several of Crawford’s top tennis players needed some coaxing to endure the interview process for this very story. It’s not that the athletes weren’t intelligent or eloquent. It’s not that they had nothing to say. But the idea of talking on the record about their own athletic achievements seemed a little overwhelming.

As with a lot of sports at Crawford, these athletes tend to let their games do the talking.

“It just means we have a lot of kids who are willing to go out and compete their hardest,” said junior Anne Williams, when asked about Crawford’s recent ascent as a state tennis power. “Tennis isn’t our most popular program, and we don’t play year-round, like a lot of bigger schools do. But we all just go out there and try to be athletes and do our best.”

Crawford is well-respected for its across-the-board athletic success, but particularly in sports like football, volleyball and softball, which have all won state championships in the 21st century.

But the tennis program is clearly accelerating to catch up, like a whistling first serve that skids in for an ace. Last year, Crawford sent a school-record group of eight qualifiers to the UIL State Tennis Tournament. This year, the Pirates are sending six more – the difference this year being that each will be headed to College Station as a regional champion.

Put it this way: Crawford’s group of 14 qualifiers the past two years is second in Class 2A, behind only the Mason Punchers, who are a longtime state heavyweight in high school tennis.

So, what gives? Why has Crawford made such net gains on the tennis court in the past couple of years?

“Partially, it’s me learning what’s out there. You figure out what you need to do to get better, and how to navigate certain situations,” said Coker, who has coached tennis at Crawford for the past 10 years in addition to his longer stint as head volleyball coach. “Partially, dropping down a classification, where we’re not playing Brock and people like that at regionals. We actually have a chance to compete with other schools that are closer to our size.”

But perhaps most of all, it’s more athletes just giving it a go. Tennis, anyone? Once a group sets a standard of winning, others take notice. Kind of like, “Oh, we’ve got tennis courts, too? And the team wins? Hmm, maybe I’ll give this a shot.”

“As we’ve had success, more and more athletes are coming out to play tennis that maybe wouldn’t have tried it before in the past,” Coker said. “They find out it’s pretty fun and we’re having success at it, so it’s just like anything else, success breeds success. People see that, hey, they’re going to regionals, they’re going to state, you keep setting the bar higher and higher.”

Crawford’s six-pack of state qualifiers consists of the boys doubles team of Hogan Hall and Dakota Anderson, the girls doubles duo of Williams and Blair Brunson, and the mixed doubles team of Karson Green and Taylor Westerfeld.

Lately, all these athletes have been able to do is practice. The UIL tennis season is unique in that it gives players a month off from the end of the regional tournament before the start of state.

But in Crawford, they don’t take the layoff as an excuse for a vacation.

“We put in a lot of effort,” said Hall, who is making his second straight state appearance. “I think we practice probably more than anybody does in a week. Just putting in practice continuously every day, you can definitely see a change from the first tournament to state.”

They practice a lot. They also have loads of fun. Seemingly, those things wouldn’t be chocolate and peanut butter, in the sense of a beautiful blend. But each Crawford player interviewed specifically mentioned the fun that Coker brings to the Pirates’ tennis proceedings.

The coach said that he tries to do that by design.

“I always think the more kids are having fun, the harder they’re going to work at it,” Coker said. “So I always try to keep everything as fun as possible while still getting our work in. It’s just a grind. … In tennis you practice for a whole month without ever playing anybody different. You’ve just got to try to keep it fun, give them some breaks, some days off here and there.”

It’s back to the grind on Thursday, though. State action will get cranking at 8 a.m. in College Station, and all three Crawford doubles tandems have designs on hopefully making it through the first day and advancing on to the final.

The duo of Williams and Brunson said that they’ve seldom been clicking simultaneously this season. When one is down, the other is usually up, and that’s worked for them.

What would happen if both players could put it all together on the same day? “That’d be fantastic,” Williams said with a self-deprecating laugh.

Coker said that only one Crawford team has ever reached the state tournament and come home with a medal. The Pirates have a good shot of adding to that history this season.

“You want to win that first match,” the coach said. “If you can win that first match, that means you’re going to get a medal. Once you get into the second match, if you get into the semifinals, you’re probably playing a Mason team, and they’re the tennis gods. So, all the pressure is on them. No pressure is on us. You can just play free, just go give it your all and see what happens.”