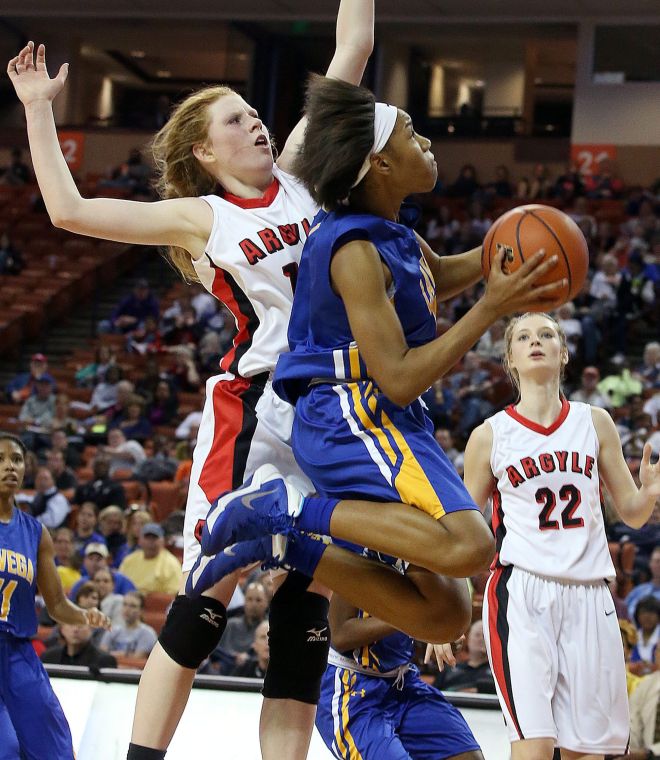 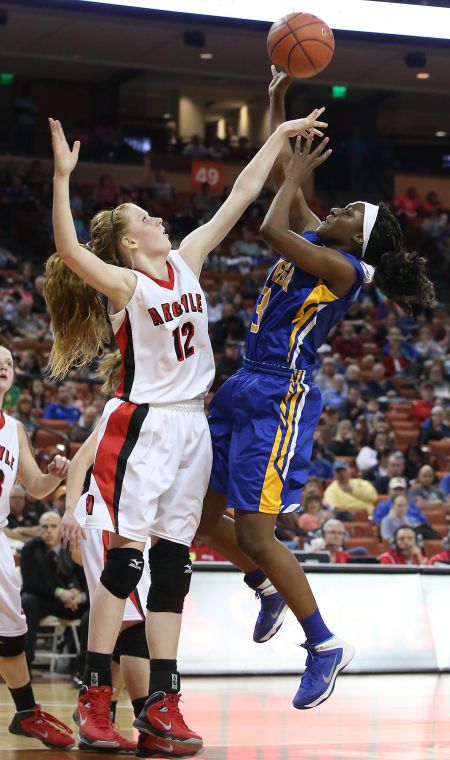 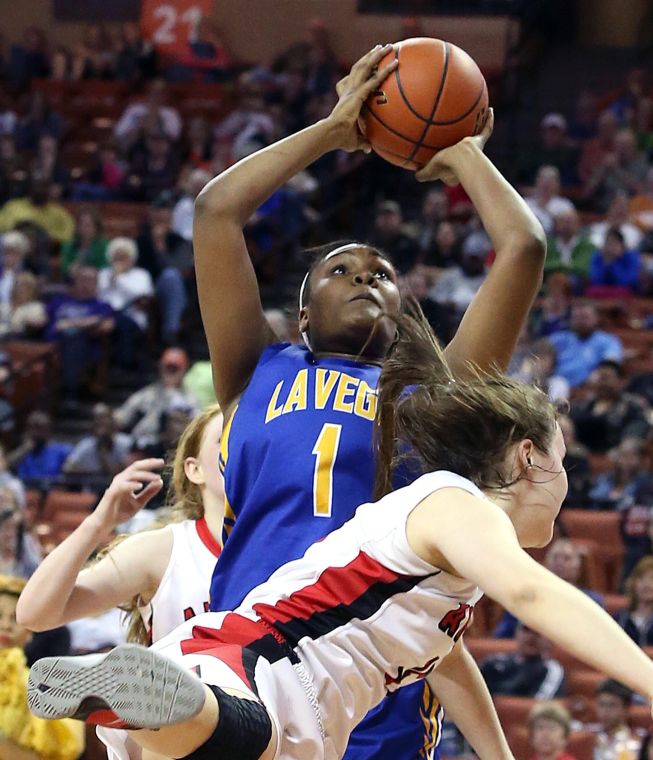 AUSTIN — After a season of collective efforts kept La Vega unbeaten, Calveion Landrum put the Lady Pirates on her back and finished off a perfect season with a Class 3A state title at the Frank Erwin Center on Saturday.

Landrum had 23 points and was named the game’s MVP as La Vega defeated Argyle, 47-42, for the school’s first girls’ basketball state title.

La Vega coach Amy Gillum also finished what she started 19 years ago as a player on the last Lady Pirate team to make the postseason trip to Austin.

“Words cannot explain how I feel,” Gillum said, “I tell (the team) all the time we fell short, my team fell short. So to be back where I graduated, nobody has more pride than me. I know the great things that people that have came out of La Vega have done. To be in this position, to achieve this with this group. It is a wow moment and I’m sure it will hit me tonight.”

The first title did not come without its share of obstacles.

Argyle came into the contest with just one loss on the season and gave the Lady Pirates everything they had.

La Vega’s lead was only two with 2:13 to play in the game. Argyle didn’t make a substitution until freshman guard Vivian Gray fouled out in the final minute.

“We didn’t play as good a game as we could have,” Argyle coach Skip Townsend said. “But we fought hard and battled until the end. I couldn’t have asked them to fight any better. We have a lot coming back next year. Let’s see if we can get back down here next year.”

Neither team will lose a starter to graduation. Argyle had only one senior on the roster while La Vega had just three.

The No. 2-ranked Lady Eagles looked poised to upset the No. 1 Lady Pirates as they took command early, leading at halftime and into the early third quarter, but La Vega pulled ahead and proved to be too much in the fourth quarter, winning their first decision by single digits since Dec. 5.

Gillum said this victory was a year in the making.

“After the loss last year to Mexia, that hurt,” she said. “Not just me, but it hurt them. I kept it on their mind. They worked hard every day at practice. I know they thought we were crazy. I could see the looks on their faces, but we told them it would pay off and they believed. They believed in the system, they bought in and they took care of business.”

Landrum was most important in the first half as the rest of her teammates struggled from the field.

The sophomore guard scored 15 of the team’s 24 first-half points to keep the Lady Pirates in the game. After missing her first two shots and being held scoreless from the field in the first quarter, Landrum came alive in the second. She was 5-of-7 from the field and made all three of her 3-point attempts. The rest of her team was 4-for-19 from the floor in the half.

Argyle closed the first quarter on a 10-2 run for a 12-6 lead, but Landrum scored La Vega’s first eight points of the second to bring the Lady Pirates within two. She followed with an assist to post Erin Degrate for a layup and then hit a short jumper to put La Vega back on top, 18-16.

“She’s gifted,” Gillum explained about the unselfish and quiet star. “Her first thought is to get her team involved and we have to tell her, ‘Shoot the ball.’ We wanted to get her open on the three early so that the defense could spread. It didn’t quite work out how we wanted it to, but then she got hot and we just told her, ‘Go, go, go.’”

The teams exchanged baskets with Argyle getting the last of the half, a 3 by Olivia Gray with 32 seconds remaining to hold a 25-24 lead at the break.

La Vega made defensive adjustments in the second half that paid off. Despite four blocked shots in the first half by Erin DeGrate, Argyle had been successful at drawing the Lady Pirate post out of the paint to the free-throw line and then cutting behind her for layups or post-up opportunities on smaller defenders. The junior began to sag down and cut off those inside plays, which forced Argyle to stay outside. The switch worked, as Argyle managed only four points in the third quarter and La Vega led at the end of a quarter for the first time in the game, 32-29.

Argyle began the fourth quarter with more pressure and attempted to double team La Vega’s super sophomore. Its switch was not as effective as Landrum’s teammates began to make plays consistently.

“I’m used to the double teams,” Landrum said. “Teams have done that all year. It doesn’t bother me. When they do I just depend on my teammates to make plays and to have my back.”

They had her back in the fourth quarter.

DeGrate, who had struggled from the field early, was the recipient of two assists from Landrum in the final quarter after failing to convert on several layups and short jumpers. She finished with 12 points and 12 rebounds. DeGrate had double-doubles in both state tournament games.

La Vega becomes one of the few teams to finish with an unbeaten state title, and Gillum believes it came down to working hard and playing together.

“They realized the hard work pays off,” the coach said. “We would say all year, ‘Earned not given.’ Nobody was going to lay down and give us anything, we had to earn it and we earned this.”

“I’m grateful to be a part of history and we couldn’t of done it with a better group. I tell people I have 13 children, 12 of these girls and my own son. Because we are a family. We are a family that can depend on each other.”