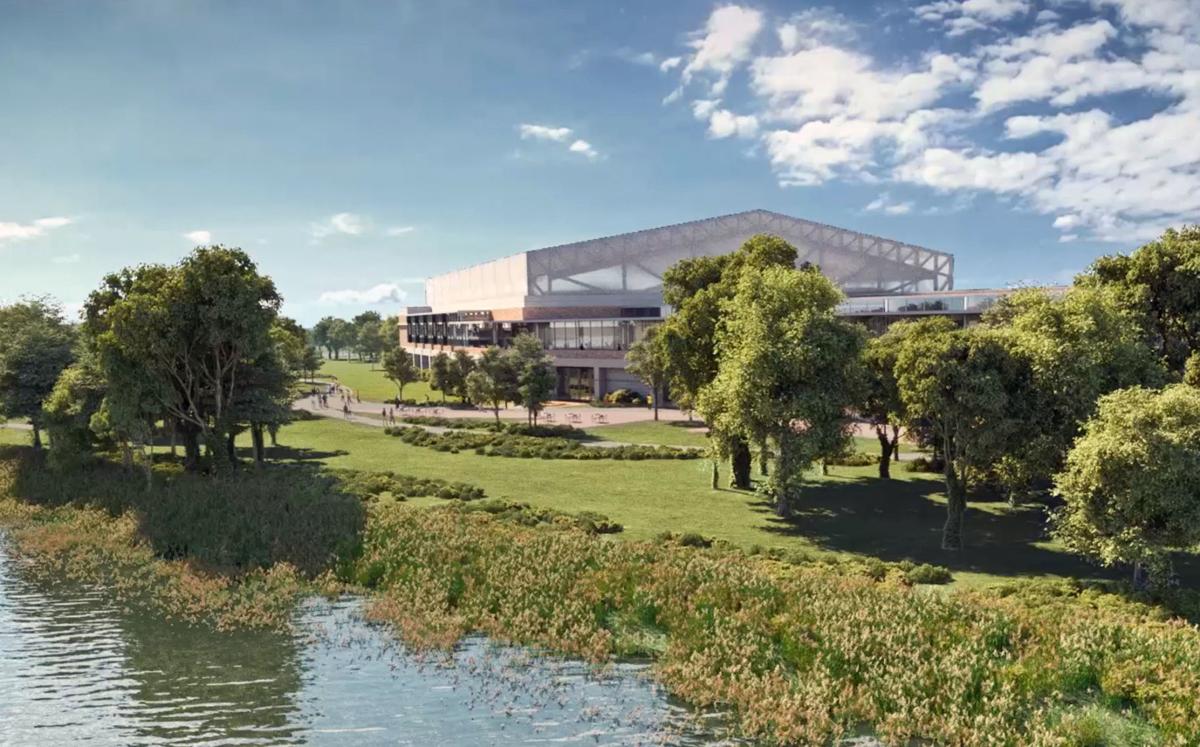 The Baylor Basketball Pavilion will sit near the Brazos River on an existing parking lot between the Ferrell Center and Baylor Ballpark. 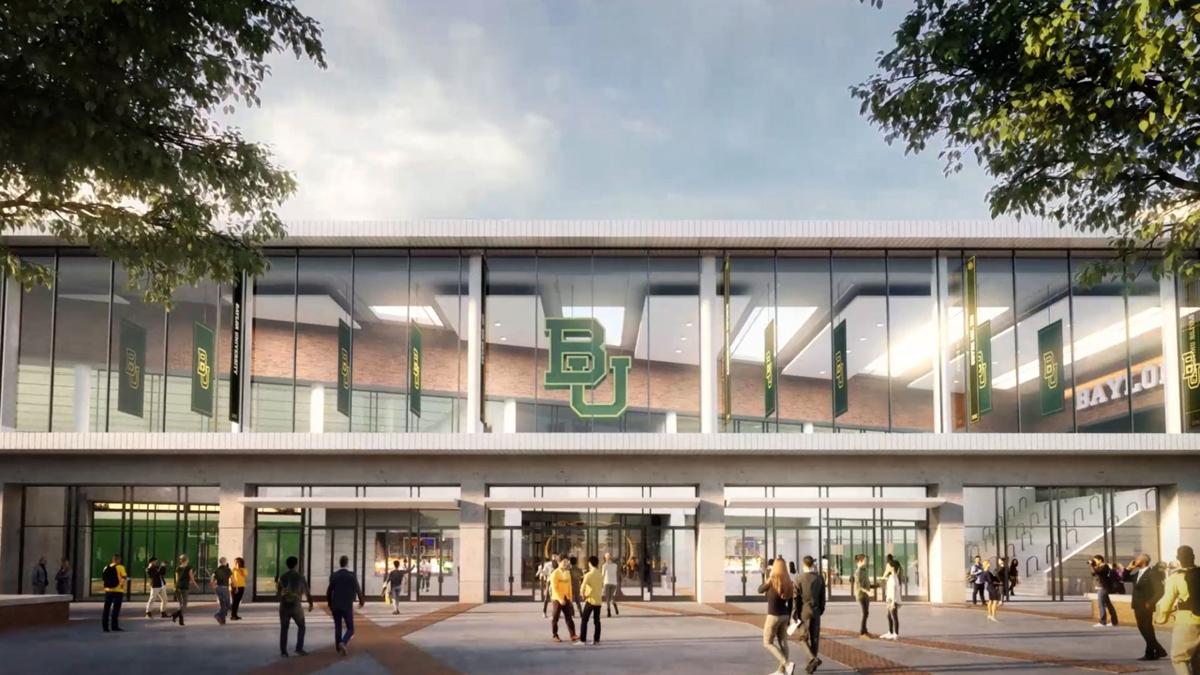 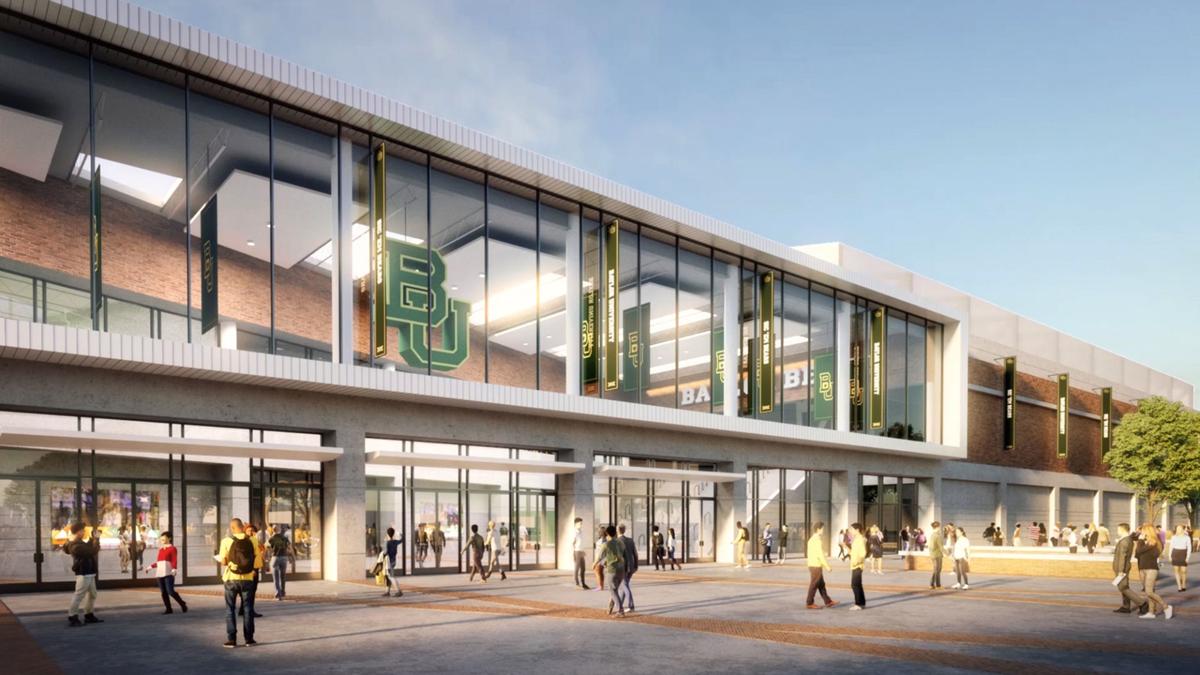 The new Baylor Basketball Pavilion is slated to reduce capacity by some 3,000 to 3,500 seats.

The Baylor Basketball Pavilion will sit near the Brazos River on an existing parking lot between the Ferrell Center and Baylor Ballpark.

The new Baylor Basketball Pavilion is slated to reduce capacity by some 3,000 to 3,500 seats.

In early January, when the Baylor women handed then-No. 1 Connecticut its first loss of the season, a crowd of 10,284 delirious Lady Bear fans stuffed themselves into nearly every nook and cranny of the Ferrell Center.

It wasn’t the first time a crowd that big had showed up, either.

Over the years, the Baylor men’s and women’s basketball teams have combined to draw 10,000 or more fans for a game at the Ferrell Center a total of 45 times. That includes six times where Baylor backers crammed the building to its full capacity of 10,627. (Baylor’s fans are very Title IX-conscious too, as the men and women have three sellouts apiece.)

So, why go smaller then?

Why would Tuesday’s announcement for plans for a brand new, $105-million Baylor Basketball Pavilion feature a more cozy capacity of 7,000 to 7,500 seats?

It’s a good question, one the Baylor coaches have even asked themselves.

“Initially, I wasn’t real excited about that,” Lady Bears coach Kim Mulkey said. “Because we sell out, you all know that. It’s a great atmosphere. But how many times a year do we really sell out? And who are the opponents in the Big 12 who we play a certain number of times, how many of those games do we sell out? So I think (Baylor athletic director Mack Rhoades) has obviously done his homework, with some help putting some numbers together.”

The numbers tell a story, for sure. Now, let’s first keep in mind that you can probably dig up statistics to support any argument you want nowadays. But it’s also impossible to ignore the evidence that when it comes to athletic facilities, the national trend is to reduce capacity.

In its own research, Baylor found that since 2015, nine major college basketball programs have built new arenas or renovated existing ones. Eight of the nine reduced capacity by at least 1,000 seats, with the programs shrinking by an average of 16 percent.

Those numbers are interesting. The one that really caught my attention in Baylor’s data rollout was this: Six of the nine programs increased their average attendance after the new, smaller arena arrived.

“We actually spent a lot of time just looking at different sets of data, including ticket sales for us both for women’s basketball and men’s basketball, season ticket sales, attendance number, certainly looking at trends,” Rhoades said. “When you look at some of the facility projects recently, they tend to all be downsizing. I think years ago, we probably traded a little bit TV revenue for single game or gate revenue, because now everything is available on TV.”

Oh, TV is definitely a piece of the equation. When every last game is on TV, or streaming on your mobile device, it’s perfectly natural to think, “Do I really want to spend the money to go and fight the parking, fight the crowd, for a game against this particular opponent?”

All over the country, fans are opting to just stay home.

But games have also been on TV for a while now. I also think the downsizing trend is a generational thing. It seems that some fans in the younger generations are more inclined to skip the game altogether, whether it’s on TV or not. Even major college football juggernauts like Alabama and Oklahoma have seen slight dips in attendance in recent years, and some of the exodus seems to be coming from students.

Even closer to home, consider when Baylor football moved from 50,000-seat Floyd Casey Stadium — with its perpetual tarp over the end zone bleachers — to its current on-campus 45,140-seat home McLane Stadium in 2014. I remember then-Baylor athletic director Ian McCaw expressing how the athletic department had spent a lot of time figuring out how to make the venue “right-sized” for Baylor.

And it’s worked. Attendance has actually increased in the smaller venue, as Baylor averaged 40,971 fans in its last five years at the Case compared to an average of 44,775 in the first five at McLane. (Granted, a good team and a sparkly new venue on the river helps.) Essentially, Baylor went from operating at about 82 percent of capacity at Floyd Casey to 99 percent at McLane.

“I think very similar to this facility (McLane Stadium), they got this right in terms of 45,000 seats,” Rhoades said. “So, just trying to be real with who we are and trying to create a very, very intimate environment, something that we can sell out. And certainly that’s a goal, that we can sell out each and every game.”

Here’s a formula that ought to make sense to all of us, too. Fewer empty seats + people closer to the action = Hey, what did you just say? My eardrums are bleeding!

That may be one of the most enticing aspects to Mulkey and BU men’s coach Scott Drew. It’s making a home-court advantage even more advantageous.

“The big thing nowadays in facilities is proximity,” Drew said. “In new facilities, fans are on top of you more. You’re not so spread out. The closer, the more noise. The more noise, the more motivation, and the harder it is to communicate for the other team.”

Now, there may come some games where Baylor could’ve easily filled a 10,000-seat gym. But let’s go back to my original findings. That’s happened 45 times … in 30 years at the Ferrell Center. Basically, you’re going to have one or two games a year that could potentially pack 10,000 folks in, and that’s only if future generations show up with the same frequency as their fan predecessors.

There are going to be far more nights in a season — some random Wednesday when the Lady Bears are playing the K-State women or the Bears are taking on Oklahoma State — where 7,500 seats will feel a lot more like that third bed Goldilocks ended up finding.

Here’s the best part: A smaller basketball venue may also may force Wacoans to ditch the most Waco buying trend ever: waiting until the last minute to buy a ticket.

“I trust that this is going to be awesome,” Mulkey said. “What I hope happens is that I get a ton of calls, ‘Coach, can you help me find a seat?’ And I have to say, ‘You should’ve bought season tickets.’”

But kudos to Baylor for resisting the temptation to go loose and baggy in place of finding the right fit.