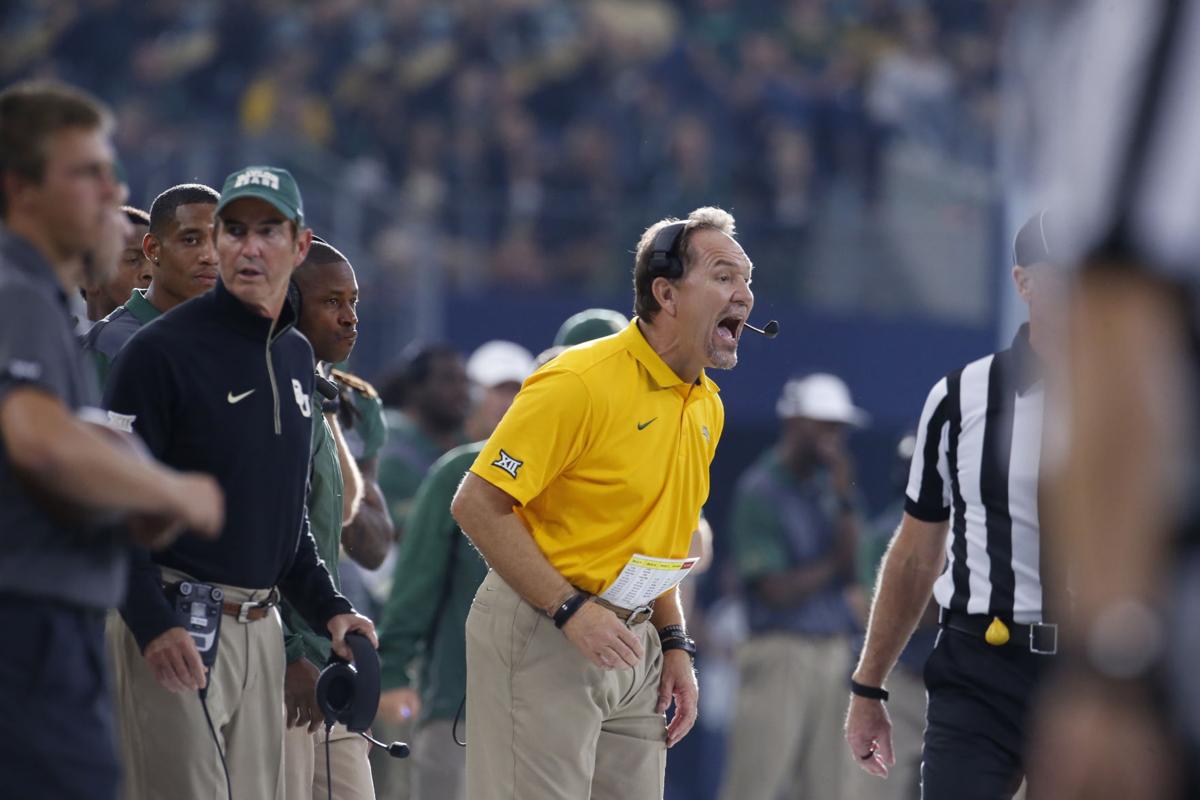 Phil Bennett and the rest of Baylor's assistants remain on staff. 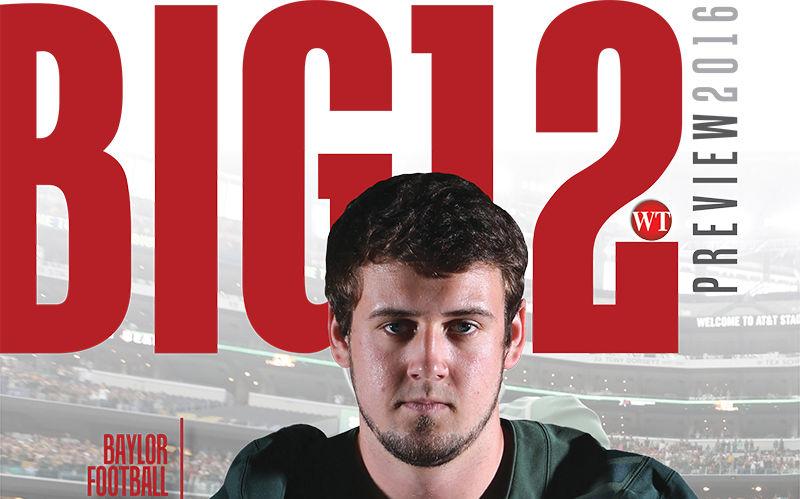 After the most successful five-year run in school history, the crash of the Baylor football program has played out before the eyes of the nation.

The dominoes didn’t stop falling there: Half of Baylor’s 2016 recruiting class is gone and most of the 2017 commitments decided to play elsewhere. Several Baylor veterans are no longer with the team, including promising sophomore quarterback Jarrett Stidham.

Now the focus is to rebuild the program with greater character and integrity, and that starts with interim coach Jim Grobe and new athletic director Mack Rhoades.

While the Bears hope to continue winning in 2016 with a talented but reduced roster, the top priority for Grobe is to make sure his players are good citizens who will represent Baylor the right way.

“The No. 1 thing in our program is for our guys to be good guys off the field,” Grobe said. “We want them to be good in the classroom and be good guys in town and society. Winning is really important but not at the expense of character. That’s the thing we’ll be pounding into our guys every day.”

The Baylor players adopted a slogan “We are More” during the summer in an effort to bond together and work on creating a positive image. They want people to know Baylor football is more than the negative stories that have dominated the media.

“Coach Grobe’s message has been we’ve got to stay together and we can’t get in trouble,” said Baylor receiver Lynx Hawthorne. “We’ve got to stay smart and have each other’s backs. We’re trying to stay out of trouble with things that could get us in trouble. Besides being teammates, we’re friends. We’ve got to watch out for one another.”

Despite a roster trimmed to close to 70 scholarship players, the Bears still have high expectations for this season. The Bears went 50-15 during Briles’ last five seasons, and the returning players believe they have the talent and experience to keep winning without the off-the-field issues that have plagued the program in recent years.

Grobe plans to work in lockstep with Rhoades to get the football program on track during the upcoming months. After Grobe came on board on May 30, Rhoades was hired as athletic director in July following a 15-month stint at Missouri.

Though Rhoades understands that he’s stepping into a messy situation, he sees it as an opportunity to establish a fresh new era at Baylor. The Pepper Hamilton report revealed that the Baylor football program operated under its own set of rules, and Rhoades wants that to change.

“I want a culture where we understand that there is no one entity, anything bigger than Baylor University itself,” Rhoades said. “There are just certain things that we won’t tolerate, and moving forward everybody will be on that same page. And when I say everybody, that’s the university, that’s the athletics department, that’s our coaches, our student-athletes, everyone.”

Baylor has made strides to build up its Title IX office under the direction of coordinator Patty Crawford. She became Baylor’s first full-time Title IX coordinator in November 2014, and the university has continued to add staff to the department to deal with issues such as sexual assault.

While Grobe will handle some disciplinary problems, he will let Baylor’s Title IX office deal with more serious issues such as sexual assault.

“There’s a problem of sexual violence across the country,” Grobe said. “When you’re a football coach and these issues come up you’re absolutely not equipped to deal with it. That’s why we have to have a path, and that’s Patty (Crawford) and Title IX.

“When we hear of misconduct, especially serious misconduct, that has to get out of our hands. We have to eliminate ourselves from the problem. I think back in the day, in the past coaches tried to deal with every problem. We’re not qualified to do that.”

Baylor athletes and coaches have gone through a great deal of Title IX training with an emphasis on preventing sexual assault issues. Last fall, Baylor initiated the “It’s on Us” campaign in which student-athletes helped bring more sexual assault awareness to campus.

“Education has to continue,” Grobe said. “We have to learn how to deal with these issues. That’s our point going forward. We’re not going to have any of these issues pop up and not deal with them. We’re going to try to do the right thing all the time. One of the keys going forward is we have to have good behavior on the part of our players.”

While Briles often took chances on bringing players to Baylor who had problems at other schools, Grobe won’t take that philosophy.

One of the biggest reasons Baylor hired Grobe as interim coach was his reputation for ethics and discipline during his 19 years as a college head coach, including a 13-year stint at Wake Forest that ended in 2013.

Grobe was also head of the ethics committee for the American Football Coaches Association under Grant Teaff, who recommended him for the Baylor job.

“Some coaches take second chance type of kids,” Grobe said. “I’ve always thought I’m not in the rehab business. I always tell my assistant coaches to bring in good character kids. I don’t want to spend all my time between 12 and one o’clock in the morning.”

In the wake of the sexual assault scandal, Baylor must repair its image and begin rebuilding its recruiting base.

Baylor also lost most of its 2017 commitments, including quarterback Kellen Mond and receiver Hezekiah Jones to Texas A&M and La Vega tight end Kedrick James to Alabama. By August, Baylor only had two 2017 commitments.

Since recruits don’t know who will be coaching Baylor beyond the 2016 season, it’s hard for the Bears’ current staff to make a strong pitch to get them on board.

When Baylor announces a permanent coach, the staff will have to make up a lot of ground during the months leading up to February’s national signing day. More extensive background checks will need to be done on recruits to try to avoid some of the recent off-the-field issues.

“The No. 1 thing we’re looking for in recruiting is we’re looking for the best kids, not just the best players,” Grobe said. “We want to find kids with great character. If he never gets on the football field he doesn’t help you one bit.”

Though Grobe is only guaranteed to coach the Bears through the 2016 season, Rhoades said he will keep all his options open.

Several coaches have been mentioned as potential candidates for the Baylor job, including successful Houston Cougars coach Tom Herman. He has a connection with Rhoades since he hired him at Houston.

“I’ve got unbelievable respect and admiration for Coach Grobe,” Rhoades said. “In just a very short time, he has brought stability. He has certainly done a great job in terms of beginning to earn the trust of some of our student-athletes, the staff. And I look forward to working with him.

“I will be open-minded. We will look to see how the season goes. We will begin to identify the process, potential candidates if need be. But we will have things lined up by the time the season ends if need be. But Coach Grobe right now is our head football coach and I’m going to get into the trenches and roll up my sleeves and work with him.”

Grobe believes Baylor is still an attractive job despite the negative issues that have dominated headlines during the past year. Baylor has some of the best facilities in the country with McLane Stadium, the Allison Indoor Practice Facility, and nutrition and weight lifting centers.

“From a football perspective this is like Disney World,” Grobe said. “Football is off the charts. When you look at the stadium and the indoor facility and our offices, the meeting rooms, when you look at how we take care of these kids nutrition-wise and the weight room. We have to take care of a lot of other issues, but I wouldn’t think there’s a coach in the country who wouldn’t look at this and say this is a great job.”

Baylor officials were mostly mum Tuesday following the resignation of Patty Crawford, other than to say they found “troubling” a request by Crawford “to retain book and movie rights” regarding her time at Baylor.