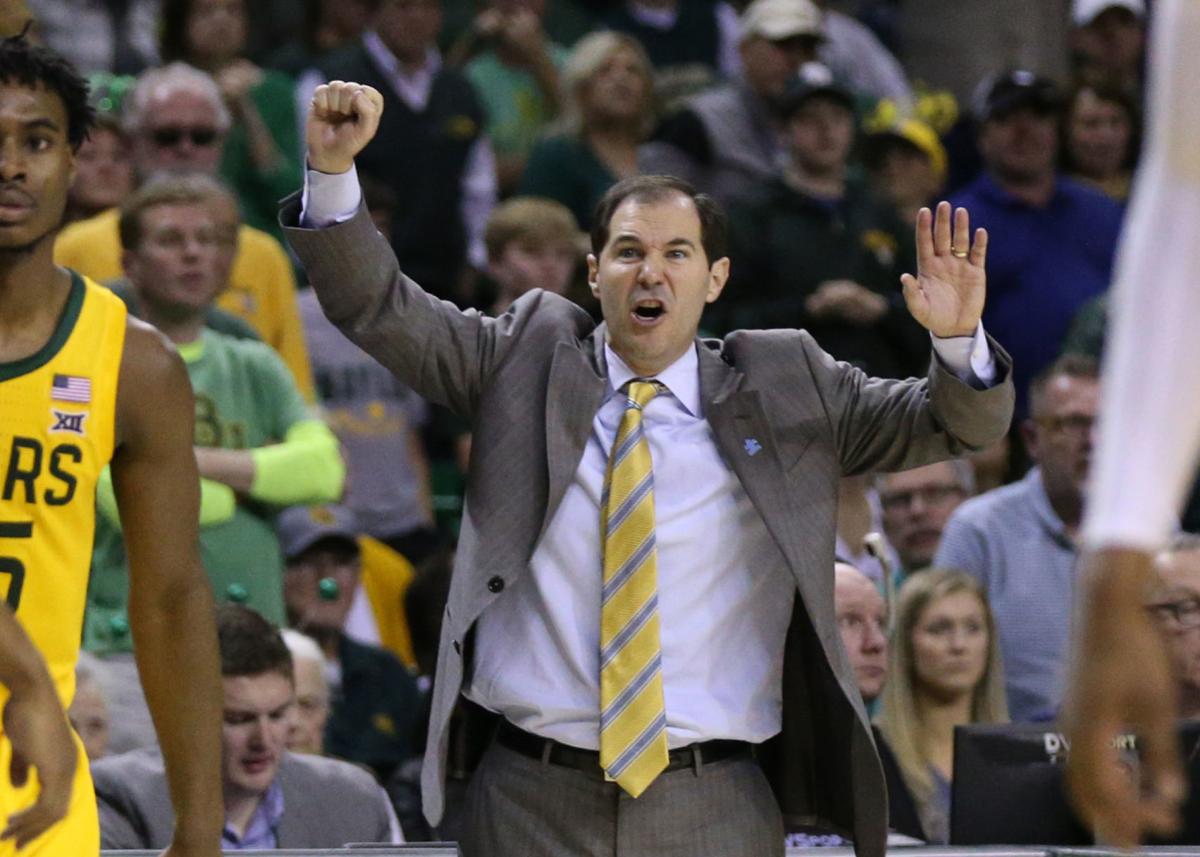 Baylor head coach Scott Drew and the Bears could take a significant step toward a Big 12 title with a win over Kansas on Saturday. A victory would give the Bears a two-game lead with four to play. 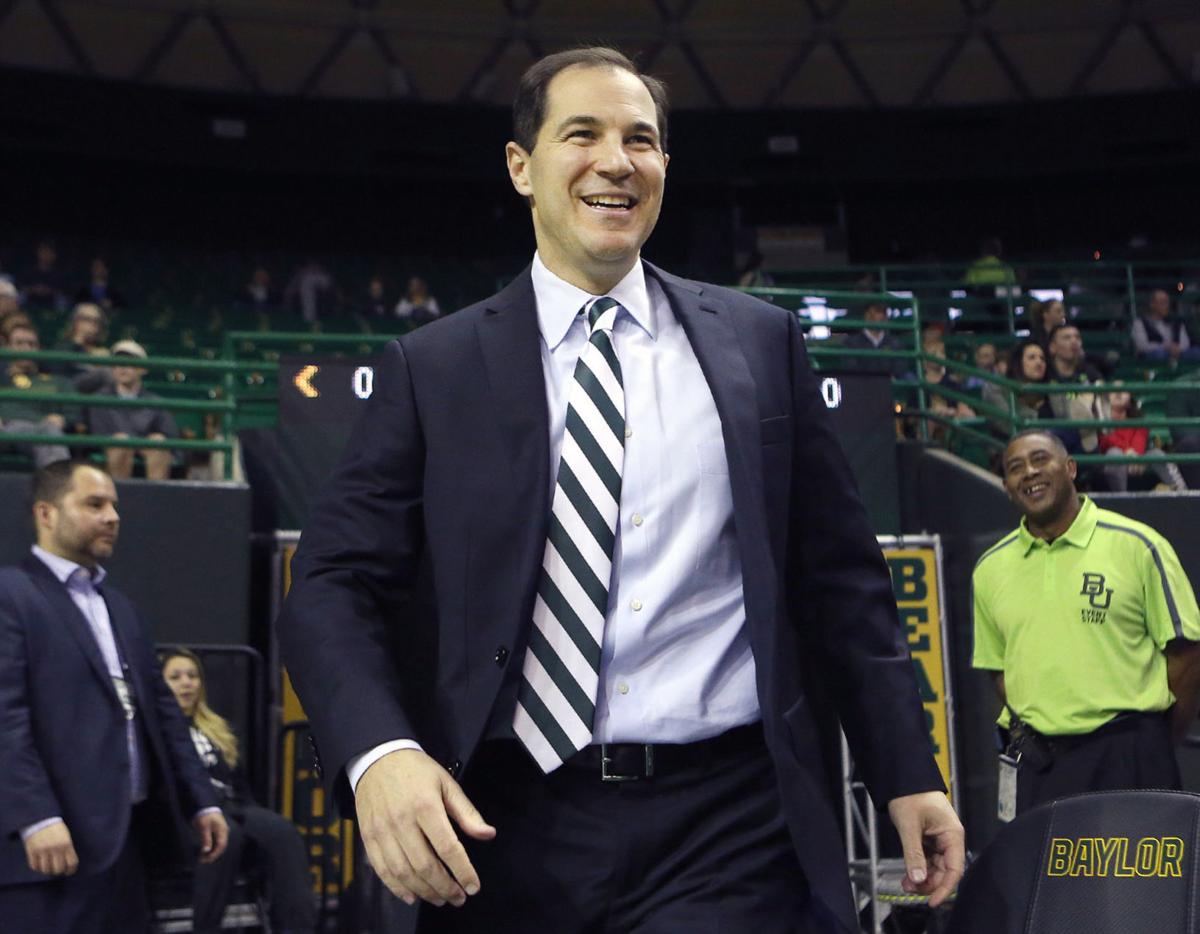 Baylor head coach Scott Drew has the Bears sitting at No. 1 in the country and in position for the program’s first Big 12 title.

There’s no college basketball arena in the country that combines the history of the game with an impassioned atmosphere quite like Kansas’ Allen Fieldhouse.

Baylor got its Big 12 indoctrination at the basketball mecca on Jan. 28, 1998, and it wasn’t pretty.

The Bears were on the wrong end of a 94-47 blowout against the No. 3 Jayhawks.

It was an eye-opening experience, and it wasn’t just because the Jayhawks were a powerhouse team. What struck you were all the championship banners: multiple national championships and enough NCAA tournament appearances and Big 8 titles to fill a museum (Allen Fieldhouse has one of those too).

Kansas had recently retired the jersey of Wilt Chamberlain, who wasn’t just the best player in Jayhawks history but arguably the greatest in basketball history. His No. 13 jersey was hanging in Allen Fieldhouse on the night the Bears got massacred.

Still a bit dazed from the Kansas experience upon returning to the Ferrell Center, one of Baylor’s assistant coaches looked up into the rafters and saw a lonely banner hanging that read: “Frank Fallon: Voice of the Bears 1953-95.”

“I think I’ve figured out the difference between Kansas and Baylor basketball,” he said. “They’ve got Wilt Chamberlain’s jersey. We’ve got Frank Fallon’s mike.”

It was a funny comment, but it held a lot of truth.

The Bears’ legendary broadcaster and longtime voice of the Final Four was better known than most of the Baylor players he covered. The Bears occasionally had some good teams over the years and future NBA players like Vinnie Johnson, Terry Teagle and Micheal Williams, but they hadn’t won a conference championship since 1950.

Scott Drew and his crew can change that in a few weeks. And fittingly, the Jayhawks will be the biggest obstacle standing in their way at a sold-out Ferrell Center at 11 a.m. Saturday.

The most impactful win during this year’s historic streak was a 67-55 win over Kansas at Allen Fieldhouse on Jan. 11. After 12 losses, it was Drew’s first win on the Jayhawks’ home court and signaled that these Bears were serious about winning their first Big 12 title.

But the Jayhawks haven’t gone away. Since the loss to Baylor, Kansas has won 10 straight Big 12 games and stand a game behind the Bears at 12-1.

It has all built up to Saturday’s showdown between the No. 1 Bears and No. 3 Jayhawks.

It’s no exaggeration to say it will be the most meaningful regular season game the Baylor men’s basketball team will play since the Ferrell Center opened its doors in 1988.

The game has been sold out for weeks. ESPN’s College GameDay will be there.

Courtside tickets were going for $930 apiece on Wednesday. It’s going to be as electric of an atmosphere as the Ferrell Center has ever seen.

Baylor won’t clinch the Big 12 title with a win over the Jayhawks, but it would give the Bears a two-game cushion with four to play. A Kansas win would push the Big 12 race into a tie.

With a program-record 340 wins in 17 seasons, Drew has already built a great resume and proven himself a masterful rebuilder after taking over a basketball program that was in turmoil in 2003 after Carlton Dotson had been arrested for the murder of Baylor teammate Patrick Dennehy.

Making eight NCAA tournament appearances since 2008, Drew has doubled the four previous appearances in school history. The Bears are light years better than the team that took the floor at Allen Fieldhouse 22 years ago and have certainly closed the gap on Kansas over the years.

Armed with the best defensive team Drew has ever coached, the Bears have their sights set on their first Final Four appearance since 1950 and a shot at the national championship. But the Bears’ first goal is to win the Big 12 title and perhaps hang a banner next to Fallon’s high in the rafters of the Ferrell Center.