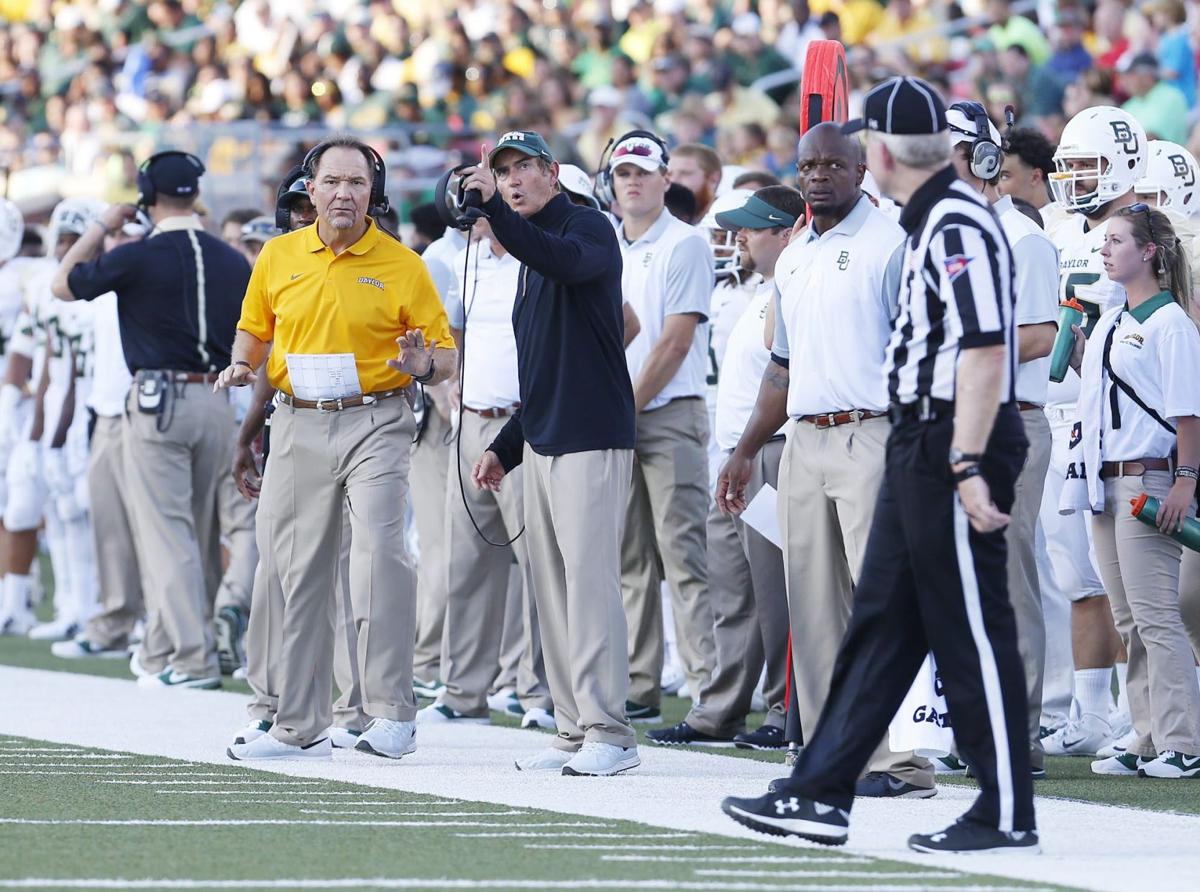 Baylor ranked last in the nation in penalties per game in 2013 and 2014. Head coach Art Briles claims simulating those situations in practice is difficult, especially with the Bears' fast-paced offense. 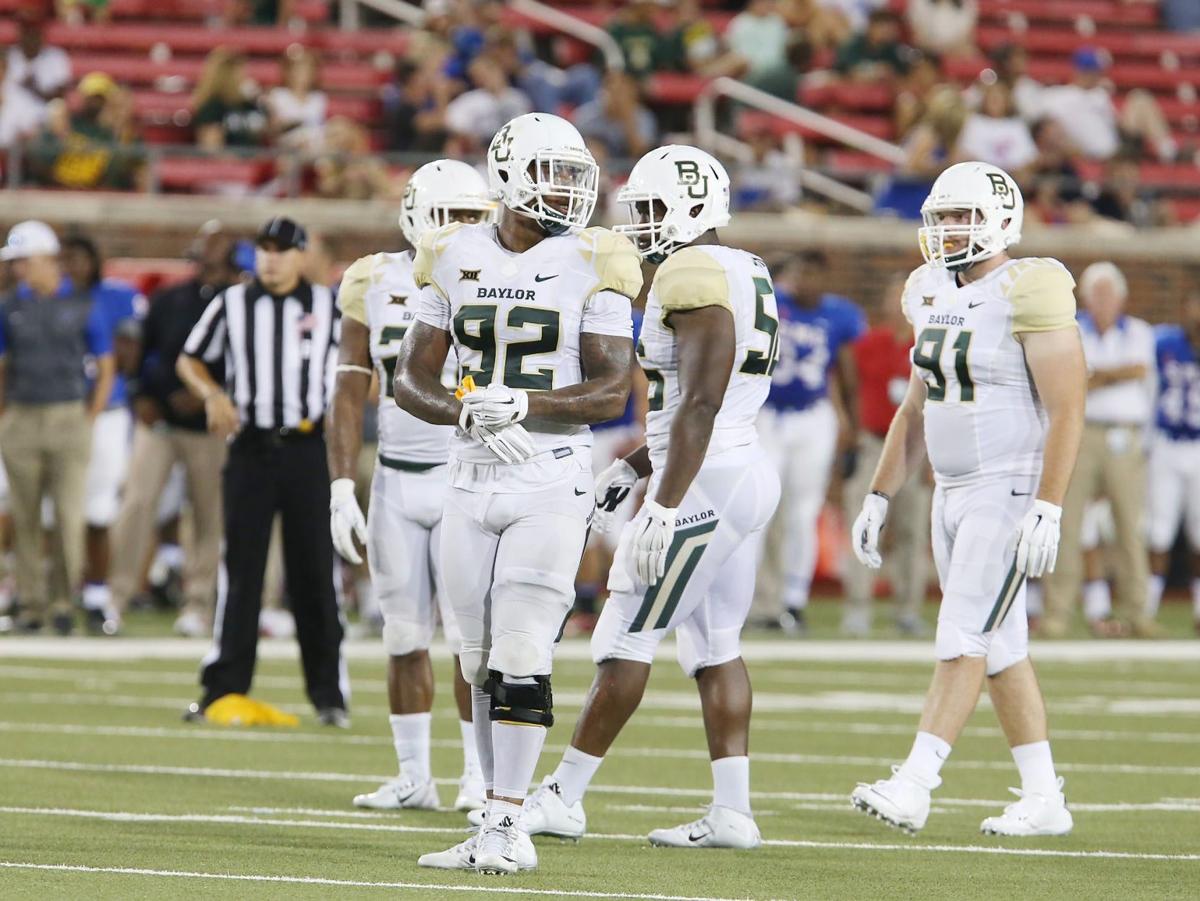 The Bears were penalized 13 times against SMU in their season opener. They have ranked no better than 88th nationally in number of penalties since 2011.

Baylor ranked last in the nation in penalties per game in 2013 and 2014. Head coach Art Briles claims simulating those situations in practice is difficult, especially with the Bears' fast-paced offense.

The Bears were penalized 13 times against SMU in their season opener. They have ranked no better than 88th nationally in number of penalties since 2011.

If any FBS school knows what a field littered with yellow penalty flags looks like, it’s Baylor.

In each of the past two seasons, Baylor ranked last in the country in penalties per game. The Bears averaged 9.2 flags a contest in 2013 and 9.8 last year. If they were hoping to improve that element of their play in 2015, they’re not off to the greatest of starts. After one game against SMU, Baylor’s 13 penalties are tied for 122nd nationally — dead last — along with Florida Atlantic and Miami of Ohio.

So, what gives? Do the Bears care about eliminating the flag football from their midst?

“Addressing them in practice, it’s hard to simulate game-type situations with tempo,” Baylor coach Art Briles said. “When the ref is going to set the ball and when they’re not, crowd noise and claps, things that go on in the game that you don’t concern yourself with in practice. I’m talking about illegal formations and false starts.

“The other penalties — holding, facemasks, that kind of stuff, once again you’re talking about it in practice but you’re not getting penalized for it. It’s just part of playing, and you’ve got to hope that you’re able to overcome if you get those. Fortunately we have been.”

It’s true that Briles’ Bears haven’t allowed the abundance of flags to hinder their ability to win games. Baylor is 41-12 since 2011 with consecutive Big 12 championships despite ranking no higher than 88th nationally in number of penalties in that span.

Briles mentioned tempo, and Baylor’s NASCAR-like pace on offense often leads to the officials dumping lots of laundry. Last year Texas Tech, which runs a similar up-tempo spread attack to Baylor, finished 127th nationally in number of penalties, just ahead of the Bears. Oregon, another pedal-pushing offense, finished 119th, yet played for the national championship.

Meanwhile, three of the top 10 least-penalized teams in the country were the disciplined, slower-paced service academies — Navy (No. 1), Air Force (No. 2) and Army (No. 7).

However, Baylor players know that penalties don’t exactly aid the process of trying to win. Even when there is a justifiable reason for a flag.

“You’ve just got to focus,” offensive tackle Spencer Drango said. “Actually the two false starts on the line (against SMU), a guy jumped on the opposite side and made one of our guys react a little bit. The other the center didn’t hear the snap. We went and he didn’t snap it. It’s kind of one of those things where those things happen. But those are easy to fix.”

In basketball, it’s been suggested that the hardest call for an official to make is the block-charge call. In football, the same could probably be said for pass interference in the secondary. That’s a penalty that plagued Baylor throughout last season, especially in its 41-27 loss at West Virginia. The Bears were flagged for seven pass interference infractions in that defeat.

“Receivers get away with a lot,” cornerback Ryan Reid said. “A lot of pushing, moving you out of the way. Being a little guy, I just try to get physical back with it. But it’s always called on the defense. It’s something me and Coach (Phil) Bennett have talked about a lot. … But you won’t see it any more. We’ve worked on it, we’ve got it down. It’s cleaned up.”

Reid said that he doesn’t want to lose his aggressiveness as a defender, but he’s learning to channel it into more productive ways.

Fatigue can facilitate an outbreak of flags, too. A tired defender is more likely to grab and hold his charge. Similarly, an offensive lineman or receiver who is gassed may be thinking more about getting a drink than the snap-count sequence.

“When you get tired, you lose focus,” Drango said. “You have to be able to be tired and be focused at the same time. Or not be tired, which is the best thing to do.”

Drango said that few developments frustrate he and his fellow linemen any more than a false start flag that backs up the team five yards. But they can’t let that frustration linger, he added. They’ve got to forget about the mistake and move on, or else that initial flag that hit the turf could multiply and grow friends.

“If you dwell on that, you’re going to mess up in the future,” Drango said. “Maybe the next play. It definitely helps to have that ‘clear it’ mindset and not worry about what you did in the past, because you can’t change it.”

Bear Facts: Baylor coach Art Briles said linebacker Taylor Young won’t play against Lamar after suffering an AC joint sprain against SMU. “He’s doing good quite honestly but I don’t think he’s quite ready to go this week. Hopefully he’ll be back for Rice (on Sept. 26).” … The only true freshmen to play for the Bears against SMU were backup quarterback Jarrett Stidham and punter Drew Galitz. Briles hopes to redshirt the rest of them. Highly-touted freshman safety J.W. Ketchum didn’t make the trip with the team to SMU but is practicing. He was arrested for marijuana possession Aug. 15 in Waco. … Briles said defensive end Shawn Oakman and safety Orion Stewart will start against Lamar after serving one-game suspensions for violations of team rules.

Former Waco High, Baylor linebacker out of prison, wants to help others

Baylor played 400-pound tight end LaQuan McGowan as an upback on its kickoff team in the season opener against SMU. Where else would you most like to see McGowan line up?

Too much flag football

Baylor has struggled to limit penalties over the past five years. A breakdown:

The name suggests gun-slinging leader of men, and Carson Earp has done a bang-up job of living up to that name.

The last time Baylor played Lamar in the 1981 season opener, the Cardinals pulled off an 18-17 stunner at Floyd Casey Stadium.

WACO — Seth Russell can certainly throw the ball in fifth-ranked Baylor's big-play offense. There are plenty of talented receivers to catch it…

Despite beating SMU and Lamar by a combined 70 points, No. 5 Baylor feels anything but fat and happy.

Art Briles wants to get ‘edge’ back after Bears’ struggles

Baylor coach Art Briles wants to get his edge back Saturday against Rice and plans to make sure his team is along for the ride.