10 percent of US labor force out of work as 6.6 million more Americans file for jobless aid 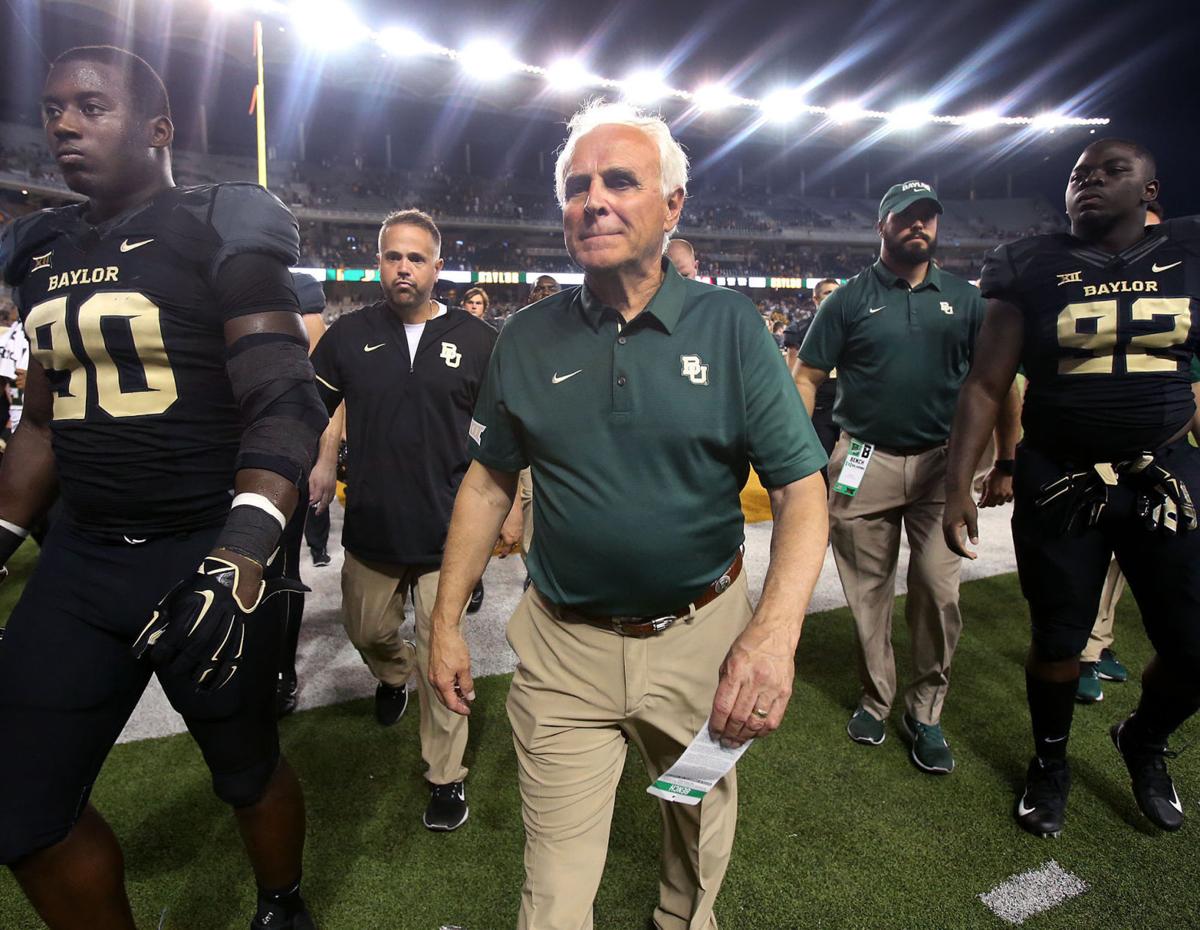 Denny Rhule (center) walks off the field as his son and Baylor head coach Matt (back left) walks behind him. 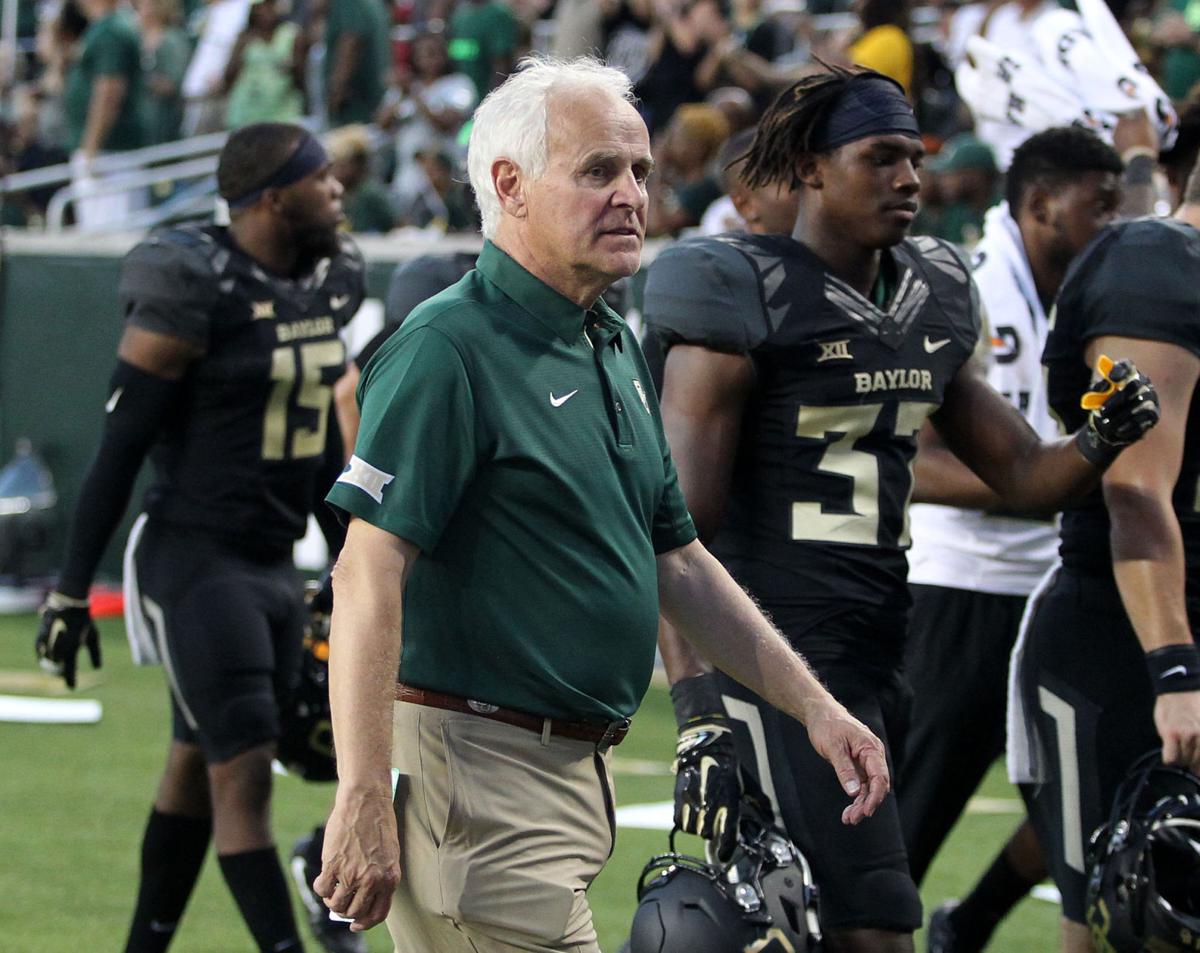 Denny Rhule heads to the locker room with the Baylor team at halftime against Oklahoma. 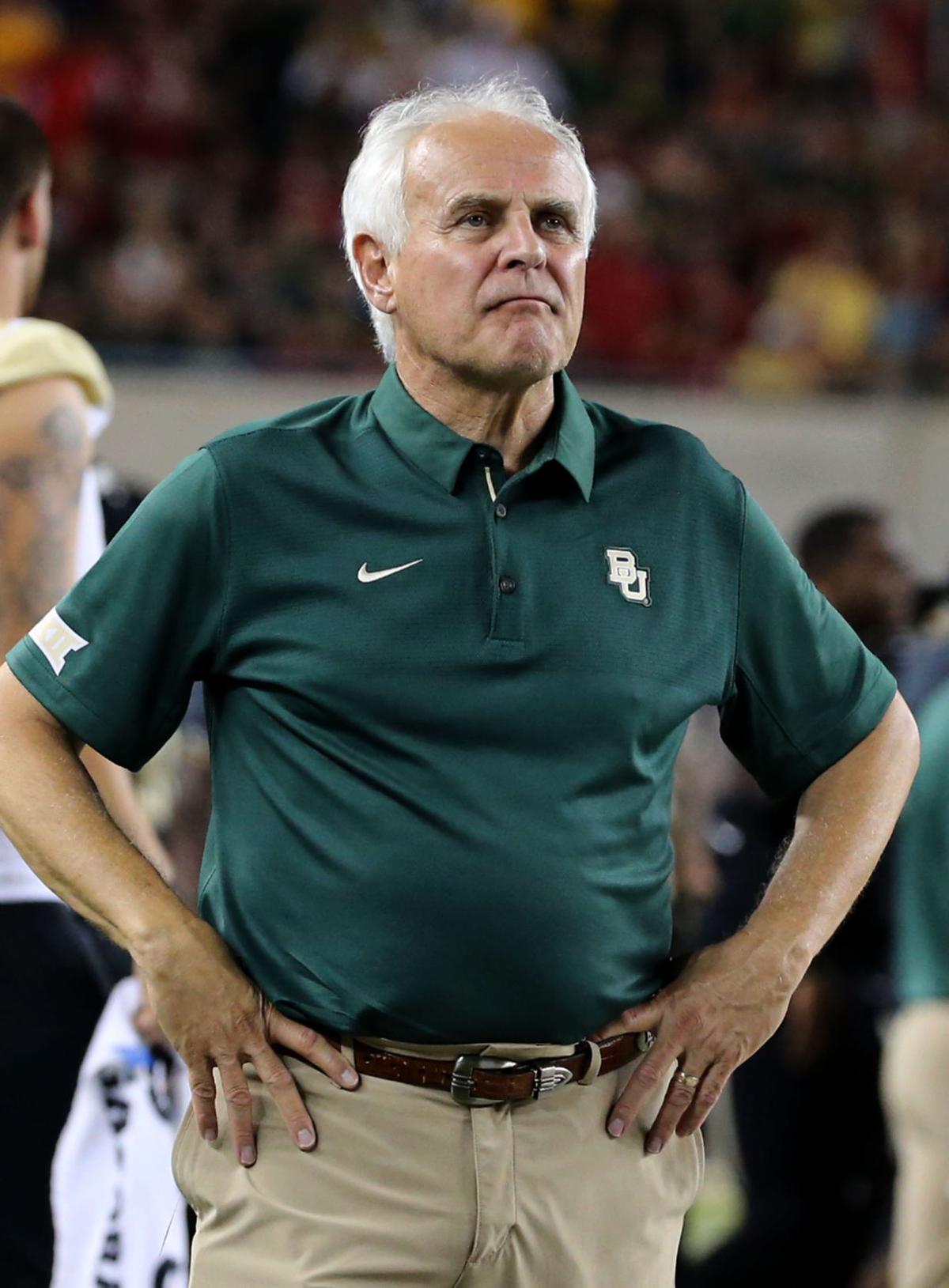 Denny Rhule (center) watches Baylor's the game against Oklahoma from the sideline.

Denny Rhule (center) walks off the field as his son and Baylor head coach Matt (back left) walks behind him.

Denny Rhule heads to the locker room with the Baylor team at halftime against Oklahoma.

Denny Rhule (center) watches Baylor's the game against Oklahoma from the sideline.

After reeling off a pair of 10-win seasons at Temple University, Matt Rhule became a hot name on the college football coaching carousel last December.

Both Baylor and Oregon wanted him, and to most people the choice seemed obvious.

Oregon had become a hip college football program that had played in the first College Football Playoff championship game in January 2015. Baylor was in the throes of a sexual assault scandal that had made the football program a pariah and cost successful coach Art Briles his job.

But Denny Rhule, a Nazarene minister, had always taught his son that the most comfortable route isn’t always the best one to take.

“I told him to pray and go to which school that God is going to use them the most,” Denny Rhule said. “I try to teach my kids to not be safe and to not always choose jobs or positions and where they live based on just being comfortable. Step out like the disciples did and be challenged, and I think Matthew has done that here.”

Matt Rhule chose Baylor even though he knew it would be a grueling challenge to restore the program’s tarnished image and rebuild a team that had been gutted by player departures.

Fielding a squad that has already started 24 freshmen and sophomores, the Bears are off to an 0-5 start as they prepare for their next Big 12 game against No. 15 Oklahoma State on Saturday in Stillwater.

Rhule has built a coaching staff that he leans on every day as the Bears search for a breakthrough win. For moral and spiritual support, Rhule’s 68-year-old father is at his side for every practice and game.

“It’s wonderful because of his patience and his perspective,” Matt Rhule said. “When I enter good discussions, disciplined discussions, hard discussions, I always have a second set of eyes, someone who is wise with experience. Someone who can help me make sure I have the proper perspective.”

During Rhule’s four seasons as Temple’s head coach, his father became a bigger presence around the Philadelphia school each season as he led chapel discussions and helped players work through problems. He saw Matt build a program that went 2-10 in 2013 and 6-6 in 2014 before delivering 10-win seasons in 2015-16.

After Matt took over the Baylor program last December, Denny and his wife, Gloria, followed their son to Waco. He voluntarily leads weekly Bible studies with the coaching staff and some players.

“I do a Bible study Wednesday mornings for the coaches and some of the players who have children, it’s on fatherhood,” Denny Rhule said. “Basically what I do is try to build relationships, try to get close to the players, and provide a place where it’s safe with a good family atmosphere. They ask me for feedback once in a while and I give them what I see. I’ve had some good talks with the players so far. It’s a good bunch of kids and I look forward to doing it for a long time.”

Denny not only has a ministerial background, he was also a longtime coach for a variety of sports at high schools, including football, baseball, basketball, soccer and softball.

While Matt doesn’t usually discuss the technical side of football with his father, Denny has taught him a lot about dealing with players on a personal level over the years.

“When I was younger, he was my baseball coach and my basketball coach,” Matt Rhule said. “The effect he had on me as a coach, seeing the way he dealt with players, and the way he was demanding and loving, are things that have impacted me, probably more as a coach than the X’s and O’s.”

With his father taking different jobs around the country as a Nazarene minister, Matt was exposed to a lot different cultures and socioeconomic groups.

The most dramatic move for Denny and Gloria Rhule and children Matt and Dana came in 1980 when they moved from Kansas City to New York City. Denny felt a calling to minister to the homeless in the Times Square area of Manhattan.

“It was good for our kids because they saw different people,” Denny Rhule said. “They saw different races and socioeconomic groups. The church had a big outreach to the homeless and they were part of that. I tried to include them as much as we could. I think it benefited them in the long run being there 11 years.”

One of the big events of the year was a Thanksgiving dinner that brought many homeless and poor people together for a special day.

“Every Thanksgiving we had a big banquet for the homeless with nice china,” Denny Rhule said. “We’d invite the poor and the homeless, and about 300 to 400 people would come. We had a big ministry to the poor and people who were marginalized. We gave them clothing, referral for jobs, training, education. Later on we had a health clinic. We had doctors and nurses who took care of people.”

To make ends meet, Denny coached and taught at private high schools around New York City. It was a unique dichotomy for Matt to interact with such a wide spectrum of people. Those experiences have helped him relate to a variety of people as he’s built his coaching career over the last 20 years.

“At Roosevelt Island where we lived, we had a lot of diplomats’ kids,” Denny Rhule said. “At Times Square we had the homeless kids, so he had a variety of kids that he met. Matthew was the kind of guy who made friends no matter what. If you were at a place for five minutes, he’d have four friends. He’s always been like that.”

Seeing his father’s example, Matt told him that he wanted to coach, long before he knew the intricacies of a spread offense and a 4-3 defense.

“I think it was 5 or 6 when he said he was going to go to Penn State and play football and then become a coach,” Denny Rhule said. “I kind of patted him on his head and said, ‘Go get ‘em.’ I didn’t think much about it, but that’s what he wanted to do and he followed through.”

Denny said Matt began playing football when he was 12 while the family lived in New York City. But his career really picked up during his junior year at State College (Pa.) High School after the family moved.

An injury forced Matt to switch from quarterback to center, but Denny believes it helped him learn the game from a broader perspective. Matt’s high school teammate was Jeff Nixon, who played running back and is now Baylor’s co-offensive coordinator.

“It was good for Matt because the center had to make a lot of audible calls and change blocking schemes,” Denny Rhule said. “He also had the knack and football sense from playing quarterback of knowing what to call and different formations. They had a good football team. Jeff was a great running back.”

Rhule was a walk-on linebacker for Penn State and began his coaching career as a volunteer assistant under Joe Paterno in the spring of 1998. From there Rhule coached linebackers for a year at Albright College in Reading, Pa., before coaching the defensive line at the University of Buffalo for two seasons.

After three years as a Western Carolina assistant, Rhule made his first tour of duty at Temple from 2006-11 as an assistant coach before spending one season in the NFL as a New York Giants assistant offensive line coach in 2012. He became Temple’s head coach in 2013 before taking over at Baylor.

Throughout the many stops on his journey, Matt has always tried to pattern his beliefs, the way he deals with people, and his relationships with his family after the example set by his father. Matt and his wife, Julie, have a son, Bryant, and daughters Vivienne and Leona.