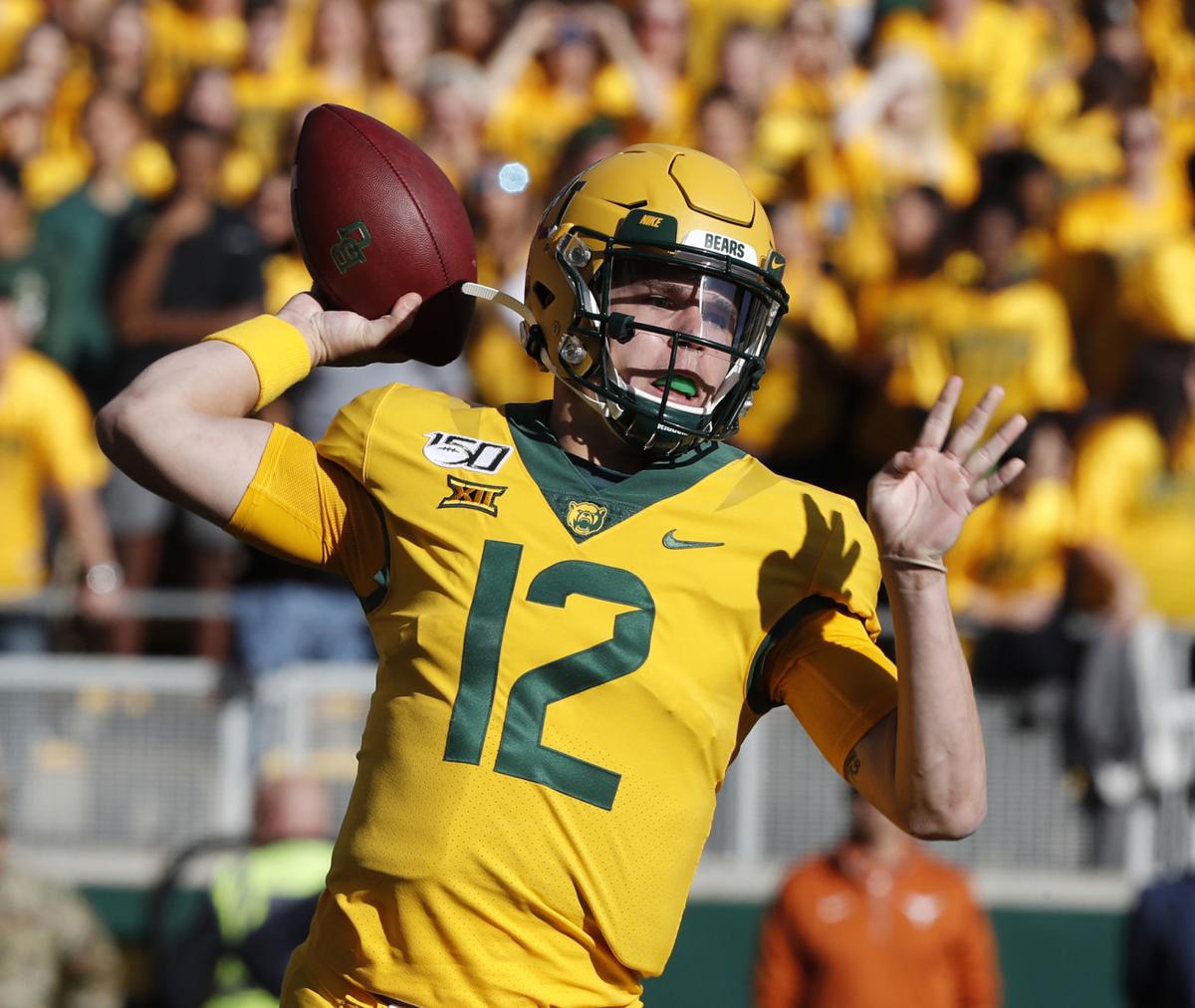 Baylor Bears quarterback Charlie Brewer (12) has been keeping in touch with teammates during the COVID layoff period and expects the offense to be explosive this season. 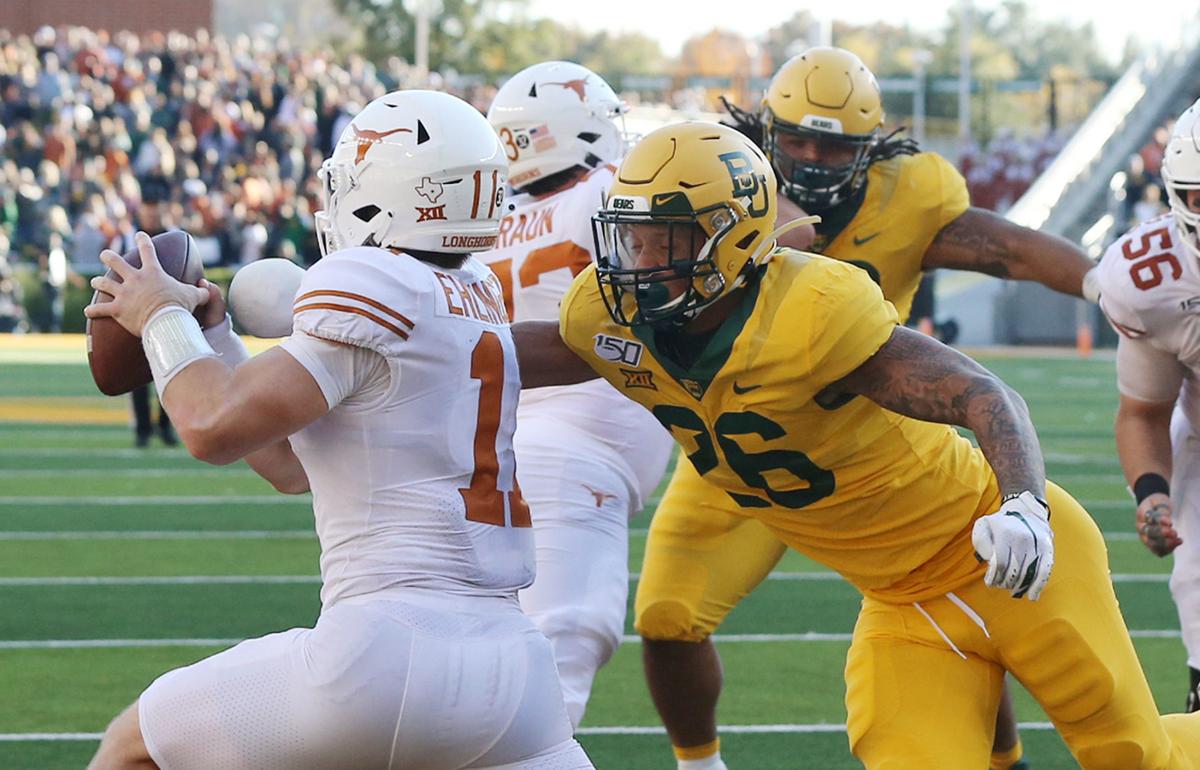 Baylor linebacker Terrel Bernard believes the defense will be strong this year, despite nine starters graduating or leaving the team for the NFL draft. 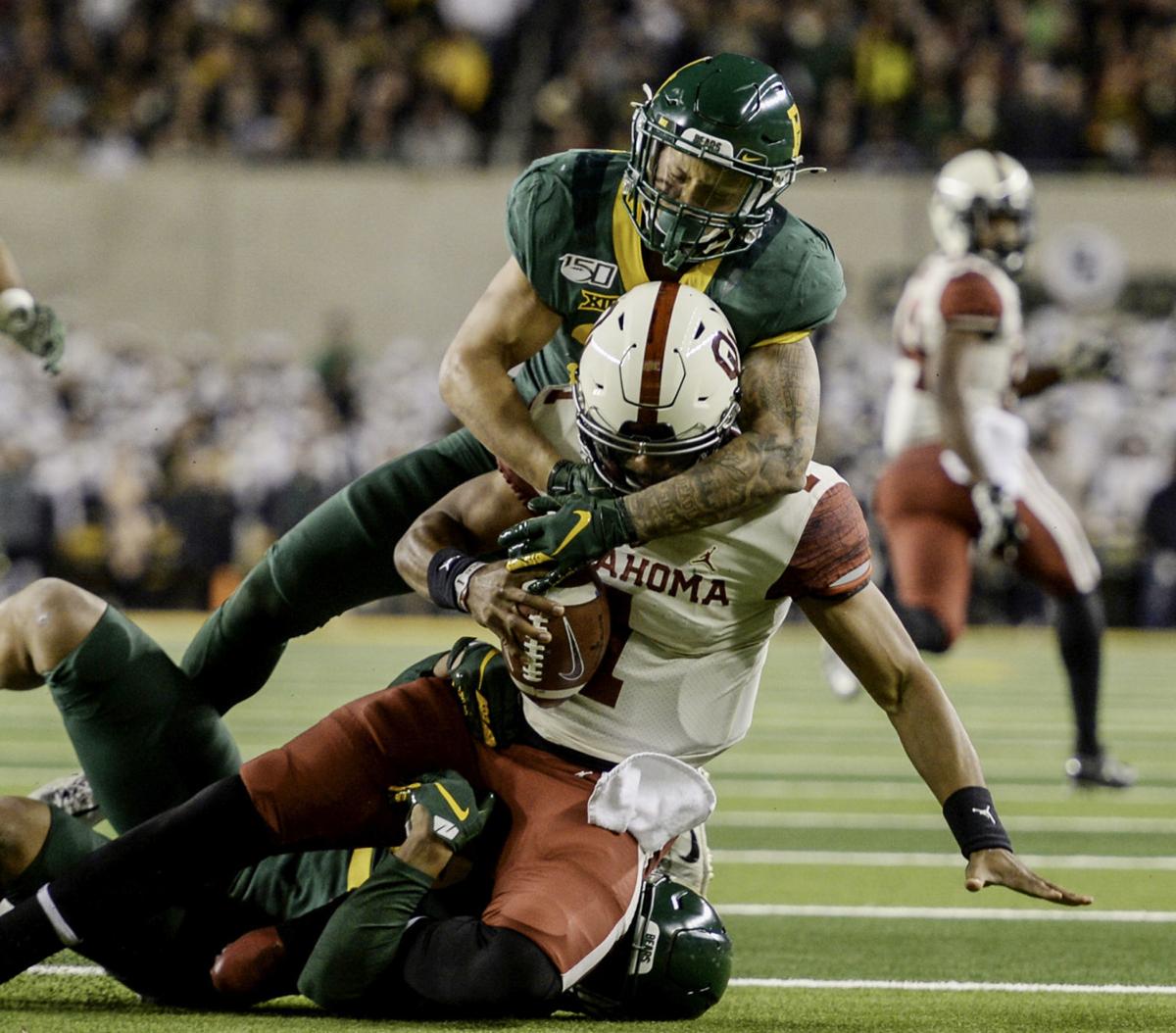 Baylor linebacker Blake Lynch and Baylor linebacker Terrel Bernard, top, tackle Oklahoma quarterback Jalen Hurts, in the first half. Bernard has stepped us as a leader during Baylor's COVID hiatus.

Baylor Bears quarterback Charlie Brewer (12) has been keeping in touch with teammates during the COVID layoff period and expects the offense to be explosive this season.

Baylor linebacker Terrel Bernard believes the defense will be strong this year, despite nine starters graduating or leaving the team for the NFL draft.

Baylor linebacker Blake Lynch and Baylor linebacker Terrel Bernard, top, tackle Oklahoma quarterback Jalen Hurts, in the first half. Bernard has stepped us as a leader during Baylor's COVID hiatus.

After the coronavirus outbreak forced Baylor students off campus in mid-March, the Bears have needed their leadership more than ever.

Brewer and Bernard have helped keep their teammates bonded with daily communication through phone calls, texts and virtual meetings. Nobody knows the pulse of the team better.

The Big 12 announced Friday that football players can return to campus June 15 for voluntary conditioning and training exercises. But Brewer and his teammates will be excited for the day when they will be cleared for team workouts.

“Hopefully we can get back sooner than later,” Brewer said. “It’s been way too long. I think a lot of our guys have taken advantage of this time apart, but we have to hit the ground running when we return.”

Before the COVID-19 outbreak led to the cancelation of spring football practice nationwide, Baylor coach Dave Aranda was looking forward to seeing his team on the field for the first time since he arrived in January.

Instead the Baylor coaches have adapted to social distancing by connecting with players spread all over the map through virtual team and position meetings.

Brewer and Bernard have taken the extra step by making sure their teammates needs are met. Whether it’s questions about offensive and defensive schemes or workout strategies, the two veterans have been there to provide support.

“It’s pretty much an everyday thing that we’re staying in contact with people,” Bernard said. “We do a lot of group messages. We share workout videos with each other, we talk about the new playbook and stuff like that. It’s been a little different, but we’ve gotten the hang of it.”

Nobody is more respected on the team than Brewer, who is entering his fourth season as the starting quarterback. Brewer has passed for 7,742 career yards and 51 touchdowns while rushing for 885 yards and 18 scores heading into his senior year.

But it’s his toughness and willingness to sacrifice for the team that have enhanced his leadership skills. He’s liked the way his teammates have responded to his leadership during their time apart for the last 2½ months.

“I think everyone is doing a great job of holding people accountable, and that starts with me,” Brewer said. “I need to know myself inside and out, and I have to set the example and let other people see I’m doing everything I can right now for the team. That includes what we need to be doing strength and conditioning wise. I think a lot of teammates have taken it very seriously and understand what we need to do to reach our goals.”

Last year, Brewer was forced to leave three of the last four games due to head and neck injuries. But he said he’s feeling healthy now and is anxious to get back on the field.

“I feel great right now,” Brewer said. “I’ve been on a workout program and I’m 100 percent. I feel like I’m in great shape.”

With seven offensive starters returning, Baylor’s offense should be a strong point in the 2020 season. Brewer and his teammates have been absorbing new offensive coordinator Larry Fedora’s playbook, and expect to move at a faster tempo than the last three years.

Playmakers return all over the field for the Bears such as receivers Tyquan Thornton, RJ Sneed and Josh Fleeks, and running backs John Lovett and Trestan Ebner.

Spending much of his time back home in Austin, Brewer has been able to keep his arm in shape. But he can’t wait to get back with his full set of playmakers.

“We’ve got guys back who are incredible athletes and teammates,” Brewer said. “I have to make sure I’m on top of my game leading the offense and getting the ball out quickly. That’s on me to make it happen and to be on top of reads and things like that.”

Brewer has helped the Bears rise from 1-11 in his freshman season in 2017 to 7-6 in 2018 to 11-3 last year. The Baylor veterans have seen the work ethic it takes to build an upper echelon program, and Brewer believes that mindset will continue to make the Bears stronger.

“Teamwise we have a real strong bond,” Brewer said. “A lot of the guys who are seniors didn’t win a lot at first. But we’ve really bonded together, and have been able to build confidence and learn a little more each year. But we put last year behind us a long time ago because we know we’ll keep needing to improve.”

While the offense returns a ton of experience, the Bears lost nine of 11 starters from the best defense in the Big 12 in 2019. That list starts with All-America defensive end James Lynch and a load of all-Big 12 players, including nosetackle Bravvion Roy, linebacker Clay Johnston and safeties Grayland Arnold and Chris Miller.

Bernard and cornerback Raleigh Texada are Baylor’s only two returning defensive starters. But Bernard believes the Bears will still put a superb defense on the field because last year’s backups saw a lot of playing time and are ready to step into starting roles.

“I know we’ll still be good just because a lot of the guys were playing last year,” Bernard said. “They got the perspective of knowing what it takes to become a good defense, and the everyday routine you have to go through. Definitely as a whole team we saw where we could go and what it takes and how to get there.”

Bernard was serving in a backup role before Johnston went down with a midseason knee injury. Transitioning from outside to middle linebacker, Bernard emerged as an all-Big 12 player as he led the Bears with 112 tackles while collecting 4.5 sacks, three fumble recoveries and an interception.

Now the fourth-year junior is the veteran leader that the rest of the defense looks to for guidance.

“Obviously it helps to lead when you play a lot,” Bernard said. “What I can tell the other guys is just keep working and be ready for your opportunity because you never know when it’s going to be your time.”

Baylor put more speed on the field last season by switching from a 4-3 alignment to a 3-3-5. New Bears defensive coordinator Ron Roberts plans to use both 4-3 and 3-3-5 schemes and play with an aggressive defensive mindset.

Though some of the terminology is different than last year, Bernard expects his teammates to quickly adapt to Roberts’ defense.

“Coach Roberts’ defense is similar to Coach (Phil) Snow’s,” Bernard said. “It’s not that hard to learn, it’s just putting in the amount of time and effort. Going over it has helped a lot, and learning a new system is always fun.”

In addition to keeping constant communication with coaches and teammates, Bernard endured a heavy 18-hour online class load during the spring semester, and will need just three hours this summer to complete his degree in kinesiology.

Although he’s spent a lot of time this spring in Waco, Bernard also has been back home in La Porte where he’s learned to make due with old weight lifting equipment that he grew up with.

“I’ve been lifting a barbell that I had in junior high,” Bernard said. “It’s actually been kind of fun getting back to basics.”

Like Brewer, Bernard can’t wait to get back to campus with the entire team.

“I’m ready,” Bernard said. “It’s been long enough. There are a lot of guys in Waco just waiting to get back together.”