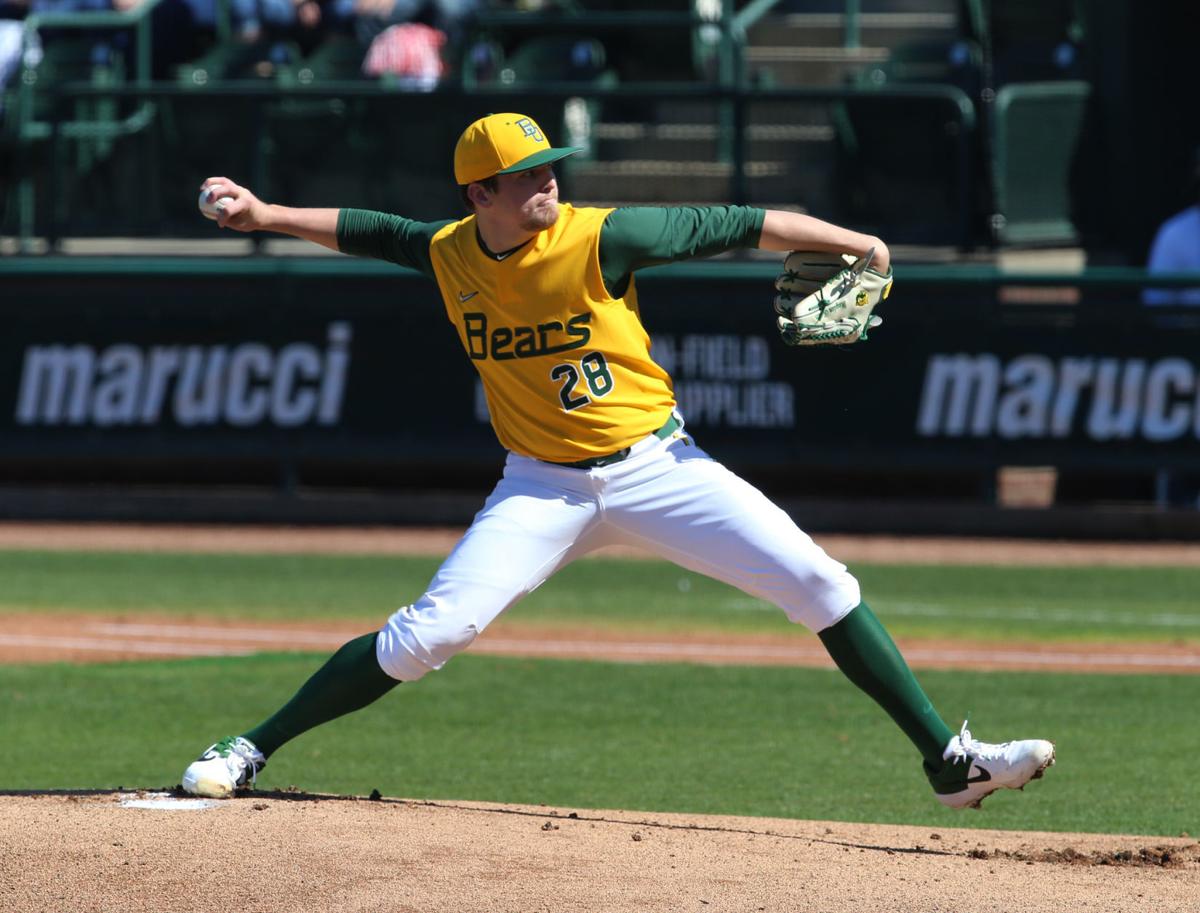 Baylor’s Hayden Kettler, on the mound against Nebraska, was the Bears’ first starting pitcher to earn a win this season. 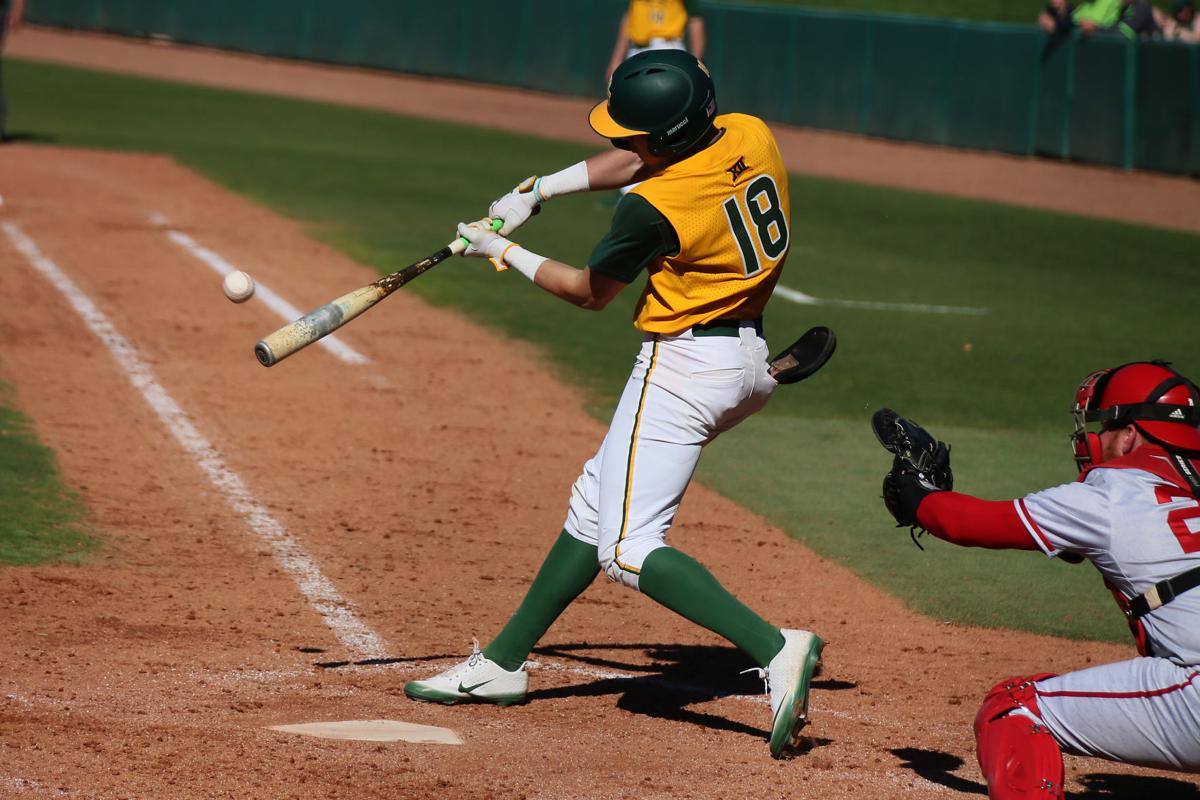 Baylor outfielder Jared McKenzie connects for a two-RBI single in the sixth inning against Nebraska. 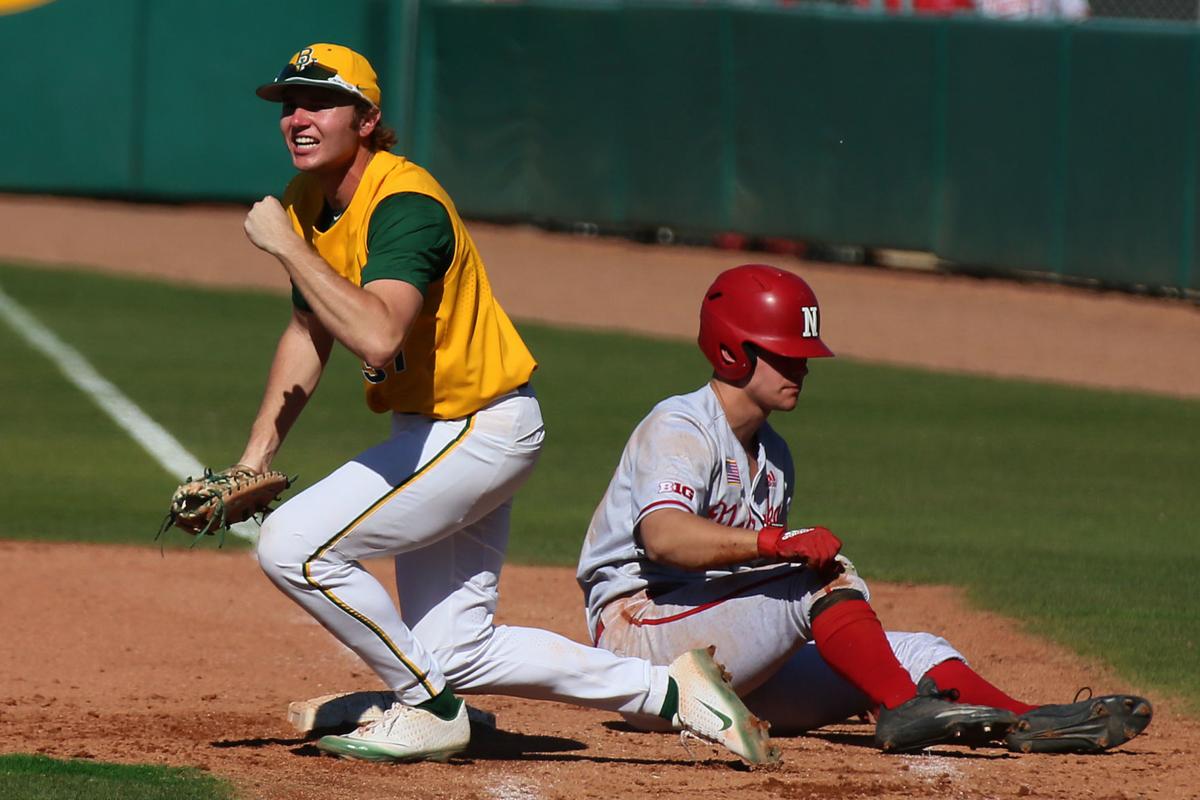 Baylor first baseman Chase Wehsener reacts to a double play in the sixth inning with the bases loaded against Nebraska. Nebraska’s Joe Acker, right, grounded out to third baseman Carlos Cardoza-Oquendo who tagged the bag and threw to first. 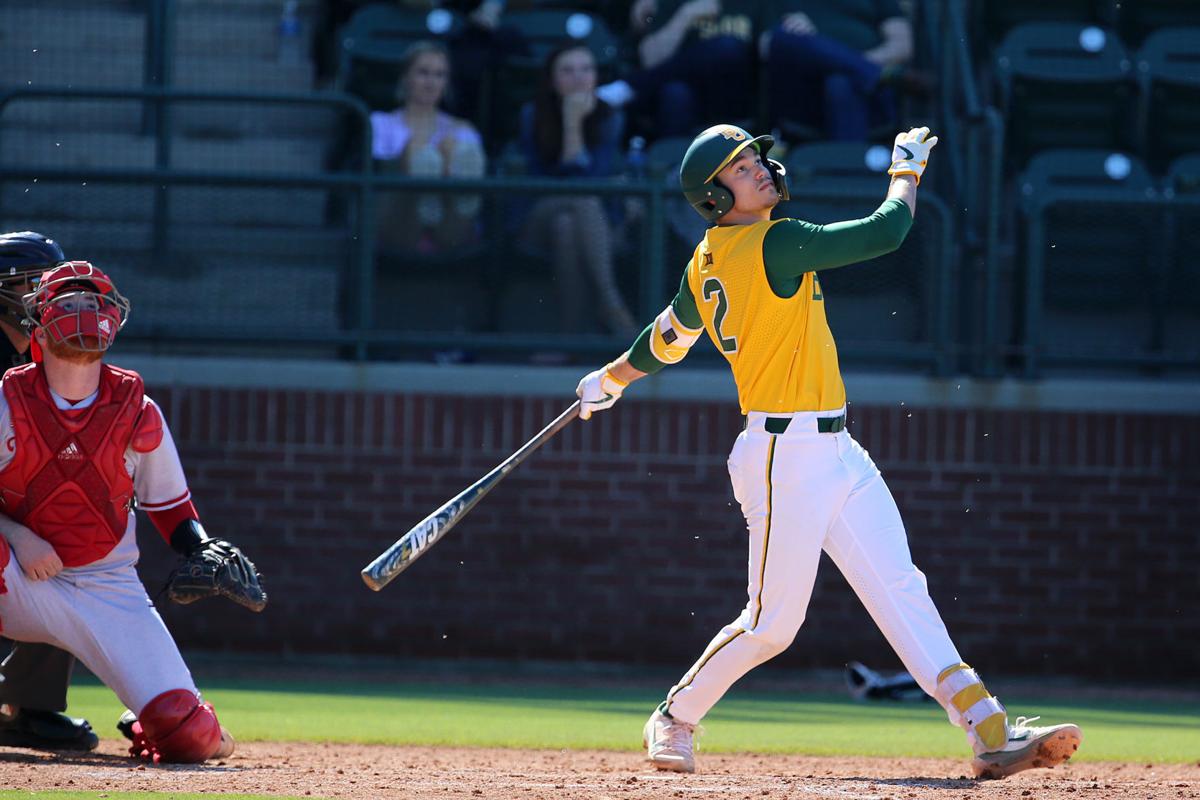 Baylor infielder Nick Loftin connects for a two-RBI triple against Nebraska in the third inning. 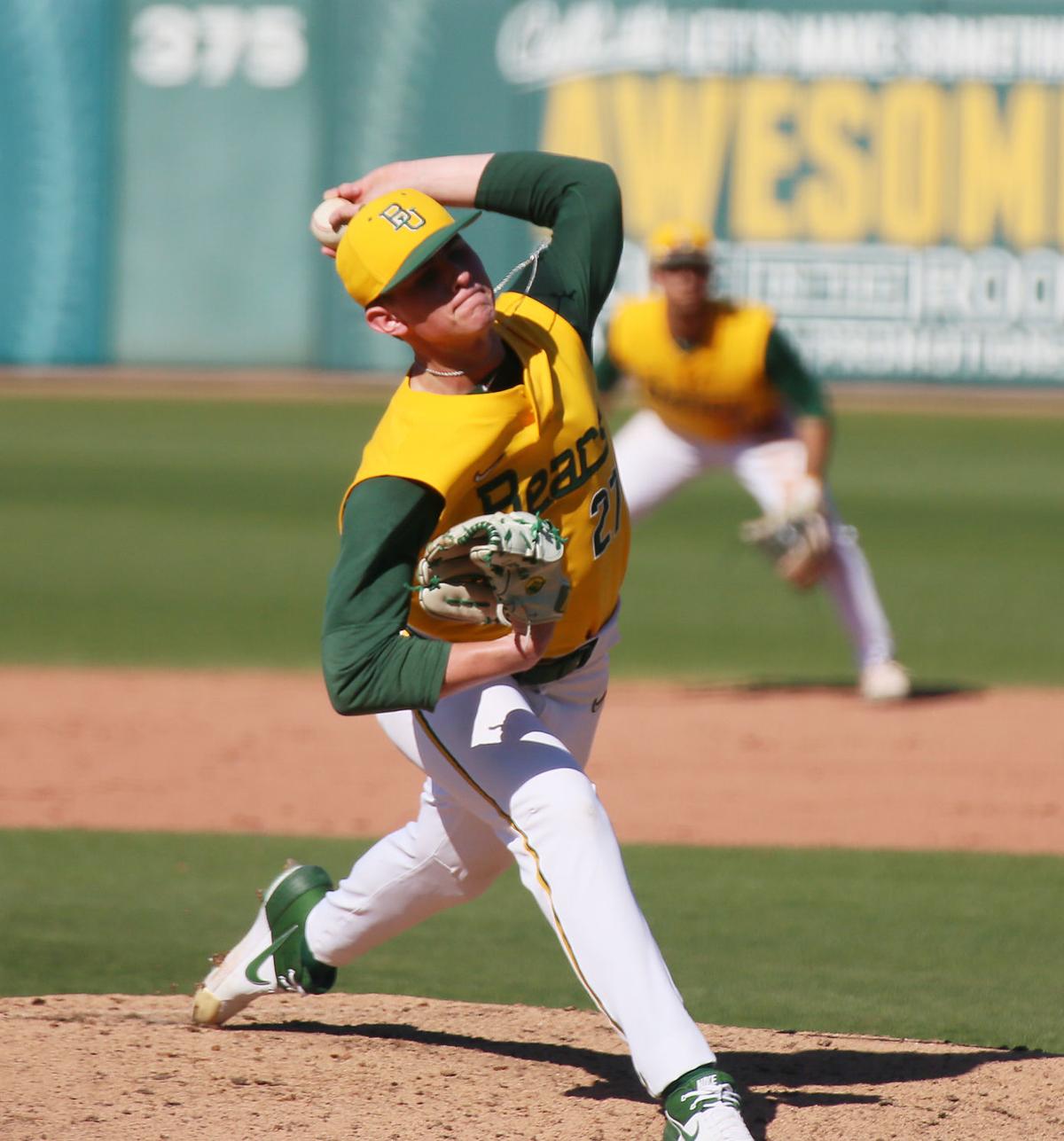 Baylor’s Hayden Kettler, on the mound against Nebraska, was the Bears’ first starting pitcher to earn a win this season.

Baylor outfielder Jared McKenzie connects for a two-RBI single in the sixth inning against Nebraska.

Baylor first baseman Chase Wehsener reacts to a double play in the sixth inning with the bases loaded against Nebraska. Nebraska’s Joe Acker, right, grounded out to third baseman Carlos Cardoza-Oquendo who tagged the bag and threw to first.

Baylor infielder Nick Loftin connects for a two-RBI triple against Nebraska in the third inning.

After Friday’s flat-faced stumble into the season, Baylor baseball coach Steve Rodriguez brought his team together and shared an anecdote from his first big-league game.

He told them that he’d been there. He understood first-day jitters. He’d experienced the jelly legs, the dry mouth, the pervading state of nervousness about wanting so desperately to do well. But that’s a one-time thing, Rodriguez said.

“They did a great job of adjusting. A lot of teams, you take a beating like we did on Friday and you kind of wear it the rest of the weekend. Our guys didn’t, and I’m pretty proud of them.”

As well he should. Baylor continued its resilient resurgence by shucking the Nebraska Cornhuskers, 7-2, in Sunday’s series finale at Baylor Ballpark. That gave the Bears (2-1) a win for a second straight day and the series triumph.

Senior right-hander Hayden Kettler became the first BU starting pitcher to register a win on the year. Kettler opened the day with a breezy 12-pitch first inning, and overcame a couple of hiccups in the second and third innings to tally a solid five-inning stint. Kettler recently tweaked some of his mechanics, changing his arm slot position on the advice of pitching coach Jon Strauss.

The pitcher couldn’t be happier with the results.

“I think it was two weeks ago, we made a very small adjustment in the bullpen, and I went out and threw that next weekend in an intrasquad and it felt like night and day,” said Kettler, who scattered six hits while striking out three and walking two. “The biggest thing for me is just trying to get back in that rhythm and be able to repeat my delivery and get the mechanics on the board. At the end of the day, I’ve got to thank Coach Strauss because that was something that he spotted that I didn’t even know about. It definitely came into play today.”

After an inning, it appeared as though a pitcher’s duel was imminent. Huskers left-hander Cade Povich came out dealing. He moved his pitches in and out effectively and had the Bears flailing, as five of the first six BU batters struck out.

But nothing in baseball lasts forever. In the third, Baylor grabbed the lead with a three-spot. BU newcomers Esteban Cardoza-Oquendo and Tre Richardson sparked the rally by banging out singles off Povich. Then with two outs, Jared McKenzie punched a crisp grounder to third that Nebraska’s Drew Gilin failed to field cleanly. As the ball dribbled over into foul territory, BU third base coach Mike Taylor waved around Cardoza-Oquendo to score from second.

Nick Loftin followed by lofting a towering fly to right. Nebraska’s Aaron Palensky gave chase, but the ball bounced in safely over his head for a two-run triple, pushing the Bears in front, 3-2.

The Bears upped their lead to 4-2 in the fifth. Richardson and fellow freshman Jared McKenzie both banged singles, chasing Povich (0-1) from the game. Richardson eventually zipped home from third on a wild pitch from Huskers reliever Bo Blessie.

A three-run sixth inning injected even more breathing room for the Bears. They loaded the bases on walks from Mack Mueller and Cardoza-Oquendo and a Ricky Martinez single. Richardson brought home one run with a sacrifice fly to right, and then McKenzie plated two more with a looping single into center.

Those newbies Richardson and McKenzie looked plenty comfortable in their introductory weekend to college baseball. They combined to go 11-for-22 with seven runs scored and five RBIs. McKenzie also covered a ton of ground chasing down fly balls in center field, including a pretty running catch near the warning track for the penultimate out of Sunday’s game.

Richardson technically should still be in high school, but the 18-year-old graduated from Houston Kingwood in December and enrolled at Baylor a semester early.

“It’s amazing. I don’t even have words for it,” Richardson said. “Friday, we came out and were doing all the little pregame stuff and I was getting yelled at by the coaches because I was kind of in awe. I just never experienced anything like this. We don’t play in front of this many people until the playoffs. So to come out in the home opener and you’ve got the home faithful behind you and stuff like that, that’s pretty exciting.”

Color Rodriguez impressed with what he’s seen from Richardson and McKenzie, who are hitting 1-2 in the batting order.

“They’re good athletes. They play baseball really well, and they understand the intricacies of the game at such a young age,” Rodriguez said. “For some kids, there could be a little bit of stage fright. They go out there and they don’t want to swing and don’t’ want to make mistakes. And I told them, I said, ‘Hey look, I don’t care about the mistakes. Just be aggressive. And as long as I can tell what you’re attempting to do, we’re going to be fine.’ I tell you what, they’re going to be fun to watch this year.”

Rodriguez was also pleased with how his hitters adjusted after struggling against Povich earlier in the game. Moreover, Baylor’s defense played flawlessly for the second straight day. The Bears turned three double plays on the day to neutralize Nebraska threats, and they all originated in different directions. Kettler escaped a jam with a 3-6-1 twin killing in the fifth, Cardoza-Oquendo helped out freshman reliever Evan Godwin by getting an unassisted force out at third and strong throw across the diamond to end the sixth, and an inning later Godwin started an inning-ending 1-6-3 double-dip.

“The biggest thing about having a defense like that is it makes your job easier,” Kettler said. “When you’re able to go out there and just pitch to contact and know the guys behind you are going to make plays, it takes a lot of stress off, a lot of pressure off. I think our guys did a great job today. There were three double plays. Anytime you can turn one double play in a game, that’s great. But to turn three, those are rally-killers. That’s unbelievable by our defense, and like I said it makes my job easier.”

Baylor will continue its eight-game homestand to open the season when it welcomes Arkansas Pine-Bluff at 6:30 p.m. Tuesday.