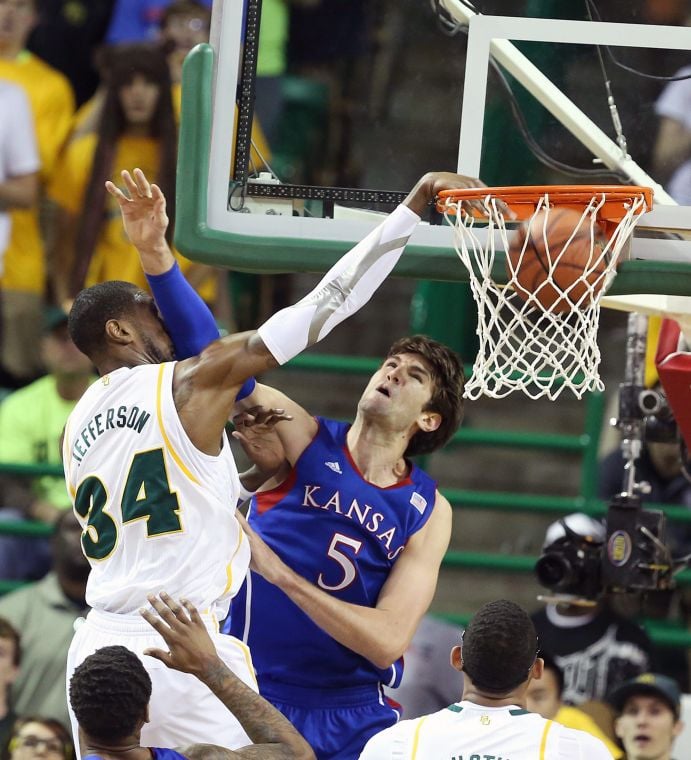 Baylor’s Cory Jefferson dunks over Kansas’ Jeff Withey in the first half. Jefferson scored 25 points to help the Bears upset the Big 12 co-champions. 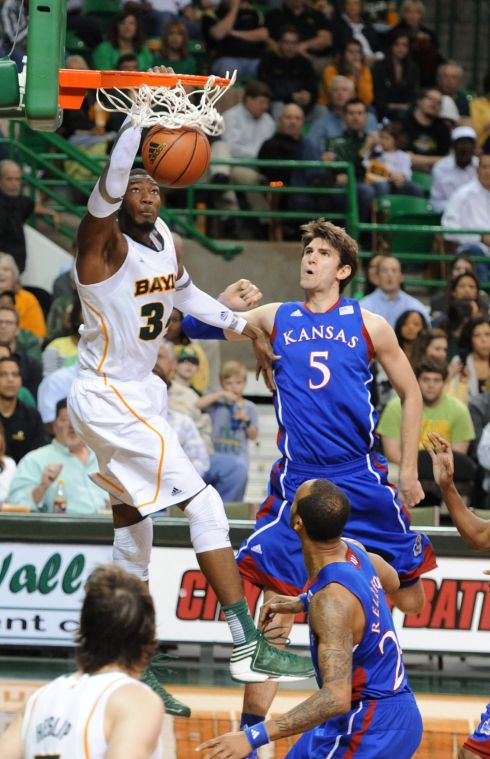 Baylor’s Cory Jefferson dunks over Kansas’ Jeff Withey in the first half. Jefferson scored 25 points to help the Bears upset the Big 12 co-champions.

Kansas still rules the Big 12, but Baylor didn’t bow down like one of the serfs in its kingdom on an emotionally charged senior night.

Playing its most inspired basketball of the season, Baylor stormed out of the tunnel with a sense of purpose it hadn’t shown all year.

The Bears didn’t just beat the No. 4 Jayhawks, they sent them back to Lawrence with their most lopsided loss of the season.

With Pierre Jackson collecting 28 points and Cory Jefferson scoring inside and outside for 25 points, the Bears ran roughshod over the No. 4 Jayhawks for an 81-58 blowout before a charged-up crowd of 9,695 Saturday night in the regular season finale at the Ferrell Center.

It was a stunning show of dominance for a Baylor team that has been erratic all season and still probably has to do some work next week in the Big 12 tournament to earn a NCAA tournament bid. But the Bears (18-13, 9-9) showed what they’re capable of doing when everything is working.

“We knew how big this game was,” Jackson said. “We haven’t been playing that good as a whole, and we knew that. But tonight, why not Kansas? It’s a great team. It’s a great time for us to prove a point that we’re a good team and we’re capable of making a deep run in the tournament like we did last year.”

The Bears have at least one vote for an NCAA tournament bid from Kansas coach Bill Self.

“Baylor needed this game based on what everybody said, and they got it,” Self said. “They deserve to be in the tournament and I think this will definitely put them in the field. They were terrific and had a lot to do with us not being very good. And of course two players played about as well as any two players against us in a long, long time.”

After Oklahoma State pulled off a 76-70 win over Kansas State earlier Saturday, the Jayhawks (26-5, 14-4) could have won the outright Big 12 title with a win over the Bears. But the Jayhawks had to settle for a co-championship, marking the ninth straight year that they’ve won or tied for the Big 12 title.

“We knew that we got a piece of it before we came over here,” Self said. “I thought we would play better because there would be no pressure, total freedom and confidence going out. But it didn’t work out that way for us. They just controlled the game from the start.”

Playing his final game at the Ferrell Center, Jackson delivered one of the best performances in his two seasons for the Bears as he buried 11 of 13 shots and collected 10 assists while often beating the Jayhawks downcourt with his unmatched speed.

But Jefferson looked like he was playing outside of his body as he matched his career high with 25 points on 11 of 13 field goals while scoring in a variety of ways. Nobody was surprised by his barrage of dunks, but he shocked everybody by nailing three 3-pointers after coming into the game 0-for-7 beyond the arc in his career.

“Cory was O-fer for his career and now I think we’ll have to design some plays for him to get him 3-point shots,” Baylor coach Scott Drew said. “Cory makes 3s in practice and works on them. (Jeff ) Withey is the best shot blocker in the nation and he backed off him. If you don’t go out and guard him, Cory is going to shoot the 3, and he was on fire.”

Jefferson, a fourth-year junior, was highly motivated after he went 0-for-6 and didn’t score in Baylor’s 61-44 loss to Kansas on Jan. 14 in Lawrence.

“Yes, that was one of the things, and my seniors,” Jefferson said. “I didn’t want to see them lose on senior night. That would have made things even worse.”

In his last home game, A.J. Walton finished with 12 points and five assists. When Drew pulled Walton and Jackson out of the game to a standing ovation for the final time with 46 seconds remaining, they both fell on the floor at midcourt and kissed the BU logo.

“I love everything about Baylor – students, teachers, everybody,” Walton said. “And this four years has been a great journey. I got a little emotional out there.”

One of the best defensive teams in the country couldn’t slow down a Baylor offense that shot 57.5 percent overall and buried six of 12 treys. The Bears played lockdown defense as they limited the normally explosive Jayhawks to 37.5 percent shooting while blocking seven shots, including four by Isaiah Austin and three by Jefferson.

The Bears looked like they were on a mission from the start as they bolted to a 10-4 lead as Jefferson sliced inside twice for slams. They kept pushing harder as Jackson and Jefferson drained treys to stretch the lead to 22-13 midway through the first half.

With Elijah Johnson hitting three shots and Ben McLemore nailing a trey, the Jayhawks cut Baylor’s lead to 30-28. But the Bears closed the first half with a 7-0 run that was finished off by Jefferson’s second 3-pointer from the top of the arc.

“We knew what was at stake,” Jackson said. “We handled business and did a great job of defending and rebounding. That’s all it takes to win games. We don’t have any problems scoring – we’ve got all the pieces to score. It’s just the defense, and we did that.”

Baylor continued to dominate in the second half as it raced to a 61-44 lead as Jefferson drilled his third trey and Brady Heslip and Jackson hit 3-pointers. But the Jayhawks had one run left in them as they reeled off 11 straight points to cut Baylor’s lead to 61-55 with 6:22 remaining.

Instead of folding against the nation’s No. 4 team, the Bears quickly reeled off nine straight points as Austin hit a left-handed hook shot and Jackson stole the ball from McLemore and scored. Jackson then fired a pass downcourt to Heslip for a layup before Walton closed the run with a short jumper to stretch Baylor’s lead to 70-55 with 3:18 remaining.

“It was a great shot by Isaiah and our crowd helped to keep us motivated,” Drew said. “We got several stops in a row and we were able to get out in transition because of that.”

The Bears never let up and punctuated the big win with Jackson’s slam and free throw that opened up a 79-56 lead with 1:48 remaining. Jackson took a few seconds to smile and look at the group of students in the Bear Pit after the spectacular play.

After the game, the students rushed the floor and everybody celebrated the biggest win of the season at the Ferrell Center. Seniors Jackson, Walton and Jacob Neubert were right in the middle of the elated throng.

Now the sixth-seeded Bears hope to carry the momentum into their Big 12 tournament opener against third-seeded Oklahoma State on Thursday night at 8:30 in Kansas City.

“We needed it and now you’ve just got to keep going,” Jackson said. “You really don’t have any other choice but to keep getting better and keep playing like we did tonight.”