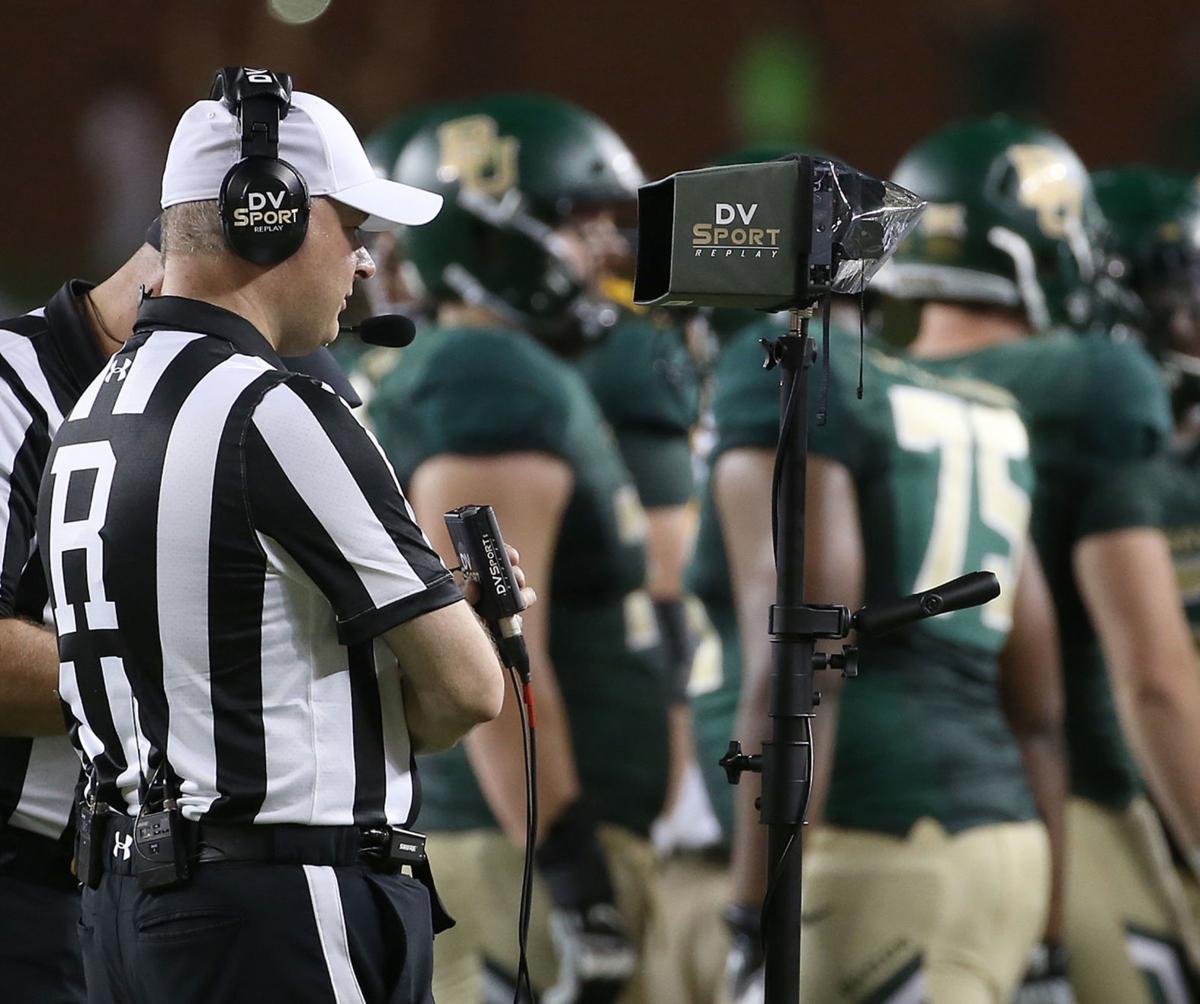 Officials review a play during the Baylor-Abilene Christian game, one of a reported 14 review stoppages in a game that lasted 3 hours, 59 minutes. 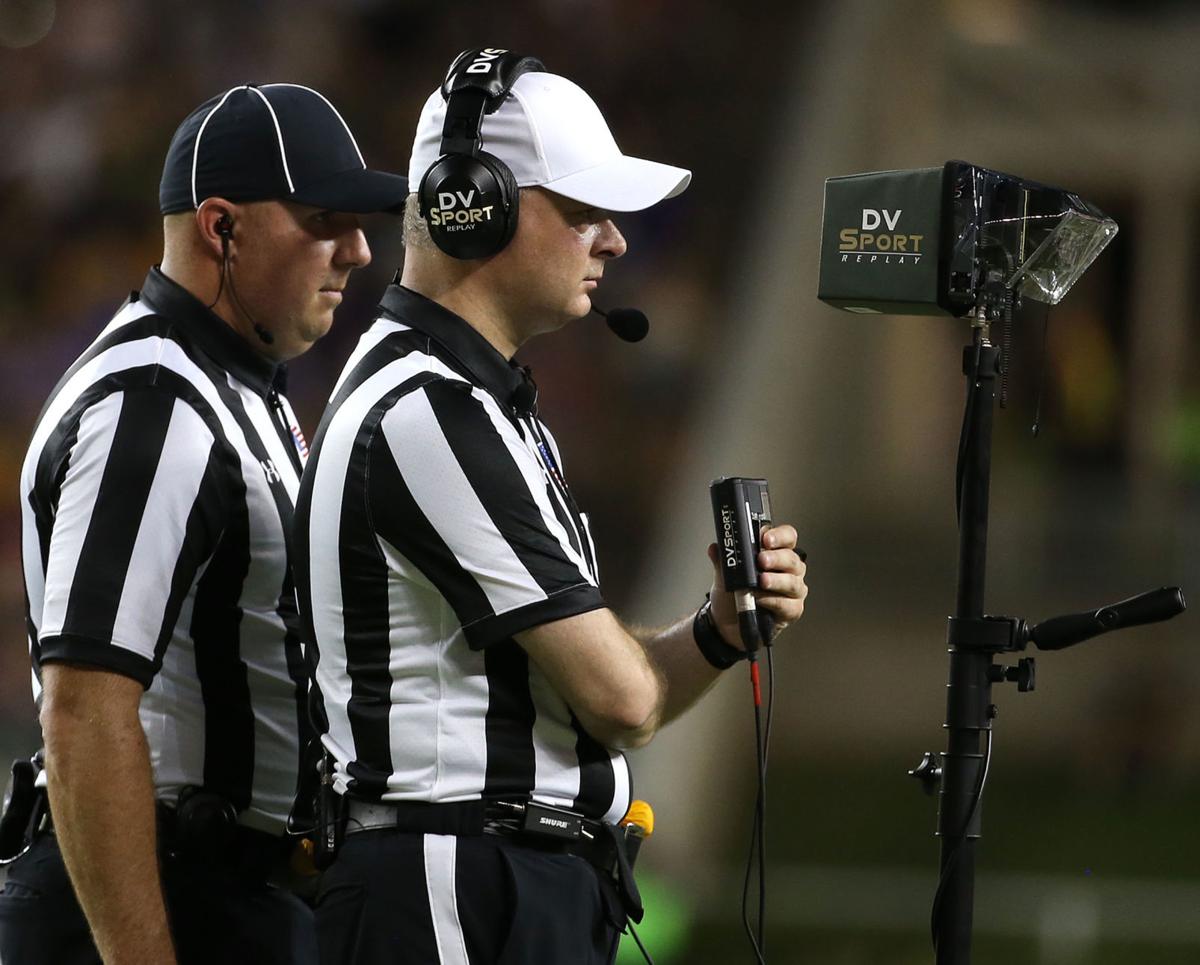 Officials review a play during the Baylor-Abilene Christian game, one of a reported 14 review stoppages in a game that lasted 3 hours, 59 minutes.

A lifelong rider of the Houston sports bandwagon and a lifelong hater of vegetables, Brice Cherry has been named Texas Sportswriter of the Year several times during his Tribune-Herald career, which began in 1998. He has been sports editor since 2012.

Sometime on Saturday night, I thought to myself, “Well, I guess I could just sleep here at the stadium tonight, then drive over to church from here.”

Attention — the previous sentence is under review. (Cue the Jeopardy music — dum-dum-dum-dum … twiddle your thumbs … go to the bathroom … organize your sock drawer … read War and Peace … grab a frosty beverage … drive to the store for more ice … go to the bathroom again … OK, we’re back.) After further review, the joke holds up fine.

Of course, the real joke is the interminable length of today’s college football games.

Baylor’s 55-27 opening win over Abilene Christian, which kicked at 7 p.m., lasted 3 hours and 59 minutes. (Hey, we got it in under four hours — woo-hoo!) Such marathons are hardly uncommon. Last year, Baylor’s average game time was 3 hours, 29 minutes — right about the national average, which has increased some 8-10 minutes over the past five years.

It’s not listed in the box score, and Lord knows I didn’t count, but I was told by several reliable sources in the press box that the BU-ACU game featured 14 separate booth reviews.

That’s insane. That’s way too many. And something needs to be done.

Let it be known that when it comes to instant replay, I’m an extremist. I don’t favor it at all, in any sport, in any situation. To me, flow of game is vastly more important than getting every single call right. I don’t mind the human element. We allow the coaches and players to make mistakes, but for some reason we criticize the officials for not recognizing what we personally could only see after multiple super slo-mo viewings. That’s an impossible standard.

Yet I realize that in the minority with this viewpoint. And just as there should be some obvious common-sense middle ground with an issue like, say, gun control — something in between “Let’s confiscate all the guns” and “Let’s arm everyone like Dodge City” — there is room for compromise with football replay.

One friend, a high school football official, suggested that replays should only occur after a score or a change of possession. Essentially, it’s the “big play” idea. Only the big plays get reviewed. And I’d be OK with that. It would shave some time away, and definitely improve game flow.

Longtime sportswriter Dave Campbell — one of the wisest football sages around — offered room for replay, but said it should be limited to just one review per half. Again, that’s a reasonable alternative. Imagine a game with a maximum of four reviews. Sounds refreshing, doesn’t it? Certainly beats the heck out of 14.

It got to the point on Saturday night where fans of both schools were booing every time the words, “The previous play is under further review” were uttered. Many fans left at halftime or in the third quarter — and not because the action on the field wasn’t compelling.

My buddy Mark was one of them. He’s a longtime Baylor fan, and his default spectator mode is to stick it out to the end. “I hope they realize that it’s not because we don’t support the team. It just takes too long,” he said.

Booth reviews aren’t the only hindrance to a quick, crisp game. Virtually every game of any significance is televised nowadays. That leads to a slew of TV timeouts, so the sponsors can get their just desserts.

It’s part of the game that’s not going away, but it can be tweaked, too. To me, there’s nothing sillier than the game officials and players standing around waiting for the TV official to signal that it’s OK to resume play. A better solution: Let’s give them a three-minute commercial block. At the end of that three minutes, we’re starting play — whether the cameras are ready or not.

After all, aren’t they supposed to be there for the game, not vice versa?

Coaches and players, naturally, have bigger fish to fry. They’re trying to win football games, and not concerned with how fast things are clicking along.

But it’s got to be frustrating for them at times, too. I asked Baylor coach Matt Rhule about the length of games following the Bears’ rout of ACU, couching the question with the acknowledgement that it’s not the top priority for them.

“You know, at this point I think we’re just kind of used to it now,” Rhule said. “This is my seventh year, sixth year as a head coach. I’m kind of used to it, TV timeouts and all that. They did some things to speed the game up. They are starting the ball quick after kickoff return. ... I know they’re working on all of that.”

Then he paused, and added, “Yeah, I think there’s a lot of little things that happened tonight that were probably a little different in terms of the reviews and things like that.”

It’s true that the NCAA has sought to address the sluggish game time problem. But — in a not-so-ironic twist — progress has crept along at a snail’s pace.

If they need ideas, I’ve got ’em aplenty. My colleague John Werner says that college games should shift to 12-minute quarters, like the high school game. I think many people would favor a shorter halftime. For college games, it’s 20 minutes, a full eight minutes longer than the NFL. (Please don’t follow the high school route in that regard, as UIL games feature an agonizingly-long 28-minute intermission, so both bands, both drill teams and both sets of cheerleaders can perform.)

Here’s another thought — the NCAA could adopt the NFL’s clock management rule regarding first downs. In college, a first down calls for a stoppage of the clock — in the NFL, it doesn’t. The pros get that one right.

Or how about using a “shot clock” for replays? Give the ref two minutes to figure out if the guy’s knee was down before he crossed the plane of the end zone. If he hasn’t made a determination by then, sorry, we’re moving on. The evidence was inconclusive.

Give me a little time, and I’ll come up with even more ideas.

Never mind, another game is starting. I’ve got all the time in the world.

How to get Baylor vs. UT-San Antonio on TV, radio

Jalan McClendon is a student of the Bible, so he would completely understand if someone told him he has the patience of Job.

Bears looking to get physical against UTSA

To simulate crowd noise at the Alamodome, Baylor coach Matt Rhule piped in music and other loud noises over the speakers during practice this week.