The only difference between the old playing surface at Floyd Casey Stadium and the new one at McLane is the new Big 12 Conference logo design. That’s because after an exhaustive search, just to make sure, Baylor officials decided the surface they were using was the best and fastest available.

From his record-setting offense that operates at a frenetic pace to a defense that has become more and more athletic every season, speed is the name of the game.

When Baylor University officials began to talk turf for McLane Stadium, it was a must to find the fastest track possible.

“That was the most important criteria for us,” athletic director Ian McCaw said. “Coach Briles is pleased with what we have, and it fits what we’re doing from a football standpoint. Hellas Construction has the fastest track around, and this team is certainly built for speed.”

Even though Baylor has a prior relationship with Hellas Construction, an Austin-based company, the university sent a couple of members from the athletic department on a statewide search for the perfect turf.

In the end, strength and conditioning coach Kaz Kazadi and assistant athletic director for football operations Collin Schillinglaw came back to Hellas, the company that installed the turfs at the Allison Indoor Practice Facility, which opened in 2009, and at Floyd Casey Stadium three years ago.

“(Those two) spent most of the time evaluating different turfs for speed, seams, safety and maintenance,” said Todd Pautlski, Baylor’s deputy athletic director. “They traveled around the state to see if we wanted to go with another manufacturer. They came back to Coach Briles and said, ‘This is what we like.’ ”

The turf at McLane Stadium looks nearly identical to what fans saw at Floyd Casey Stadium..

Baylor decided against any changes to its color scheme, sticking with gold end zones and Baylor written in green and the gold interlocking BU logo emblazoned at midfield.

The only change is the newly revised Big 12 logo, which appears in gold at both 25-yard-lines. All of the insignias on the field are trimmed in white.

“The Big 12 logos were provided by the conference,” said Brian Nicholson, Baylor’s vice president for facility, planning and construction. “You’ll see a similar look at the other Big 12 schools. … (With everything else), we just liked the way it looked. It’s similar to what we had at Floyd Casey Stadium and the Allison facility. We looked at a couple options, and we went with what we like.”

SMG, the company that will run the stadium’s events, has worked with Hellas Construction to ensure everything that goes in the foundation of the turf will allow it to keep its high quality through the games and events.

“We had some of the same events at Floyd Casey Stadium,” Nicholson said. “We had concerts on stage, we had high school football throughout the year. Obviously some equipment comes with the turf. We brush it, and we redistribute the rubber. We have a tractor with a groomer, and we’ll groom it after each event and get it ready for the next one.” 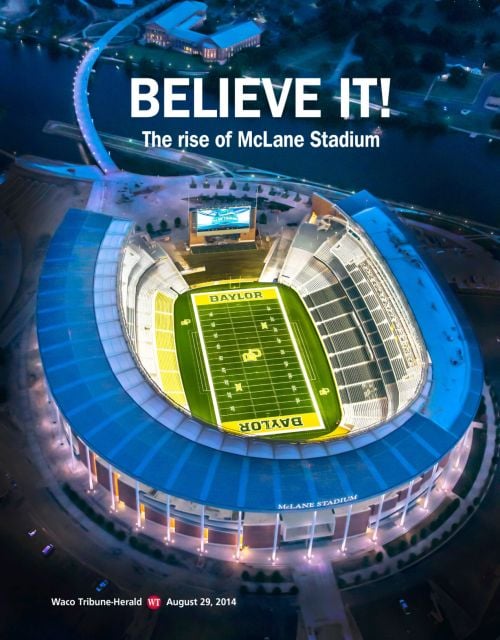 Stadium rising: The story of McLane Stadium, from start to finish

Baylor Line, old traditions not to be lost at McLane Stadium

Playing surface at McLane Stadium is fastest track out there

How McLane Stadium stacks up in the Big 12

McLane Stadium at a glance