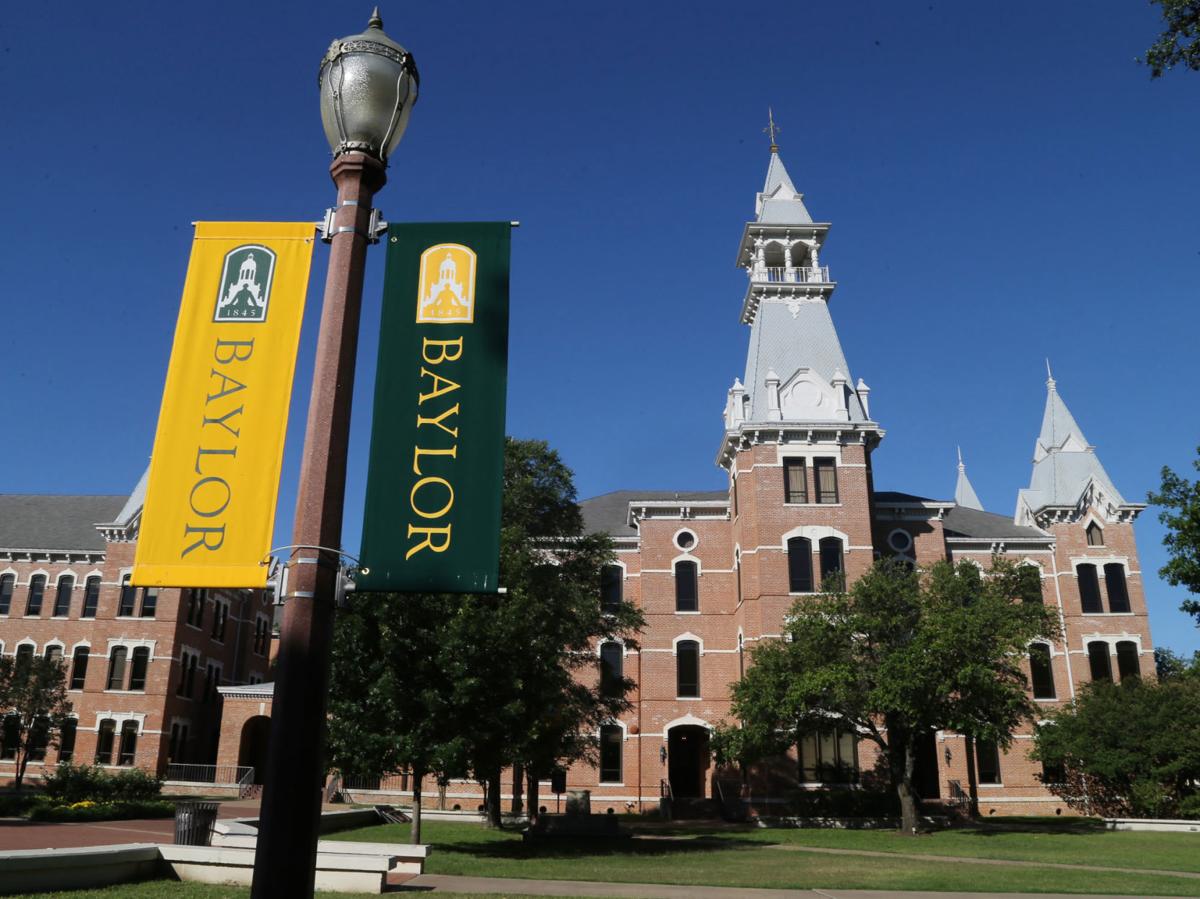 More than 3,000 Baylor professors, students, alumni and others with ties to the university signed an open letter this spring requesting the university recognize LGBT student groups for the first time. 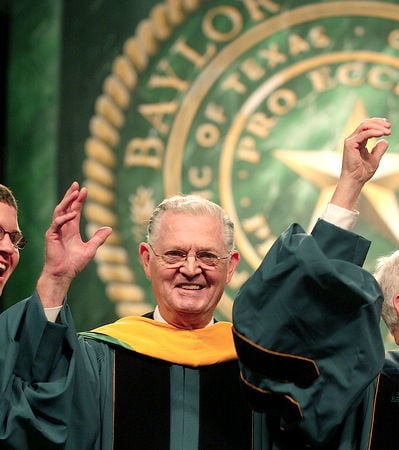 President Herb Reynolds tried to lead Baylor University away from fundamentalism in 1990, spearheading a change in the school charter to reduce outside influence on the selection of regents. 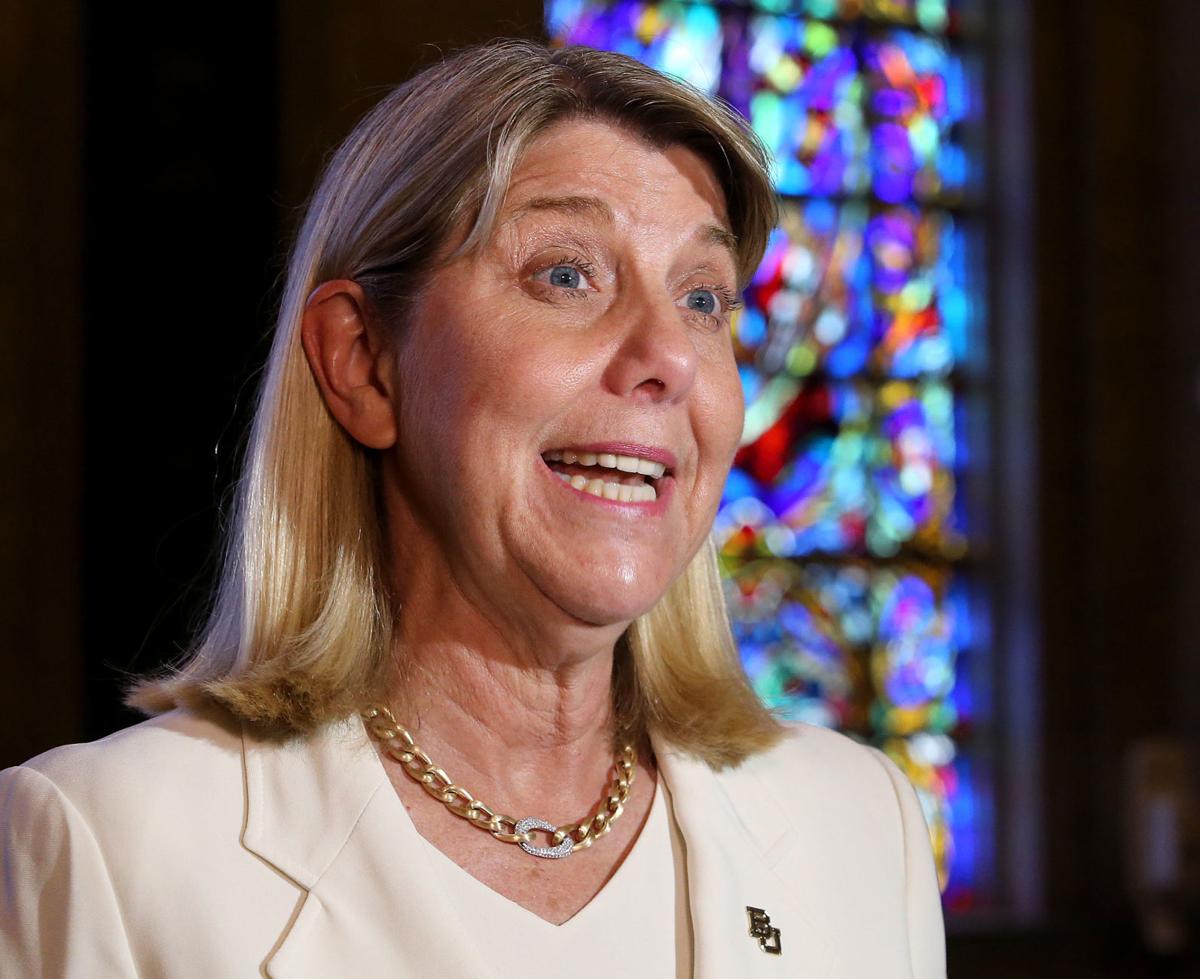 Regents made history in 2017 in selecting Linda Livingstone as Baylor University’s first woman president. She’s now in the midst of a $1.1 billion campaign to bolster Baylor’s national profile.

More than 3,000 Baylor professors, students, alumni and others with ties to the university signed an open letter this spring requesting the university recognize LGBT student groups for the first time.

President Herb Reynolds tried to lead Baylor University away from fundamentalism in 1990, spearheading a change in the school charter to reduce outside influence on the selection of regents.

Regents made history in 2017 in selecting Linda Livingstone as Baylor University’s first woman president. She’s now in the midst of a $1.1 billion campaign to bolster Baylor’s national profile.

Over the last several weeks, social media has been the scene of Twitter wars in the Southern Baptist Convention (SBC). When some Southern Baptists found out that Beth Moore, the most popular Bible teacher in SBC land, was preaching on Mother’s Day, all Hades broke loose. Al Mohler, the president of Southern Baptist Theological Seminary, said that surely God preferred the male voice in the pulpit.

Current Southern Baptist leaders began implementing restrictions on women’s roles in the church and home during the 1980s when they overthrew their moderate opponents and gained control of the SBC. The “Conservative Resurgence” (CR), so named by the victors, reminded women that they were the cause of sin in the Garden of Eden and refused to fund ministries of a church with a woman pastor.

Observers assumed it was only a matter of time before Southern Baptists developed a creedal statement to enshrine their victory. In 1998, the SBC passed an amendment to its 1963 Baptist Faith and Message, adding restrictive boundaries about proper family structure. The statement affirmed marriage between a man and a woman — thus opposing any tolerance of same-sex marriage — and also said wives should submit graciously to their husbands. Two years later, the Baptist Faith and Message 2000 (BFM 2000) was passed, crowning jewel of the CR. It was a logical conclusion for their creed to declare that women could not serve as senior pastors.

It is not hard for me to roll my eyes at some of this “straining at a gnat and swallowing a camel” religion I find on social media. Like many ex-Southern Baptists, I found a Baptist home elsewhere. I have experienced the blessing of two pastors (one currently) who are women since I’ve lived in the Waco area. My personal Christian-Baptist identity is not tied to the BFM 1998/2000.

Why be concerned about the Baptist Faith and Message 1998/2000? Here’s the rub: Baylor University selectively cites this document as its authoritative Baptist source to defend its position on human sexuality. But Baylor University is not a Southern Baptist school. It never has been.

Baylor University professors affirm faith in the Judeo-Christian tradition and support the school’s explicitly Christian mission. We do not sign creeds. We come from different kinds of churches (not just Baptist) and have different theological perspectives. Baylor has a Baptist tradition though it largely focuses on its broader Christian identity.

Still, Baylor’s Baptist identity is worth remembering. Baptist identity is diverse, but Baylor’s history reveals commitments to familiar Baptist principles: faith and freedom rooted in the Lordship of Jesus Christ, the authority of the Bible (and the freedom to interpret it communally and personally), freedom of conscience and shared governance (called democratic, congregational polity and priesthood of believers in church settings). That’s a mouthful, but freedom responsible to God and neighbor is at the heart of Baptist DNA.

I expect there are different views on women’s roles in the church on Baylor’s campus — but I am glad to say that my colleagues in the Department of Religion affirm women in all ministries. Both women and men teach students — female and male — about the Bible and spiritual matters. In other words, we, by intention and design, don’t fit the creedal conformity of the Baptist Faith and Message amended in 1998 and codified in 2000.

Baylor has long been affiliated with the autonomous Baptist General Convention of Texas (BGCT). The BGCT affirms the 1963 BFM without the 1998 Family Amendment. Unlike the SBC, the BGCT doesn’t exclude churches with senior pastors who are women. At the same time, like Southern Baptists, the BGCT excludes churches that affirm same-sex relationships. In doing so, however, the BGCT has not cited the Southern Baptist BFM 2000; tellingly, it developed its own resolutions of exclusion.

Whatever one thinks of the BGCT’s inclusion/exclusion practices, it should be remembered that Baylor’s relationship with the BGCT drastically changed in 1990 when President Herbert Reynolds led the school to change its charter. He stated his reasons clearly. He did not want Southern Baptist fundamentalists (the word he used) to take over Baylor University. He disliked the galloping creedalism and the oligarchy of power in the SBC and he worried the BGCT was vulnerable to fundamentalist inroads. As a result of the charter change, Texas Baptists’ selection of regents was sharply reduced (100 percent to 25 percent) and, in effect, Baylor selects its own self-perpetuating board. Baylor’s relationship to the BGCT is not what it once was.

In 2015, the Supreme Court affirmed same-sex marriage. The national conversation on LGBTQ rights had been in high gear for a while. In 2013, Baylor’s student government passed a resolution requesting the student “sexual misconduct policy” remove “homosexual acts” from a list of prohibited behaviors (which included sexual assault, incest and adultery) and replace it with “deviate sexual intercourse.” The student president vetoed the change.

In May 2015, just weeks before the Supreme Court’s same-sex ruling, Baylor changed its misconduct policy to a “sexual conduct policy.” The process of revision began in 2013, though it was not related to student efforts to modify the policy, the university said. Rather, it was an attempt to use language more appropriate for Baylor’s identity as a “caring community.” The new policy reads, “physical sexual intimacy is to be expressed in the context of marital fidelity.”

Baylor officials added another reason for the revision: They wanted to ensure they had policies and processes for any future legal and ethical obligations. To establish this legal framework, Baylor told news outlets that the new policy would be interpreted “in a manner consistent” with the 1963 BFM amended in 1998 (with its statement on family hierarchy and rejection of same-sex relationships).

The university’s current sexual conduct policy (which is being used to support the university’s student life policy that prohibits LGBTQ groups from being officially recognized on campus) states that it will be interpreted “in a manner consistent with the Baptist Faith and Message of 1963.” The policy makes no mention of the 1998 amendment. It essentially takes an archival memory or extremely heavy investment in all things Baptist to recall that in 2015 school officials acknowledged they were using the 1998 amendment. That is only part of the point here. In Baptist circles, when people mention any use of the BFM, they specify either the 1963 or 2000 version.

To my knowledge, Baylor is the only place that tries to use the BFM with the 1998 family amendment rather than the BFM 1963 or the BFM 2000.

In the attempt to handle a problem, decision-makers created another. Baylor cherry-picked a document to find a statement on marriage, but that same document also says women should submit graciously to their husbands. Again, anyone with knowledge of recent Baptist history knows the 1998 amendment is a core agenda piece in the BFM 2000 creed which capped its restrictive views on women by asserting that a senior pastor could only be male. Said another way, to cite the 1998 amendment on marriage is to invite observers to connect you to the 2000 capstone document.

Baylor’s appeal to the BFM is fraught with problems. Southern Baptist leaders claim that their creed only restricts women in the home and the church. Women can lead in the political realm (so it was OK to vote for Sarah Palin). But such a compartmentalized reading of the Christian life is an Achilles heel. At a university where the integration of faith and learning is paramount, where Christian faith is found all over campus, are we really suggesting that a president, a provost and a Board of Regents chair — all obviously highly qualified women — are not participating in spiritual, vocational leadership? Yet, we are citing a creed from which we distanced ourselves long ago.

This op-ed is not written with the expectation that Baylor will change its policy on sexuality. Sure, I think that Baylor could affirm its position and at the same time provide safe space for an LGBTQ student group. As others have compellingly written, if Baylor can affirm the existence of a student Republican group and a student Democrat group, and can allow controversial figures such as Matt Walsh on campus to speak, then the university has already provided safe space to groups on campus without affirming their various positions.

Why be concerned about how we cite recent Southern Baptist documents? Because we know better. We know we are cherry-picking a creed — the same creed that fundamentally opposes women students on our campus studying for the ministry, the same creed that opposes faculty who affirm full equality for men and women, the same creed that doesn’t even attempt to understand or discern sexual orientation but simply classifies those who identify as LGBTQ as immoral, and the same creed, if we really believe in integration of our faith and learning, that cannot be followed and still affirm our president, provost and board chair. We know better.

Doug Weaver is a professor of Baptist studies.