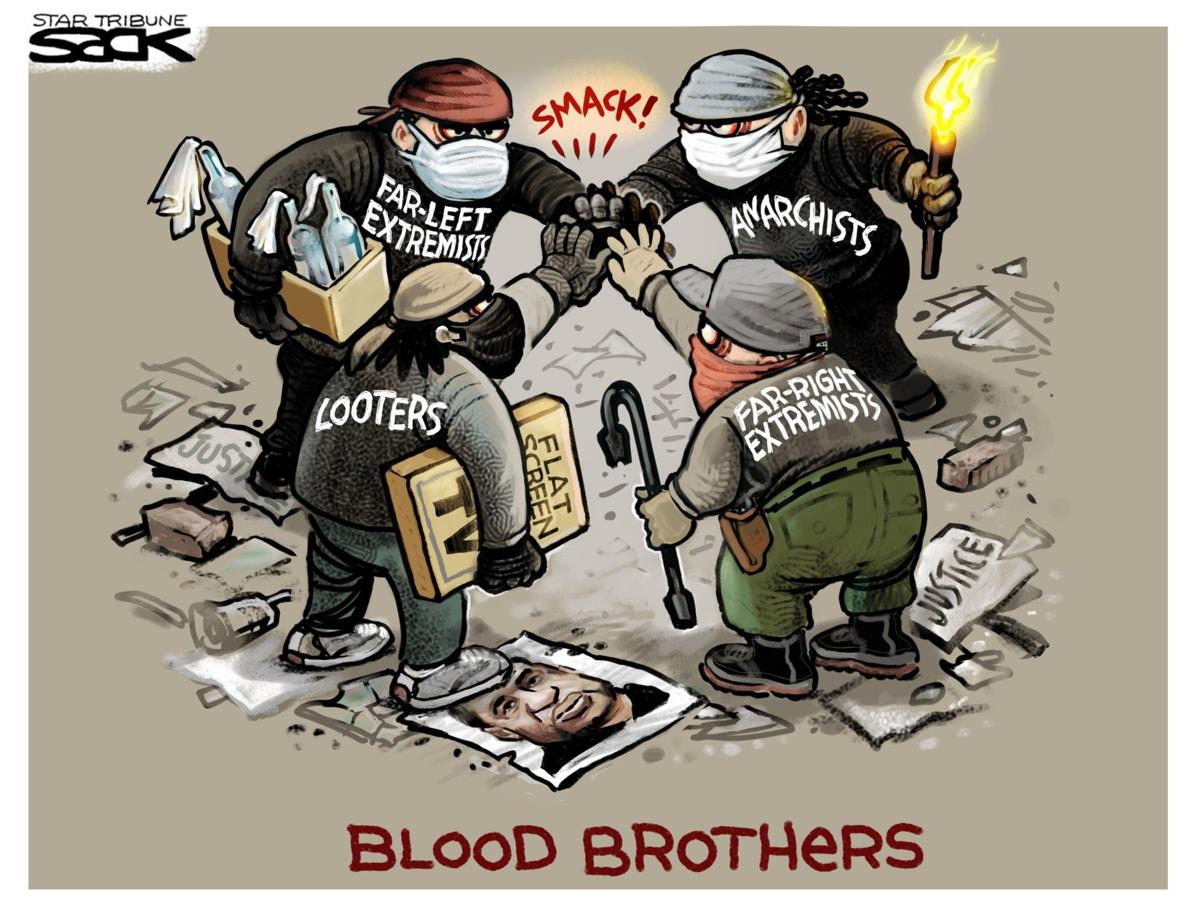 A person holds a sign as a Wendy's restaurant burns Saturday, June 13, 2020, in Atlanta after demonstrators set it on fire. Demonstrators were protesting the death of Rayshard Brooks, a black man who was shot and killed by Atlanta police Friday evening following a struggle in the Wendy's drive-thru line. (Ben GrayAtlanta Journal-Constitution via AP)

A person holds a sign as a Wendy's restaurant burns Saturday, June 13, 2020, in Atlanta after demonstrators set it on fire. Demonstrators were protesting the death of Rayshard Brooks, a black man who was shot and killed by Atlanta police Friday evening following a struggle in the Wendy's drive-thru line. (Ben GrayAtlanta Journal-Constitution via AP)

I start by saying what should be self-evident: Neither I nor anyone with whom I would willingly associate approve of the events or circumstances that have led to the current unrest nationwide, nor do I want anything other than justice for that situation and the victims thereof — emphasis on justice. I also declare how proud I am of our community (unlike those elsewhere in the country) in its measured, positive reactions to current events.

However, I see a cult of reaction that has arisen in some quarters over the past couple of weeks that has gone too far. I’m not referring to or condemning those who peacefully protest. I applaud them. And I applaud those principled protesters who, as I do here, condemn those who disgrace the movement through violence and destruction so cruelly indifferent to the lives of innocents. Even so, it seems as if their and like voices are oftentimes drowned out in the public’s focus on the violence. Ironically, some luckless individuals are victims not only of the riots and looting but of the “systemic racism” being protested. I strongly condemn also those who, if only by somehow championing or excusing such “reactions” (riots, killings and looting) — behavior that could never be just in any circumstance — ultimately discredit and steal the needed focus away from the rightful and just cause of the protesters.

I marveled at a social-media post to the effect there “can be no overreaction to 400 years of second-class citizenship.” I cannot disagree more. Reading this was a tipping point for me in speaking out. Anyone who seeks a society like that now sought by rightful protesters (and most of us, I hope) should abhor any praising of the unbridled “reactions“ inherent in riots, killings and looting. Such is no different than saying “there can be no overreaction” to any murder, event or pattern of historic wrongs — including the “reaction” of indiscriminately killing, injuring and rendering homeless and without livelihood numerous people who had absolutely nothing to do with the event or its root causes.

Yet this is exactly what some defend in recent days. Would anyone reading this defend sending even a single person to death row or to prison for a murder that he or she did not commit and had no role in causing? I hope not! In fact, whenever this is found to have happened, there is great outcry and demands for reform (often granted), as well there should be. Yet the lives and/or livelihoods of scores of 100%-innocent victims have been taken recently in what some defend as a “just” reaction to the current outrage and to past injustices.

In many cases, these victims are the ones who worked, survived and even thrived against the headwinds of the very racism now being protested. Try telling the noble black family, for example, who spent their lives building a business burned to the ground in recent riots that such destruction was just or somehow not “an overreaction.” If you have any conscience or decency whatsoever, try telling anyone, in any circumstance, who is punished for something that he or she did not do or have any part in causing, that such punishment is “right” or “just” or “justified” in the society that you want. Yet this is precisely what you do if you in any way defend or overlook the rioting, killing and looting of recent weeks (again, as opposed to rightful protests such as we’ve seen locally).

Consider the everyday employees and management of the torched Wendy’s restaurant in Atlanta where a 27-year-old black man was fatally shot by police. Whatever Rayshard Brooks did or didn’t do, whatever Atlanta law enforcement did or didn’t do, the only crime involving those actually working at Wendy’s was innocently trying to address the problem of someone reportedly falling asleep in the fast-food restaurant’s drive-through lane. Not only was the restaurant set ablaze the following night but firefighters trying to extinguish the fire suffered the indignity of seeing rocks and bricks hurled at them by at least some of the protesters. This prevented firefighters from getting into the parking lot and extinguishing the blaze before it wholly consumed and destroyed the business, along with some livelihoods. So where do those Wendy’s employees go now? And will Wendy’s reinvest in this neighborhood?

I continue reading and hearing that “the police“ are “brutal,” “racists” and worse. Someone explain how such a broad-brush recrimination of those — 99% of whom have done nothing but protect and serve us all and make society livable — is any different than saying that any and all members of any identifiable group are somehow evil and ripe for punishment, not for what they’ve done but simply based on who they are. Sound familiar? It should — it’s called discrimination.

If such a proposition doesn’t offend you to your core, then you have little in common with true, principle-driven protesters. If anyone reading this somehow thinks that the rioting, killing and looting is somehow a “just“ reaction to the event in Minneapolis or to any larger-scale tragedies throughout history, perhaps the following will shake you from your delirium: Consider if mobs pressing a cause equally important to you burn down your home, steal your livelihood, perhaps take the life of a loved one. Even were you to claim a willingness to sacrifice all this for the cause, let me assure you: If such continues, the American people will shift focus from the cause so important to you to the innocence of others lost in the uproar and any accompanying violence. Is this what we want?

I want everyone to thrive. I want fairness for everyone. I want justice when wrongs are done. I want reform where needed. I want a society where there is no fear of either indiscriminately or because of some intrinsic personal characteristics being hurt or killed or plundered. I want a society where one is punished only for what he or she has wrongfully done, not for who he or she merely is. Everything I say above is in championing that. And don’t label me a “racist” for that, as some in a knee-jerk reaction no doubt would — I’m not.

David Henry is a patent attorney and litigator with the Gray Reed law firm and focuses on handling a wide variety of patent, trademark, trade secret and copyright matters, ranging from enforcement and defense of rights in litigation to strategic planning, prosecution, registration and licensing. He has served as a patent law professor at Baylor Law School since 1994 and also teaches in the Entrepreneurship Program of Baylor’s Hankamer School of Business.