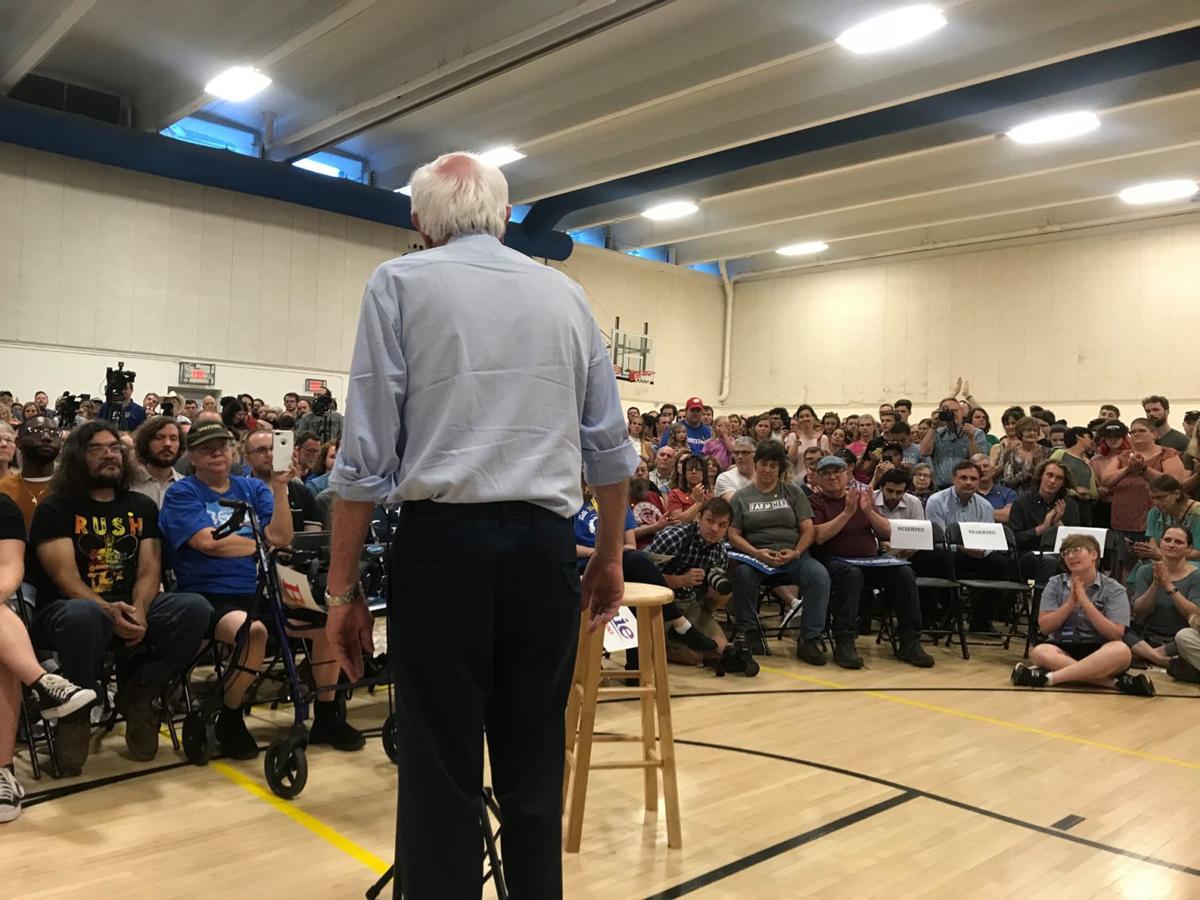 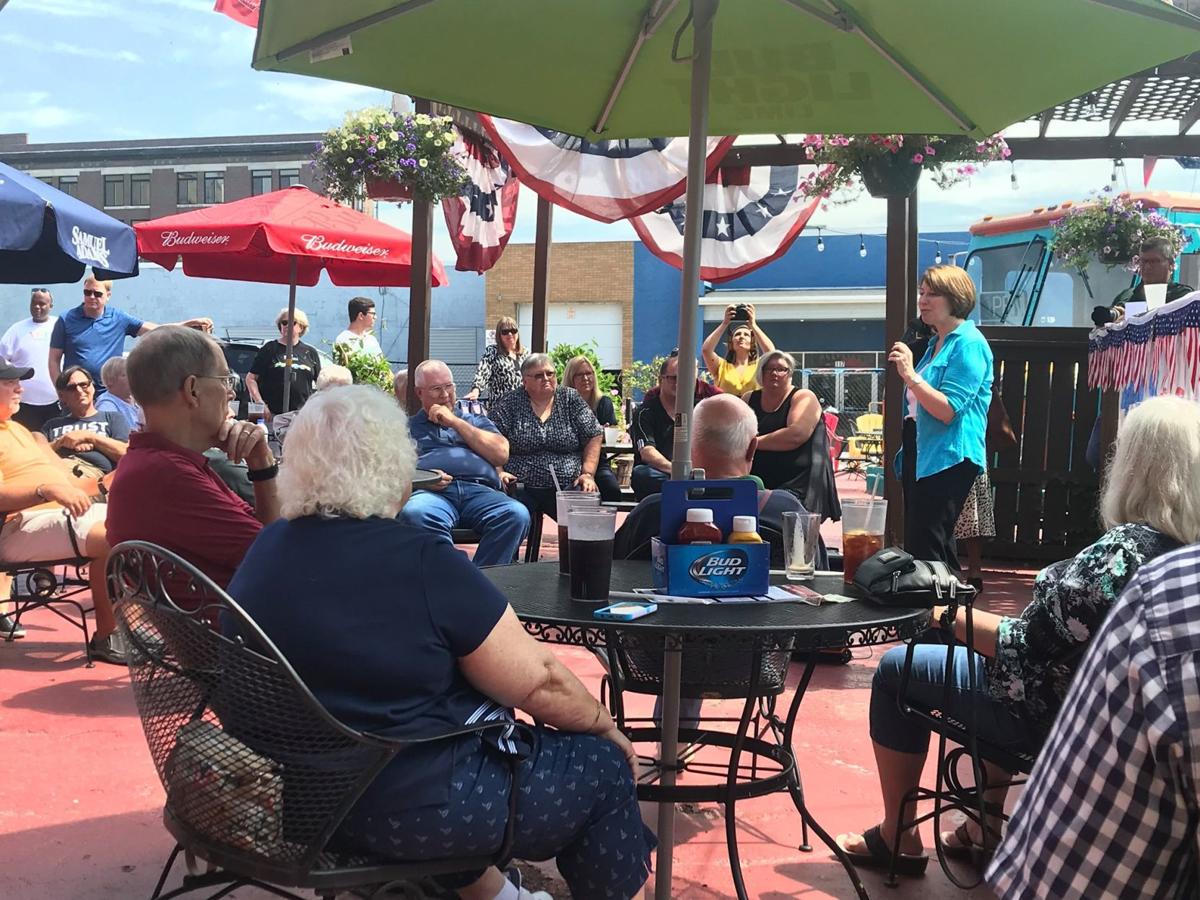 Sen. Amy Klobuchar in Muscatine on governing with integrity: “ I pledge to you, I will not just run this campaign with integrity, making promises that I can keep, but I will also govern with integrity and I will govern for you.”

Sen. Amy Klobuchar in Muscatine on governing with integrity: “ I pledge to you, I will not just run this campaign with integrity, making promises that I can keep, but I will also govern with integrity and I will govern for you.”

Moving from Waco to Minnesota has involved some adjustments. It’s surprising how many different winter coats one needs here, and there’s the troubling existence of the “walleye fajita” at what passes for Mexican restaurants. Among the benefits, though, is close proximity to a quintessential American process: presidential candidates campaigning in Iowa.

With a few days free and a tank full of gas, I headed south on the week of the Fourth of July. Candidates — all of them Democrats this time around — were flooding into Iowa. Tradition grants Iowa first dibs at primary voting in the form of caucuses, and the state plays an outsized role in the winnowing of the political field every four years. Along with the second state in line, New Hampshire, the rural nature of the place drives candidates out into small-town cafes and community gyms to do the kind of retail politics we don’t often see in the digital age. Problematically, these two states don’t come close to reflecting the diversity of our country, but tradition has cemented their place in our politics.

My plan was simple: I was going to go to an “ice cream social” hosted by Bernie Sanders on Tuesday night in Iowa City, then to a small-town appearance by Amy Klobuchar the next day.

Iowa City is about the most cosmopolitan place in Iowa. The home of the University of Iowa and a large (for Iowa) community of artists and writers, it nestles into gentle hills in the eastern part of the state. On a warm day in early July, the downtown streets are full of people walking and eating outside at cafes. I got there before Bernie did — his flight from Chicago was delayed, so he had rented a car and driven there with an aide. True or not, I kind of savored the image of this crusty Vermonter at the wheel of a rented Toyota Corolla, tooling along Interstate 88.

His ice cream social was staged in a basement gym in a community center. Tubs of Ben and Jerry’s Ice Cream were lined up and friendly volunteers were generous in their scooping. I killed time while we waited for Bernie by consuming a giant mound of Cherry Garcia and chatting with the two local teachers sitting beside me behind the makeshift stage. They were all-in for Bernie, though one of them worried that her Trump-loving father would spot her on television at the event.

About a half-hour late, Bernie blew into the gym, waving off the union rep who was introducing him. He looked like... well, like a guy who had just driven three and a half hours in a Toyota Corolla to be there. Once he started in on his stump speech, the fireworks began.

Few people in the country are as good as Sanders at describing the things that Democrats (or any politician) should care about: the difficulties of working people in affording health care, the struggles of young people as they try to pay off college debts, the effects of climate change. Bernie in person is exactly what you would expect: an arm-waving socialist totally committed to the cause. The audience ate it all up as eagerly as they had devoured the Cherry Garcia. There were cries of affirmation as he launched into an attack on Trump tax cuts. People jumped from their seats when he lambasted Trump education policy. By the time he was wrapping up, the crowd seemed ready to storm the ramparts and it was downright sweaty in the gym.

Of course, some of his ideas were terrible. Paying off everyone’s student loans would, as Sanders himself admitted in his speech, cost over two trillion dollars. For a nation so deeply in debt, that would be a troubling move. I wasn’t going to mention that to the now-frenzied teachers sitting next to me, though.

The next day I drove out to Muscatine, a quiet town hard by the Mississippi River. Minnesota Senator Amy Klobuchar was having her campaign event on the back porch of a small brewpub. I got there a little early and got a seat at a worn picnic table about 15 feet from the tiny amplifier that was set up for her. Things were pretty casual: I ordered an iced tea and chatted with a guy who had shown up because he was curious about Klobuchar and “not much happens in Muscatine.” Right on time, the senator came in with her husband John, who joined us at the picnic table, squeezing in between me and the local.

While Sanders had been intense and even angry, Klobuchar was comfortable, funny and smart. She gave a version of her stump speech but adapted to the friendly and very Midwestern group. Behind her, a train rumbled by and she paused to let it pass before talking about the effects of transport monopolies. She recognized the problem of college costs, but instead of making all public colleges free, she suggested doubling the amount of Pell grants while making community colleges free. The sensible people at the picnic tables didn’t roar in approval as I had seen the night before, but they nodded in agreement under seed-company hats the way that gentle people in this part of the world often do.

After another train rumbled along the river, a man raised his hand with a question. He was a chaplain in the Navy Reserve and dealt with many people struggling with their own opioid abuse or addiction in their family. Klobuchar took his question straight on and talked about some of the work she has already done and how much is left to do. She promised hard work, not a revolution.

Another town awaited them, so Sen. Klobuchar, her husband, an aide and a cooler were packed into a little SUV parked just outside the patio. Before she left, though, Klobuchar sought out the Navy chaplain. I don’t know what she said, but there seemed to be kindness in it.

Our politics are so often framed by television, money and social media that it’s easy to forget that there is this, too: A man troubled by his work, talking in the July sun on the porch of a brewpub to someone who wants to be his president. As I walked back to my car and drove through the quiet streets of Muscatine, I was thankful for that, and for this country.

Mark Osler is the Robert and Marion Short Professor of Law at the University of St. Thomas in Minnesota. He taught at Baylor Law School from 2000-2010.