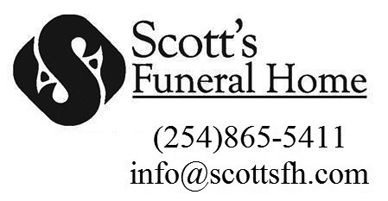 Graveside services with the Rev. Bob Phillips and Marine Corp Military Honors will be held at 10:30 a.m., Saturday, June 27, at Davidson Cemetery, near the Mound community on FM 1829.

Rex was born May 9, 1925, in the Seattle community of Coryell County, now part of Ft. Hood, to the late John R. Lee and Etta Farris Lee. He married Alta Sanders. They raised two sons, Mike and Mark. Rex served in the Marine Corp. during World War II from 1943 to 1945. His listed combat missions were Marianas Islands, Saipan, Tinian, Okinawa, Heyashima, Nagasaki, Isehiya, Kumamoto and Hitoyoshi. He went to Tinian to guard a top-secret plane "The Enola Gay" where Marines were arm to arm around the plane. He didn't know why, but as all Marines do, "he followed orders". Next, he went to Nagasaki Mainland, Japan, for a peacekeeping mission. He guarded a girl's school. He said God sent him to that assignment. After fighting the Imperial Japanese Army for two years, he realized they are just people. This helped heal his internal anger. He earned a field promotion and many medals, including a Purple Heart. He worked for the Southern Pacific Railroad and retired after 35 years of service. Above all, Rex loved his family. Rex was a farmer, rancher, hunter and loved fishing, which he enjoyed with his sons.

He was preceded in death by his parents, John Raby and Ettie R. Farris Lee; brothers, Ray Lee and Joe Lee.

In lieu of flowers, the family encourages that memorials be made to Davidson Cemetery Assn., c/o Carolyn Blakely, 1502 FM 1829, Gatesville, TX 76528.