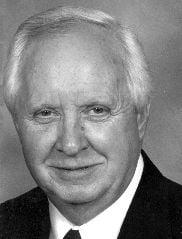 John Charles Graves of Lorena passed away at the age of 83.

"He had a servant's heart". Born at home in Hubbard, Texas, to James Howlett Graves and Annie Laura Moser. He grew up in Bellmead, Texas, and attended LaVega schools (grades 1 to 12). At the age of 13, his first job was working as a "soda jerk" at Green's Pharmacy. In 1955, following his high school graduation, John joined the United States Air Force proudly serving for 5 and a half years until 1961. He returned home and started working at General Tire & Rubber Company. In 1962, he married Linda Webb. Two years later, he became a father to their only daughter, Laura-Lee, while attending McLennan Community College and Baylor University. He worked at General Tire for 26 years until they closed. From there he worked at Hercules Aerospace until they closed. Then he worked at Spenco Corp., then L-3 Technologies followed by Time Manufacturing until retirement. Throughout his entire working career, he had "Perfect Attendance", attributing his good health to a Big Red and peanut butter crackers every day at 10:00 a.m. John never went anywhere that he didn't see an old friend to stop and visit with. He had a heart of gold.

In 1994, he and Linda purchased a historical bank building in Lorena, Texas, to live upstairs and have Just For You...Antiques & Interiors below. While working at Hercules he was moving furniture in the evenings, mowing all over Old Town, serving on the Chamber of Commerce and as an Alderman of the Lorena City Council for 8 years.

John was a member of Crestview Church of Christ where he served as a Deacon, captain of a very successful bus ministry and pitched for their men's slow-pitch softball team for many years. He and Linda also played on their mixed league volleyball team. A man to be remembered as the sweetest husband, father, grandfather and great-grandfather, AKA "Poppy". He treasured his family…and then he rested as Parkinson's and Dementia engulfed his life.

He worked hard, served faithfully and was loved by many. There will be no services per John's request. Thanks for the memories…you made a difference.

The guest book is offered at www.gracegardensfuneralhome.com. Through this site, you are encouraged to leave a fond memory or condolence about John.

To plant a tree in memory of John Graves as a living tribute, please visit Tribute Store.
+1
Plant a tree
+1

Johnny was a really good guy and his wife, Linda, was his pride and joy. Yes, Linda, he told me that at the last LaVega Class of 1960 reunion. Linda was in my Class of 1960 at LaVega. Everyday or so lately I read about my old friends passing away. Just the other day Skip Cox (Baylor) and Bill Polk (Czech Stop) said goodbye. Durn, I will miss them. Earth is less now but Heaven is better with it new residents. Thank God, Jesus Christ & the Holy Spirit for salvation and eternal life for believers. Johnny, Bill and Skip were certainly believers. I am so blessed to have known them. Harley Spoon