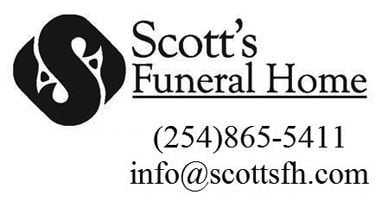 Benny F. Blanchard, 89, of Gatesville, peacefully passed from this earth into the arms of our Heavenly Father, surrounded by his family on Saturday, June 8, 2019.

Funeral services will be held at 2:00 p.m., Thursday, June 13, 2019, at Scott's Funeral Home Chapel, with Pastor Matt Richard officiating. Burial with Masonic Rites, will follow at Restland Cemetery. Visitation will be held from 5:00 to 7:00 p.m., Wednesday, June 12, at the funeral home.

Benny was born October 19, 1929, in the Leon Junction community, to the late John A. and Nora Duncan Blanchard. He attended school in Leon Junction through 8th grade and then attended Gatesville schools, graduating from Gatesville High School in 1948. He married Peggy Hamilton on June 3, 1950. He served in the Texas Army National Guard, from 1956 to 1961, until his unit was mobilized for active duty in Ft. Polk, Louisiana, during the Cuban Missile Crisis. He was honorably discharged in 1962. He was a civil service employee for the Department of the Army as a construction inspector, retiring after 35 years of service. He was a Deacon and member of Eastwood Baptist Church and Gatesville Masonic Lodge #197 A.F. & A.M.

Memorials may be made to Eastwood Baptist Church, 2518 Main Street, Gatesville, TX 76528.

To plant a tree in memory of Benny Blanchard as a living tribute, please visit Tribute Store.

My prayers and sympathy are extended to the family and loved ones of Mr. Blanchard. Keep your faith in the resurrection promised at John 5:28, 29. Soon God will put an end to all sickness, sorrow and pain. He will also do away with our enemy death as promised at 1 Corinthians 15:26. Pray for God's kingdom to come as Jesus taught us to do. Please be comforted by the words expressed at Revelation 21:3, 4. Remember: God keeps His promises and it is impossible for God to lie!