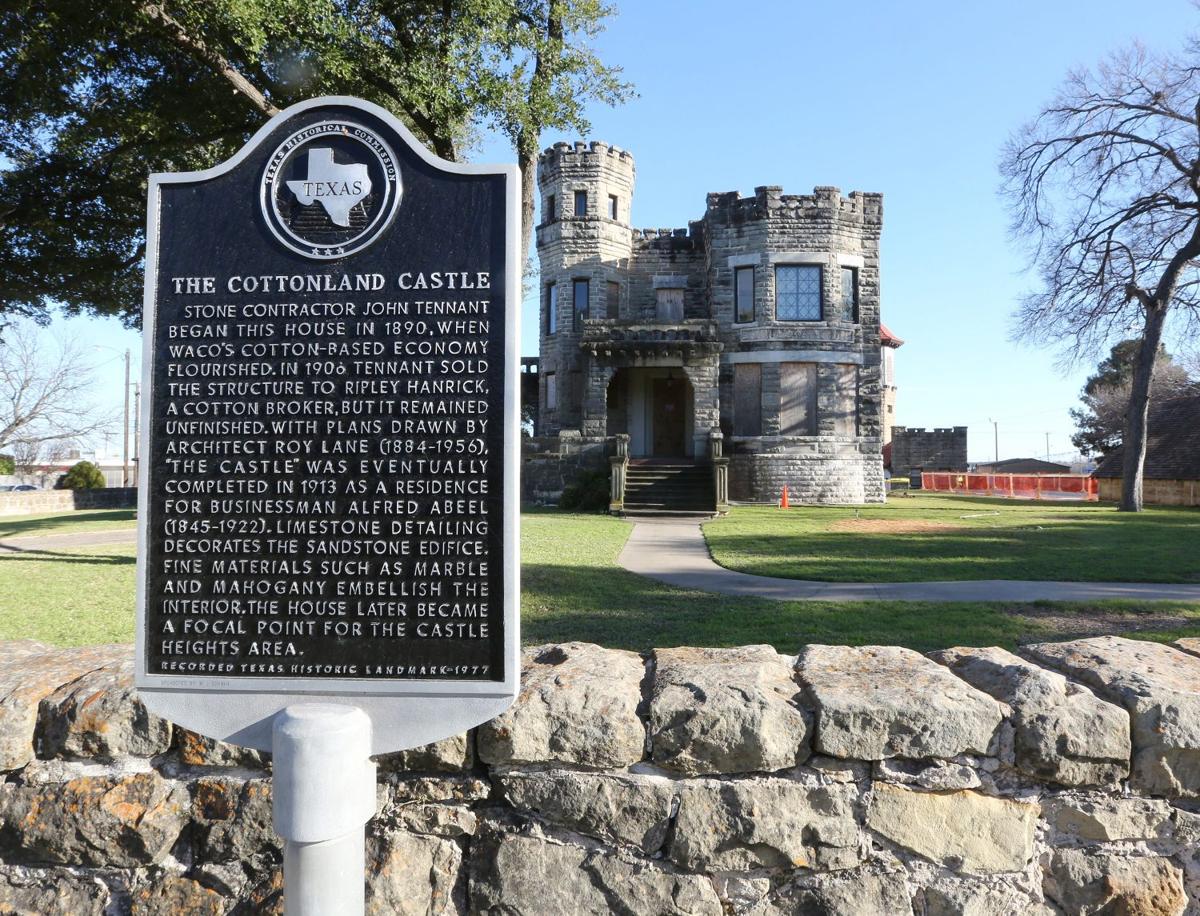 The Cottonland Castle got a historic marker in 1977, and the current owner will have to maintain the historic exterior to keep it. 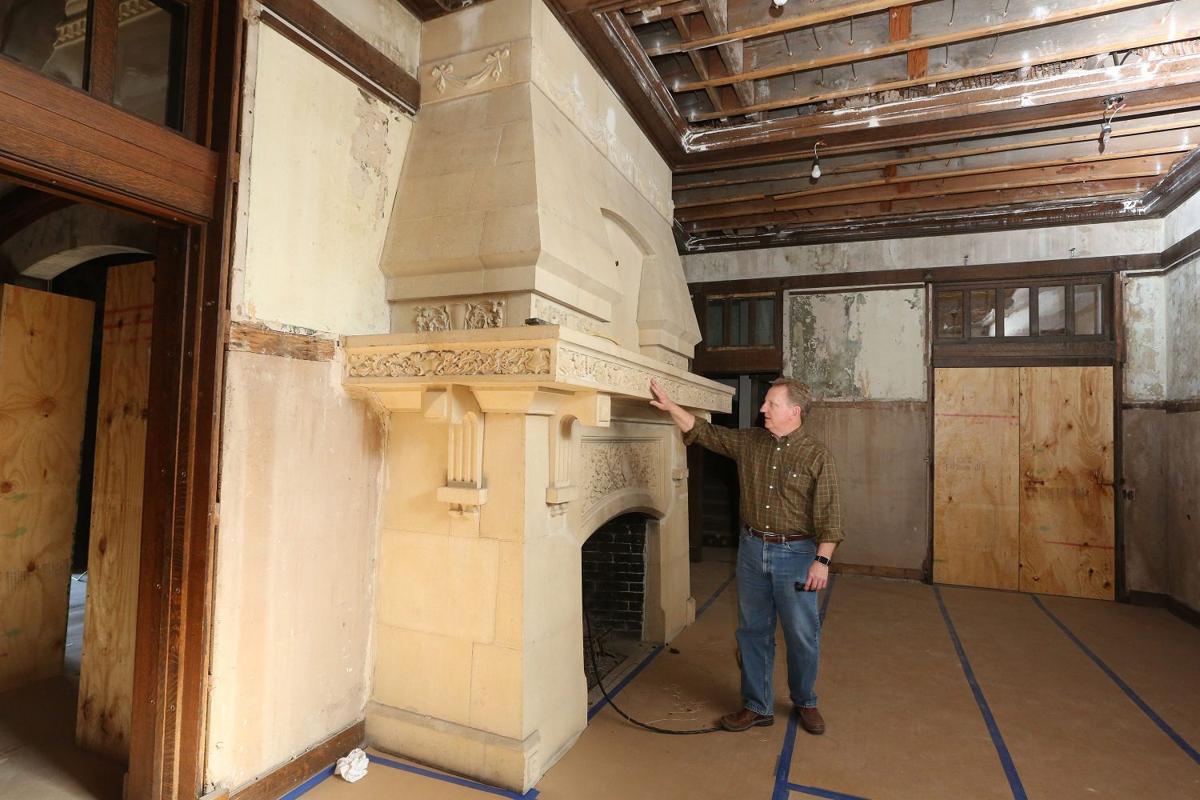 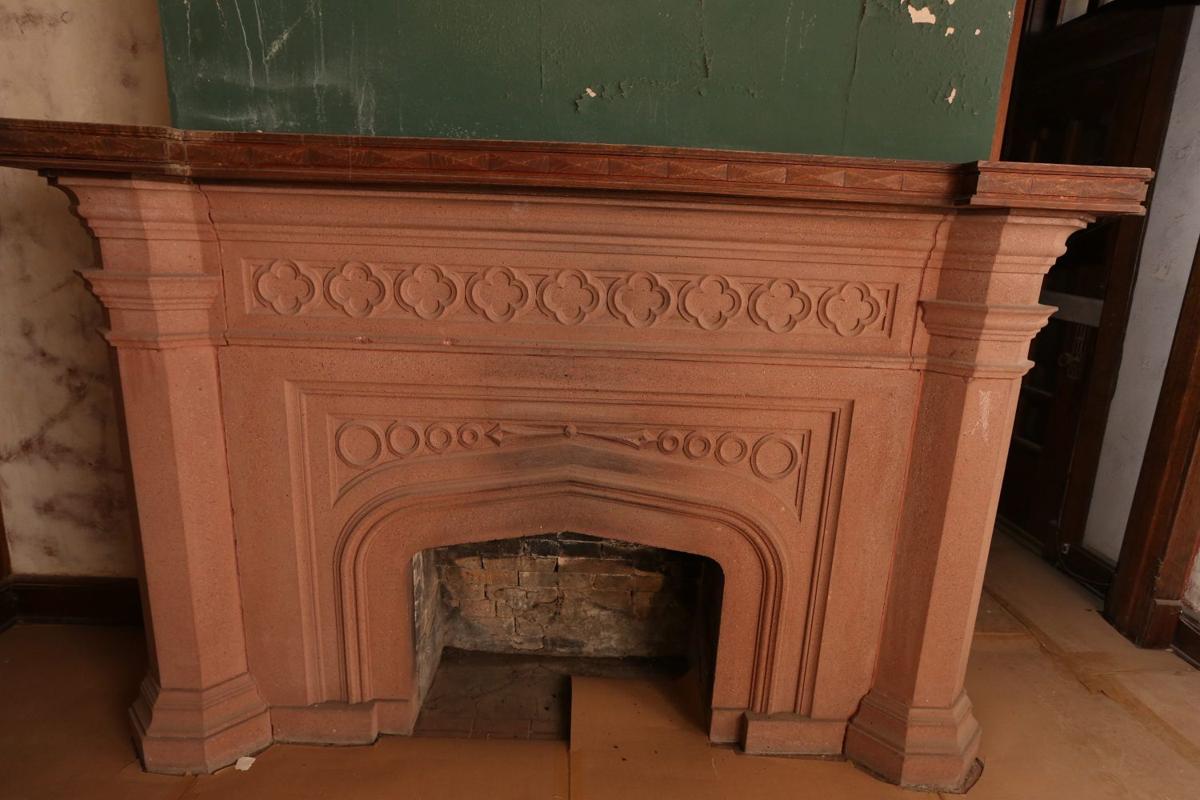 A pink granite fireplace downstairs in the Cottonland Castle. 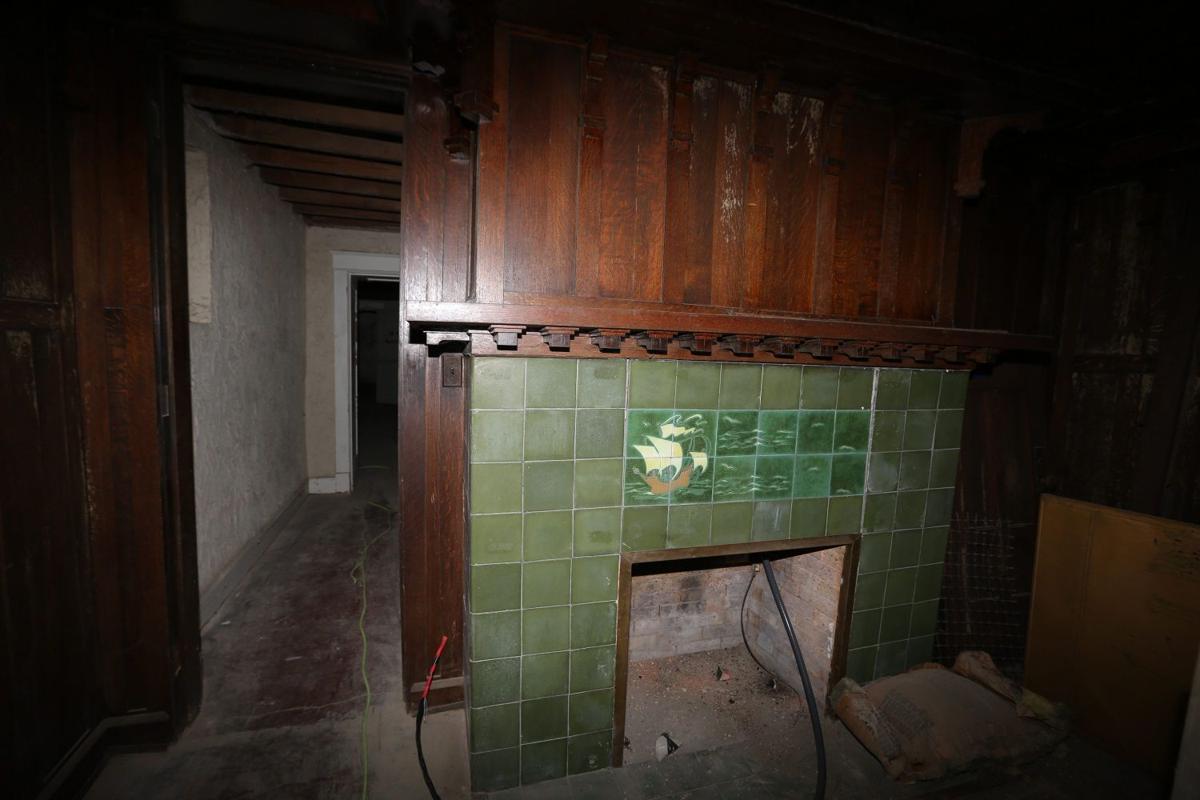 A fireplace in the basement features a Dutch ship, a symbol of heritage for an early owner, Capt. Alfred Abeel. 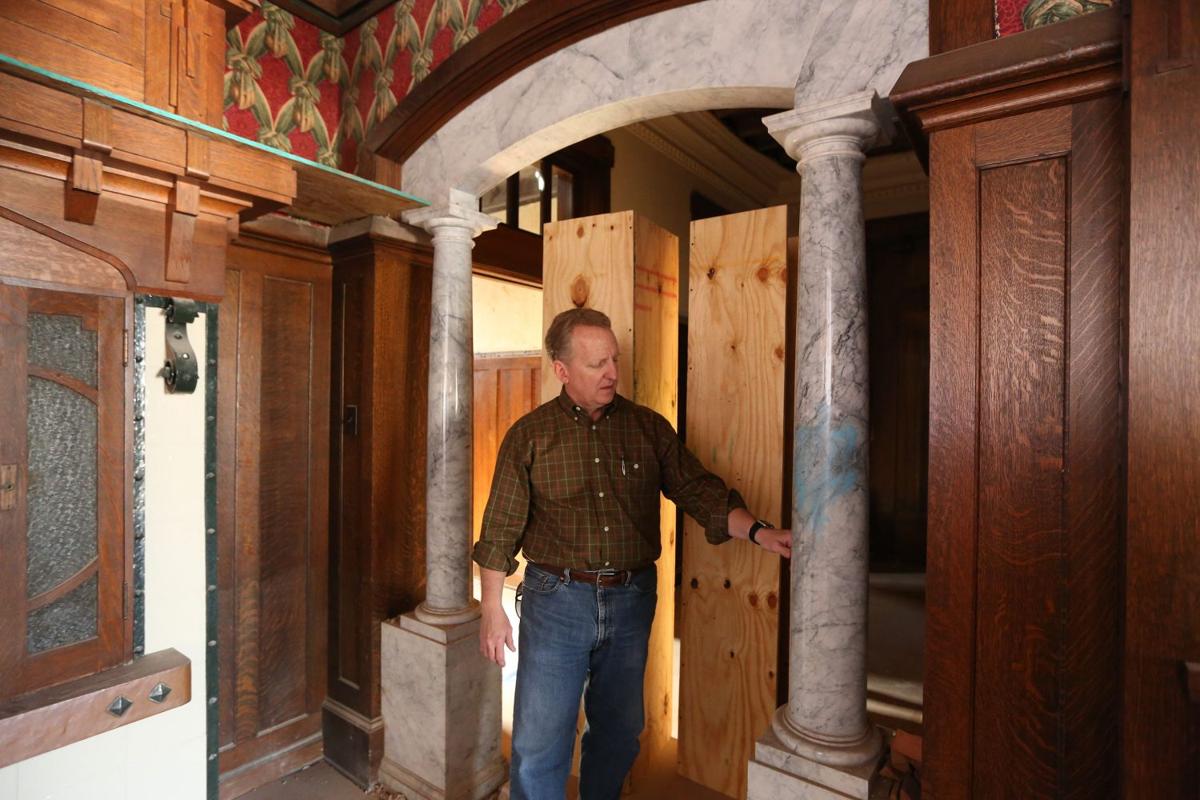 Contractor Tom Lupfer Jr. looks at graffiti on a marble pillar inside the Cottonland Castle. 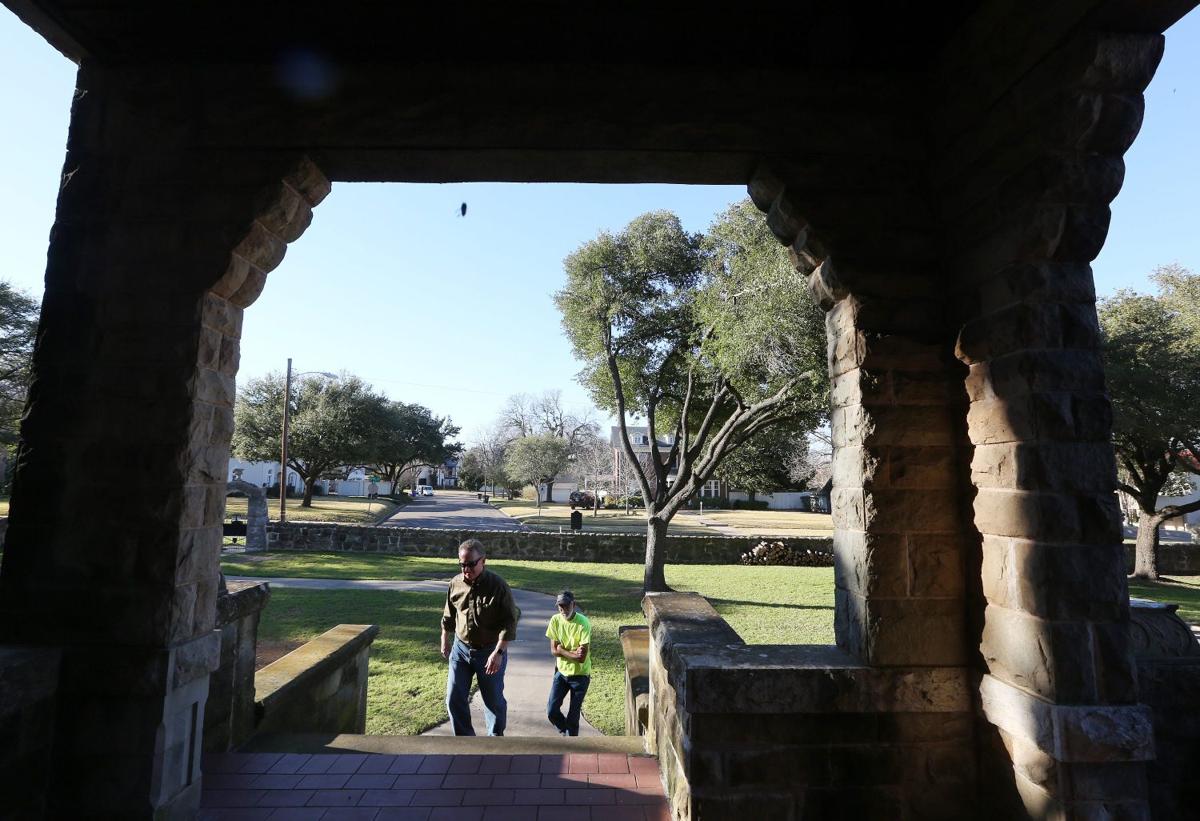 Contractor Tom Lupfer Jr. and construction supervisor James Ussery approach the front porch of the Cottonland Castle, which they are renovating. 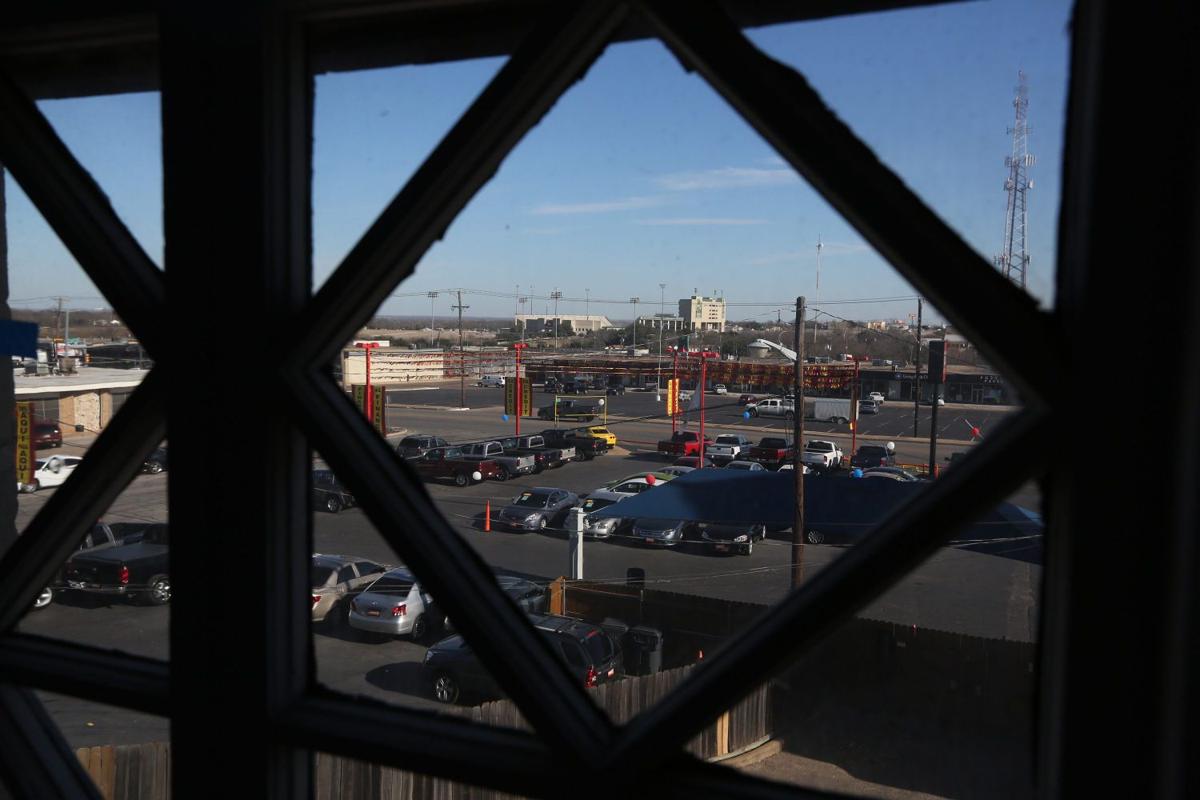 A view from the Cottonland Castle’s back window includes the old Floyd Casey Stadium. 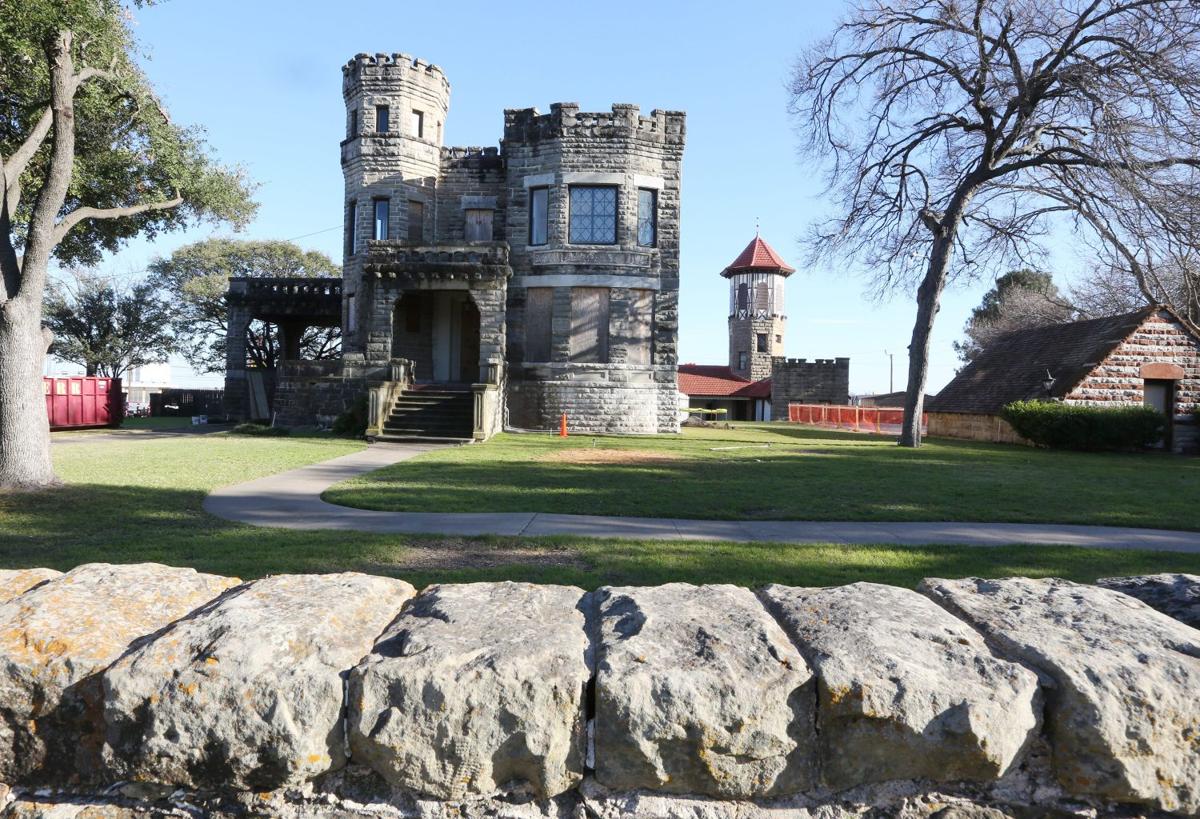 The Cottonland Castle is surrounded by a stone garden wall. The stone structure at far right was a greenhouse, later converted into a pool cabana.

Tom Lupfer Jr. examines the ornate woodwork inside the Cottonland Castle, which he is renovating.

The Cottonland Castle got a historic marker in 1977, and the current owner will have to maintain the historic exterior to keep it.

A pink granite fireplace downstairs in the Cottonland Castle.

A fireplace in the basement features a Dutch ship, a symbol of heritage for an early owner, Capt. Alfred Abeel.

Contractor Tom Lupfer Jr. looks at graffiti on a marble pillar inside the Cottonland Castle.

Contractor Tom Lupfer Jr. and construction supervisor James Ussery approach the front porch of the Cottonland Castle, which they are renovating.

A view from the Cottonland Castle’s back window includes the old Floyd Casey Stadium.

The Cottonland Castle is surrounded by a stone garden wall. The stone structure at far right was a greenhouse, later converted into a pool cabana.

> PHOTOS: Inside the Cottonland Castle on Austin Avenue

For years, the Cottonland Castle has been a landmark and a vacant eyesore for the historic neighborhoods along Austin Avenue.

Now work has begun to turn it into a comfortable home, but it won’t be quick, easy or cheap.

Contractor Tom Lupfer Jr. and architect Sterling Thompson are spearheading the project to bring the 126-year-old castle into the 21st century while preserving its unique architecture.

That means installing new plumbing, wiring and climate control and creating a modern kitchen and bathrooms while meeting the preservation standards needed to maintain it as a registered Texas Historic Landmark.

While they wait for Texas Historical Commission approval for the plans, the team is already doing interior demolition, taking care not to damage the fine materials such as quartersawn oak, mahogany and marble. Crews, working in spooky half-light behind boarded windows, have collected pieces of hardwood paneling and ceiling ornament that had fallen on the floor.

“The inside was a mess,” Thompson said. “I had been there a long time ago, and it looked great. Now all the parts are still there, but they’ve been taken apart.”

Water damage and past mold-remediation work left the interior in disarray, and vandals have tagged the walls with obscenities, even marring a fine marble archway with blue spray paint.

Still, Lupfer is confident the home will be restored to its earlier glory.

“How many times are you going to get the opportunity to take something like this and do it right?” Lupfer said. “We don’t want to miss the window of opportunity to bring it up to standard.”

The Tribune-Herald reported in October 2014 that Oxford University classicist Dirk Obbink had bought the home. Obbink confirmed by email this week that he is “part of a larger project to renovate the house as a single-family home led by Tom Lupfer.”

Lupfer has been the contractor for renovating the historic buildings at Quinn Campus for Rapoport Academy. In 2013, he began the $1 million project for Waco residents Robert and Kitty Tunmire to renovate the old Migel House on Columbus Avenue as a bed and breakfast.

“I thought that was a once-in-a-lifetime project,” Lupfer said. “The fact that I’d get to work on two projects like this in the span of three years is incredible. . . . I’m more than a little humbled to be a part of it.”

He said some Waco residents who have heard about the project have raised questions about how faithfully the castle’s original architecture will be preserved. He said the Migel House offers a good template of how to both restore and modernize.

“If you want to see what we’re going to do, take a look at the Migel House,” Lupfer said. “We are going to take consideration and care for the historic nature of the building, knowing how prominent this is for Waco and the neighborhood.”

Lupfer said the exterior will be restored to its original appearance, with diamond-paned windows carefully repaired, stone repointed and 1970s-era storm windows removed.

The team also will take pains to preserve and restore the ground-floor interior, which includes quartersawn oak and mahogany and breathtaking fireplaces made of carved French Caen stone and pink granite.

> PHOTOS: Inside the Cottonland Castle on Austin Avenue

Another prized feature of the ground floor is the 9-foot-high oak front door, which still pivots easily on its hinges despite its weight of 400 pounds.

But Lupfer said the back of the house needs to be redesigned to include a modern kitchen, if the Texas Historical Commission approves. A sunroom that was walled in a couple of decades ago might also be removed.

In the past, the kitchen was in the basement, and food was hoisted up on a dumbwaiter.

“The goal is a full-sized modern kitchen that’s not stuck down in a dank basement,” Lupfer said. “Most people don’t have servants these days, and the kitchen is integral to entertainment.”

Likewise, the upstairs layout will be modified to make room for modern bathrooms and closets, while preserving some notable details such as plaster crown molding, he said.

“There’s an equilibrium we’re looking for,” Lupfer said. “We want to preserve this historic building. There’s also a huge sum of money being invested, and if at some point they want to sell it, they’d like to be able to get some of that back. If we simply go about it as a pure preservation project, it’s exponentially more difficult to recoup that substantial investment.”

Kenneth Hafertepe, a Baylor University museum studies associate professor and historic preservation expert, said he understands the need to make some changes to the house to carve out a modern kitchen and bathrooms.

“I do feel strongly that the interior character is part of the historic character of the house, so you need to think carefully about that,” Hafertepe said. “But there are reasons for upgrading the house to make sure it’s comfortable.”

In the long term, Lupfer said the owner hopes to improve the appeal of the castle by purchasing the property across the alley that fronts on Franklin and now serves as a used car lot. Lupfer said he has been in touch with the owner of that property, Jack Schwan, who used to own the castle.

The car lot property includes a tower that was once part of the castle and served as a water tank for the house before the house was connected to city water.

Lupfer said he feels confident about the castle’s future, but he noted that the house’s past has rarely been smooth.

“I’m hoping it doesn’t have a builder’s jinx on it,” he said with a chuckle. “There have been a lot of starts and stops and false hopes.”

> SLIPPING AWAY: In search of Waco's most endangered historic buildings

The Cottonland Castle dates back to 1890, when a British-born stonemason named John Tennant began building the foundation and basement with stone left over from working on the Provident Building downtown.

Tennant struck a deal with landowner J.W. Mann for the patch of barren prairie on a high spot overlooking Waco, giving Mann in return a stone obelisk for the family’s plot at Oakwood Cemetery.

Tennant didn’t have the resources to finish the grand house he had in mind, so he sold it to cotton broker Ripley Hanrick in 1906, agreeing to continue with the stonework. The work building the heavy stone walls resumed but was abandoned in 1908.

Meanwhile, a group of local investors were preparing to create the Huaco Country Club around present-day Sanger Avenue and 29th Street, with golf links that would extend nearly to the castle, and some wanted it torn down. Roy E. Lane, the architect for the country club, saw an opportunity to turn the eyesore into a landmark. In 1913, he persuaded Capt. Alfred Abeel and family to buy the stone structure and hire Lane to turn it into a German-style castle.

Abeel, a Union veteran from New York who was wounded at Chickamauga in the Civil War, had moved in 1872 to Waco, where he amassed a fortune in the hardware, banking, railroad, ice and artesian water businesses.

The castle and its outbuilding required 120 train carloads of stone, mostly white sandstone, according to news reports from the time. The three-story house included a basement, a 60-foot tower on the corner and a flat roof with a crenelated top.

In the 1940s, the Pipkin family, which owned Pipkin Drug Stores, bought the house and for years made it their home. Eventually, the Pipkin family moved out and donated the castle to Austin Avenue Methodist Church, which used it for a youth event center until upkeep became overwhelming.

The family of Jack Schwan, a local car dealer, bought the house for $50,000 in 1969 and began years of renovations that led to a state historic marker in 1977.

Schwan’s family lived in the house until the 1980s and finally sold it to the Brian Ginsburg family in 1991. The house sold to the Hatch Bailey family in 1999 and suffered water damage when the family was not occupying it. Russell Giles and Clarissa Carter bought the house in 2006 and started renovations but never finished them.

“Buildings are meant to be used, and when they’re not, they go downhill,” Peters said.

He said it sounds like Lupfer and Sterling have a good plan for renovating it, and he has no problem with an addition on the back.

“This is exciting that it’s being restored as a residential structure,” Peters said. “I think it’s real important, an iconic symbol and structure for Waco and Castle Heights.”

Imagine if the Waco tornado 62 years ago had ripped out the Waco Suspension Bridge, the ALIC…

Slide show: Inside the Cottonland Castle

An Oxford University classics scholar has bought the Cottonland Castle on Austin Avenue, raising hopes among preservationists and neighbors that the vacant 124-year-old landmark will be rescued from disrepair.