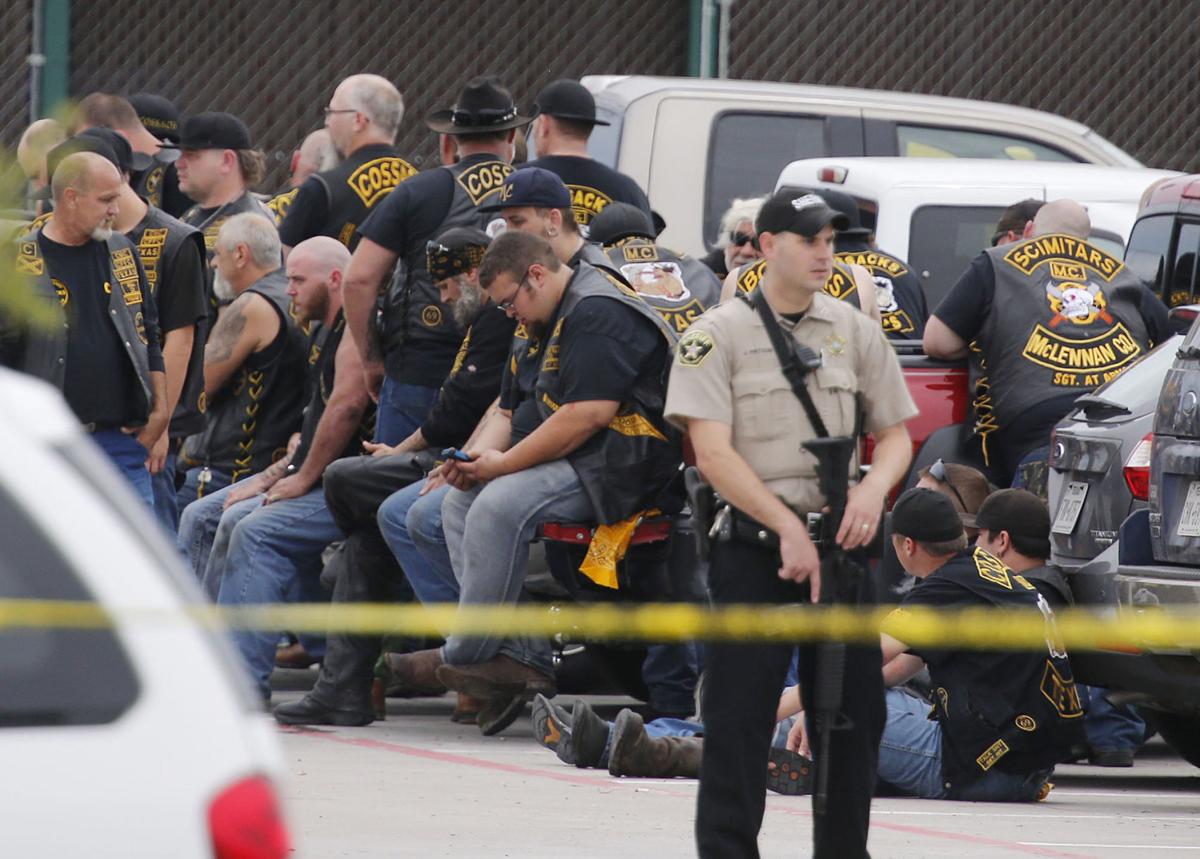 Bikers wait to be transported after the Twin Peaks shootout. 47 more bikers are suing over their arrests after the shootout. 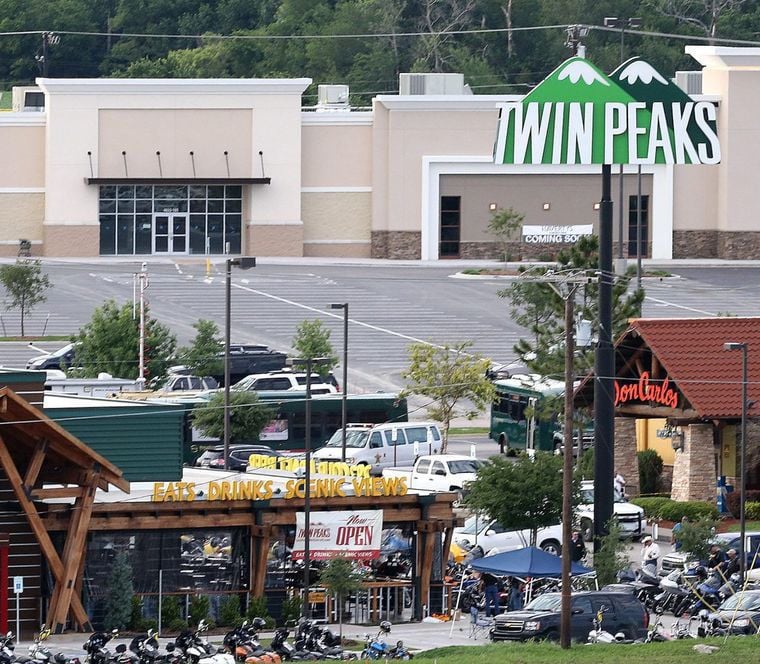 Costs of the Twin Peaks biker cases are continuing to mount, even as the trials are put on hold for a federal case against national leaders of one of the groups involved in the deadly melee.

Bikers wait to be transported after the Twin Peaks shootout. 47 more bikers are suing over their arrests after the shootout.

Costs of the Twin Peaks biker cases are continuing to mount, even as the trials are put on hold for a federal case against national leaders of one of the groups involved in the deadly melee.

Although the Twin Peaks biker trials have been put on hold until after a federal case against Bandidos leaders concludes, McLennan County continues to rack up expenses related to one of the most complex legal proceedings in its history.

The two-year anniversary of the May 17, 2015, Twin Peaks shootout is approaching, yet none of the 155 bikers indicted in the melee has gone to trial.

Since the shootout, top national leaders of the Bandidos motorcycle group were indicted in federal court in San Antonio, which has further complicated matters in McLennan County. Federal prosecutors have informed McLennan County officials that they obtained evidence pertaining to the Twin Peaks incident during the federal Bandidos investigation, but they intend to keep it to themselves until after the six Bandidos go to trial, set now for Aug. 7.

McLennan County judges have concluded that the trials of Twin Peaks cases should not begin without allowing prosecutors and defense attorneys a chance to view the federal evidence that pertains to Twin Peaks.

In the meantime, McLennan County prosecutors continue to turn over voluminous amounts of evidence to defense attorneys while waiting for other evidence, including DNA samples, to be tested and analyzed.

According to records obtained from the McLennan County auditor’s office, McLennan County has paid out $208,239 in Twin Peaks-related expenses, including fees to court-appointed attorneys and lawyers hired to represent two elected county officials in federal civil lawsuits and grievances.

Other costs have been offset by a state grant from the governor’s office designed to reimburse counties for expenses related to major offenses. So far, the state has awarded the county $268,527 for Twin Peaks related expenditures. The largest part of that was $190,010 that went to cover housing at the Jack Harwell Detention Center for some of the 177 bikers arrested on the day of the shootout, which left nine dead and dozens injured.

Also, the county was reimbursed $24,500 for costs of the nine autopsies and transportation of the bodies.

The city of Waco received a $248,941 grant from the Justice Department, which primarily went to cover overtime costs for officers involved at Twin Peaks.

But as the cases drag on, county officials will be meeting as budget time approaches to try to predict the unpredictable costs associated with one of the most unusual, complex cases that has come around.

McLennan County Judge Scott Felton said he got a call from Gov. Greg Abbott the day after the shootout. Abbott told him the matter was not just a Waco problem, but also a statewide issue, and promised resources from the state to help the county defray costs.

“It is, of course, a very unusual, fluid situation that we have to deal with,” Felton said.

With trial delays and multiple defendants, the costs can be spread out over several budget years, he said.

“We have to be gathering information to see what impact it will be having on the budget and the next budget through 2018,” Felton said. “I will be meeting with the district judges and the district attorney to try to get a handle on all of that. But, of course, we know there will be unexpected expenses. There always is.”

Judge Matt Johnson said he spoke to Felton a few weeks ago after a pretrial hearing involving one of the bikers in 54th State District Court.

Attorney Millie Thompson, of Austin, was telling the judge about the terrific burden it is for defense attorneys to review the avalanche of documents, photos, cellphone records, social media records and video and audio tapes turned over to them by prosecutors in eight or nine rounds of discovery.

She said she had received at least 872,865 pages of documents so far.

“So, if that is the last one, that would be the number of pages to date,” Thompson said. “And I think I did the math, that if you took 30 seconds to a minute to go through each page, that could take 300 days.”

Court officials say the attorneys are duty-bound to review all the information they have received, especially if some of it contains information favorable to their clients.

There are about 70 court-appointed attorneys on the case, which means the county picks up the bill for the legal expenses. The other bikers have retained attorneys to represent them.

Court-appointed attorneys are paid $75 an hour for out-of-court time and $80 an hour for in-court time. They also are paid $50 an hour for travel time, plus mileage, and with the number of defendants in this case, there are a lot of out-of-town attorneys.

“I consulted with Judge Felton about potentially larger than normal attorneys’ fees because of the volume of information being turned over by the district attorney’s office to court-appointed attorneys,” Johnson said.

Some attorneys also have mentioned the possible need for county-paid investigators and expert witnesses, including crime scene reconstruction experts, DNA experts and other consultants who don’t normally come cheap.

And if attorneys win a change of venue after the first or second trial is held in Waco, the costs for those proceedings can double the normal rate, officials said.

“Budgeting for cases like these is a challenge,” County Auditor Stan Chambers said. “We try to anticipate in advance all the expenses we may have, but in these kind of cases, there are a lot of unknowns that come up: changes of venue, investigators, expert witnesses, so many variables. It is similar to the capital murder cases a few years ago. There was a change of venue to Williamson County, and we tried to estimate what that was going to cost us. It reminds me of that.”

A federal judge has extended a stay until Sept. 1 in the civil rights lawsuits filed by bike…

In the two years since James “Patrick” Harris was arrested after the Twin Peaks shootout in Waco, he lost the lease on his apartment, was reje…

As the first case involving the May 2015 Twin Peaks shootout appears heading to trial, McLennan County officials continue to plan for the pote…

One month of increased security at the McLennan County Courthouse cost more than $400,000 in overtime pay for the first Twin Peaks shootout tr…