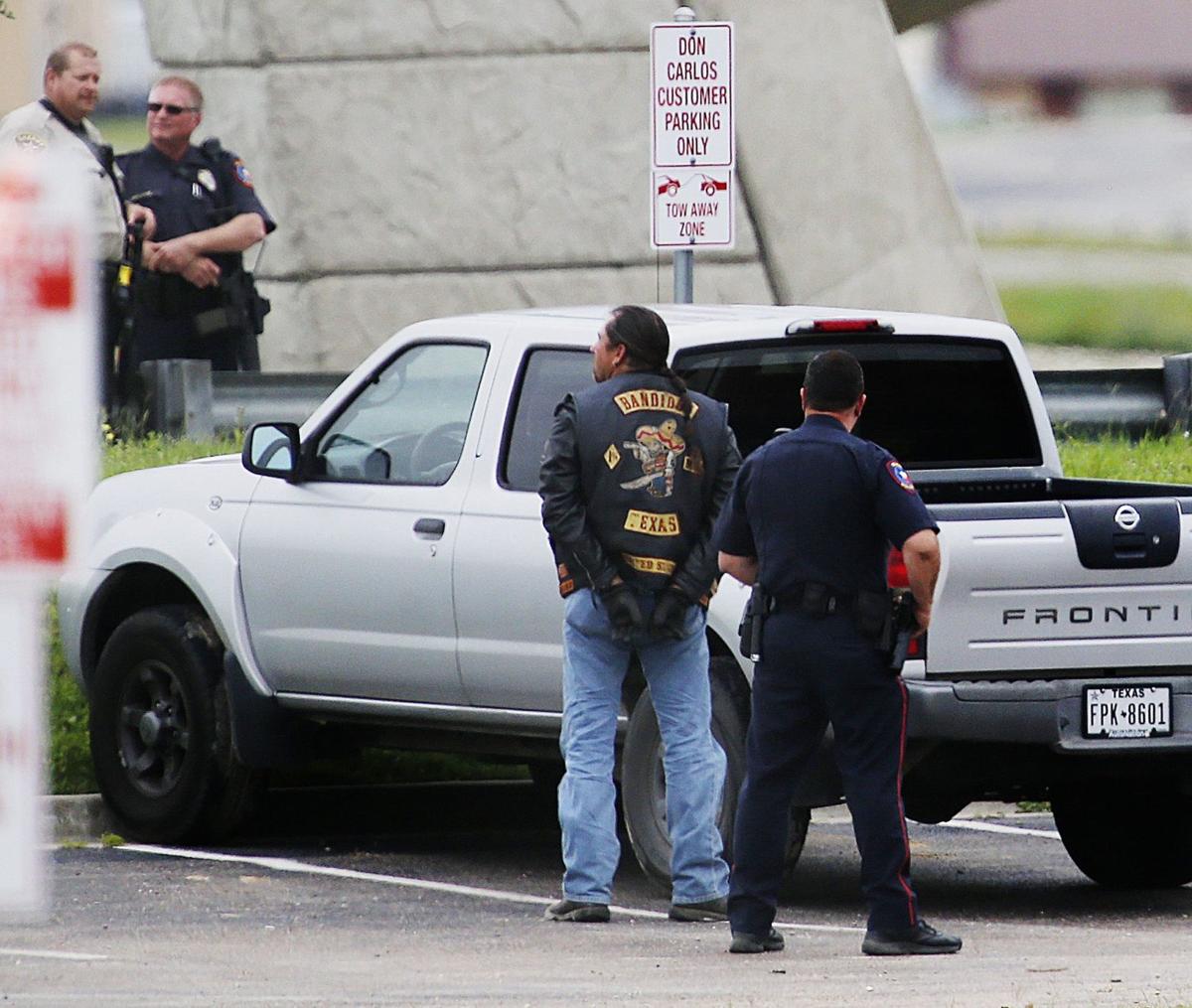 A biker is arrested after the shooting at Waco’s Twin Peaks restaurant May 17, 2015. 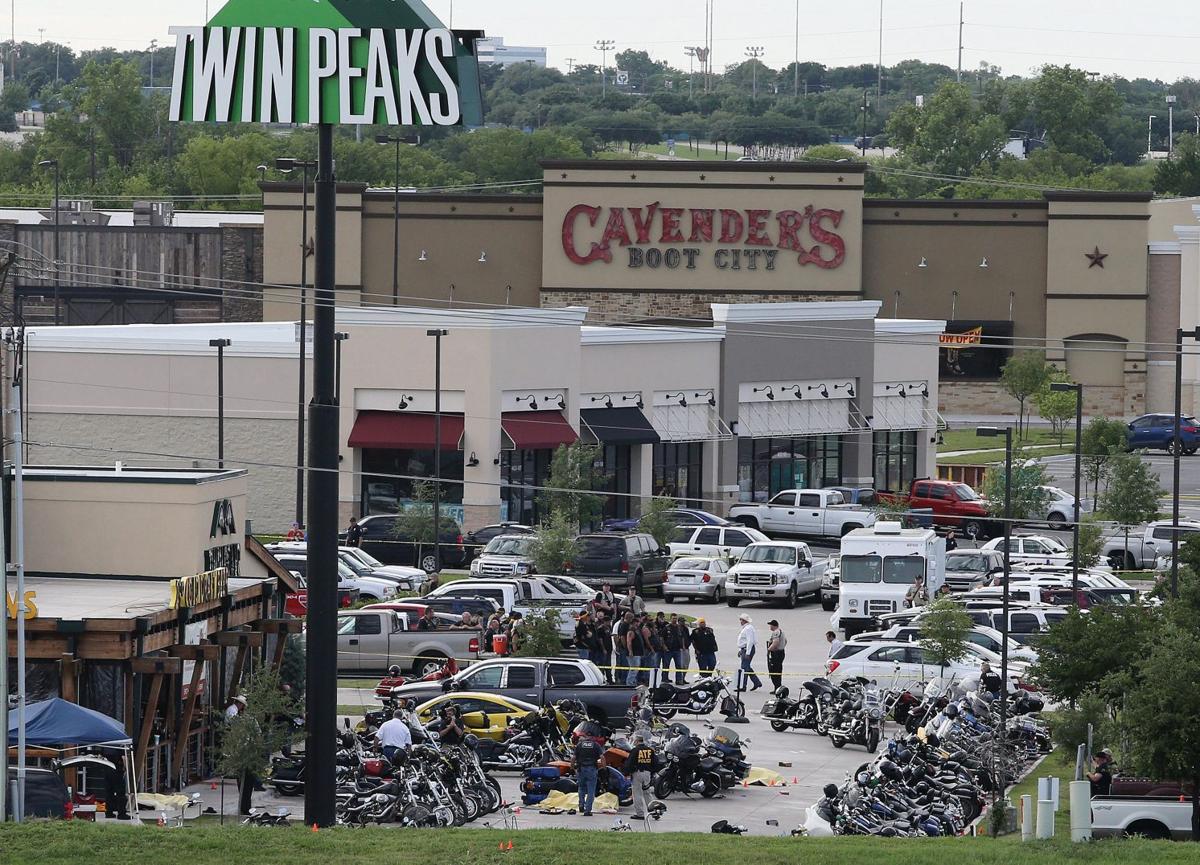 An indictment announced by the U.S. Attorney’s Office in San Antonio accuses three Bandidos leaders of sanctioning a three-year fight that included violent clashes with rival gangs and distribution of methamphetamine.

A biker is arrested after the shooting at Waco’s Twin Peaks restaurant May 17, 2015.

An indictment announced by the U.S. Attorney’s Office in San Antonio accuses three Bandidos leaders of sanctioning a three-year fight that included violent clashes with rival gangs and distribution of methamphetamine.

SAN ANTONIO — National leaders of the Bandidos biker gang were arrested Wednesday on charges accusing them of racketeering and waging a deadly “war” on the rival Cossacks gang, federal authorities said.

Three Bandidos leaders were accused of sanctioning a three-year fight that included violent clashes with rival gangs and distribution of methamphetamine, according to an indictment announced by the U.S. Attorney’s Office in San Antonio.

The accusations focus on a rivalry that came under renewed attention in May, when a meeting of biker groups at a Twin Peaks restaurant in Waco ended in gunfire that left nine people dead and at least 20 wounded. Authorities say that confrontation began when members of the Cossacks crashed a meeting of a confederation of biker clubs that included the Bandidos.

A dispute in the Twin Peaks parking lot ended in gunfire between the bikers and police standing nearby. However, the indictment makes no mention of the May 17 Twin Peaks shootout.

The indictment gives a day-by-day account of actions taken by the Bandidos while skipping the events that unfolded May 17 in Waco.

“That matter is being handled by the local DA,” Daryl Fields, public affairs officer with the United States Attorney’s Office in San Antonio, told the Tribune-Herald on Wednesday.

The next dated entry after May 17 was for May 23, where it states Portillo raised Bandidos’ dues to prepare to pay for bonds and legal expenses for members that would go to jail for “club business,” including criminal acts committed against member of the Cossacks. Members’ fees went from $50 to $100 per month, and support-club members’ fees were required to go from $25 a month to $50 a month.

The gag order applies only to the case of Matthew Clendennen — a Hewitt biker and a member of the Scimitars Motorcycle Club — not each and every case, but Swanton said the police department’s legal office has a different interpretation.

Swanton said he stands by comments he made to the Tribune-Herald shortly after the shootout.

The federal indictment accuses John Portillo, the Bandidos’ national vice president, of using dues and donations to pay legal expenses of its members days after the Waco shooting.

An attorney who works with the Bandidos could not be reached for comment by the Associated Press.

“Operation Texas Rocker has inflicted a debilitating blow to the leadership hierarchy and violent perpetrators of the Bandidos Outlaw Motorcycle Gang,” said Joseph M. Arabit, special agent in charge of the Drug Enforcement Administration’s Houston field division, in a statement. “This 23-month operation highlights a deliberate and strategic effort to cut off and shut down the supply of methamphetamine trafficked by the Bandidos as well as other related criminal activity.”

The indictment outlines several other clashes between the Bandidos and rival clubs, including a December 2014 shooting at a bar in Fort Worth, where a biker from a different club was killed. The indictment accuses Bandidos bikers of harassing and attacking bikers across Texas, as part of the “war” that Portillo had declared.

“These indictments and arrests are the result of the ongoing partnership and collaboration between the FBI, DEA and DPS to neutralize one of the most dangerous criminal organizations in Texas,” FBI Special Agent in Charge Christopher Combs said in a statement.

“This effort not only exemplifies our commitment to prevent gang violence and criminal activity from poisoning our communities, but it also sends a clear message that we will relentlessly pursue and prosecute the leaders and members of these violent criminal enterprises.”

The federal indictment states that allegiance to the Bandidos organization and their fellow brothers is valued above all else.

“Witnesses to their criminal acts are typically the victims of acts of intimidation or harassment and are too afraid to approach law enforcement to testify in court proceedings,” according to the federal indictment. “Bandidos OMO members do not fear authority and have a complete disdain for the rules of society. The Bandidos OMO is very careful about admitting individuals into the enterprise.”