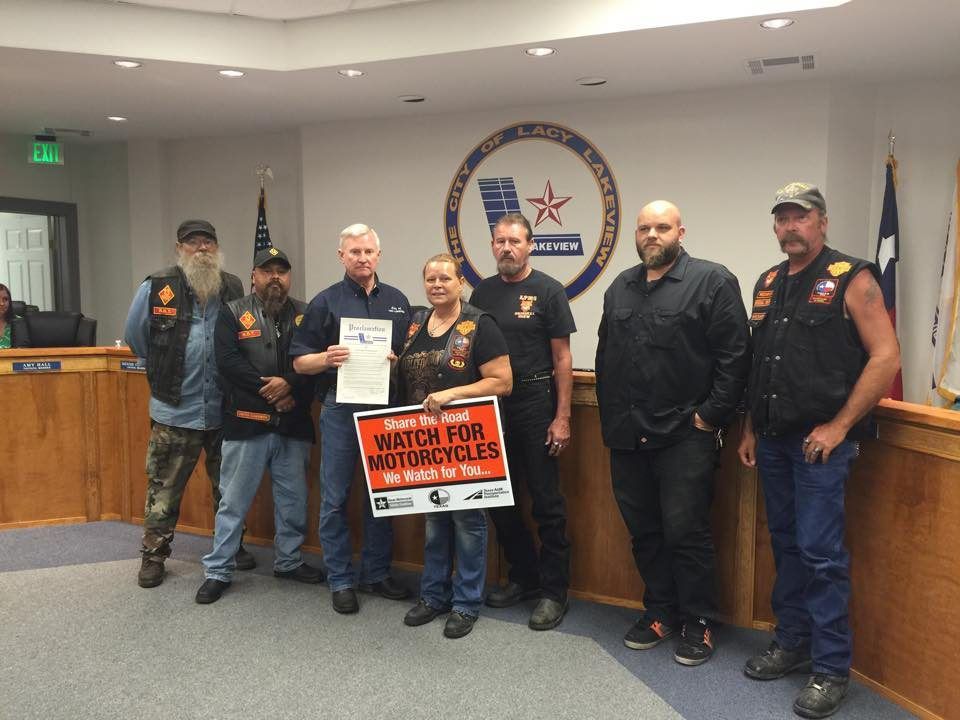 Sandra “Drama” Lynch (center) was a part of a group that accepted a proclamation last week from Lacy Lakeview City Council for motorcycle awareness month. 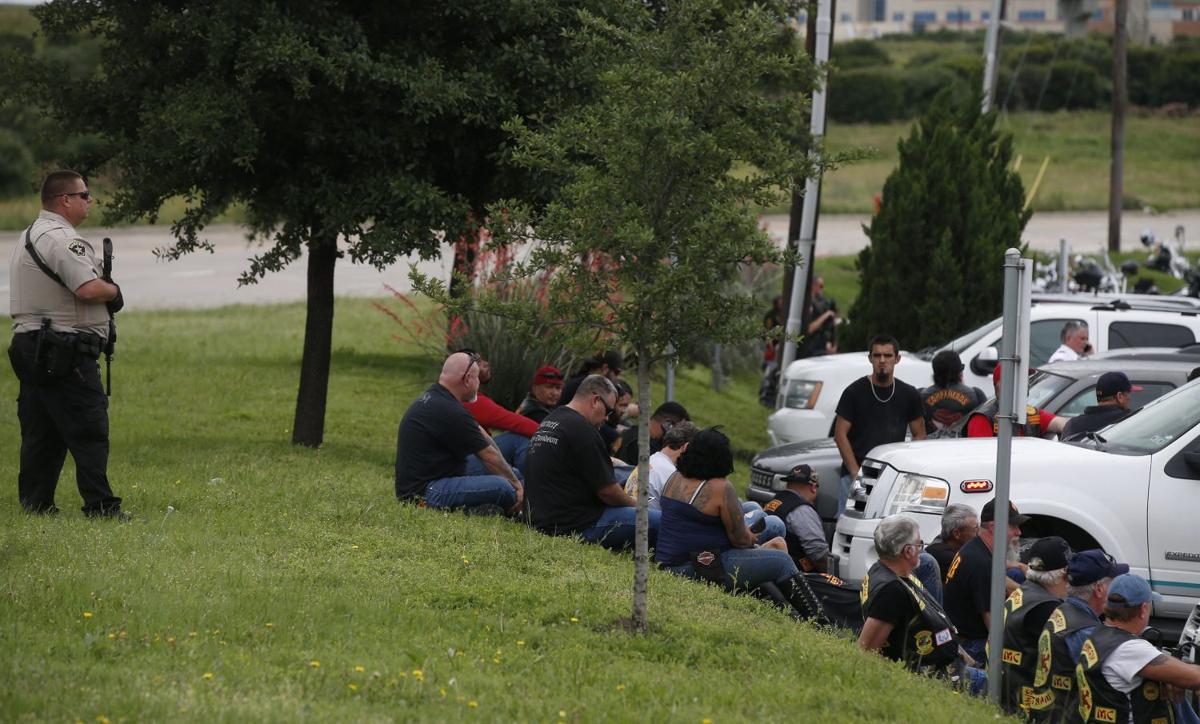 Friends and family members are saying that some of the 170-plus bikers arrested after Sunday’s shootout are law-abiding people who should not be jailed.

Sandra “Drama” Lynch (center) was a part of a group that accepted a proclamation last week from Lacy Lakeview City Council for motorcycle awareness month.

Friends and family members are saying that some of the 170-plus bikers arrested after Sunday’s shootout are law-abiding people who should not be jailed.

In fact, she reserved the patio for Sunday’s meeting of a regional bikers’ rights coalition at Twin Peaks restaurant.

Now Lynch, 53, is in the McLennan County Jail on $1 million bond, along with her husband, Mike Lynch, 62, a plumber. The arrest warrants say the Lynches were part of organized criminal activity that led to the Twin Peaks shootout that left nine bikers dead.

Some local bikers say that accusation is nonsense, though they might use saltier language.

“They didn’t have nothing to do with nothing,” said Steve “Dozer” Cochran, of Waco, who was working with Sandra Lynch to set up for the regional Texas Confederation of Clubs & Independents meeting at Twin Peaks, scheduled for 1 p.m. Sunday. He said the Lynches were among the innocent victims of a law-enforcement sweep.

“Instead of doing an investigation and coming up with credible evidence and arresting those who have been involved in wrongdoing, they have arbitrarily placed everyone there,” Cochran said.

Twenty-four of the 171 people arrested in the Twin Peaks shooting were from McLennan County, as was one of the nine deceased, Daniel Boyett.

Cochran is state co- director, along with Sandra Lynch, in the U.S. Defenders Legislative Strike Force, a biker advocacy group. Cochran belongs to Sons of the South MC, while Lynch is president of the Los Pirados MC, a “mom and pop” club based in McLennan County. But Lynch is well-loved across the local biker community, Cochran said.

“She’s the mama,” he said. “She’s the room mother who takes care of all the MCs in Waco. If someone has cancer or gets in an accident, she’s the one who helps put benefits together so they don’t lose their houses.”

Sandra Lynch also has traveled across the state promoting a “share the road” campaign. She was a part of a group that accepted a proclamation last week from Lacy Lakeview City Council for motorcycle awareness month.

Henry Hill, a motorcycle technician at Jim’s Cycle Shop in Axtell, agreed that Lynch is known for her charitable and advocacy work, and he thinks she was simply at the wrong place and time Sunday.

“It was a political rights meeting that people crashed and started the violence,” he said. “Some people got swept up just because they were there.”

Police earlier this week said the violence at Twin Peaks began when an uninvited “gang” showed up at a meeting of other “criminal gangs.”

The Texas COC&I leadership includes the Bandidos, the dominant Texas motorcycle club that state and federal law enforcement agencies consider an outlaw gang involved in crime and drug trafficking. The Bandidos’ rivals, the Cossacks, are not part of the confederation but showed up Sunday anyway. Some of those ended up dead or in jail, but exact numbers are not available.

Cochran and other participants at Sunday’s event have disputed police descriptions of the meeting, saying it included veteran groups and “mom and pop” clubs who wanted to learn about biker legislation.

The arrests created a hardship on the Lynch family, said Megan Anderau, the couple’s daughter.

“We’re very upset right now,” said Anderau, who works at a store in Mount Calm. “As far as we know, our parents were not involved in any form or fashion. Mom was there for motorcycle rights.”

Anderau said Sandra Lynch is caretaker for her 13-year-old grandson and has seven rescue dogs, and Lynch’s grown children have had to take over those responsibilities.

They also have had to take charge of Mike Lynch’s plumbing business.

“It’s pretty rough, because we don’t know much about the business,” she said.

Mart Mayor Pro Tem Henry Witt III grew up with the Lynches’ children and said he thinks they are a community-minded couple. He said he doubts they had anything to do with the violence Sunday.

“It’s hard for me to believe Sandra and Mike are murderers,” he said. “I just don’t want to think of them like that.”