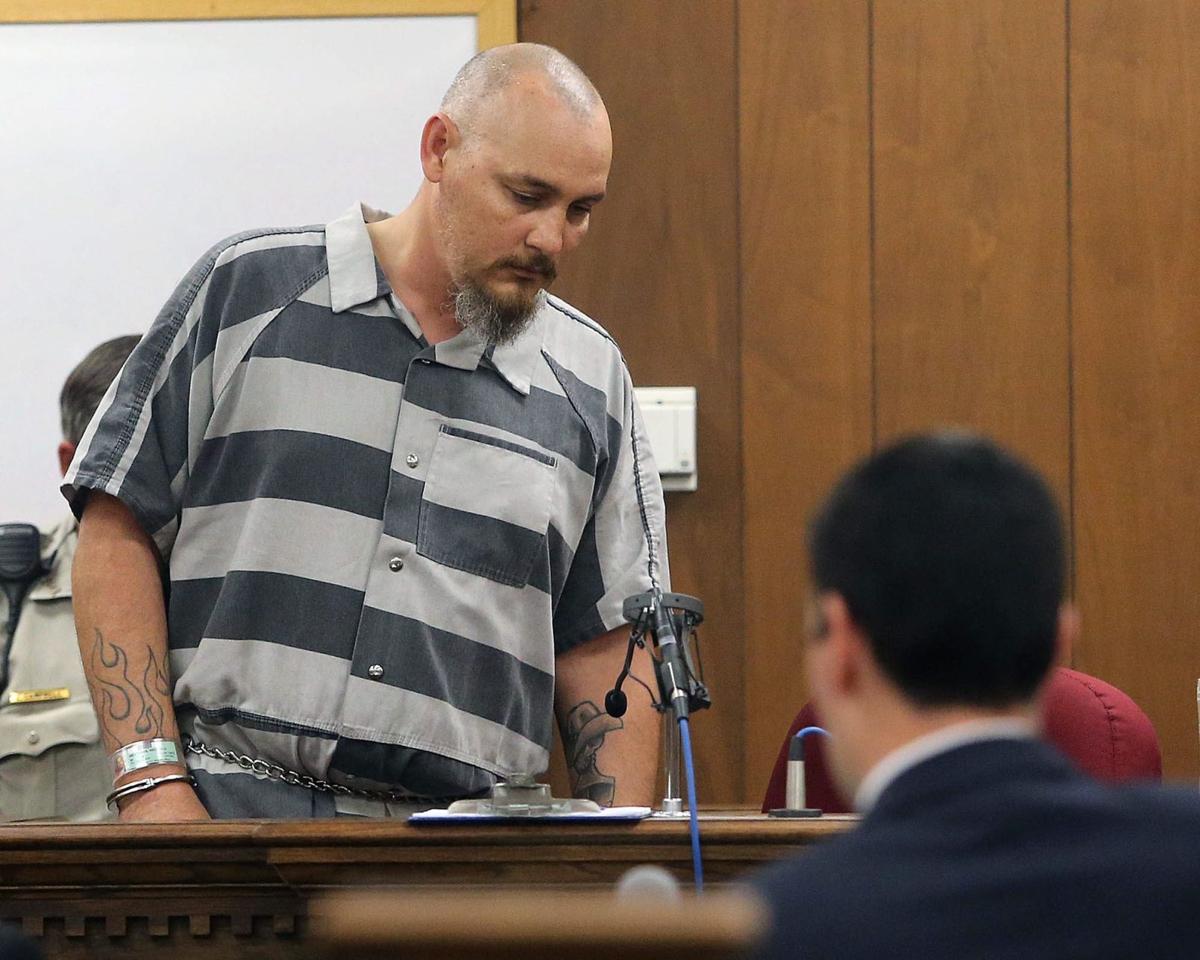 Reginald Weathers, a member of the Bandidos, was shot in the arm and chest May 17 at Twin Peaks. 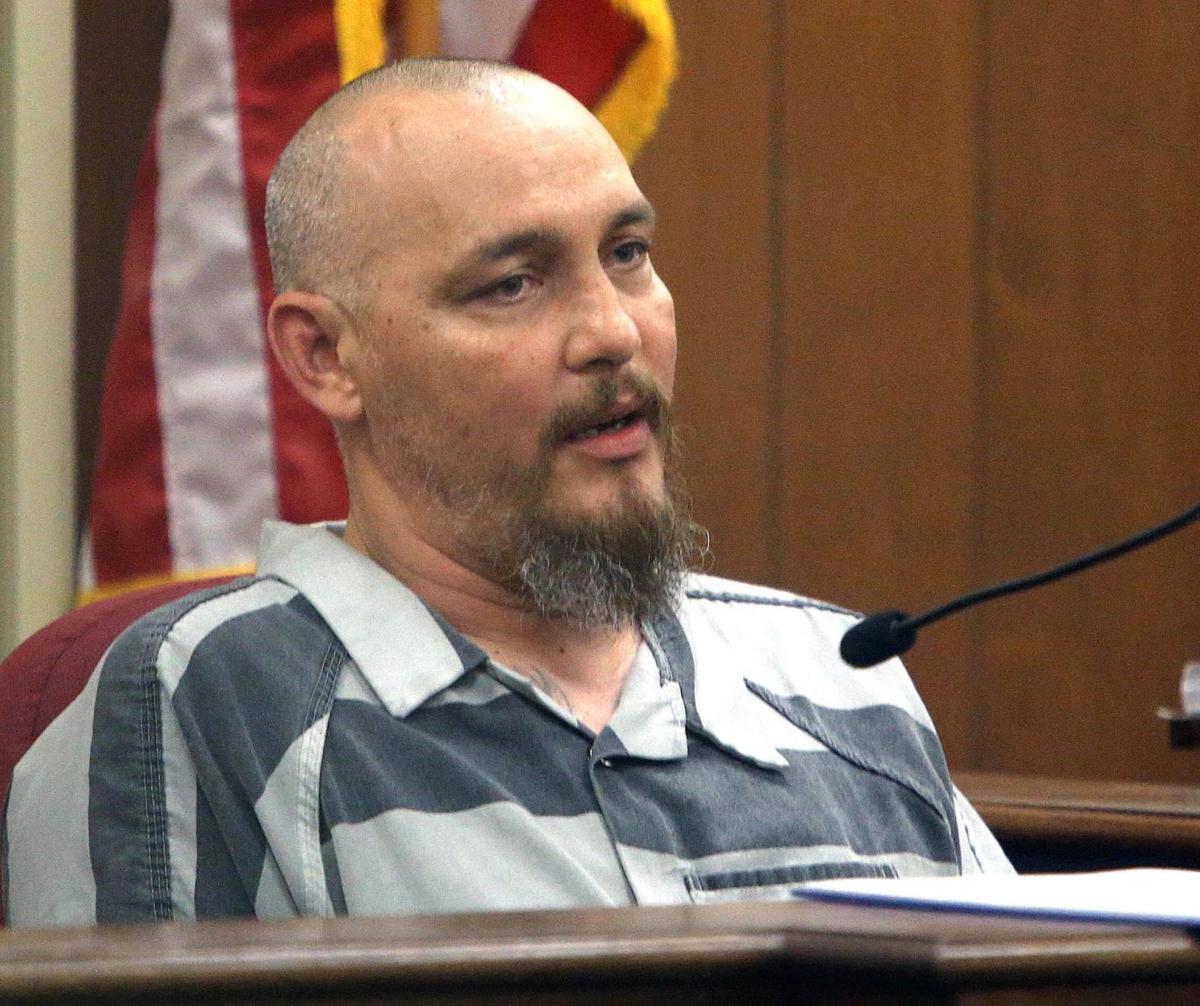 Reginald Weathers, a member of the Bandidos, takes the stand in his bond reduction hearing Wednesday.

Reginald Weathers, a member of the Bandidos, was shot in the arm and chest May 17 at Twin Peaks.

Reginald Weathers, a member of the Bandidos, takes the stand in his bond reduction hearing Wednesday.

A member of the Bandidos motorcycle gang described Wednesday how he was punched in the face and then shot May 17 at Twin Peaks restaurant while rushing to defend a Bandidos president, who became embroiled in an argument with rival Cossacks gang members moments after the Bandidos rode in from Dallas.

Two Bandidos asked 54th State District Judge Matt Johnson to reduce their $1 million bonds at back-to-back hearings Wednesday. Reginald Weathers, 43, of Forney, was successful, but his fellow Bandido, Marcus Pilkington, 36, of Mexia, who has at least four pending felony cases against him in Limestone and Ellis counties, was not.

After hearing testimony from Weathers, who has no criminal record, and arguments from the attorney for both bikers, Adam Reposa, the judge agreed to reduce Weathers’ bond to $250,000.

Reposa said it is unlikely Weathers will be able to post bond, even with the reduction.

Before seeking the bond reductions, Reposa asked the judge to rule on his claim that the men deserve to be released because the boilerplate, identical arrest warrant affidavits used to arrest all 177 bikers fail to allege a legal cause of action.

Based on the vague affidavits, bikers merely eating lunch at Twin Peaks that day were arrested for wearing “patches” and for being associated with a biker club and not based on whether they fired a weapon, got into a fight or helped provoke the gunbattle, Reposa argued.

He said it was not right for everyone to be arrested for the actions of others.

Johnson ruled there was adequate probable cause to detain the bikers.

Weathers testified that he and about 15 other Bandidos from the Dallas area had just pulled into the restaurant parking lot and saw Cossacks lining the patio area. He said he hadn’t even parked his motorcycle before Cossacks yelled at club President David Martinez that he couldn’t park in a particular spot.

Weathers said he felt like the Cossacks were “disrespecting” Martinez, and he rushed over and told them not to talk to his president that way. Suddenly, a Cossack punched him in the face, he said.

He said he put his head down to cover up and defend himself and heard gunshots seconds later. He was being pulled to the ground and was being hit in the face, he said. Later, he was shot in the arm. The bullet passed through his arm, entered his chest and exited the other side, he said.

Prosecutor Brandon Luce asked Weathers if he would jump into any fray to help his biker brothers. Weathers said he would.

“This is 2015. We know violence is not the first answer,” Weathers said. “We are not stupid. We know there are better ways to handle things.”

Weathers said he did not see who fired the first shot because he was fighting with another biker. He remembers hearing the sound of a “double-tap,” or pulling the trigger twice.

After being shot, Weathers ran to take cover behind cars near Don Carlos restaurant, he said. Police arrived quickly and told everyone to get on the ground, he said, estimating the entire incident lasted four or five minutes.

Weathers told Luce he was legally carrying a .40-caliber pistol but did not use it that day. When Luce referred to the Bandidos as a gang, Weathers corrected him, saying he is in a motorcycle club called the Bandidos.

Luce reminded the court that law enforcement considers the Bandidos a criminal gang.

Reposa argued that people, including ex-military personnel, are attracted to biker groups like the Bandidos because they are disciplined and value structure and order.

“I think when you see the videos, you will see some very undisciplined actors,” Reposa said. “That was not this man. He was lawfully carrying a weapon, and he did not discharge it.”

Pilkington’s leg was injured in the incident, but testimony Wednesday did not indicate how he was hurt.

Luce and prosecutor Mark Parker asked Pilkington about his pending assault/family violence, tampering with physical evidence and possession of a prohibited substance in a correctional facility cases in Limestone County; a pending stalking case in Ellis County; a protective order against him; and his 1999 conviction for marijuana possession in Navarro County.

In related matters, the National Coalition of Motorcyclists announced in a press release that it had hired a former Texas Ranger to conduct an investigation into the shooting at Twin Peaks.

Waco police Sgt. W. Patrick Swanton said his agency has “no problem at all with that,” but added that the former Ranger, who is not named in the press release, would not be afforded access to any law-enforcement evidence gathered in the case.

“We have no problem with anybody looking at this,” Swanton said. “We have nothing to hide. Obviously, we are going to maintain the integrity of our investigation, so we would not necessarily share information with an outsider. We continue to share evidence with the FBI, ATF, TABC, Texas Rangers and DPS’ CID team. They are all working on this case with us.”

McLennan county commissioners Tuesday began what will be a monthslong discussion to assemble the fiscal year 2016 budget, which includes how t…