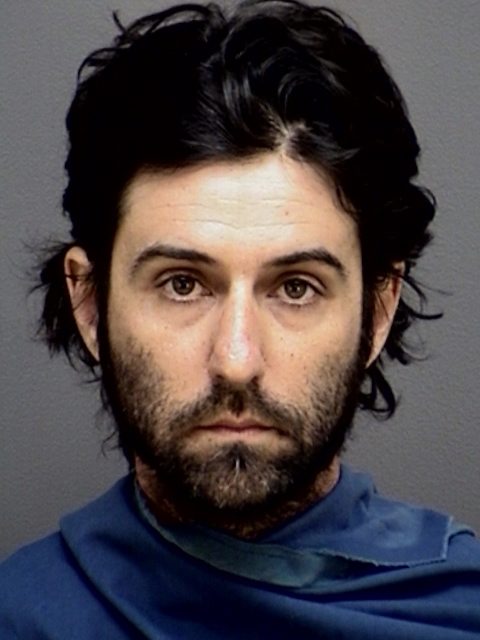 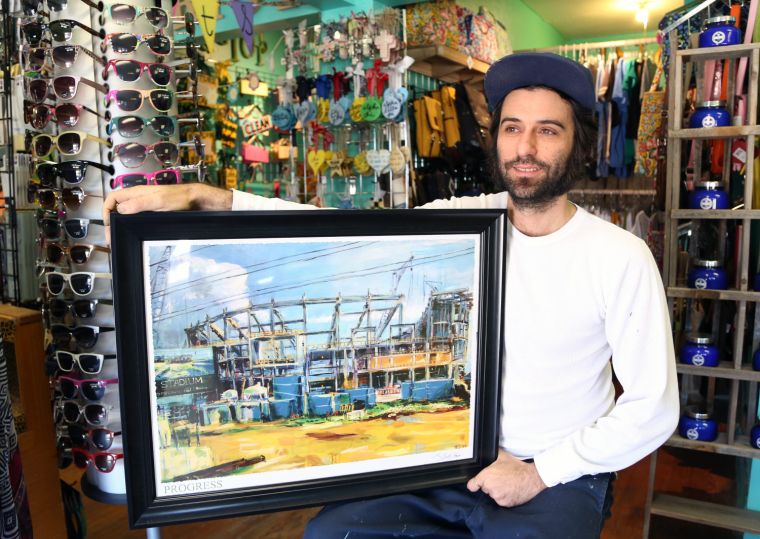 Local artist Joe Magnano holds up a reprint of a 2013 painting that captured Baylor’s McLane Stadium under construction. Magnano was arrested Tuesday on charges that he vandalized the Prada Marfa art installation northwest of Marfa, which was covered in blue paint and pictures of the TOMS shoe logo earlier this month.

Local artist Joe Magnano holds up a reprint of a 2013 painting that captured Baylor’s McLane Stadium under construction. Magnano was arrested Tuesday on charges that he vandalized the Prada Marfa art installation northwest of Marfa, which was covered in blue paint and pictures of the TOMS shoe logo earlier this month.

A Waco-based artist was arrested in the vandalism of the Prada Marfa art installation northwest of Marfa, which was covered in blue paint and pictures of the TOMS shoe logo earlier this month.

Joseph Magnano was arrested Tuesday in Wichita County by a state trooper who learned of a criminal mischief warrant issued out of Jeff Davis County for the offense, Department of Public Safety Trooper Elizabeth Barney said.

He was booked into the Wichita County Jail the same day and released Wednesday evening after posting a $20,000 bond, according to a jail clerk.

The Prada Marfa is a sculpture designed to resemble a Prada store that was installed, and later inaugurated, in 2005.

The door to what appears to be the front of a store is not functional, and Prada wares can be seen through windows at the front of the sculpture.

This is the second time the exhibit has been vandalized, with the other being in 2005, days after the sculpture was erected.

The Tribune-Herald reported in January that Magnano came to Waco last August to help Alicia Hart at her store, Harts N Crafts, at 1125 S. Eighth St.

He studied at the San Francisco Art Institute, and she thought his painting abilities would be perfect for the store’s 2014 merchandise.

Hart creates a product for her store to commemorate each year and, this year, Magnano painted Baylor’s new McLane Stadium under construction.

After the project was complete, it was printed as an 18-by-24-inch poster with Magnano’s signature and sold for $20 each.

“I like the feeling of a work in progress,” Magnano said about his painting at the time. “No one will see it at that stage ever again.”

Hart was unable to be reached for comment late Wednesday.