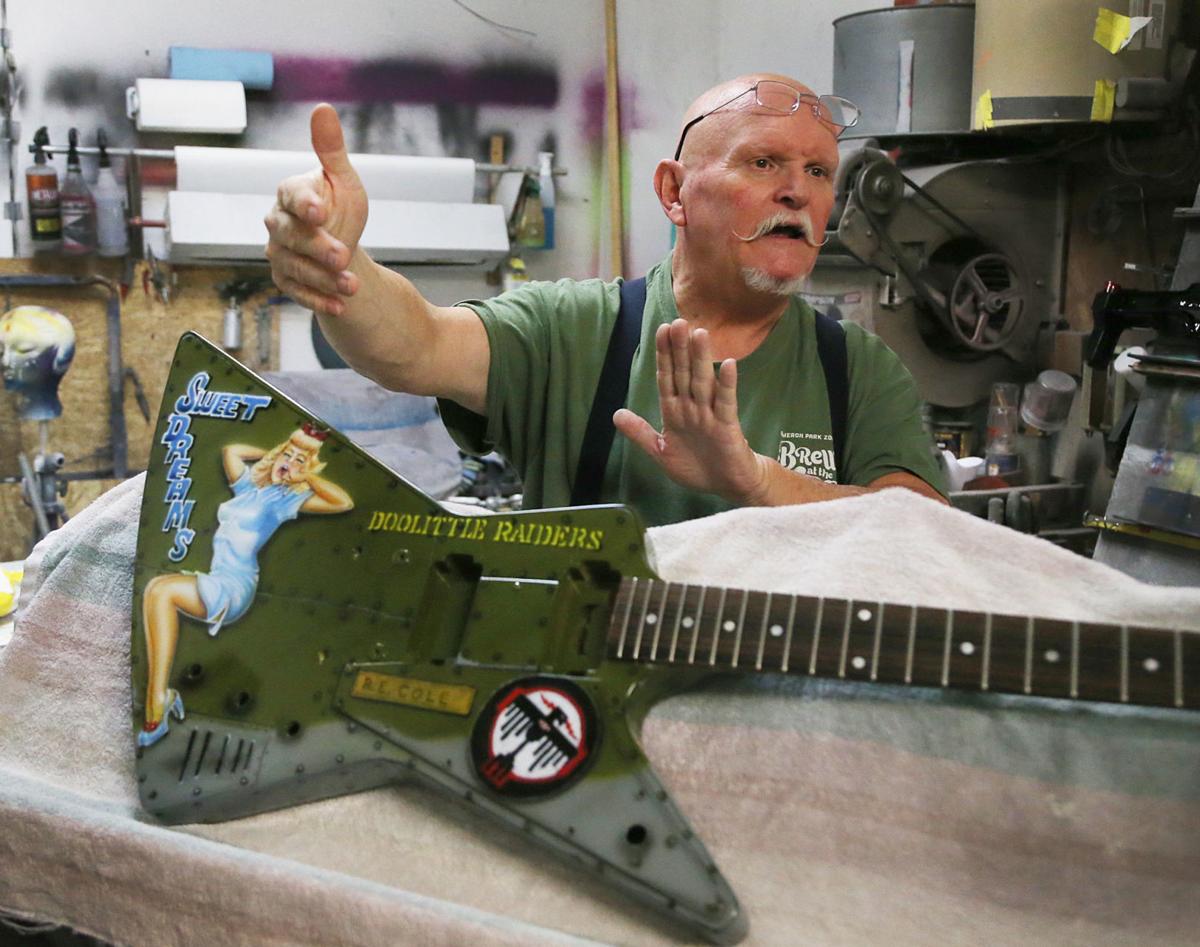 At his Hewitt workshop, airbrush artist Von Otto describes his working process and a guitar he painted that honors Richard Cole, who was the last surviving Doolittle Raider when he died in April in San Antonio. Relatives of Cole’s live in McLennan County. 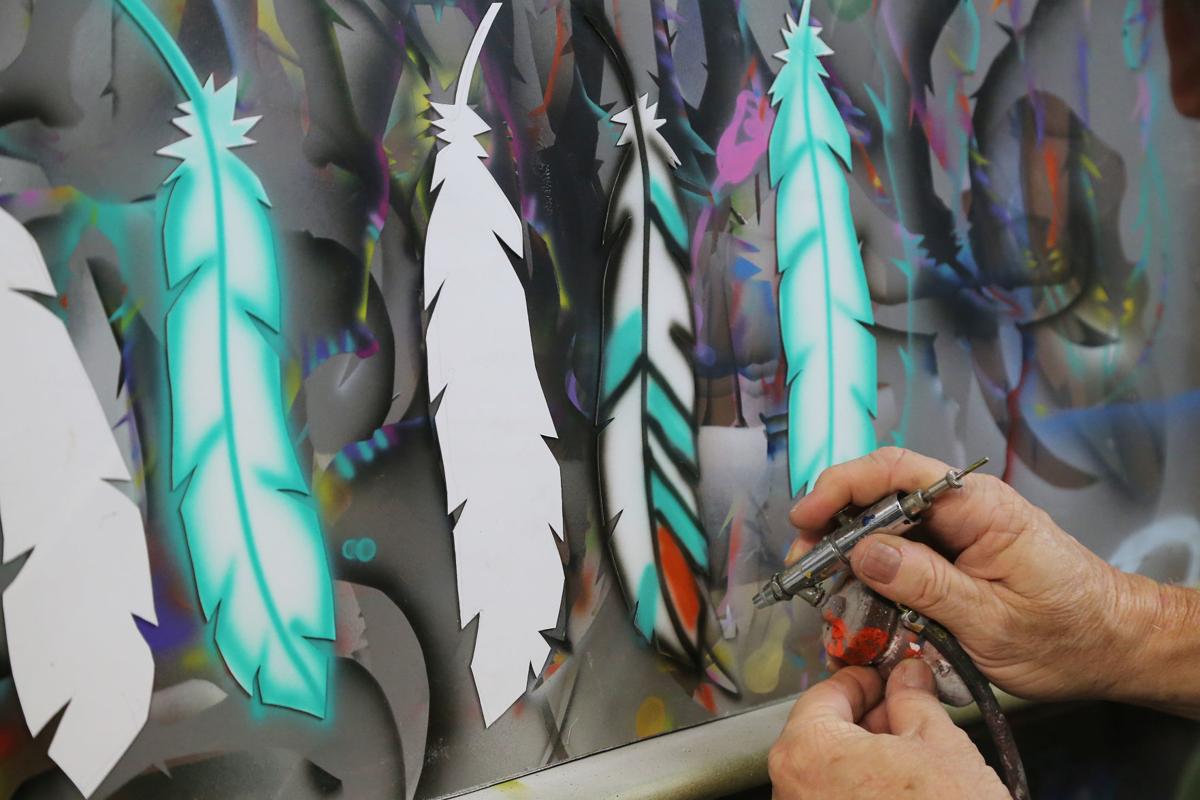 Airbrush artist Von Otto paints magnetic feathers at his Hewitt workshop Friday. Otto has more than 43 years of experience as an airbrush artist. 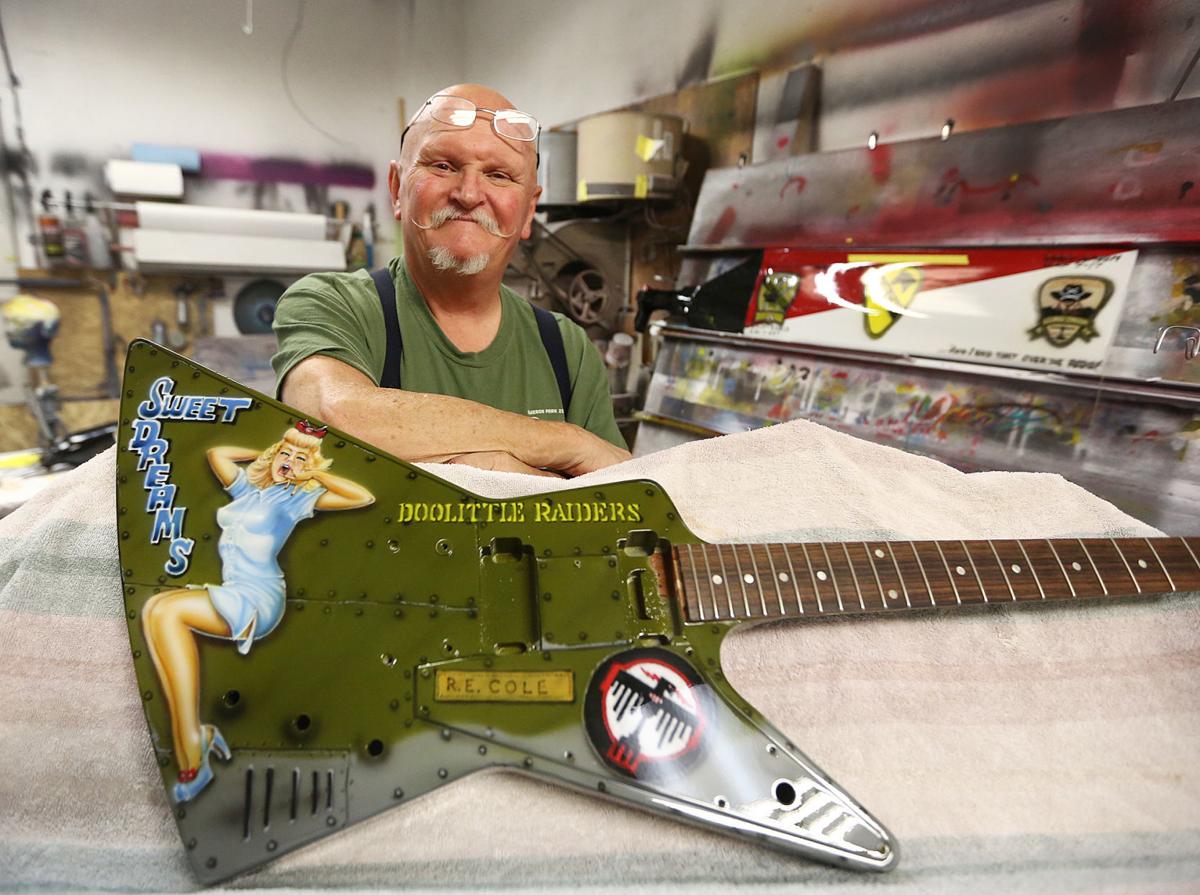 At his Hewitt workshop, airbrush artist Von Otto displays a guitar he painted that honors Richard Cole, who was the last surviving Doolittle Raider when he died in April in San Antonio. Some of Cole’s relatives live in McLennan County. 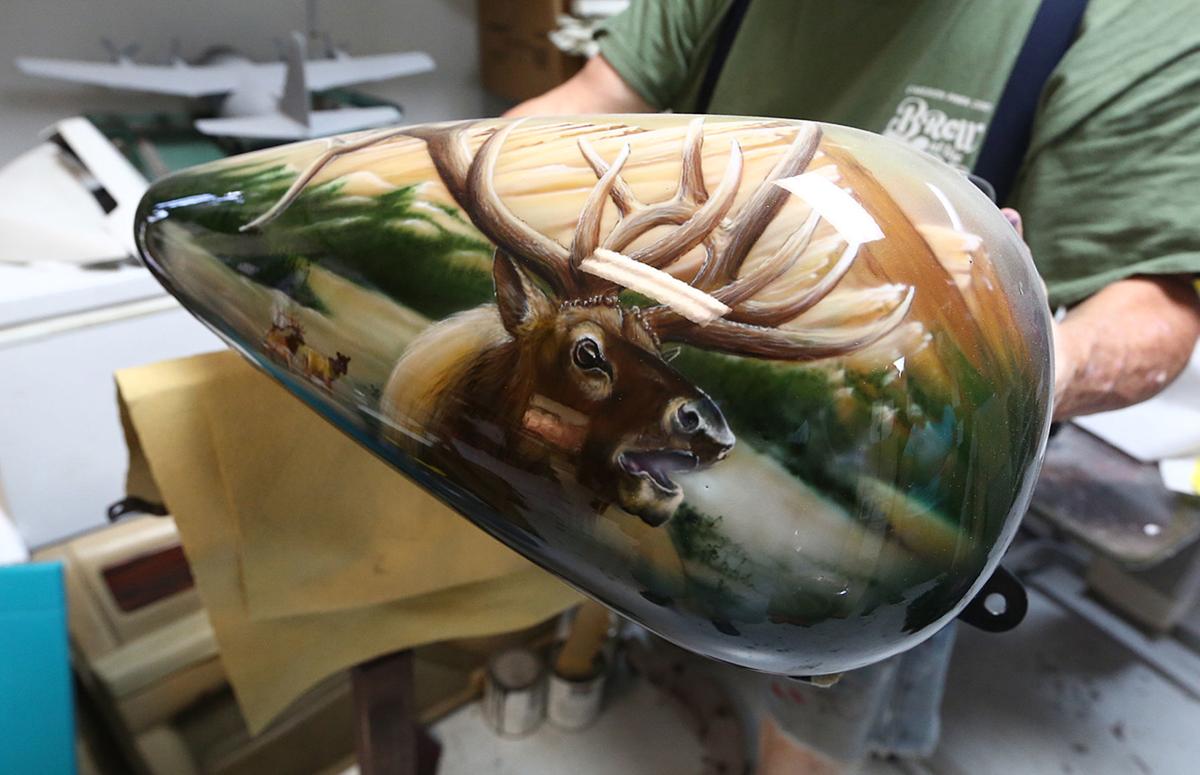 Local airbrush artist Von Otto shows his work at his workshop in Hewitt on Friday. 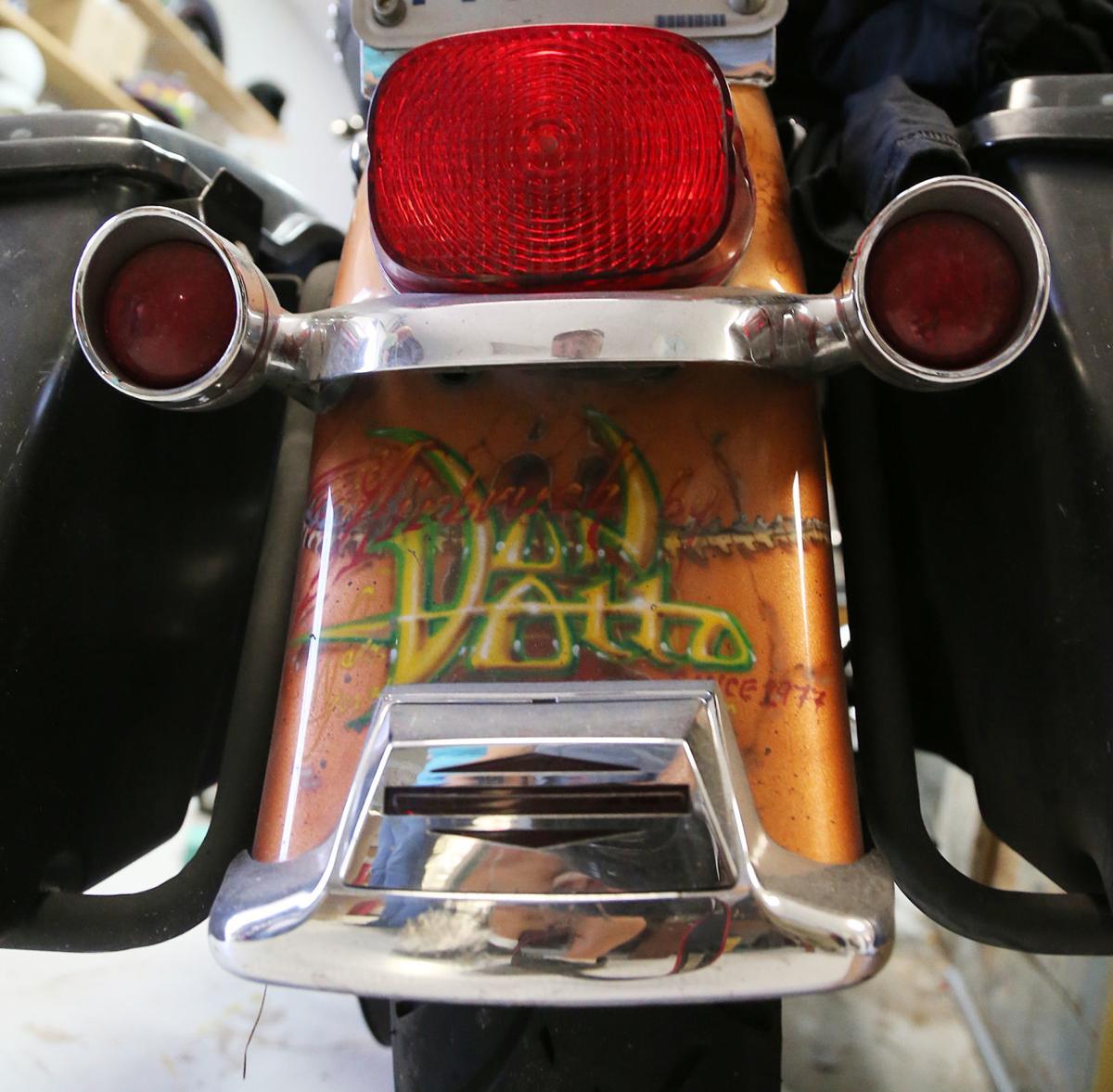 Von Otto left his mark on the back fender of the motorcycle he plans to ride to Seattle next year, stopping to paint along the way. 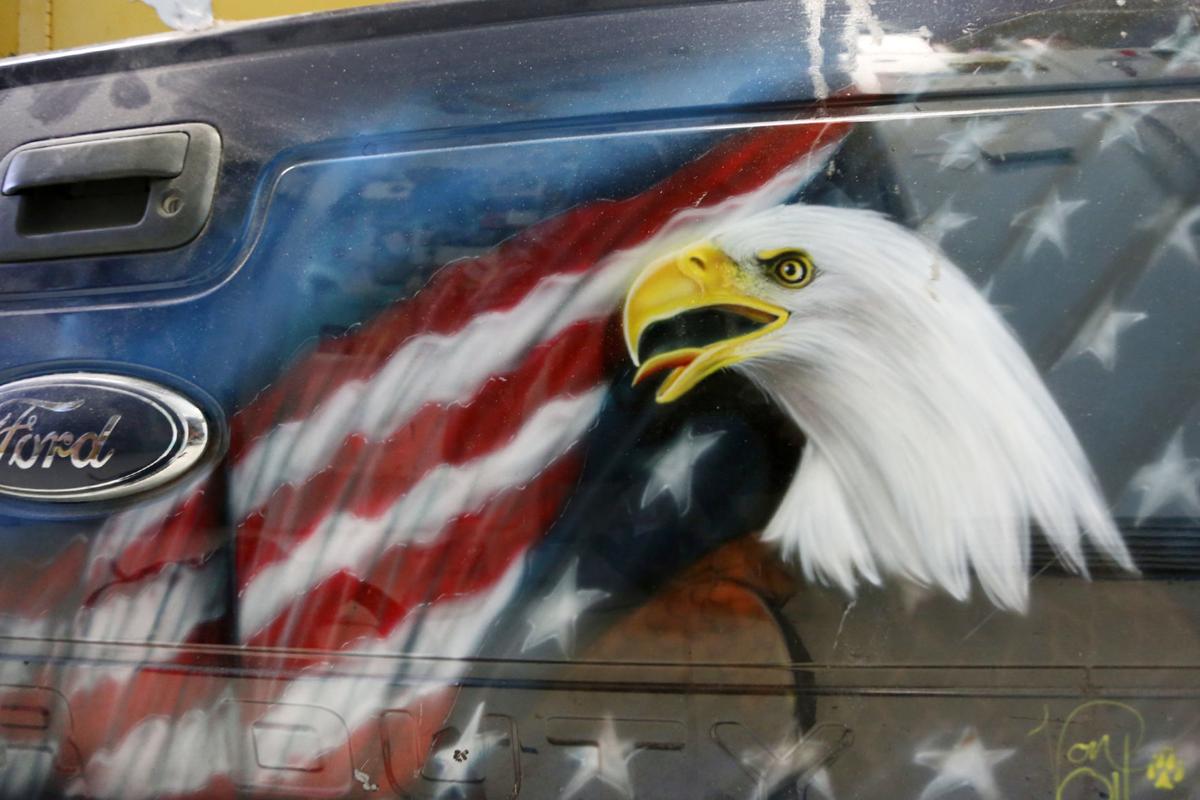 A pickup’s tailgate shows an example of Vot Otto’s work.

With the steady hand of a veteran artist, Von Otto moves his airbrush down the side of a magnetic feather, embellishing the blank form with ease.

“Then I’ll put someone’s name on it and they can hang on a refrigerator,” Otto said. “I don’t use stencils, because I’ve learned how to make things like over-spray fit in the design.”

For 43 years, he has made a career of his freehand airbrush artistry, now working from a home base in Hewitt. He has painted upward of 50,000 items, from guitars and motorcycle helmets to trailers and cars, even a casket.

“Under my breath, sometimes I’m saying ‘I hope I can do that,’ because there have been a few times that I was hoping I could get it,” the 65-year-old said inside his workshop Friday. “Sometimes you’ll have a vision, but something will challenge you and then it bends that vision so you can fight through it to get to the end.”

Otto has lived in McLennan County since 1989 and has long had little company as far as other professional freehand airbrush artists locally. His work appears in the McLennan County Courthouse, local veterans organization facilities and the Cameron Park Zoo.

“He is such a talented guy and he does animals better than any artist I’ve ever seen,” interim zoo director Johnny Binder said. “He captures the faces and eyes of animals, helping us with our graphic panels. … Just in our herpetarium alone, he has done over 5,000 square feet of murals and he did those in 1997, and they look as fresh and brand new today as the day he did them.”

Otto, an Alabama native, moved to McLennan County after serving in the U.S. Air Force from 1973 to 1977. He served as a weapon mechanic during the Vietnam War and although he hoped to work in the field of photography, he was shipped to Iceland to maintain aircraft weapons systems.

“That and a combination of not getting into the career field I really wanted got me going into my artwork,” Otto said.

During his time stationed overseas, his sister sent him liquid embroidery pens. He started drawing on clothes for fun and would paint on the walls of the noncommissioned officer club.

“One of the guys who was from California said, ‘Man, when you get back to the states, you need to get an airbrush,’ ” Otto said. “Other than being around an airbrush in chopper shops before I went overseas, I didn’t know how to use an airbrush.”

When he got back to Mobile, Alabama, Otto went to a mall and bought an airbrush kit. With no guidance, he started to hone his craft working on colorful seaside scenes, he said.

“Most schools, most teachers and professionals, want you to go at it the way they did it,” Otto said. “To me, I can tell right off the bat if someone has been to school, because it looks too cookie-cutter. I developed my own style and you will never see the same design twice of my work.”

His move to McLennan County came when a local trucking company hired him to paint on the sides of its trucks. The company was sold, but Otto had found his place locally as an artist.

In his 43-year career, Otto has worked on automobiles and a variety of other pieces, never using anything but his vision and maybe a photo as inspiration. In addition to the scores of local individuals and organizations, Otto’s biggest-name clients include the United States Air Force Thunderbirds and Evel Knievel.

“It was funny, because I passed an 18-wheeler that had a design on the back of it and I thought, ‘That’s pretty good.’ But it passed me too fast, and I couldn’t tell who the artist was,” he said. “I followed it from Lorena to Bagby until I realized it was one of my works I had done years ago. That was real exciting, because it was like seeing it for the first time again, like everyone gets to see it.”

Otto said he will embark on a lengthy motorcycle trip to Seattle next year. He said he plans on making many stops and setting up at Kampgrounds of America locations so he can work along the way.