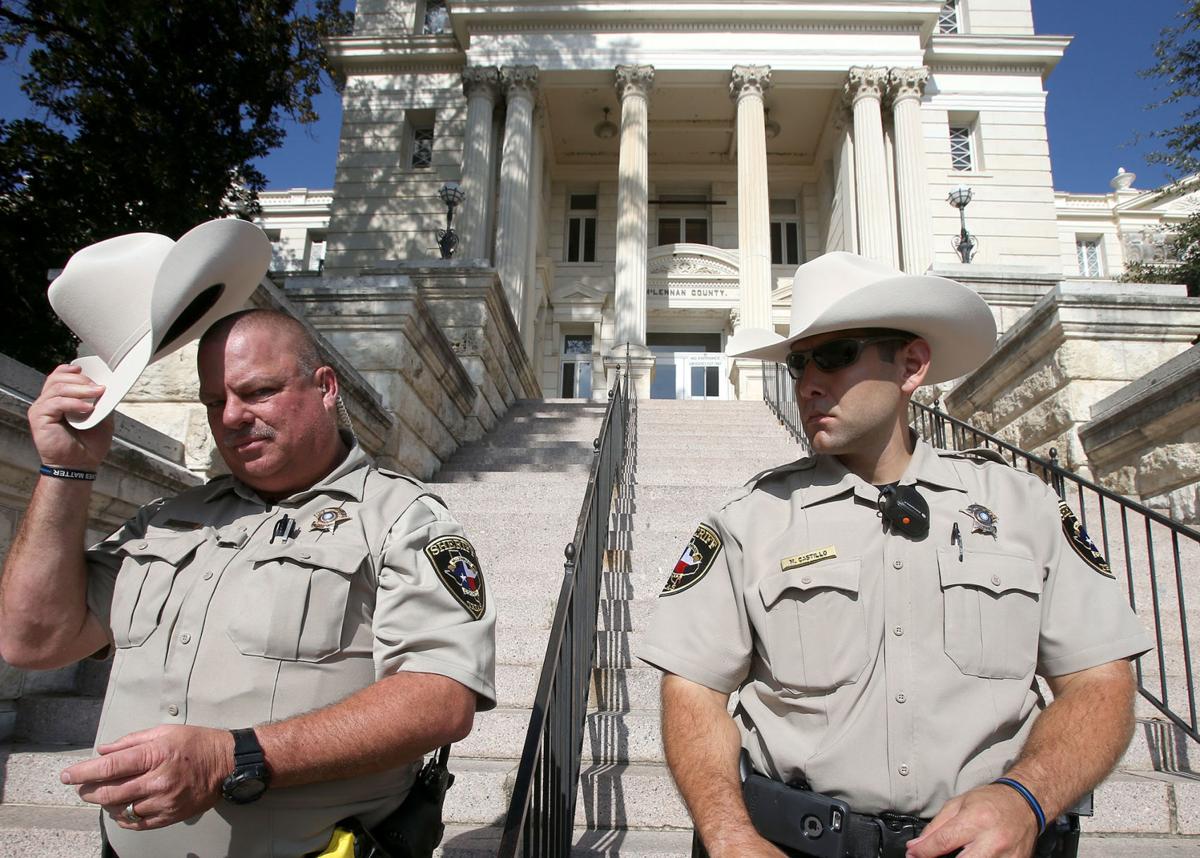 McLennan County Deputy Glenn Kennedy (left) places his hat on his head as he and Michael Castillo stand outside the McLennan County Courthouse. The sheriff’s office bought 290 cowboy hats to add to deputies’ uniforms. 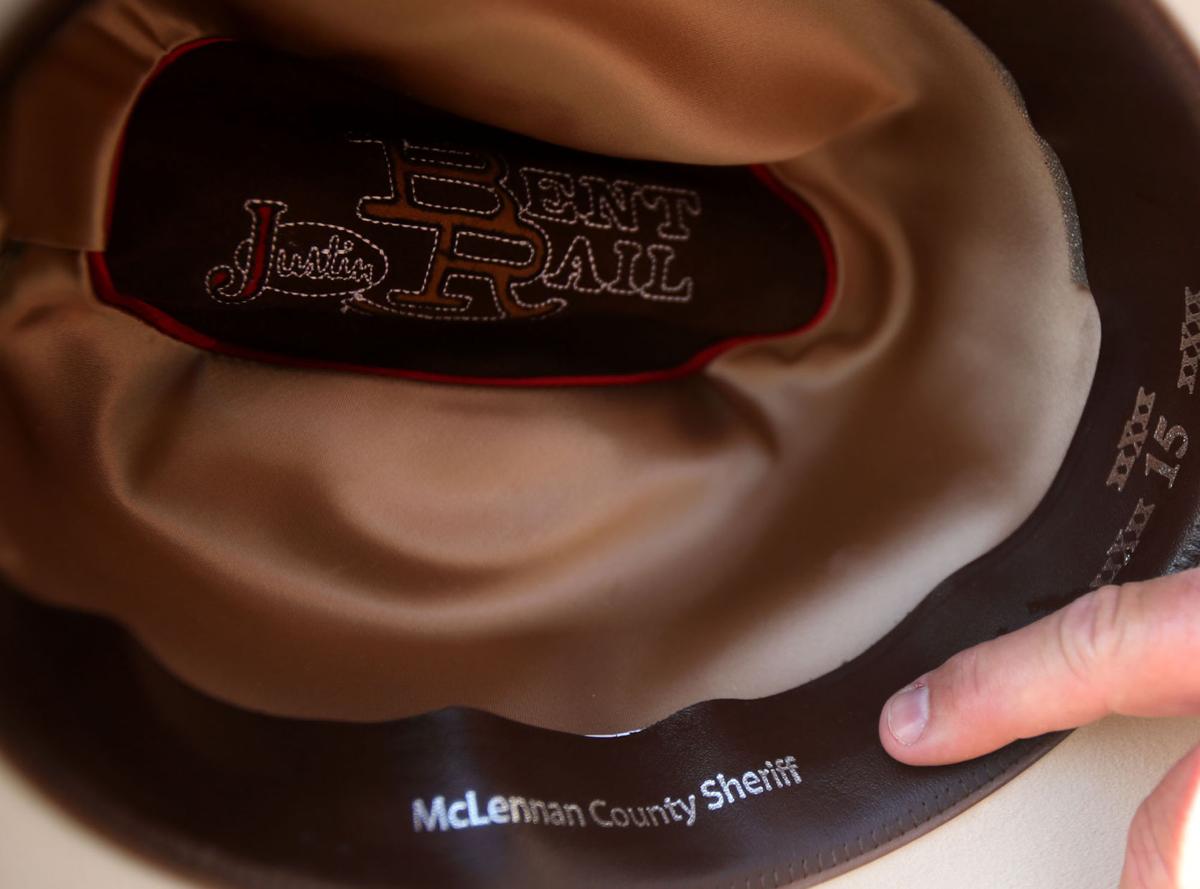 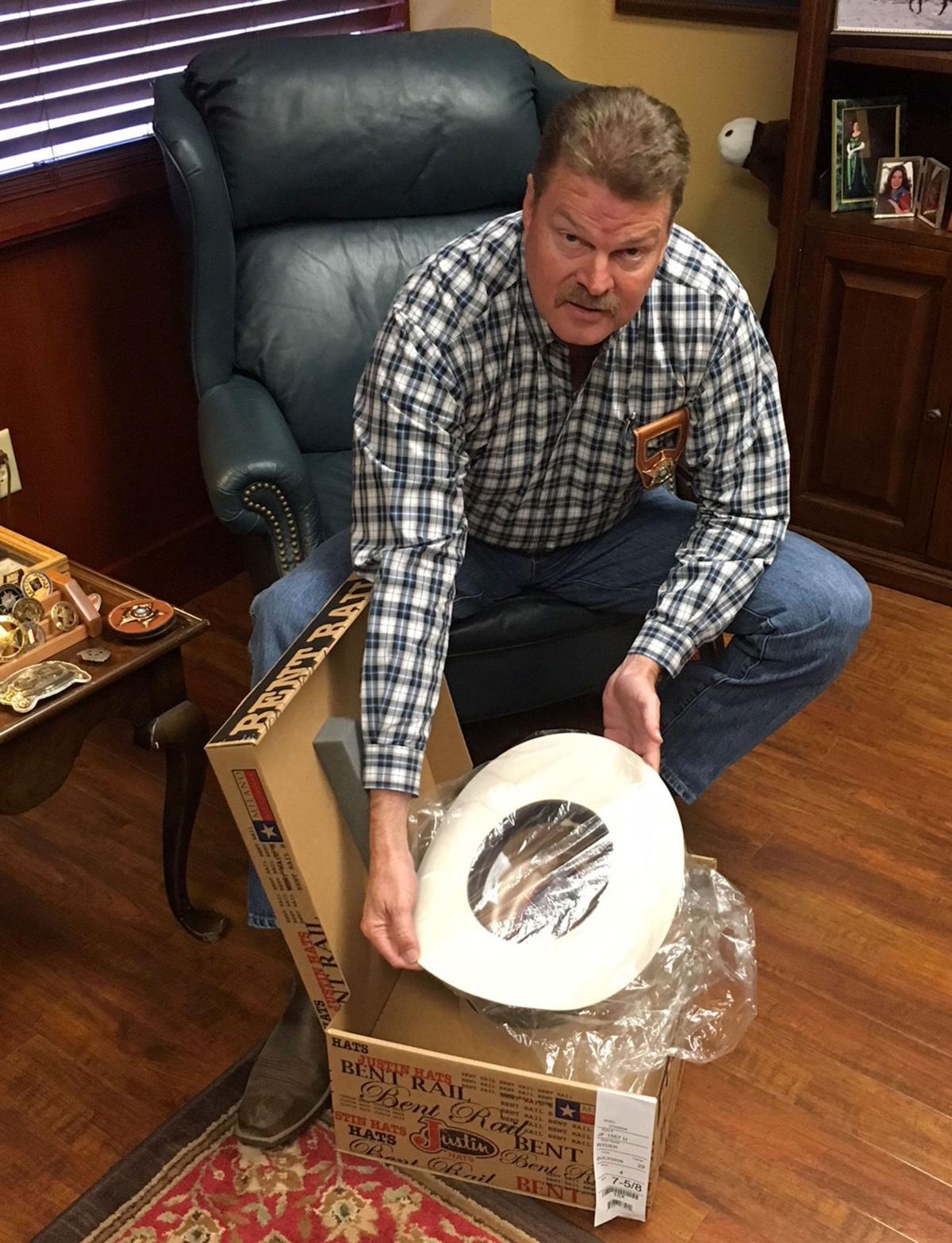 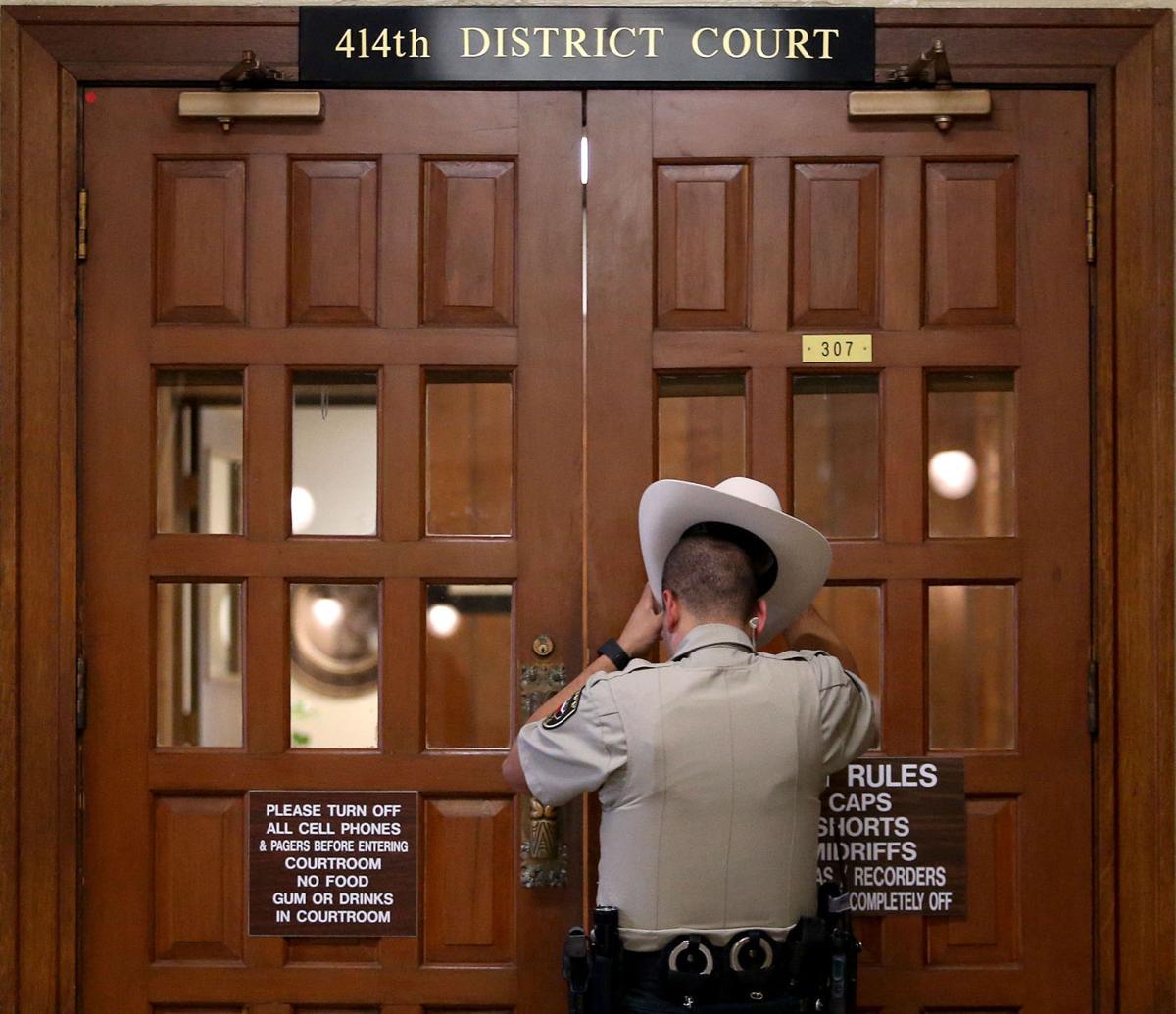 A McLennan County sheriff's deputy removes his hat before entering a courtroom in the McLennan County Courthouse. Along with two new hats for their uniform, deputies recently got a four-page memo on hat care and etiquette. 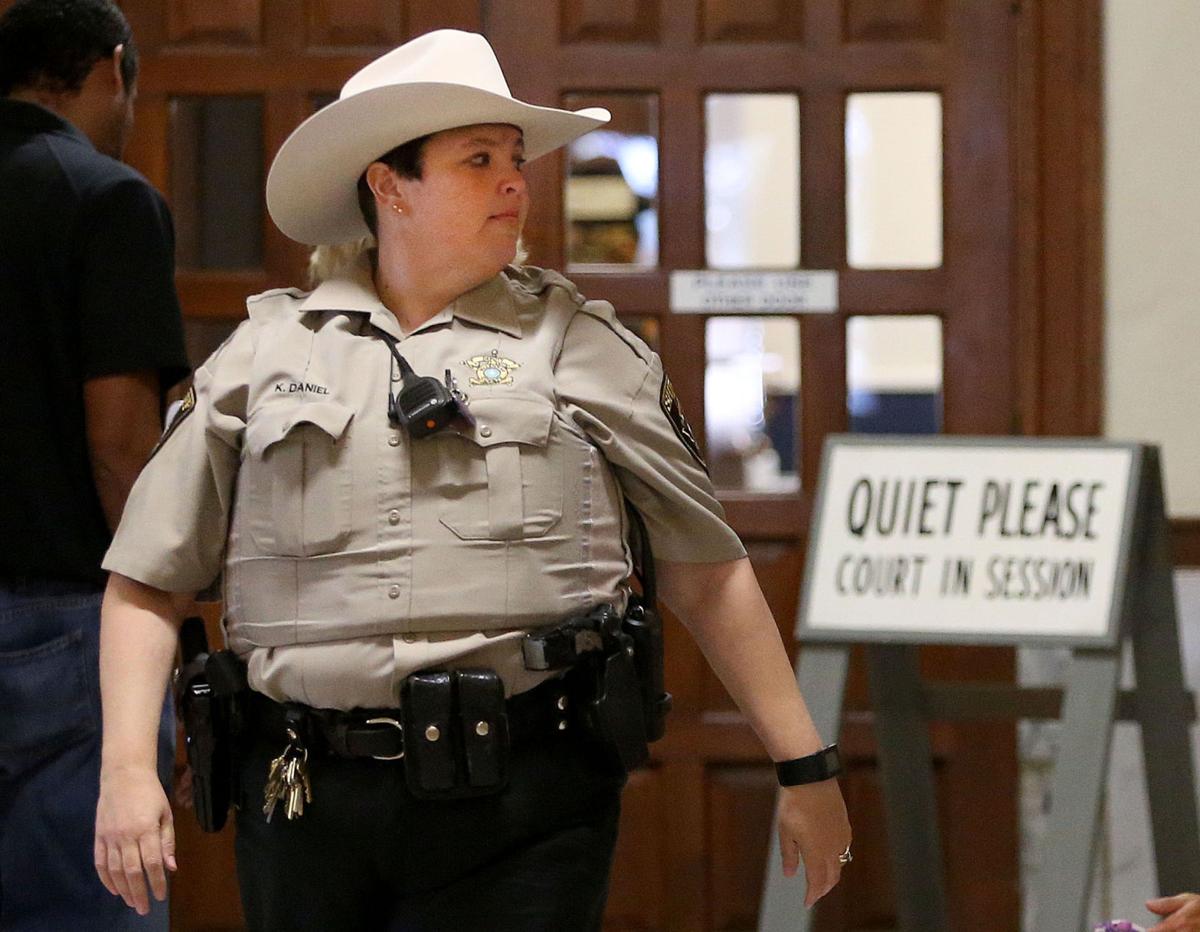 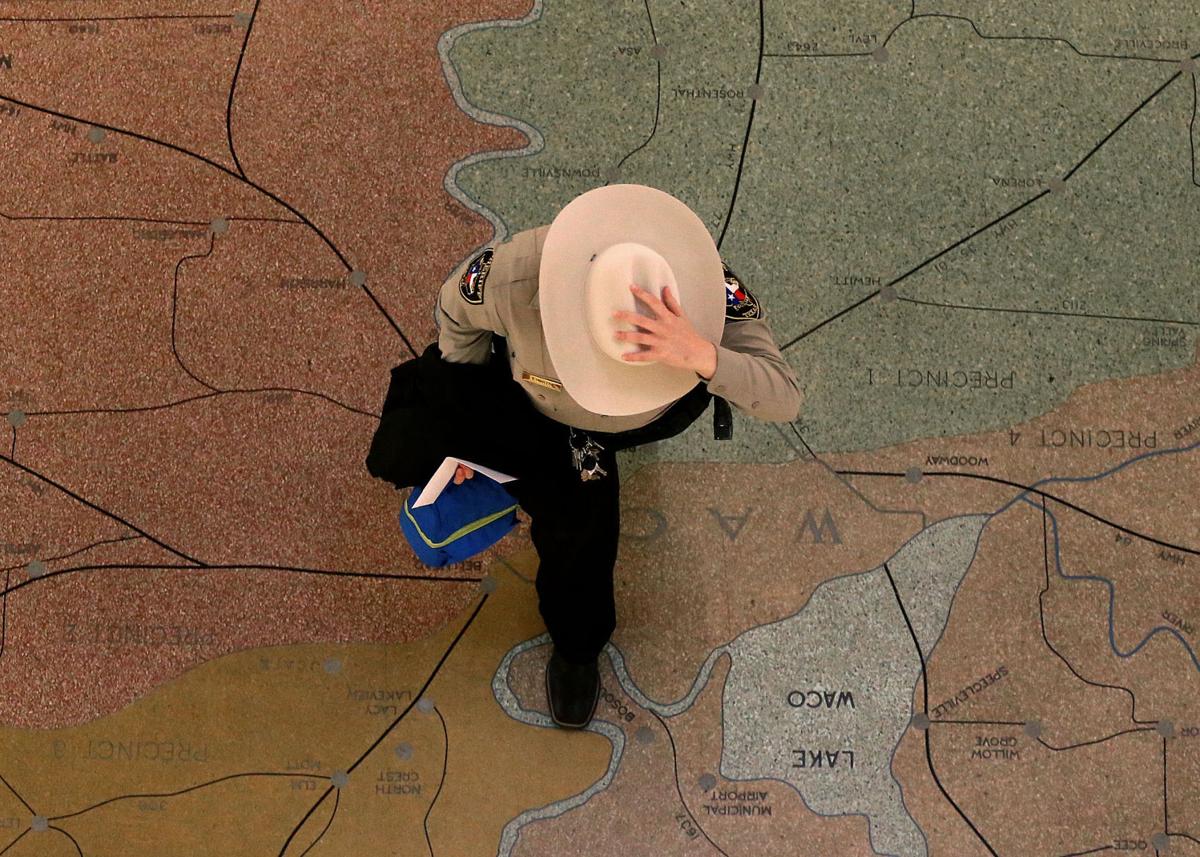 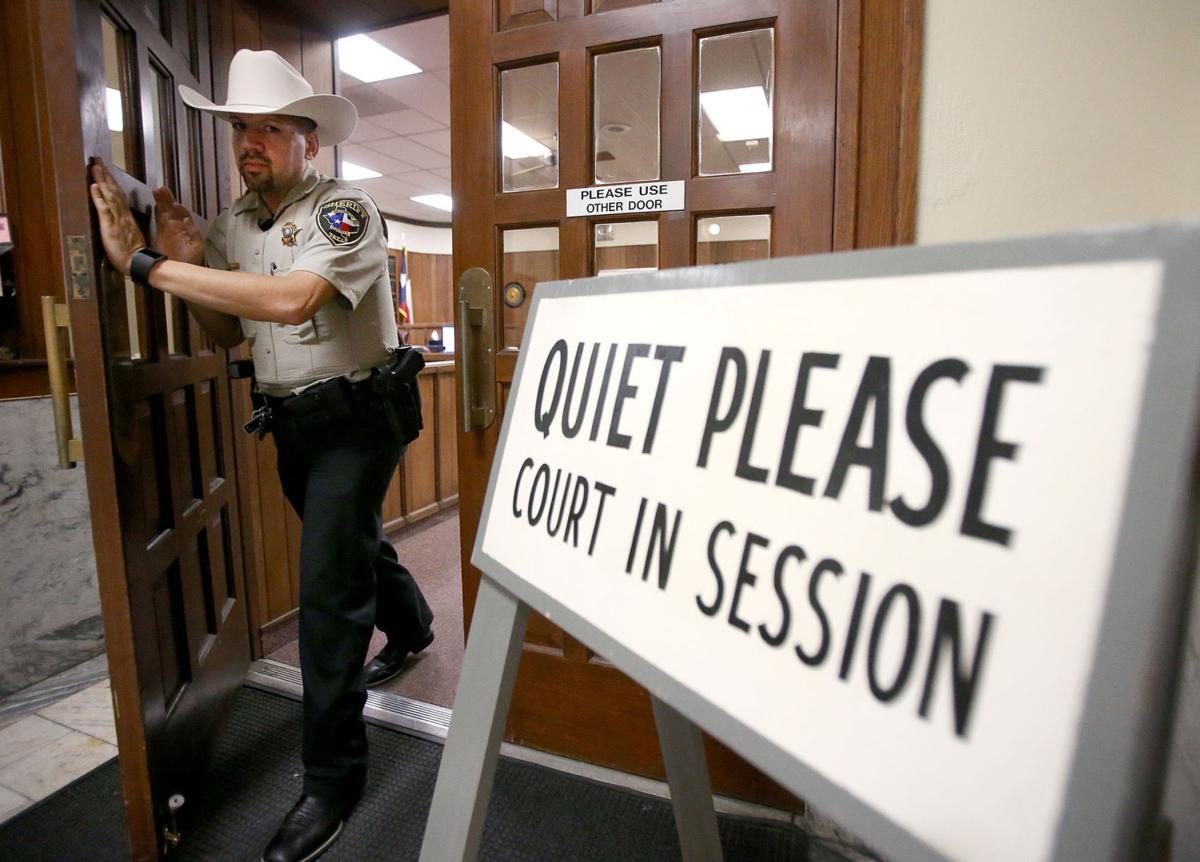 McLennan County Deputy Glenn Kennedy (left) places his hat on his head as he and Michael Castillo stand outside the McLennan County Courthouse. The sheriff’s office bought 290 cowboy hats to add to deputies’ uniforms.

A McLennan County sheriff's deputy removes his hat before entering a courtroom in the McLennan County Courthouse. Along with two new hats for their uniform, deputies recently got a four-page memo on hat care and etiquette.

Legendary football coach and Texas icon Bum Phillips didn’t wear his cowboy hat in the Houston Astrodome because his mother taught him not to wear a hat indoors.

McNamara recently spent $22,400 on 290 cowboy hats for his deputies to wear everywhere they go, except in courtrooms or church. With deference to Bum’s mama, McNamara’s armed deputies will keep their hats on in the courthouse, he said.

Courthouse deputies, whose numbers have increased the past month during the trial of Bandidos Dallas chapter President Jacob Carrizal, all are sporting new Justin Bent Rail 15-X western hats around the courthouse, as are their colleagues on patrol in rural areas of the county.

McNamara and Chief Deputy David Kilcrease said they have been considering making the silver, Cattlemen block-style hats a part of deputies’ uniforms for some time.

“I think a hat personifies a Texas sheriff,” McNamara said. “It is just like all DPS troopers wear hats, Texas Rangers wear hats, it’s a Texas thing. When my brother and I first went with the U.S. Marshals Service, our dad (also a deputy U.S. marshal) required us to wear hats.”

McNamara, who reflects the old-school Western lawman, said he is even putting aside his traditional Stetson in favor of the new Justin hats so he and his deputies will present a unified front.

When Jeff Bridges needed advice on portraying an authentic Texas lawman for the 2016 movie “Hell or High Water,” Bridges turned to McNamara for a tutorial in Wyatt Earp 101. The most important thing McNamara told him was what kind of hat to wear so he would look the part. He also told him what kind of pistol to carry and how to wear a badge, among other things.

Kilcrease said he searched hat companies statewide to get the best deal he could find. The sheriff’s office did not spend taxpayer money for the cowboy hats. It used money from the office’s asset forfeiture fund, proceeds seized and forfeited from alleged lawbreakers and used for law enforcement purposes.

The office bought 145 felt hats made from beaver fur at $130 each and 145 straw hats for $24.50 each from the Milano Hat Co. in Garland, according to county records. Kilcrease said the retail price for the same felt hat would be about $200.

“The tradition of a sheriff wearing a hat is huge,” Kilcrease said. “I’ve had people from all over the world approach me and wanted to get a picture of a deputy sheriff with a hat, looking like they expected a traditional deputy sheriff to wear in the state of Texas. They do expect to see you in a hat. This is what the public expects to see, and this sheriff upholds the good traditions of law enforcement.”

“The image of a Texas sheriff is a hat, a badge and a gun,” McNamara said.

With each hat, McNamara and Kilcrease passed out a four-page memo about “cowboy hat etiquette” taken from the Internet. Kilcrease said deputies will be given instructions about how to care for and maintain their new hats, when to wear them, when to take them off and when to tip them.

Deputies will wear the felt hats in the winter months and the straw hats in warmer months.

On Wednesday, deputies broke out plastic hat covers to protect their new headgear from the rain.

“Believe it or not, it is easy to damage a felt hat, and also a straw hat,” Kilcrease said. “People don’t understand that in the heat of summer, it only takes 30 minutes to damage a felt hat left in a car. It is all repairable, but that is something they need to know and they will be getting instructions in all of that.”

Courtroom deputies have already sought permission from at least one judge to install hat racks in the courtroom to give them a place to hang their hats. McNamara said McLennan County Judge Scott Felton, who is known to sport a cowboy hat and boots, had county workers install hat racks in the commissioners’ courtroom a couple of years ago because of the number of deputies, troopers and others stuck with their hats in their laps during two-hour meetings.

“If more people catered to hat-wearers, imagine how many more people would wear them,” Kilcrease said. “Hat racks used to be something we saw everywhere.”

Felton said he likes the new look of the sheriff’s department, adding that besides hats having a purpose, especially in colder weather, it brings more uniformity to the office.

“They sure do dress a man up,” Felton said. “I think it is very appropriate. We are right in the heart of Texas, and it is part of our culture. Sometimes I feel bad not having a hat and boots on, so I try to wear them as much as I can.”

These rules for wearing a cowboy hat are included in a four-page memo Sheriff Parnell McNamara passed out to his deputies who received new hats as part of their uniforms.

1. Always remove your hat when you enter a place where people live except when deputies are on an official call. Deputies must keep their hat on. It's also fine to keep it on when you enter a public building like a bank or store. Exceptions are churches and courtrooms.

2. The first time you meet a lady, take your hat off when you say howdy. After that, it's fine to tip your hat to her.

3. Never let your hat touch your bed. It's bad luck.

4. Rest your hat on the crown. The crown will hold its shape better than if you rest it on the brim. Also, if luck falls your way, it might land in your upturned hat.

6. Never tip your hat to another man. It's like calling the fellow a girlie-boy.

7. Never show the inside of your hat while you're holding it. Hold it against your chest or your leg.