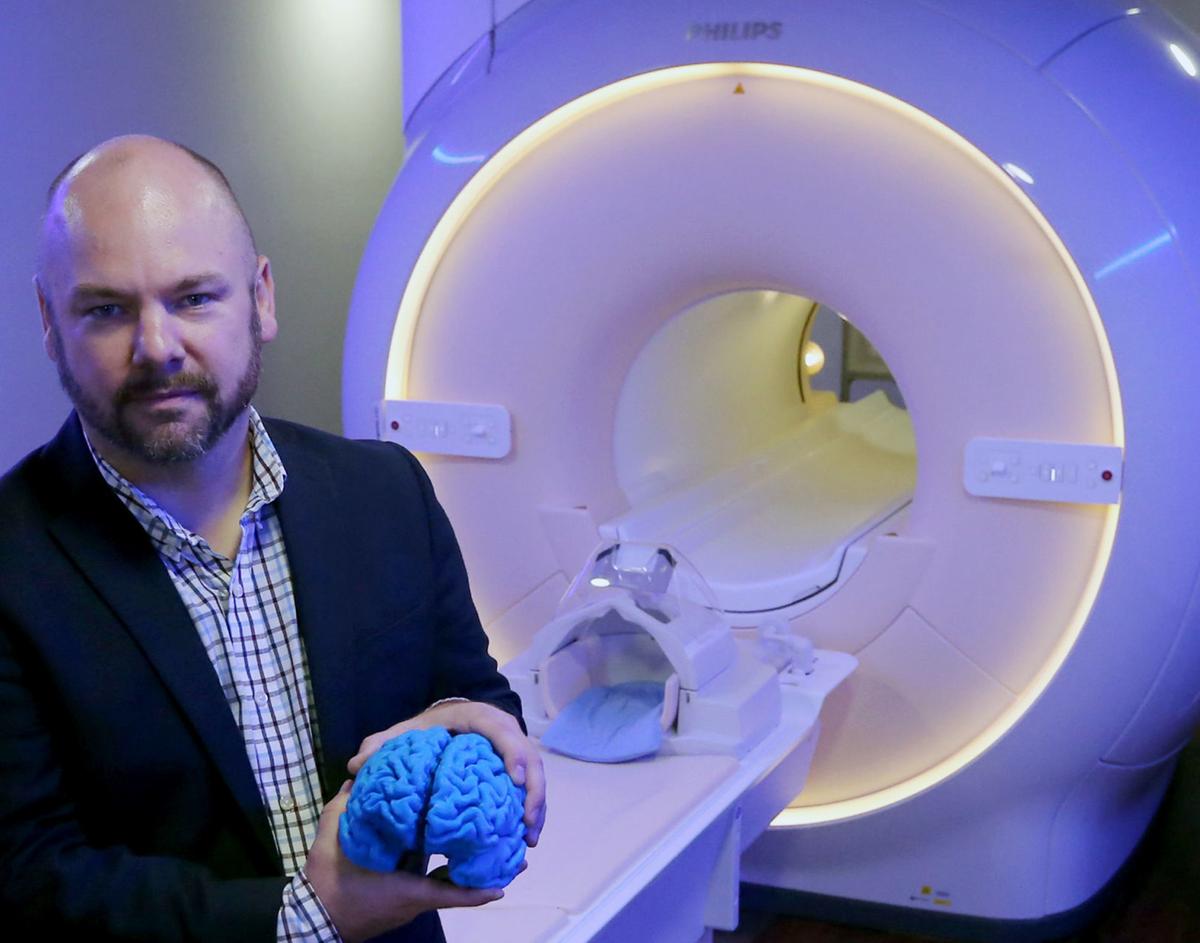 Steven Nelson, chief of the neuroimaging core at the Doris Miller VA’s Center of Excellence for Research on Returning War Veterans, holds a 3D image of a brain in front of an MRI machine at the center. 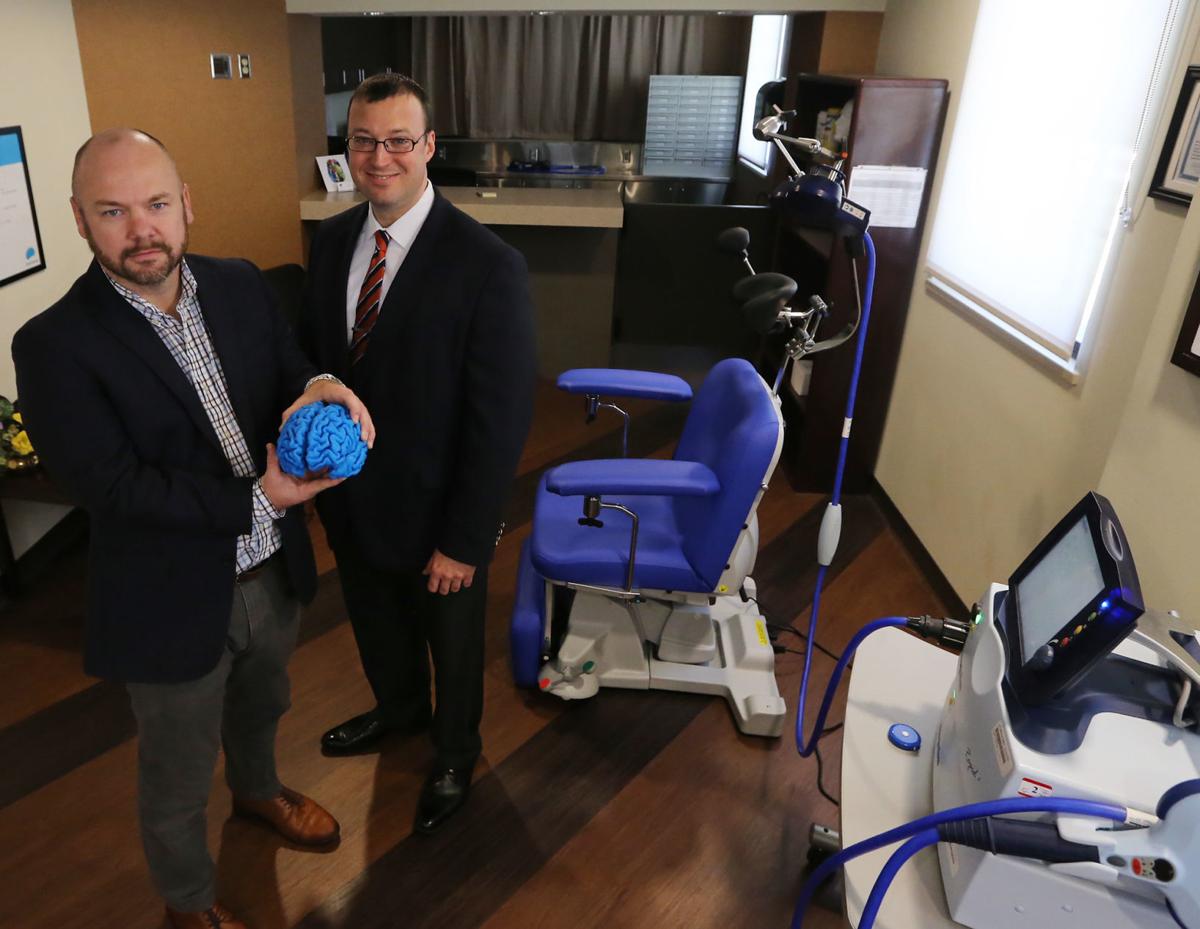 Neuroimaging core chief Steven Nelson (left) holds a 3-D image of a brain with acting director Richard Seim in a room at the Doris Miller VA's Center of Excellence. Both will take part in a two-day conference in Waco starting Thursday.

Steven Nelson, chief of the neuroimaging core at the Doris Miller VA’s Center of Excellence for Research on Returning War Veterans, holds a 3D image of a brain in front of an MRI machine at the center.

Neuroimaging core chief Steven Nelson (left) holds a 3-D image of a brain with acting director Richard Seim in a room at the Doris Miller VA's Center of Excellence. Both will take part in a two-day conference in Waco starting Thursday.

Some of the nation’s leading experts on advanced treatments for PTSD and traumatic brain injury will combine their areas of expertise this week at a medical think tank conference in Waco.

The two-day conference, which starts Thursday, will be at the Doris Miller Department of Veterans Affairs Medical Center and feature 35 researchers who will merge their knowledge in different scientific disciplines, including biochemistry and neuroscience, in an effort to improve current treatments.

Richard Seim, acting director of the Center of Excellence at the Doris Miller VA, said the conference “should help put Waco on the map.”

“Waco is becoming a hub of neuroscience,” Seim said. “This really could revolutionize how we are treating PTSD. What we are doing is taking the nation’s experts on MRI, TMS and on biochemistry and putting them all together to figure out how we can incorporate all three technologies to improve biological-based treatments for PTSD.”

The Center of Excellence is one of only a handful of veterans’ facilities with a TMS device, or transcranial magnetic stimulation. TMS uses a powerful electromagnet to send pulses of current to the front of the brain, causing cells to activate spontaneously, Seim said.

It is hoped the researchers can combine their talents to more specifically locate the area of a person’s brain that is affected by post traumatic stress disorder so TMS operators will know the best area to stimulate. Unfortunately, not everyone’s brain is affected the same by PTSD, Seim said.

“We want to find out how to advance this treatment and how to make this science more specific,” Seim said. “One person’s PTSD is different from others. We want to determine where is the best spot in this particular individual.”

Some of those expected to attend the conference include Paul Holtzheimer, deputy director for research at the National Center for PTSD; Erin Bigler, a neuroscience professor at Brigham Young University and a pioneer in the field of traumatic brain injury; Jerome Yesavage, associate chairman of psychiatry and professor of neurology at the Stanford University School of Medicine; and Jonathan Lifshitz, director of neurotrauma research at Phoenix Children’s Hospital.

“They are all innovators in various fields of neuroscience, and their specialties all constellate around traumatic brain injury and innovative treatments for PTSD,” Seim said. “We are taking the very best scientists in the field of neuroscience, and some specialize in neuroimaging, and looking at the function of the brain. There are also people who specialize in therapy.”

The Center of Excellence in Waco has treated about 100 patients in the two years it has been using TMS. Seim said it has been successful with veterans suffering from chronic depression and PTSD. By stimulating the part of the brain affected by PTSD, it can help reduce depression and give patients greater control of their emotions, he said.

In many cases, that also helps veterans reduce the number of medications they take.

One combat veteran who suffered from PTSD for 20 years, with symptoms of avoidance, depression, nightmares and anxiety, underwent the TMS therapy and reduced his number of medications from three to one, Seim said.

The conference is being held during National Suicide Prevention Month, and the Central Texas Veterans Health Care System is continuing efforts to increase awareness of the nationwide problem, particularly among veterans.

According to a comprehensive VA analysis of veteran suicide rates from 2001 to 2014 released two years ago, an average of 20 veterans and service members died from suicide each day. The study found that in 2013 or 2014, six of the 20 were patients of the VA health care system.

Also, the study showed that veterans accounted for 18% of all suicide deaths among U.S. adults, while veterans constitute 8.5% of the population.

“We are not only guided by the statistics, but also the veterans we see each and every day in Central Texas,” said Michael Kiefer, director of the Central Texas Veterans Health Care System. “This year, we continue our commitment to find the 14 veterans who are not signed up with VA for their health care before they take their own lives. It’s up to each of us to find those who need support — a simple phone call, a visit or encouraging a veteran to sign up for VA health care.”

Seim said treating PTSD, depression and, in turn, suicide prevention is the number one priority with the VA. Those at the conference are trying to improve treatments that could lead to fewer suicides, he said.

“One of the concerns is the VA has a lot of great treatments for PTSD and depression and things that might influence a person’s motivation to end their life, and what we are trying to come up with are new and better treatments,” Seim said. “Not everyone is ready for psychotherapy and not everyone responds to medication. And that is why these biological-based treatments like TMS have promise in augmenting existing therapies.”