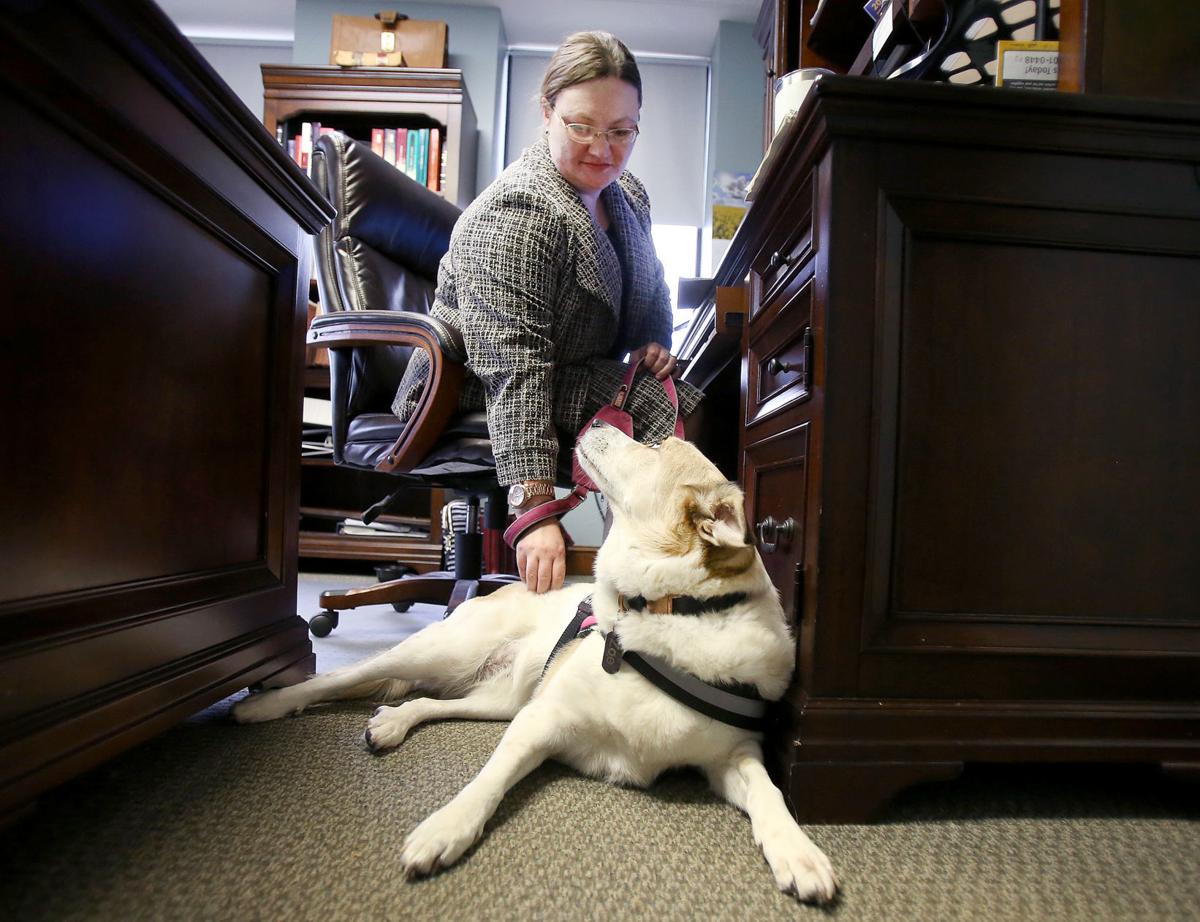 Waco attorney Rebecca Griffin gets by with a little help from her friend, Zoe, her therapy dog who can detect when she is feeling bad and about to have a seizure. Zoe never leaves Griffin’s side. 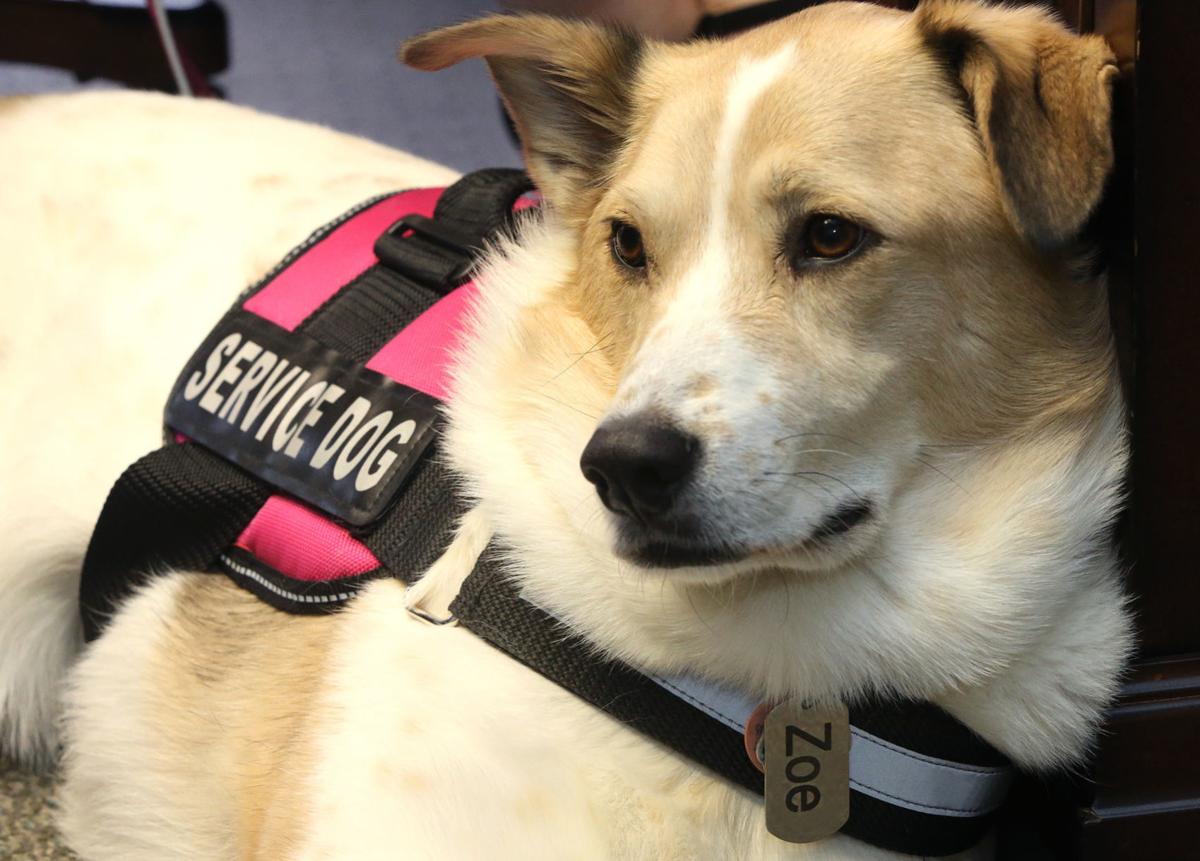 detects when Griffin is about to have a seizure or migraine. 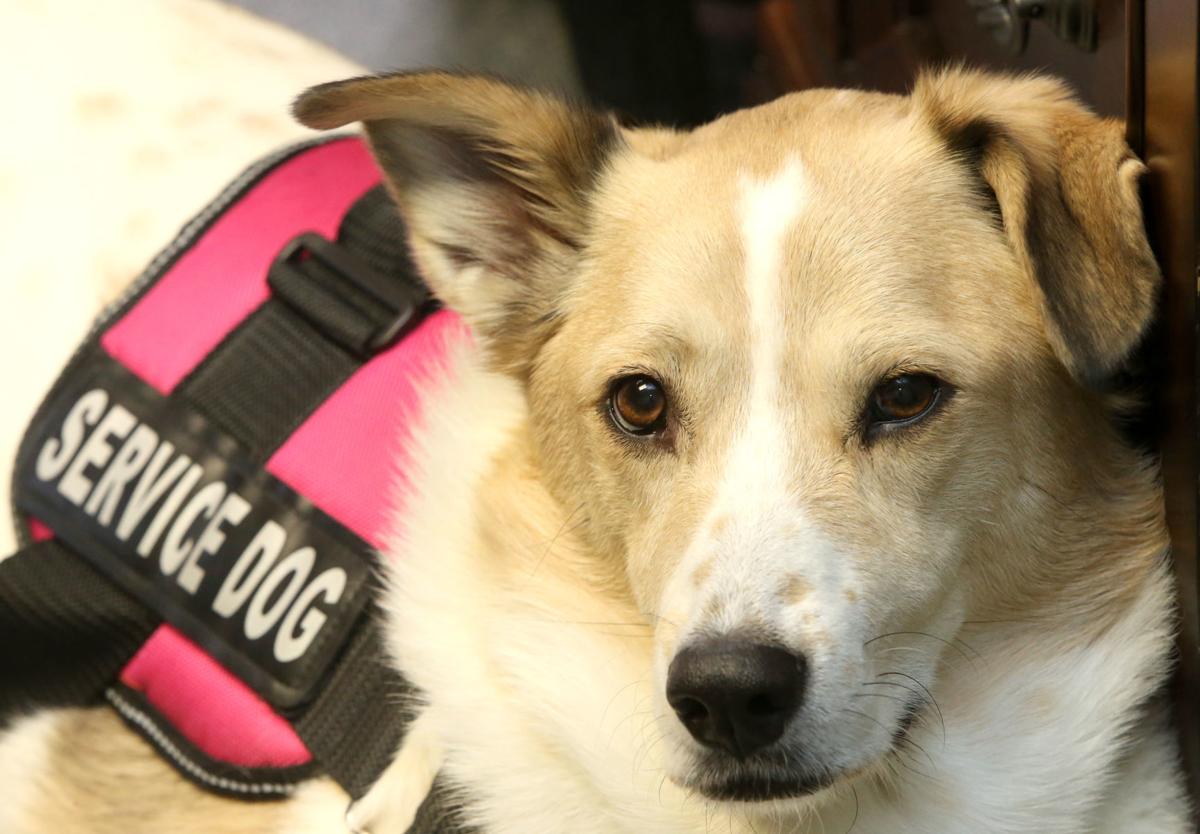 Waco attorney Rebecca Griffin gets by with a little help from her friend, Zoe, her therapy dog who can detect when she is feeling bad and about to have a seizure. She never leaves her side. 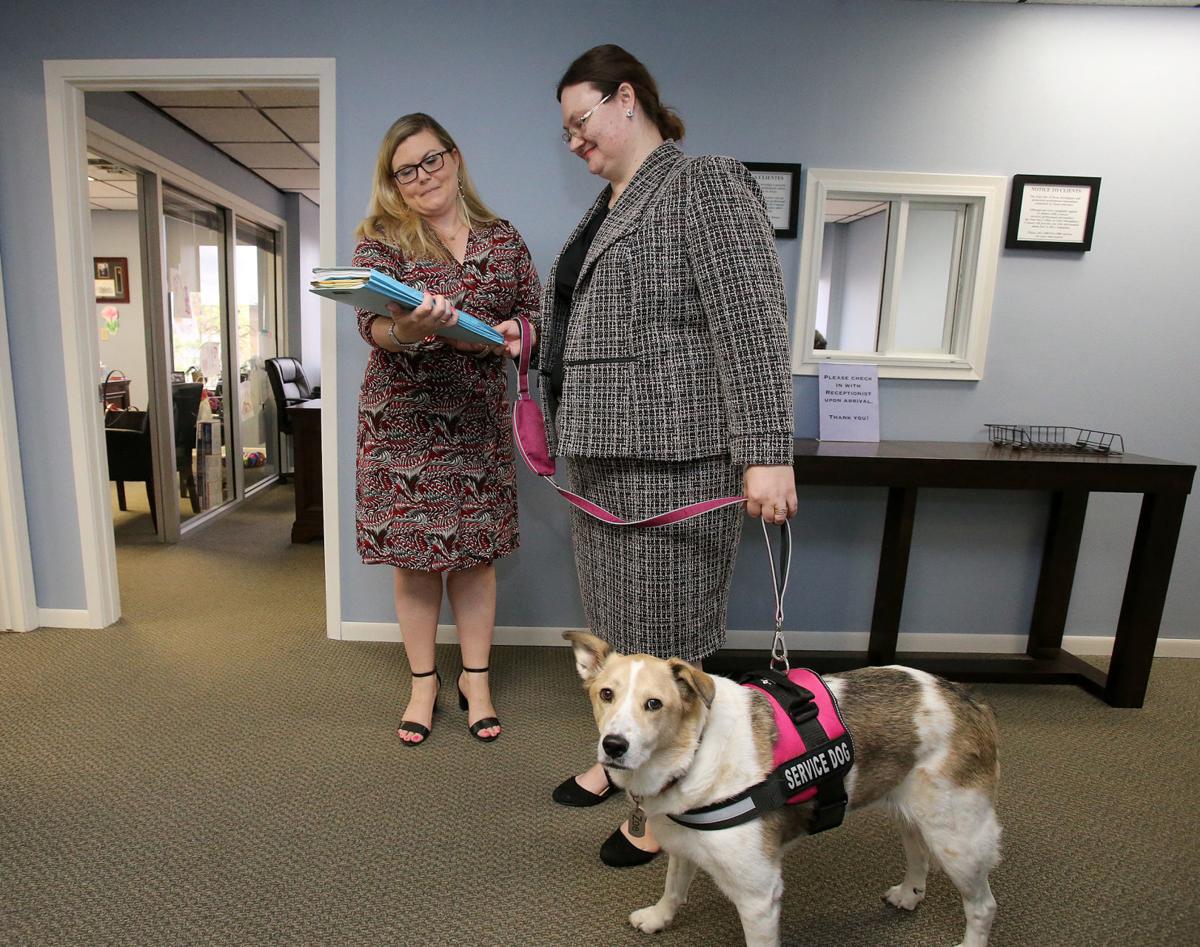 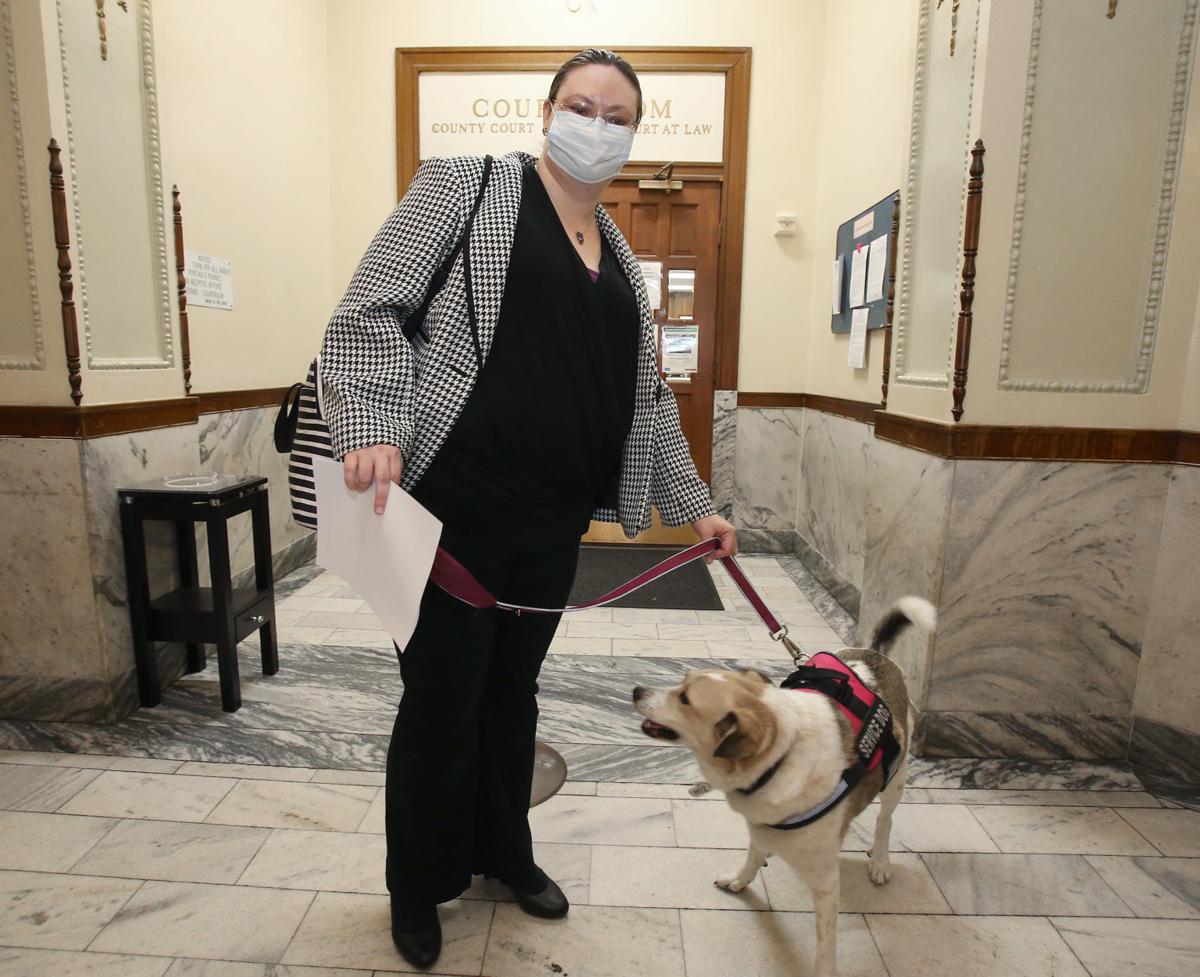 Waco attorney Rebecca Griffin brings her service dog, Zoe, with her to the McLennan County Courthouse. Zoe helps alert Griffin when she is about to have a seizure or migraine.

Waco attorney Rebecca Griffin gets by with a little help from her friend, Zoe, her therapy dog who can detect when she is feeling bad and about to have a seizure. Zoe never leaves Griffin’s side.

Waco attorney Rebecca Griffin gets by with a little help from her friend, Zoe, her therapy dog who can detect when she is feeling bad and about to have a seizure. She never leaves her side.

Dogs, like children, can bring immense joy to families. But dogs, like some children, are often messy, rambunctious and demanding of their parents’ time and attention.

Rebecca Griffin and her husband, Nathaniel Abney, have three dogs and no children. However, one of their dogs has a special gift, and they have learned when Zoe is seeking their attention, it can be dangerous for Griffin if they ignore her.

Zoe, a 6-year-old Corgi-Pyrenees mix, has been Griffin’s service dog for the past three years and is never far from her side. Griffin suffers from non-epileptic seizures, migraines and hypoglycemia and has undergone numerous tests to try to determine the cause of her ailments. Griffin also has had heart surgery and two neck surgeries in recent years.

“I am held together by duct tape and bubble gum and pure cussedness,” said Griffin, a 36-year-old attorney who has practiced family law in Waco for 12 years.

Zoe, in her role as service animal, can sense when Griffin is feeling bad and alerts her to sit down and take it easy. She sometimes even lies across Griffin’s feet to make sure she stays in a chair and does not fall and hit her head in the throes of a seizure.

“Sometimes she backs against my legs and pushes me into a chair,” Griffin said. “Let me tell you, with 65 pounds of dog on your feet, you are not going anywhere.”

Amazingly, if Griffin is feeling bad but chooses to work through it because she is trying to meet a deadline or arguing a case in court and too busy to pick up on Zoe’s warning signs, Zoe will run to an adjoining office to get the attention of Griffin’s co-workers. On at least two occasions, she has gently grabbed the sleeve of an attorney in court to warn her that Griffin is feeling bad and needs to sit down.

“She puts her paw on me, stands on the arm of my chair or paws at me. She does an alert bark, a short, sharp bark. She stares at me or she put her ears straight like a fox,” Griffin said. “If her ears go up, I am going to have a bad day. If I ignore her or tell her it is fine, she will tattle on me and go to someone in the office and go get them. So I know if she leaves and goes to someone else, they will come in and say, ‘Zoe says you don’t feel well.’”

Griffin’s maladies are often related to stress, but doctors really have not determined how the seizures and other symptoms are brought on. Her health issues put her career in jeopardy and forced her husband, a former supervisor at UPS, to quit work so he can jump up at a moment’s notice to attend to Griffin’s medical needs.

“It can be stress-related, but for me, the adrenaline from being in court tends to help,” she said. “So I can go through a jury trial with no problem, but maybe the day after the jury trial, I am laid out. It’s when the adrenaline dumps that I am more likely to have problems.

“Sometimes something upsetting happens, or a severe front moves through and the pressure changes. I can’t plan it. I have to have a full calendar because I have to go about my business because they can’t predict it.”

Griffin’s seizures can come as frequently as once a week. Sometimes, she can go a month or two without an episode.

That is where Zoe comes in. She once alerted two days in advance of Griffin having a major migraine. On many occasions, she has alerted them in time for Griffin to sit down before she had a seizure or blacked out, preventing her from possible serious head injuries.

“There have been several times when she surprised both of us,” Abney said. “She is just amazing. She has really been an answered prayer, a Godsend. She is just an amazing girl and she knows it. She is a working dog, but if she gets permission, she will just jump up in your lap and love you to death.”

Zoe is all business while wearing her pink service dog vest. She stays with Griffin at work and keeps a close watch on her, even if it appears to the untrained eye that she is dozing. At the slightest squeak of Griffin’s chair, Zoe’s head flies with eyes on Griffin.

“Being at work is stressful for her as well because she has to be on all the time,” Griffin said. “So when we get home, just like I take off my suit and take off my heels, I get that vest off of her and she just passes out on the couch. She is done. She knows it’s Nathaniel’s watch when we get home and she can be a dog, although she still keeps a pretty close eye on me most of the time.”

Zoe is so good at her job, Abney said, that she unwittingly “outed” three women who were pregnant but had not told a single person that they were expecting a child.

“She kept staring at this lady in the restaurant,” he said. “I just thought she was curious and wanted to go say hi, but Rebecca said, ‘What if that woman is sick?’ So we approached her on the side away from the others she was with and asked if she had any health problems. She said, ‘No. The only thing is I am pregnant but I haven’t told anybody yet.’ Zoe must have a sense for picking out who might be having babies, too, because it has happened three times.”

Griffin’s law firm associate, Spring Thummel, said she is glad to have Zoe in the office.

“It is actually a nice thing to have her in the office because we know she is there to check on Rebecca and make sure Rebecca is OK,” Thummel said. “But she kind of comes in and checks on all of us sometimes to make sure we are feeling OK or if we are stressed out. It’s nice to have her here.”

Griffin, a Baylor University Law School graduate, and Abney got Zoe from a rescue shelter when she was 6 months old. Griffin’s episodes increased, and her career was jeopardized. She was taken out of the McLennan County Courthouse and her office on a stretcher a few times after seizures or blackouts. So they looked into getting Griffin a service dog.

“We were very blessed because a service dog can take tens of thousands of dollars and years on a waiting list,” Griffin said. “But when I started having health problems that were starting to affect me going to court, I knew I was going to need a service dog. I stated looking around and it was going to be a three- to five-year wait list and $30,000 to $50,000 that insurance does not cover. And I went, ‘I am not going to have a career in three to five years if I can’t reliably go to court. That was not going to work out.”

So they took Zoe to see Sandy Wittliff of Angel Paws in McGregor, who many call a “dog whisperer” for her training skills.

Because Zoe was already alerting and she and Griffin had bonded and knew each other well, most of her training concerned basic elements of obedience and how to work as a service dog at the courthouse, in restaurants, in elevators and other places. Zoe received about 10 hours of obedience training and six hours of service dog training.

Now, Zoe even stands up with others when the judge enters the courtroom.

Judge Vicki Menard of Waco’s 414th State District Court said Zoe is welcome in her court anytime, adding that she always acts professionally and has never caused a disruption.

Since working with Zoe, Griffin has become an ambassador for service dogs. She said she has been shocked on numerous occasions about how people react to seeing her with a vest-wearing dog, including those who do not see her with an obvious disability and who scream, “What’s the matter with you?”

On other occasions, well-meaning children just want to pet Zoe, not knowing she is working and should not be distracted. Others seemed miffed that she is next to them in a restaurant, Griffin said.

“Let me tell you, people have no manners when it comes to service dogs,” Griffin said. “I try to be a good ambassador for service dogs, but most of the time my hot food is cold and my cold food is hot while I try to explain to people what she does. I can’t tell you how many times people have told me, ‘Well, you don’t look blind.’”

Wittliff and Griffin decry the fact that the Americans with Disabilities Act of 1990 does not require certifications for service dogs. That has given rise to fake service dogs or animals that people questionably claim are for emotional support so they do not have to pay rental pet fees or additional airline rates, they said.