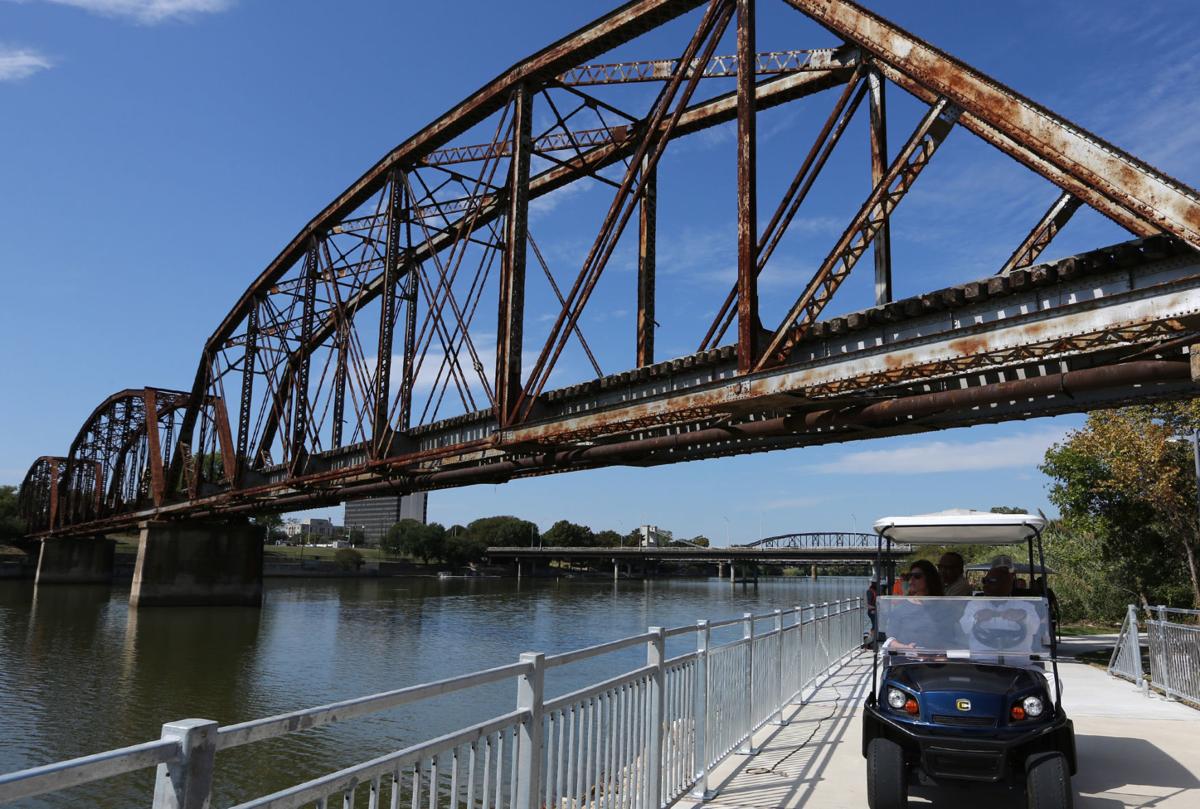 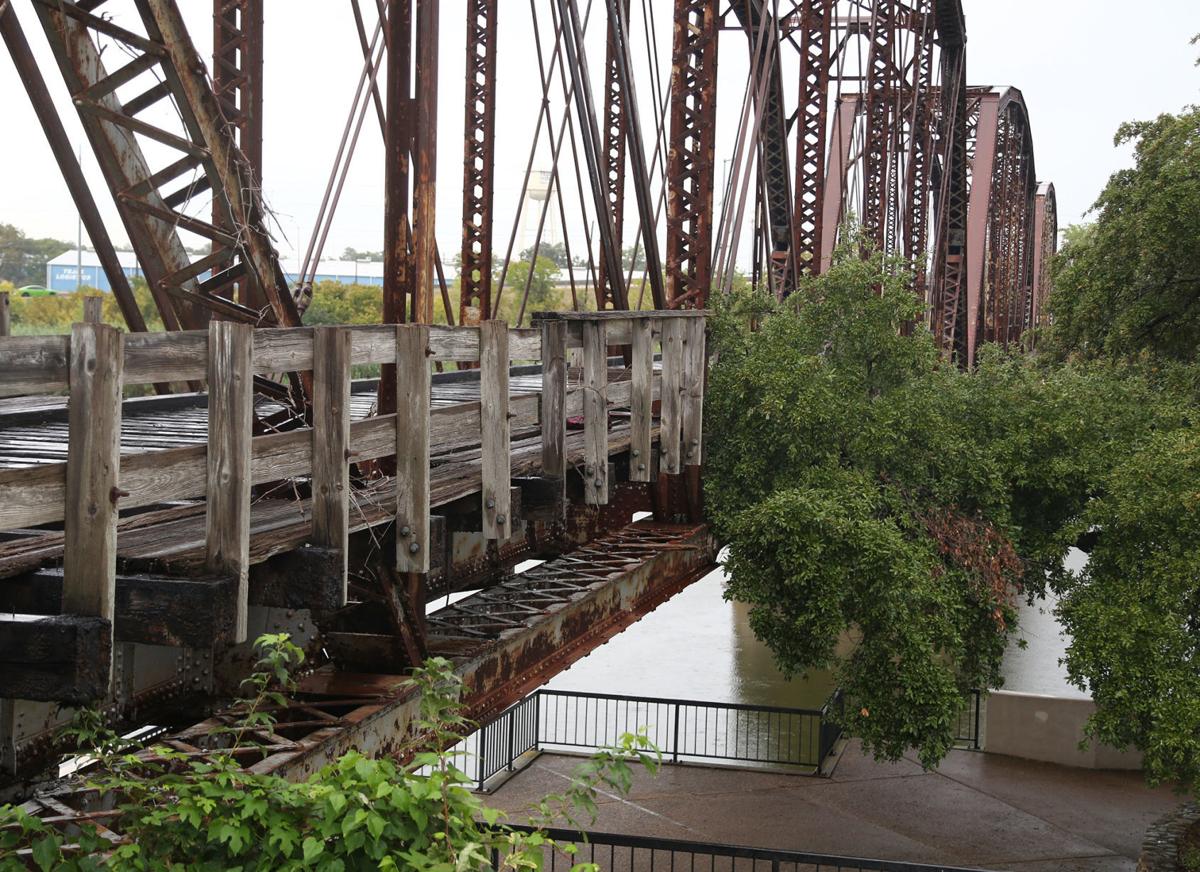 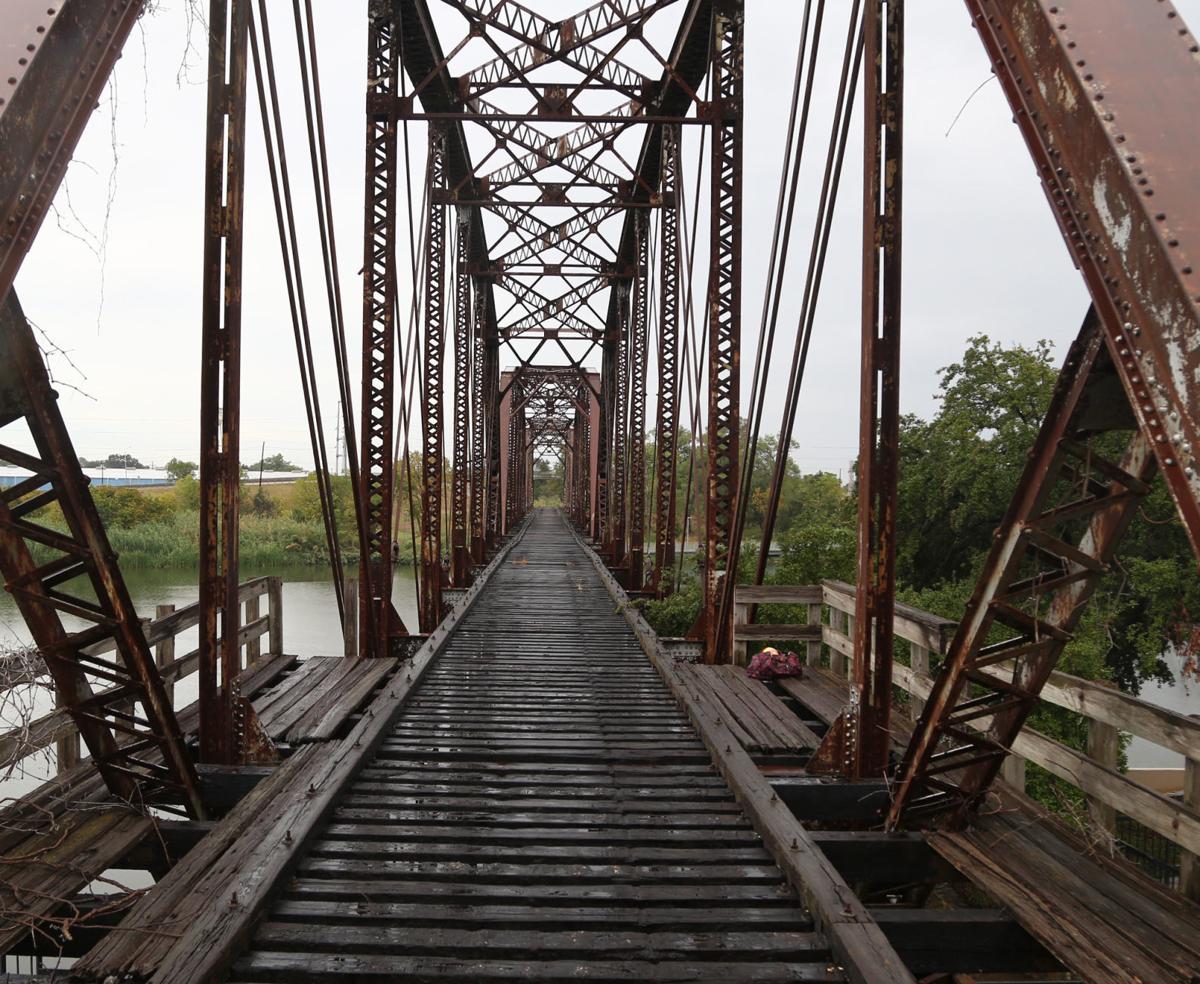 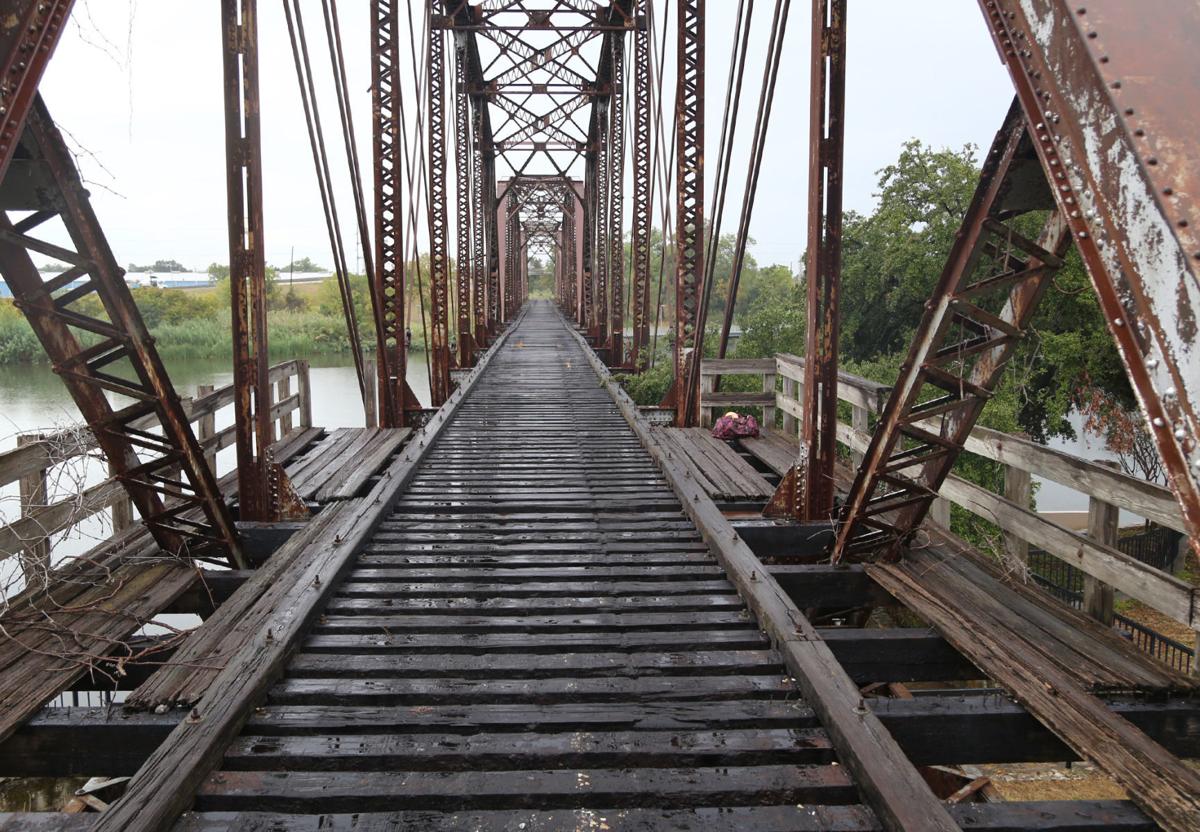 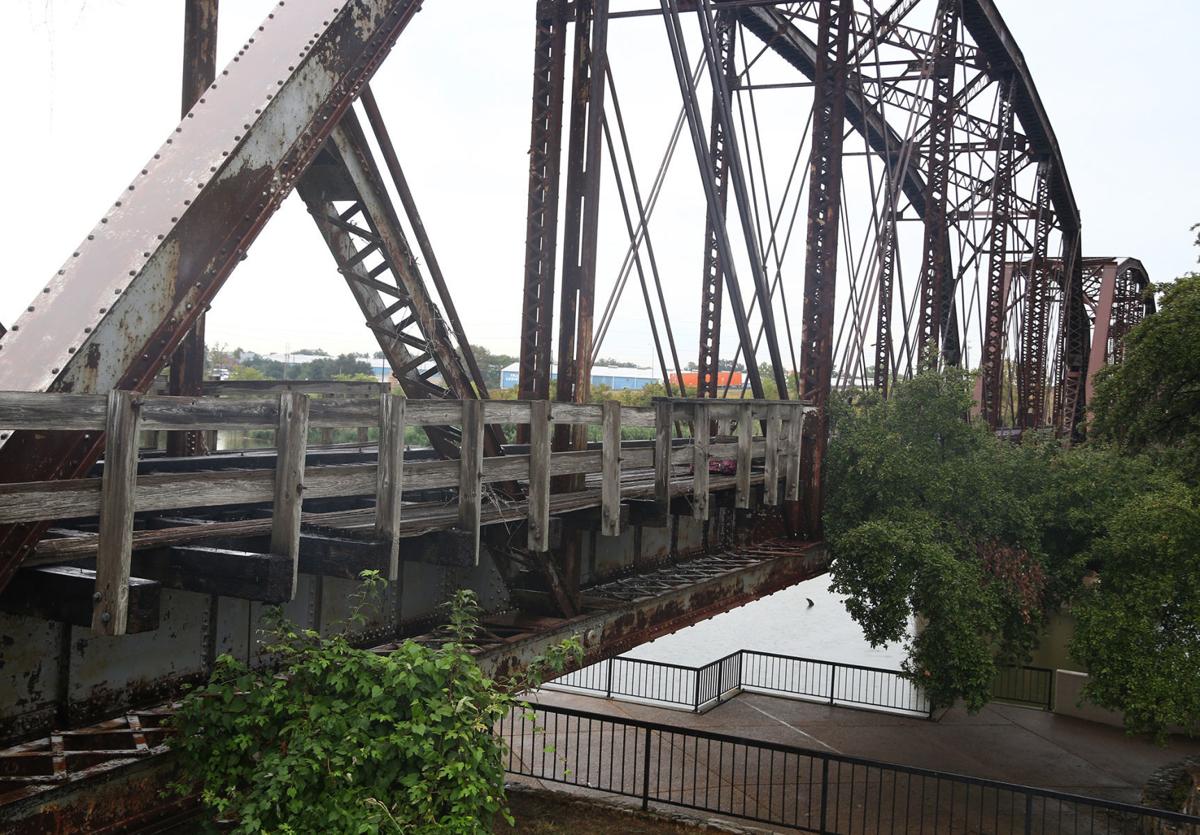 Plans are still developing, but City Center Waco hopes to have a funding request ready by December for redevelopment of the disused Cotton Belt railroad bridge over the Brazos River.

Preliminary renderings show a partially shaded pedestrian bridge with a plaza jutting out from the bridge structure on the western bank, near the back of the Ben E. Keith building at University Parks Drive and Jackson Avenue. City Center Waco Director Megan Henderson said removing the bridge would cost $3.5 million, and repairing it would cost $4.3 million. City Center hopes to have a request for a Tax Increment Financing Zone grant ready to present by December, Henderson said.

The bridge would serve as a pedestrian connection between a retail area along Mary Avenue and East Waco, not far from a site where work for three new hotels is underway.

On the eastern bank, the bridge lands on a tract owned by developer Rick Sheldon, who donated the bridge to City Center Waco in 2016. On the western bank, it lands on vacant city-owned park land and near another tract owned by Sheldon at University Parks and Franklin Avenue that serves as a food truck court.

The Wallace Group, a local firm now known as CP&Y, prepared the preliminary renderings and remains involved in planning.

Parks and Recreation Director Jonathan Cook said the department is looking at ways of developing the green space on the western bank into an urban park. He said for that concept to work, the area needs to feel safe for pedestrians.

“I must admit, this is an area that, whenever it came up in the department, we always said ‘This is a great spot,’” Cook said. “It’s beautiful, it’s right on the river, it’s right downtown but we’ve yet to do anything with it.”

Cook said the bridge could serve as a gathering place with seating, shade, activities for kids and public art, with room for food trucks to park along Mary Avenue.

CP&Y architect and project manager David Nisbet said the elements proposed for the bridge itself are only part of the equation. It may also tie into the riverwalks on each bank.

“Really, the bridge is the connecting link between trail systems, so we see this as a larger project than just the bridge,” Nisbet said.

Henderson said Mary Avenue, which lines up with the bridge, also is being considered as a pedestrian counterpoint paralleling a Bus Rapid Transit system the city is planning for Franklin Avenue. Discussions have also been underway for years about making Mary a “festival street” suited to hosting events near where it hits University Parks along the river.

In addition to TIF funding, City Center may seek grants from the Texas Department of Transportation or the Texas Parks & Wildlife Department to make pedestrian connections associated with the bridge. Basic pedestrian improvements around the bridge would cost about $1.3 million, but estimates of the cost to connect the bridge with existing trail systems have not been developed.

Nisbet said in the next few weeks, a coalition consisting of City Center Waco, Sheldon, the parks department and everyone else involved with the project will have its first meeting to start putting together a proposal and start design work in earnest.

“That’s the effort we’re going through now,” Nisbet said. “This isn’t just individual developments, this is more of a cohesive design.”

Henderson said the first step would be to remediate hazardous parts of the bridge, then either repair it or remove and replace it. Creosote timbers and lead paint on the bridge would have to be removed, and structural repairs and rust removal would be needed. She said the group would also like to widen the walkway and add railings and lighting.

“Obviously, there’s a lot of complicating factors of a historical railroad bridge going over a body of water, and with all of the environmental concerns this is not an easy restoration project,” Councilman Dillon Meek said during a presentation to the city council last week.

Meek said he feels the initial conceptual work struck the right tone for the project. He said the city should make it as easy as possible for activities to be scheduled on the bridge.

“I think if there are a couple of food trucks there, a couple of permanent spaces that people know are always going to be open, it’s going to be easier to say ‘let’s have that yoga class there,’” he said.

However, it remains unclear whether the bridge has the structural integrity to support activities or commercial operations like food trucks, Henderson said. An upcoming structural evaluation will make that determination, she said.

Councilwoman Andrea Barefield said the concept is “awesome” and the presence of retail operations or food trucks would set the bridge apart from the Suspension Bridge, which is about two blocks away.

Meek also requested the project proponents look into fencing or screening to obscure the Ben E. Keith distribution center, which butts up against the planned walkway. He said the green space and the walkway will provide a place for families to spend time together outdoors.

“I look at it more symbolically, bringing together the two sides of the river and, no pun intended, bridging the gap,” Councilman Hector Sabido said. “I just think that’s a great way to show unity between both sides of the river.”

The Waco City Council approved two payments Tuesday for projects meant to link development on both sides of Lake Brazos.