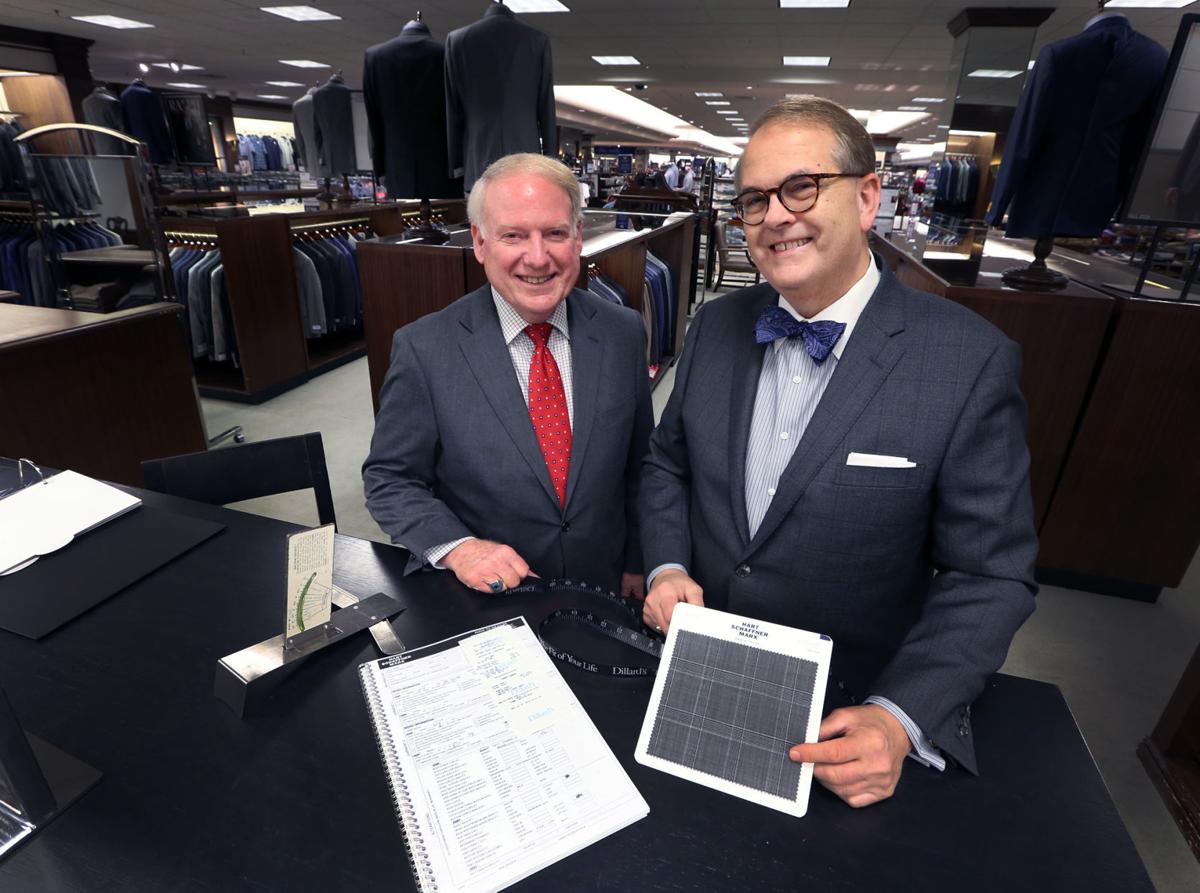 Tommie Hugghins (left) and Charles Middlebrooks each have spent long careers putting men in fine clothes and took winding paths to the Dillard’s store in Waco. 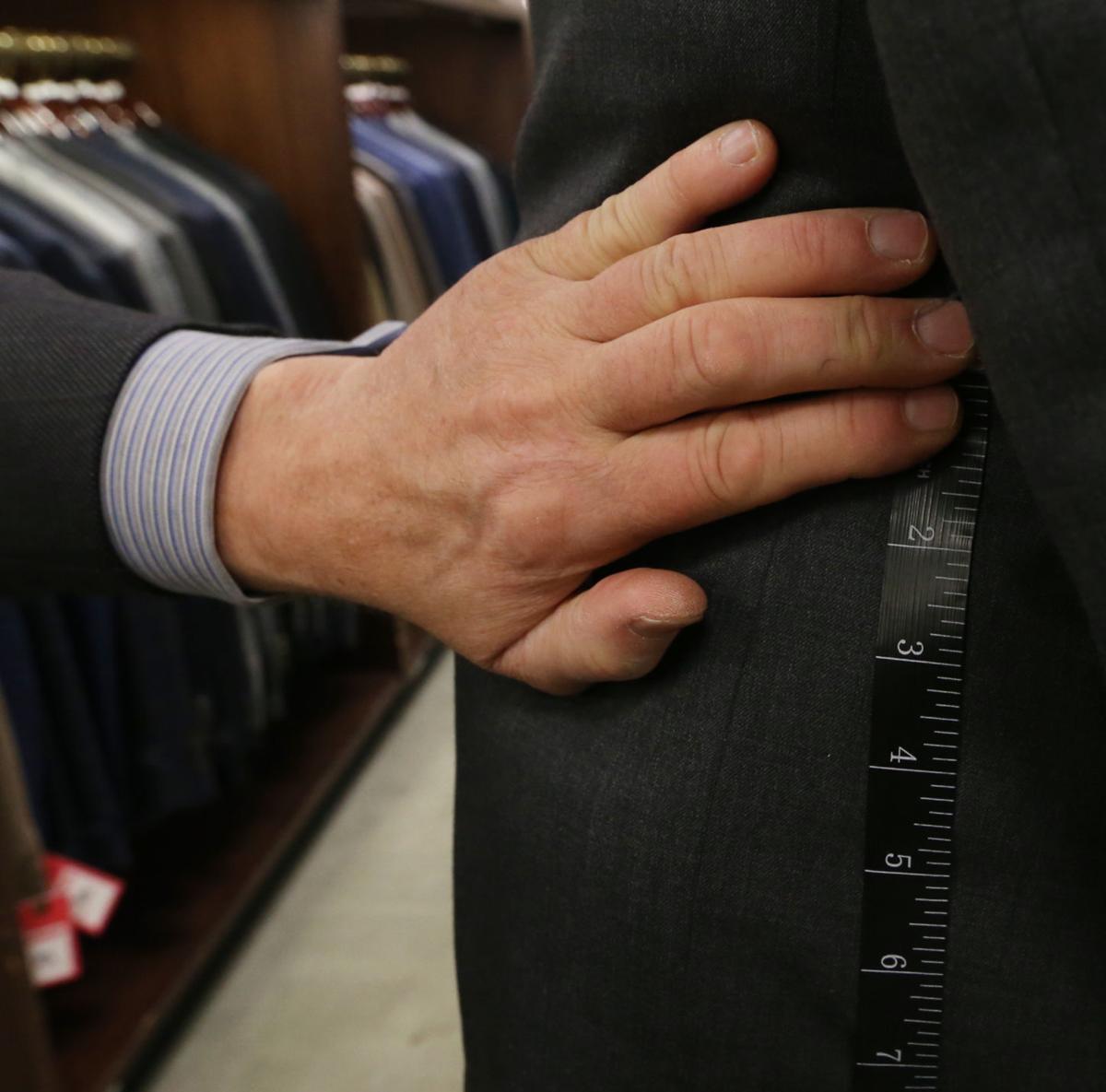 Charles Middlebrooks takes a customer’s measurements. He got his first job assisting with fittings at age 16 in his hometown of Milledgeville, Georgia, and the twists and turns of his career brought him to Dillard’s in Waco eight years ago.

Charles Middlebrooks takes a customer’s measurements. Changes in professional wardrobes over the years have led to changes in his work, but the importance of the personal touch he provides remains the same, Middlebrooks said.

Tommie Hugghins (left) and Charles Middlebrooks each have spent long careers putting men in fine clothes and took winding paths to the Dillard’s store in Waco.

Charles Middlebrooks takes a customer’s measurements. He got his first job assisting with fittings at age 16 in his hometown of Milledgeville, Georgia, and the twists and turns of his career brought him to Dillard’s in Waco eight years ago.

Charles Middlebrooks takes a customer’s measurements. Changes in professional wardrobes over the years have led to changes in his work, but the importance of the personal touch he provides remains the same, Middlebrooks said.

Southern hospitality reigns at the Dillard’s store in Richland Mall, where Charles Middlebrooks, originally from Milledgeville, Georgia, and Tommie Hugghins, a product of the East Texas Piney Woods community of Alto, have been putting men in fine suits and crisp shirts for decades.

“I treat people like I would want to be treated,” Hugghins said then kindly paused to confirm the unusual spelling of his last name. “Yes, there is an ‘h’ in the middle. I’m told it had to be added when all the Huggins horse thieves were run out of Alabama. Just joking. The Hugghins family is from Red Level, Alabama, a forested area very similar to East Texas.”

Hugghins, 71, has been toiling in the retail, service and food sectors since he graduated from Stephen F. Austin State University in Nacogdoches. He managed a restaurant in a Holiday Inn hotel, managed Levi’s-branded stores at several locales, moved on to a now-defunct regional retailer that made quite a splash around the state, then worked two stints with Bealls, the department store giant, his last tour of duty beginning in 1980.

He was assigned to stores in Katy and Palestine before landing in Waco. Bealls paid his bills until the chain changed hands in a leveraged buyout.

“You know how it is. The new owner says nothing will change, then everything changes,” Hugghins said.

He started weighing his options, having developed working relationships with managers of other stores in Richland Mall, and serving on the mall’s advertising board. He accepted an offer to join what then was a competitor, Dillard’s, just down the mall a ways.

Now 65 years old, Middlebrooks took a long and winding road to Dillard’s, one that began when he was a youngster back in Georgia, traveling with his father, a Baptist minister, on visits to the sick and disabled.

“I think that made an impression on me,” Middlebrooks said, mentioning the evolution of his desire to minister to the needs of people.

At age 16, he was hired as a salesperson in a specialty store in his hometown. The store manager was a friend of the family and knew of Middlebrooks’ impressive work ethic, having witnessed him raking trash beneath the baseball stands. As a teen, he was put to work assisting with fittings, helping grown men shopping for Botany 500 suits, “which were top of the line then, comparable to $1,500 suits today,” Middlebrooks said.

An older brother had worked in that same store, and he remembers being impressed by the nice clothes his sibling brought home, Middlebrooks said.

“That sparked an interest in me in what you might call my artistic bent, my love for blending clothes and colors,” he said. “My real love for clothes came with my brother working down there at that store.”

With his father in the ministry, later overseeing mission projects for 36 churches, and his mother teaching school, family time together became something to cherish. It meant cross-country trips to San Francisco and the World’s Fair in Seattle and New York, following the Lincoln Heritage Trail highways from Kentucky to Illinois, and treks to Washington, D.C., that included stops at historic sites.

“With my mom’s inheritance from her grandmother, we were able to buy a camper trailer and were able to travel with it before that became popular,” Middlebrooks said with a laugh. “We stopped at state capitols, homes of presidents, impressive geography sites, the Grand Canyon, for example.”

After college at both the University of Georgia and at what is now Georgia State University, Middlebrooks’ professional career included retail management positions in Marietta, Georgia, before hitting the big time in Atlanta, where he joined the venerable George Muse Clothing Co.

As his career progressed, Middlebrooks met with a Dallas-based financial consultant. He wanted to relocate to a market smaller than Atlanta but larger than Milledgeville. A position in Waco, with a fine clothing company called David Shellenberger’s, proved the answer to Middlebrooks’ prayers.

He and wife Mary Ann made their way to Central Texas, where Middlebrooks’ drive and expertise flourished. He later would secure financing to buy the Shellenberger’s location in Waco, while David Shellenberger relocated to Austin. All was going swimmingly, it would appear.

That all changed when Charles and Mary Ann were severely injured in a traffic accident involving a drunk driver. Charles suffered a concussion, causing lingering headaches and foggy-headedness for years and forcing him to sell the business. The fog finally lifted, and Middlebrooks began to offer in-home and in-office fittings, serving a clientele desiring a more personal touch.

The recession of 2009 came knocking, and knocked Middlebrooks’ business for a loop. Clients went under financially, taking Middlebrooks along.

“John Moses hired me, and I’ve been there eight years now,” he said.

Middlebrooks and Hugghins both work on commission. They log 45 to 55 hours a week on Dillard’s seven-day schedule, sometimes more.

“I know thousands of people,” Hugghins said matter-of-factly. “That’s neat, though it has its challenges. My wife, Linda, who works for a local oral surgeon, also meets a lot of folks. When we go out to eat, there are always people we know stopping by to say hello. We have so many friends through our work and our church, St. Jerome’s. Waco is a big little town.”

Their profession has changed considerably, the two men agree.

Fewer men wear formal attire at work. Professions that once required wearing a fresh suit daily have evolved. Clients who once bought five suits at a time usually limit their spending to one or maybe two purchases.

The personal touch remains the same, however.

Middlebrooks has contact information for 2,000 regulars logged in his phone. He is constantly providing updates on merchandise and specials. He said he works with some clients to plan wardrobe requirements months in advance.

He typically approaches customers, even those new to the store, with an outstretched right hand of greeting. He strives to build a rapport, engage in back-and-forth communication. He provides his name. Compare that method, he said, with merely asking if a customer needs assistance.

Never, ever judge a customer’s pocketbook by his cover.

“I remember back in Georgia once, I had a customer come in wearing overalls. He had mud on his boots. He appeared to be a farmer, and probably was,” Middlebrooks said. “Well, I assisted him, and he pulled a roll of hundred dollar bills out of his pocket that would choke a horse. He probably spent a a thousand dollars cash on clothes, and this was many years ago.”

“I’ve had people come in the store, and I didn’t remember them from Adam’s house cat, but they said I treated them with respect the last time they were in,” Middlebrooks said “I treated them like a real customer, so now that they do have money, they are going to shop here with me.”

Though now more than 70, Hugghins said he rarely ever feels his age.

“Except when I’m helping some Baylor student with an interview suit, and the dad with him says, ‘You helped me pick out an interview suit when I graduated from Baylor,’” Hugghins said with a laugh.

“I think it’s safe to say I’ve been here for generations.”