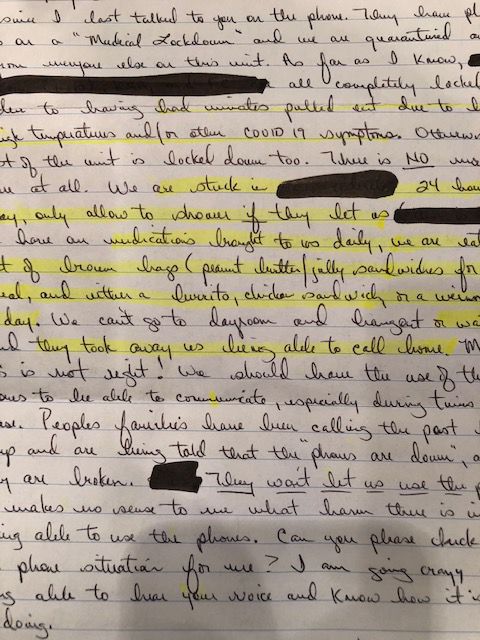 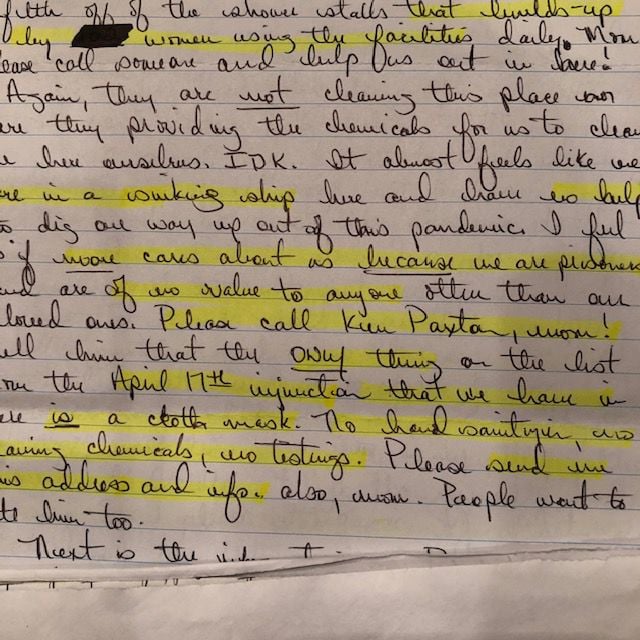 That only led to more sleepless nights for Sharon Green, who has had limited contact with her daughter in the Dr. Lane Murray Unit in Gatesville since the women’s prison went on lockdown in early April after several inmates and employees tested positive for COVID-19.

Then the letters came from Green’s daughter, whose name is being withheld out of fear of retaliation. Over the course of the next month, the letters grew more frantic, with Green’s daughter writing in one that “no one cares about us because we are prisoners and are of no value to anyone other than our loved ones.”

Since the first worker at the Murray Unit tested positive for COVID-19 on March 30, the number of employees at the unit with the disease has risen to 20 total. A 37-year-old inmate first tested positive April 4, which is when the Texas Department of Criminal Justice started isolating sick inmates in the Murray Unit, along with those who had been exposed to anyone with COVID-19. As of Saturday, 68 inmates had tested positive, the third highest total in the state.

Green’s daughter has remained confined to her unit within the prison, only leaving to “shower if they let us,” her daughter wrote in another letter. She said she went one four-day span without taking a shower.

Extended lockdowns lead to “tremendous idleness,” which in turn leads to anxiety, tension and violence, said Michele Deitch, a senior lecturer and prison conditions expert at the University of Texas’ LBJ School of Public Affairs and law school. That is why she was glad to hear the Department of Criminal Justice was finally implementing mass testing at multiple prison units.

The department started mass testing Tuesday, using oral fluid tests that employees and inmates can administer themselves. Testing is complete at the Murray Unit, but it continues at the Linda Woodman State Jail for women and Alfred D. Hughes men’s prison in Gatesville, both of which also are on lockdown.

While Deitch lauded the new targeted testing, she said it was late in the process, especially for a facility like the Murray Unit where the virus appears to be widespread. Testing is more valuable at an early stage, when fewer people are infected, so the prisons can more easily separate the infected from the healthy.

“The most critical thing is identifying who has the virus and who’s been exposed, separating them and tracing anyone that they’ve come into contact with so we know who’s most at risk,” she said.

Deitch said it is “absolutely critical” that the Department of Criminal Justice find ways to release the people who are most medically vulnerable to the novel coronavirus and to group inmates the department is confident are not infected in certain housing areas that will allow them to move about more freely. She said inmates on lockdown are not able to finish programs and services they need to complete to be released and have had limited contact with their families, like Green and her daughter, which only creates more anxiety and uncertainty among inmates.

Department of Criminal Justice spokesperson Jeremy Desel said prisons have added five-minute calls for inmates as they are escorted to and from the showers, when normally under a lockdown inmates would have no access to phones. Additionally, prison chaplains have made more than 45,000 contacts to inmates’ families in the past two weeks by handing out forms to the prisoners, who then fill them out and return them. As long as the person the inmates lists to contact is on their telephone or visitation list, a chaplain or other worker calls the family to relay the message.

Green last heard from her daughter Thursday. She said the five-minute limit on the phone call was up before she knew it, and then her daughter was gone again. Her daughter told her there are more than 100 women confined to her unit, and while they have cotton masks, they do not have much else to protect themselves, like hand sanitizer or cleaning supplies.

“They feel like it’s a death trap,” Green said.

The programs inmates need to complete to be eligible for parole have been suspended because of the COVID-19 outbreaks in prisons, making it impossible for the inmates to be released and out of harm’s way, Deitch said. Releasing medically vulnerable inmates and those who are eligible for parole would reduce the prison’s population density and allow for some semblance of social distancing, which would reduce the burden on the health care systems inside and out of the prison.

“You can’t socially distance the way we are trying to do in the outside world,” she said. “There are definitely things they could do to reduce how crowded spaces are within that environment, most of which I’m reasonably confident are not happening to the extent they should be.”

Green’s daughter is up for parole review in July, but Green wishes her daughter could come home now. She called the governor’s hotline and wrote him, along with State Sen. John Whitmire, D-Houston, who chairs the Senate Criminal Justice Committee, seeking her daughter’s release.

“None of that has resulted in anything,” she said.

Even with mass testing, each prison must ensure it is not introducing new potential sources of infection, so staff should be tested daily to ensure every worker has tested negative for COVID-19 before entering the prison, creating a “cocoon,” Deitch said.

Another problem with lockdowns is the food. When the Texas Department of Criminal Justice places a prison on lockdown, it closes the mess halls to prevent large gatherings of people. Right now, the preparation of brown bag meals being distributed to inmates is overseen by wardens, and spot checks to ensure the quality of the food are done by people who do not work in the food service area, Desel said.

In a letter, Green’s daughter wrote that she eats peanut butter and jelly sandwiches almost every day, but sometimes she gets a burrito or chicken sandwich out of the brown paper bags brought to her unit. A recent article by The Marshall Project highlights the Texas prison food provided in these bags, with photos of hot dogs rolled into white bread and powdered milk beside boiled eggs.

Desel said each meal delivered to inmates meets the caloric counts and requirements of the federal Food and Drug Administration.

But Deitch said it is impossible to know if every prison unit is following all the new guidelines Department of Criminal Justice has issued since COVID-19 hit the prison system.

Not many states have a governmental entity designed to do routine monitoring of prison conditions and to address the concerns of incarcerated people, Deitch said. Washington state has an Office of Corrections Ombuds, which is an independent public office that monitors and investigates complaints in state correctional facilities to make sure inmates’ rights, health and safety are protected, according to its website.

“This is necessary to find out what’s happening behind the walls and to better protect the health and safety of the people inside,” Deitch said. “That’s for both people who live in these facilities and people who work there.”

Desel said it is everyone’s job in the department to make sure these policies are being implemented with fidelity. The correctional officers make sure inmates adhere to the rules, and the inmates can file complaints against officers through a grievance system.

“That’s the way the system works,” he said. “It’s all layers of oversight to make sure that policies and procedures are upheld and followed as they’re supposed to.”

In the meantime, Green will continue to write her daughter, while eagerly awaiting five-minute phone calls from her. After weeks of worry and sleeplessness, she said she “finally gave it to Jesus.”

Her daughter feels the same way, stuck inside eating peanut butter and jelly sandwiches and wearing a cotton face mask.

“It almost feels like we are in a sinking ship here and have no help to dig our way up out of this pandemic,” she wrote in recent letter.