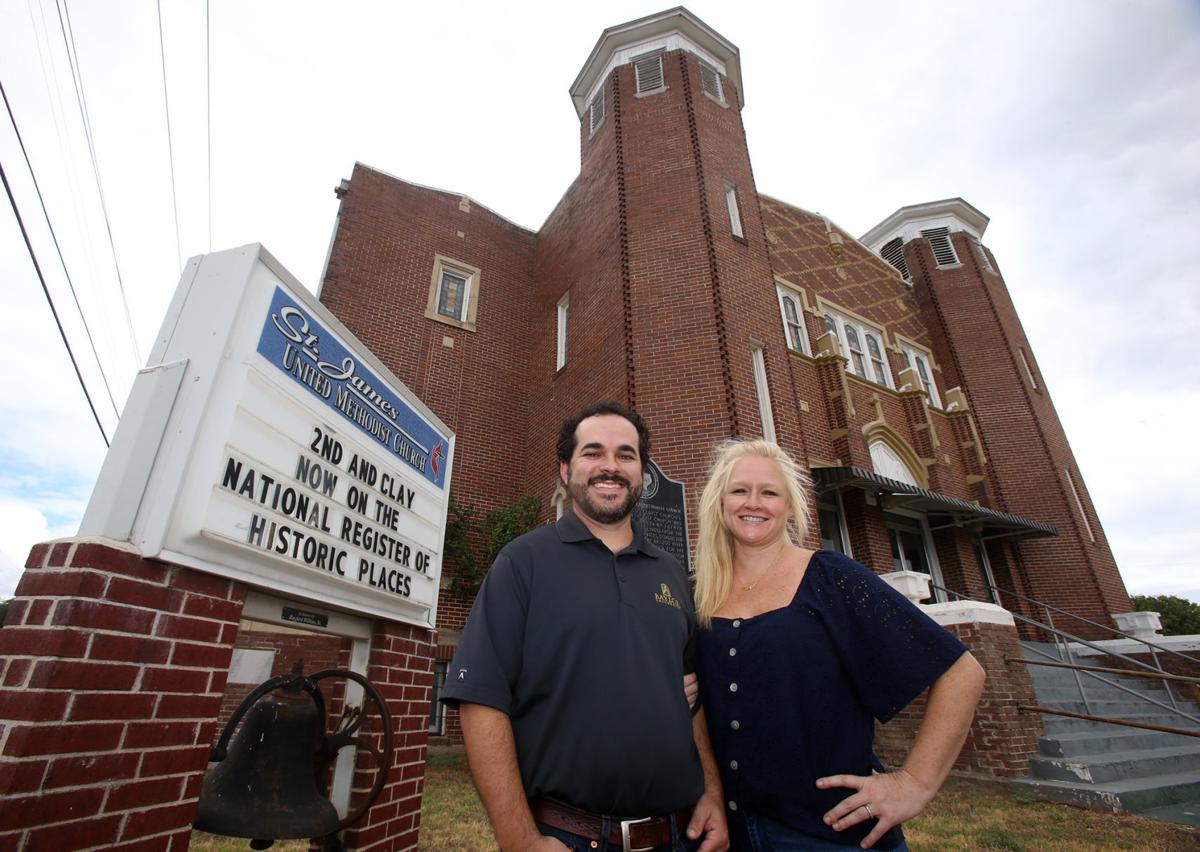 Lane and Amy Murphy stand outside the former St. James United Methodist Church building downtown, now known as 2nd and Clay. The building was recently placed on the National Register of Historic Places 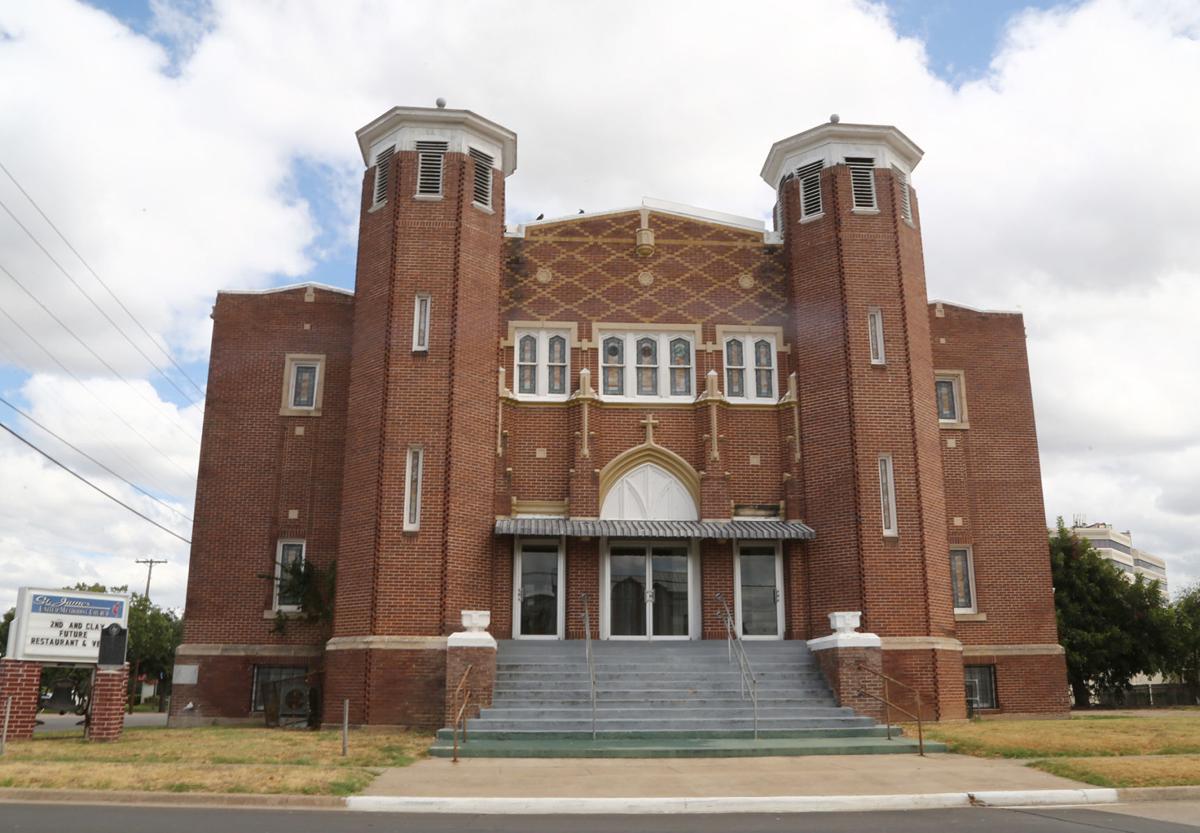 The former St. James Methodist Church building at Second Street and Clay Avenue was recently placed on the National Register of Historic Places, and a renovation project is set to start soon.

The photographs, mostly in black-and-white, tell the story of a 95-year-old church building at Second Street and Clay Avenue and the generations that prayed, laughed, praised God and raised the rafters with joyous music.

Images from St. James United Methodist Church’s time in the building remind that the church, founded by former slaves and long a touchstone of Waco’s black community, created a special place, and one that likely will be again. As of last week, the building was approved for placement on the National Register of Historic Places, an honor that means a Waco couple, Lane and Amy Murphy, can pursue federal tax credits for their pending renovation.

The Murphys hope to place in the basement a restaurant long on class and Italian-inspired cuisine, with assistance from a California-based group with expertise in creating offbeat restaurants. The sanctuary of the 13,000-square-foot church will become meeting space and a performance hall. As a bonus, the couple, both with ties to Baylor University, have recruited students and tapped school resources to assist with gathering historical photos and documents. Longtime members of St. James also are getting involved.

Their efforts to preserve already are bearing fruit. The Waco St. James United Methodist Church history Facebook page, separate from the page for the still-active Waco St. James United Methodist Church, fetes the alumni association of the city’s first black high school, A.J. Moore, which was active from 1881-1971. Then there was the circa 1922 photo of a “Tom Thumb” wedding, in which 19 youngsters posed wearing frilly dresses, tuxedos, bow ties and top hats.

A conference at the church scheduled in February 1945 was to address “Christian Race Relations” in the kingdom of God, said a bulletin from that era appearing on the Facebook page. Promotional material and blaring headlines stressed that the time for reconciliation was drawing near. A breakout session, meanwhile, was titled, “One of Waco’s Big Sins — Gambling.”

It is all there for the reading, and enjoying, and there is more to come.

Lane Murphy, who teaches freshman English courses at Baylor and writes for Baylor Magazine, said he finds the historic church irresistible. He has led at least a dozen classes on field trips there, providing students, especially those with limited knowledge of Waco, “a tangible link to its history.”

“The kids love it, particularly the historic monuments and markers,” he said. “We have our national plaque on order, and it should arrive in a couple of weeks. We will have some sort of plaque installation and will invite the congregation. We continue to scan and make copies of photos, and will blow up some for displays, to try and tell the story as best we can. We’re not just telling the story of the building. The people make it important.”

Murphy said the building’s inclusion in the National Register of Historic Places, and the requirements that designation imposes on renovation, will have little, if any, impact on his construction plans or schedule. He said he already knew of the church’s prominent place in Waco’s past and had planned modifications accordingly. He said his schedule calls for completion of the restaurant space within nine months to a year, and work will begin in a couple of weeks.

He said he has secured state and federal tax credits valued at more than $1 million tied to his plans for historic preservation. He and his wife, Amy, will use the credits themselves or sell them to a third party, as a country or organization would sell unused carbon emission credits.

The project also has qualified for a $531,185 local Tax Increment Financing grant. He rattled off that total without hesitation when asked about the TIF commitment, saying it appears on a sticky note attached to his computer.

“I get asked about that a lot,” he said with a laugh.

“This has been a long learning process for us, but I think it’s going to be worth it when we’re done,” he said. “Our vision has not changed. We’re still plugging away. We envisioned a seven-step process, and we realized that a lot of what we needed to get done, we could not do ourselves. Over the past couple of years, we’ve had to wait on other people. Pursuing the federal historic designation is an example. This is not a project just any developer, possibly one with a lot of experience, looking exclusively at the bottom line, would be interested in pursuing. But now we’re ready to begin construction.”

Bob Darden, a Baylor University journalism professor heavily involved in the Black Gospel Music Restoration Project, said he dreams of a renovated St. James becoming a concert venue, or maybe home to an African American and Hispanic museum of Central Texas. Whatever it becomes, he is relieved the Murphys rescued a gem of a building, a “charming, marvelous place” that was in danger of becoming only a memory, Darden said. Attendance had slipped to 30 or fewer on good Sundays, and the congregation struggled with upkeep costs and poor accessibility, a church official said at the time of the sale.

“I clearly sound like a televangelist when I talk about St. James, but it has such a wonderful history, and is so dear to the heart of black Waco,” Darden said. “This designation doesn’t necessarily pay the bills, but it is good that other people recognize its historic value. … It has a number of artistic qualities, stained glass windows that were common to a place and time, that need immediate restoration, or they will be gone forever.”

Amy Murphy, a social worker and part-time lecturer at Baylor University, said she, like her husband, takes students on visits to St. James.

“It has been a place of racial reconciliation, a place that has stood through so much of Waco’s dark past,” she said. “It can serve as motivation for us to have a hopeful and peaceful future.”