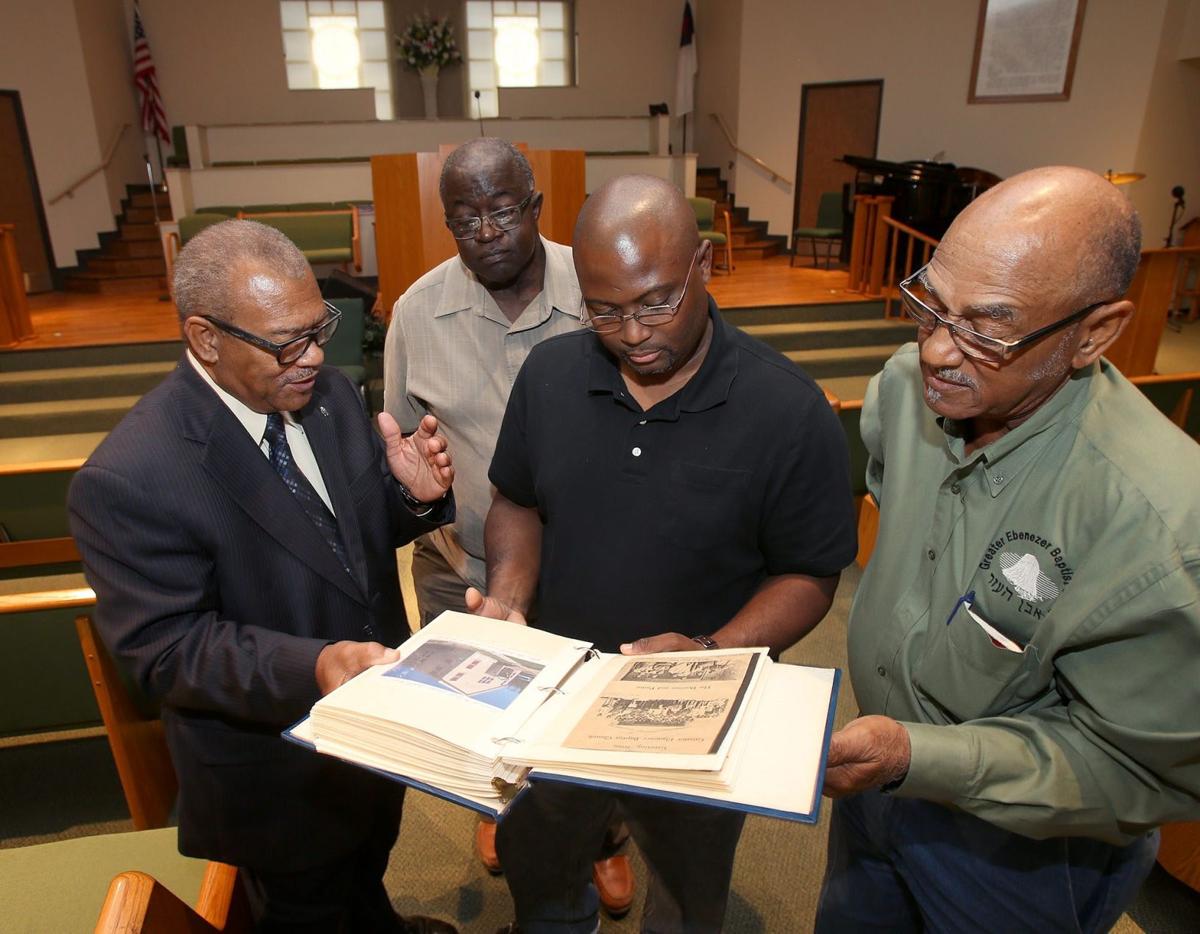 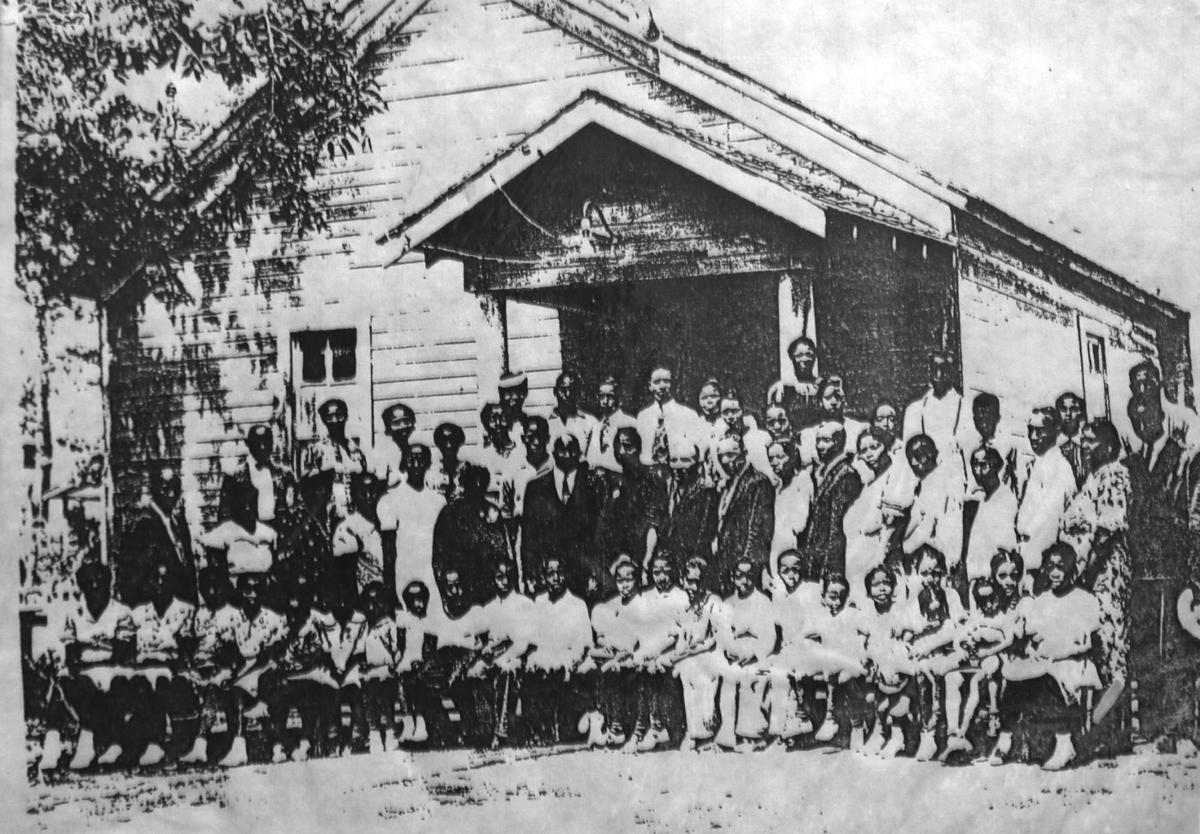 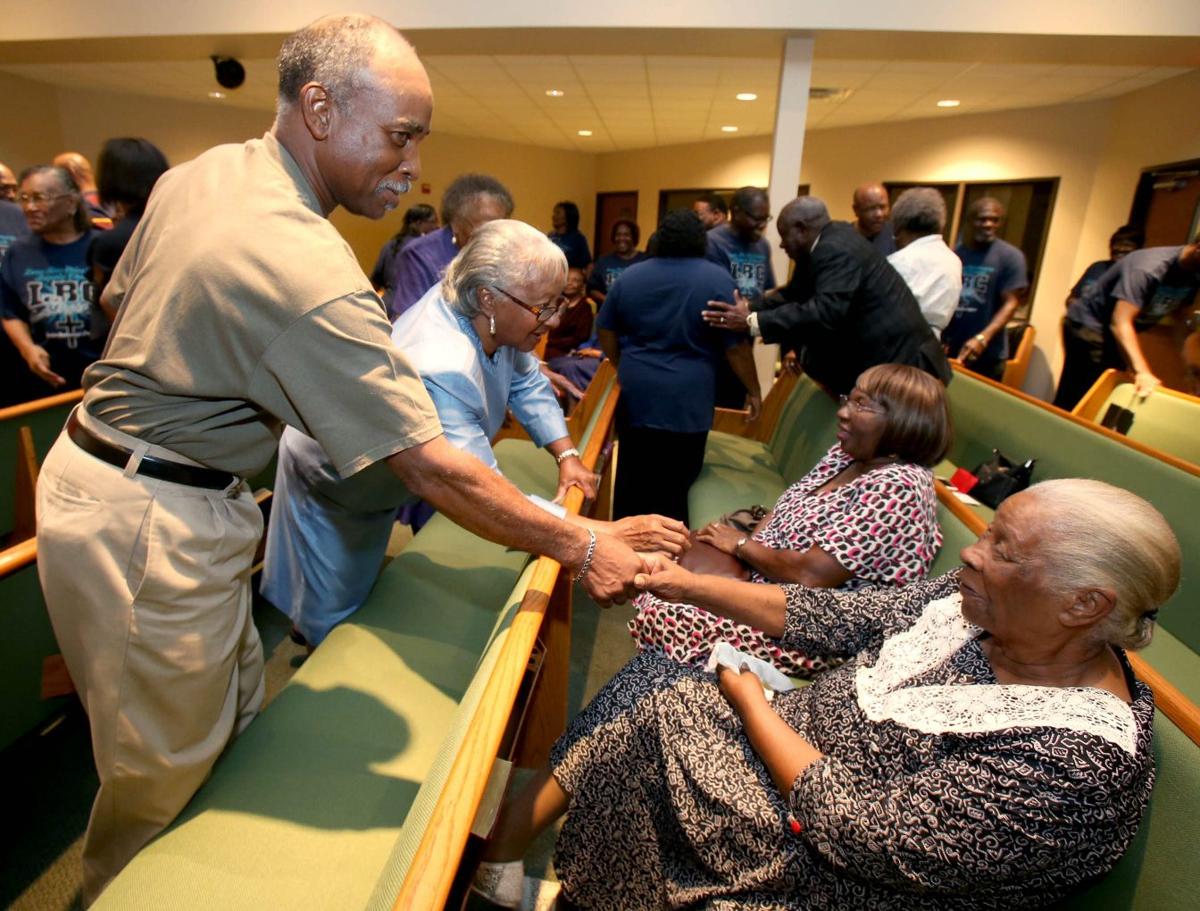 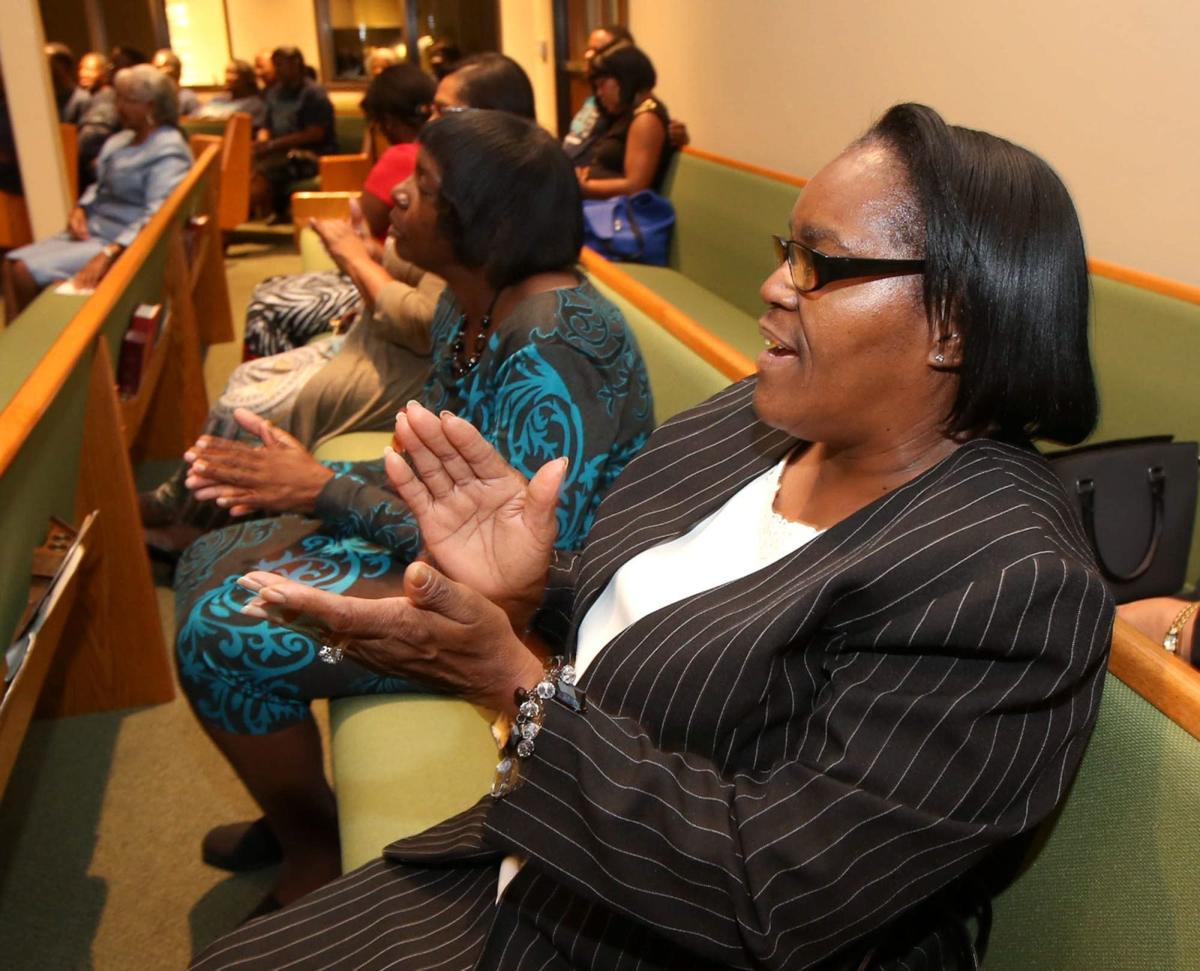 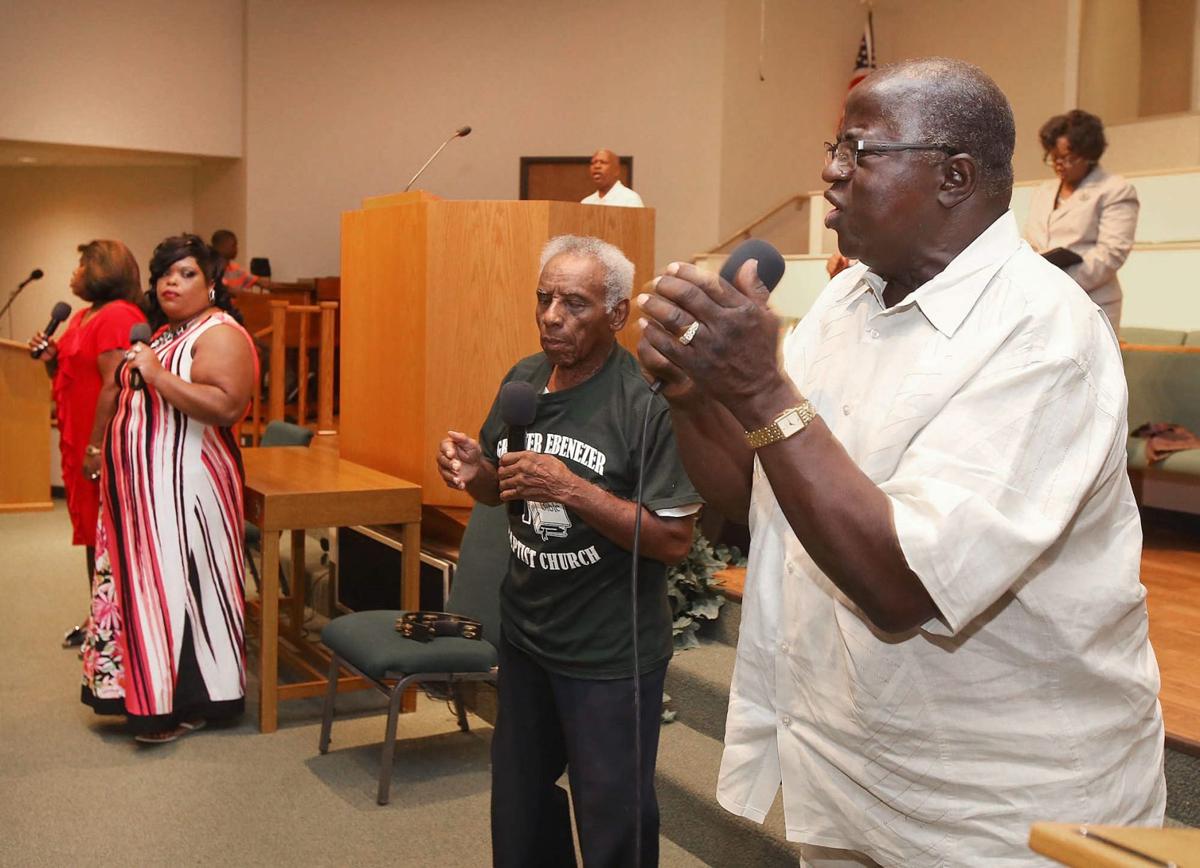 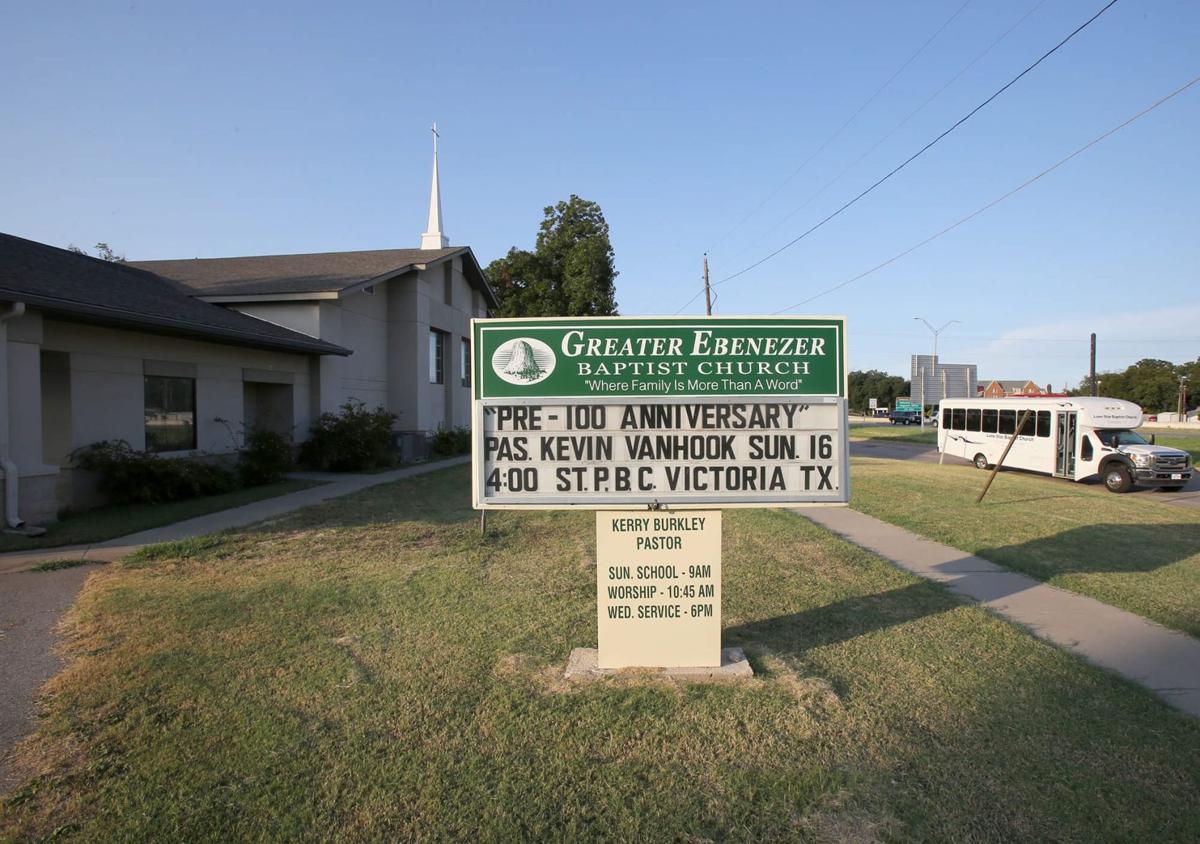 A photo from a church scrapbook shows the old building after it was renovated and bricked in the late 1960s.

Outside Greater Ebenezer Baptist Church at 919 Dutton Ave. the ears are assaulted by restless, relentless change.

A river of cars and diesel trucks thunders by on Interstate 35. Next door, nail guns blaze away on a new burger joint. Across Ninth Street, boarded-up houses wait for bulldozers to turn them into clean lots for student housing and fast food.

But step inside and you’ll find a congregation that sees its longtime location as something more than desirable real estate.

“This is holy ground,” says Deacon Bennie Neal Jr., who has attended this historically black church all his 75 years.

Others in the congregation of 220 feel the same as they celebrated their 100th anniversary during the past week with a multi-day revival.

The older ones saw a superhighway built at their doorstep in the ’60s, and now see the orange stakes in the front lawn, marking I-35’s expansion area. They have watched the decline of a tight-knit neighborhood where many of them grew up, and have seen land all around them sell to developers.

But their site is not for sale. The congregation moved here from East Waco in 1924 and built a new church building in 2008 under the leadership of its current pastor, the Rev. Kerry Burkley. In recent years, the church has turned away inquiries from real estate buyers interested in redeveloping the corner.

“This property is wanted by a lot of folks,” said Deacon Elroy Cross, who grew up near the church on Ninth Street, son of a housekeeper. “We don’t expect them to understand. Our mothers and fathers picked cotton, chopped cotton, put nickels and dimes together to build that first church.”

Cross, 68, acknowledges the big changes in the surroundings since he was a boy.

“We’re not a regular neighborhood anymore,” he said. “Back in the day we were the center of a community. The community had a relationship with the church.”

In those days before I-35, Dutton Avenue was the main drag, and the mostly unpaved streets around it were packed with small houses and corner stores. Families would walk to church from the South Waco neighborhood, joining others who had walked from farther reaches of Waco, or even country towns such as Downsville. Dressed in their Sunday best, they would settle in for an entire day of singing, preaching and fellowship.

“The singing started as soon as you got to church,” said Deaconess Mable Cobb, recalling how the older ladies would strike up a capella versions of “What a Friend We Have in Jesus” and “Guide Me Over Thou Great Jehovah.”

As a boy, Bennie Neal came in from North Waco, but he felt something powerful as he approached the doors of that wood-framed building on Dutton.

“When I came down here, you could feel the Holy Spirit,” he said. “You could hear those women’s heels clicking on the wood floors. Hear the humming and singing before we got there. People in a hurry to get there. When you got there the church was packed. The women had on their gloves and hats, like they were dressed to kill.

“I was a young kid at that time. I remember exactly where I was when I got saved. I was sitting on that front mourner’s bench. The pastor, J.L. Lee, took us around behind the church to the baptism pool, and then they wrapped me in a sheet. That night they gave me the right hand of fellowship. I ain’t forgot none of that.”

Neal still remembers every corner of that old wood-frame church building, which was built in 1924 and substantially renovated in 1940 and wrapped in brick in 1969. Notable for its red windows — bought at a time when stained glass was too expensive for a working-class congregation — it was razed to make way for the new million-dollar building, complete with stained glass.

The beginnings of the church were even humbler.

In 1915, the Rev. J.S.A. Trowser organized a church of 11 members at a little house at 117 Oak St., right next to an Elm Street cotton gin where several members worked. The Oak Street Baptist Church grew and by 1918 was able to pay Trowser a salary of $17.50 a week.

In 1924, the church was renamed Ebenezer Baptist Church as it moved to Dutton Street and began growing one lot at a time as the congregation could afford. Around 1940, Trowser passed the pulpit to the Rev. J.E. Deckard, who served seven years. Since then, seven pastors have led the church: J.L. Lee, W.D. Mims, G.B. Booker, Richard Carter, Gregory Griggs, Michael Walton and Burkley, who started in 2005.

Burkley, a Truett Seminary graduate who also is program director of the Waco Children’s Advocacy Center, is the son of a Central Texas minister. He remembers coming to Greater Ebenezer when his father was a guest preacher there and sensing the history and community of the church.

He said the church maintains a strong sense of community despite the decline of the adjacent neighborhood.

“The interesting thing about this church is that even though the generations are progressing, the integrity of Greater Ebenezer has not changed,” he said. “We are serious about our relationship with God, our commitment to faith and for being a stone of help for people.”

“Stone of help” is the meaning of the Hebrew name “Ebenezer,” and Burkley said it fits the church well. In the Old Testament, the prophet Samuel sets up a stone monument by that name to commemorate a place where God has helped his people.

Sitting in the sanctuary on a rainy day this past week with his fellow deacons, Elroy Cross said he hopes Greater Ebenezer Church will remain a monument for generations to come.

“We’ll be here until God tells us otherwise,” he said, and the people said amen.

To best view this map, use a laptop or desktop computer, or a mobile device browser in "desktop" mode.

On a downtown block dominated by big construction, a tiny house is turning heads.

The Panera Bread chain, known for its selection of soups and sandwiches, wants to place a second location in Waco and is considering the lot a…

Change is coming quickly to the low-income neighborhood across Interstate 35 from Baylor University, and neighbors are looking on with mixed feelings.